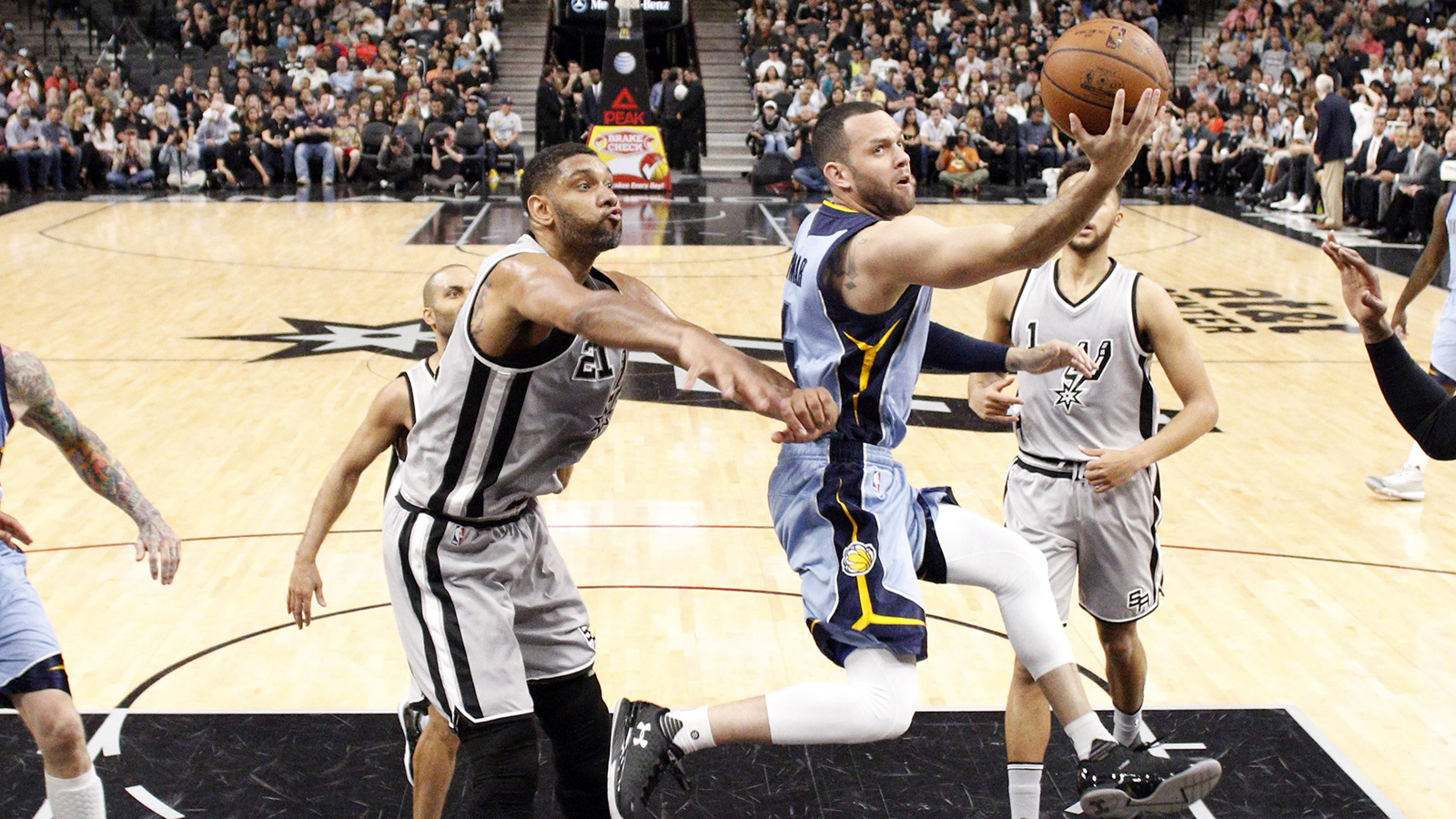 The Grizzlies’ reward for being Win No. 73 for the Golden State Warriors? A first-round date with the San Antonio Spurs, the league’s clear-cut second-best team, in the Western Conference’s 2-7 matchup.

Boasting an 11-18 record after the All-Star break and a patchwork roster that needed every win it could manage down the stretch, the Grizzlies have lost four of their five starters from their season opener against Cleveland. That is not an preferable formula going against a 67-win team that bested the historic Warriors in net rating and finished a fraction of a point behind them in point differential. It’s a David v. Goliath narrative wrapped in a professional playoff package.

At the trade deadline, the front office could see the writing on the wall and sent Courtney Lee to Charlotte and Jeff Green to Los Angeles for draft pick-heavy returns. That left coach Dave Joerger to mix-and-match his available pieces: The Grizzlies are the first NBA playoff team to ever deploy 28 different starting lineups.

The results were, as expected, ugly, but surprising wins over the Cavaliers, Clippers and Bulls kept them just ahead of the Rockets and Jazz in the playoff picture.

Now, the pressing question: How can a team that dropped 10 of its final 11 games, including two against the Spurs, turn around and compete against a talent-laden juggernaut led by the NBA’s preeminent coaching mind? Throw in the fact that San Antonio has homecourt advantage — a place where only the team with the best regular-season record in NBA history could beat them — and this is could get lopsided quickly. Over that final stretch of 11 games, the Grizzlies posted the third-worst net rating in the league (only the Lakers and Nets were worse) as opponents effectively shot 56.4 percent from the field and reached the free-throw line at will.

The positive news: Joerger’s group made the field and they’ve shown the propensity to play better against top competition, as they did even in two April losses to the Raptors and Warriors. Still, this is a monumental task. Memphis will need all it can get out of the likes of Lance Stephenson, Matt Barnes, Jordan Farmar and Vince Carter … just to steal one game.

Zach Randolph: It’s telling that three of the top four Grizzlies in win shares played fewer than 60 games: Conley, Gasol and Chalmers. The lone holdover is Zach Randolph, the 34-year-old bruiser who has helped define this franchise’s identity over the past seven seasons. Randolph spent time coming off the bench for Joerger’s group earlier in the season, but injuries forced him back into a more prominent role.

Randolph played just one game against San Antonio’s stingy defense this season, and he scored just nine points in a 20-point drubbing. Without Randolph’s scoring, Memphis can expect more of the same. The veteran big man stepped up in higher-profile games this season — his four best outings, according to game score, came against playoff teams, including his first career triple-double against the Clippers — and he largely maintained his scoring average on a per-minute basis. He will be called upon early and often.

Kawhi Leonard: The NBA’s best two-way player, Leonard has become the next step in the 3-and-D evolutionary chain. Positioned to win his second straight Defensive Player of the Year award — Golden State’s Draymond Green is his only true challenger in the category — the 6-foot-7 superstar shouldered a career-high 25 percent of the offensive workload as Gregg Popovich continues to place more and more trust in him. He responded by hitting 44.3 percent of his 3-pointers and becoming the best player on an absolute juggernaut.

In terms of averaging 21 points per game and posting a 96 defensive rating or better, Leonard joined elite company this season. The only players to hit those marks this century: Dwight Howard, Kevin Garnett, Chris Webber and Tim Duncan.

(And if you want to add 40 percent shooting from 3-point range to the criteria, there’s only one other player in NBA history: Larry Bird in 1980.)

96.6: The San Antonio Spurs boast one of the top defenses in recent memory. They held opponents to just 96.6 points per 100 possessions over the course of 82 games, the best mark over the past three seasons.

47: The Grizzlies’ offense fell off tremendously after losing the likes of Conley and Gasol. After the All-Star break, Memphis effectively shot just 47 percent from the field, the second-worst mark in the league and just ahead of the Los Angeles Lakers.