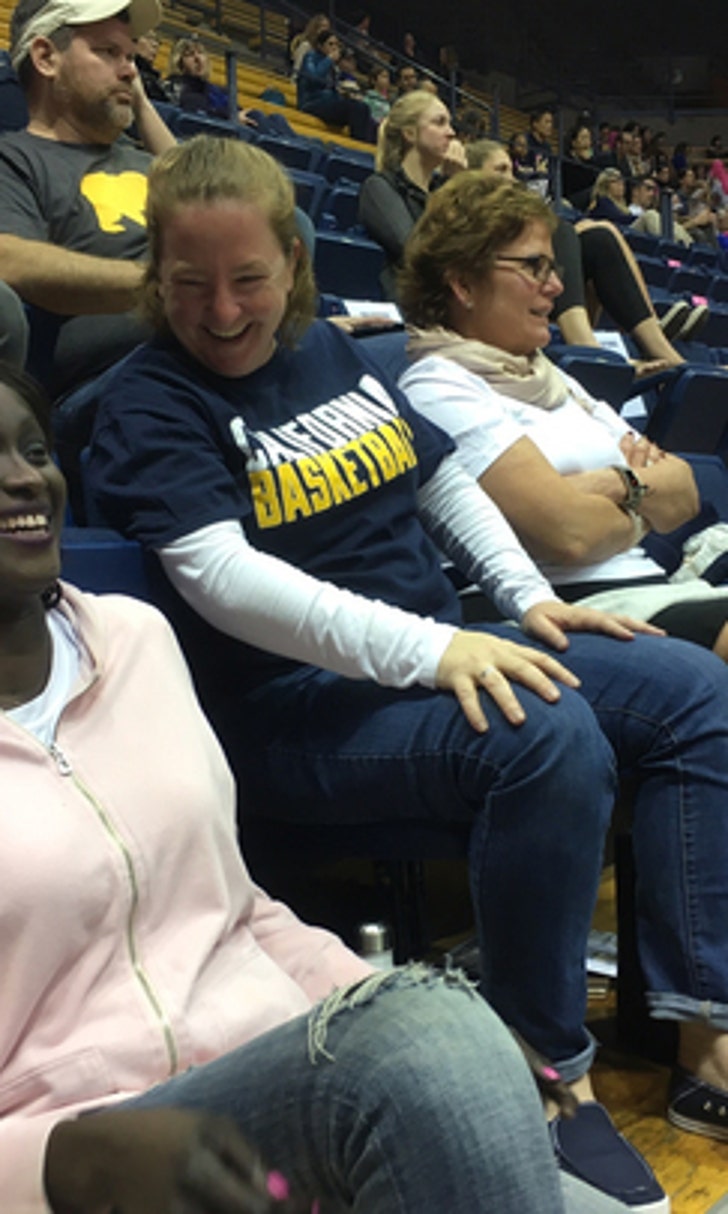 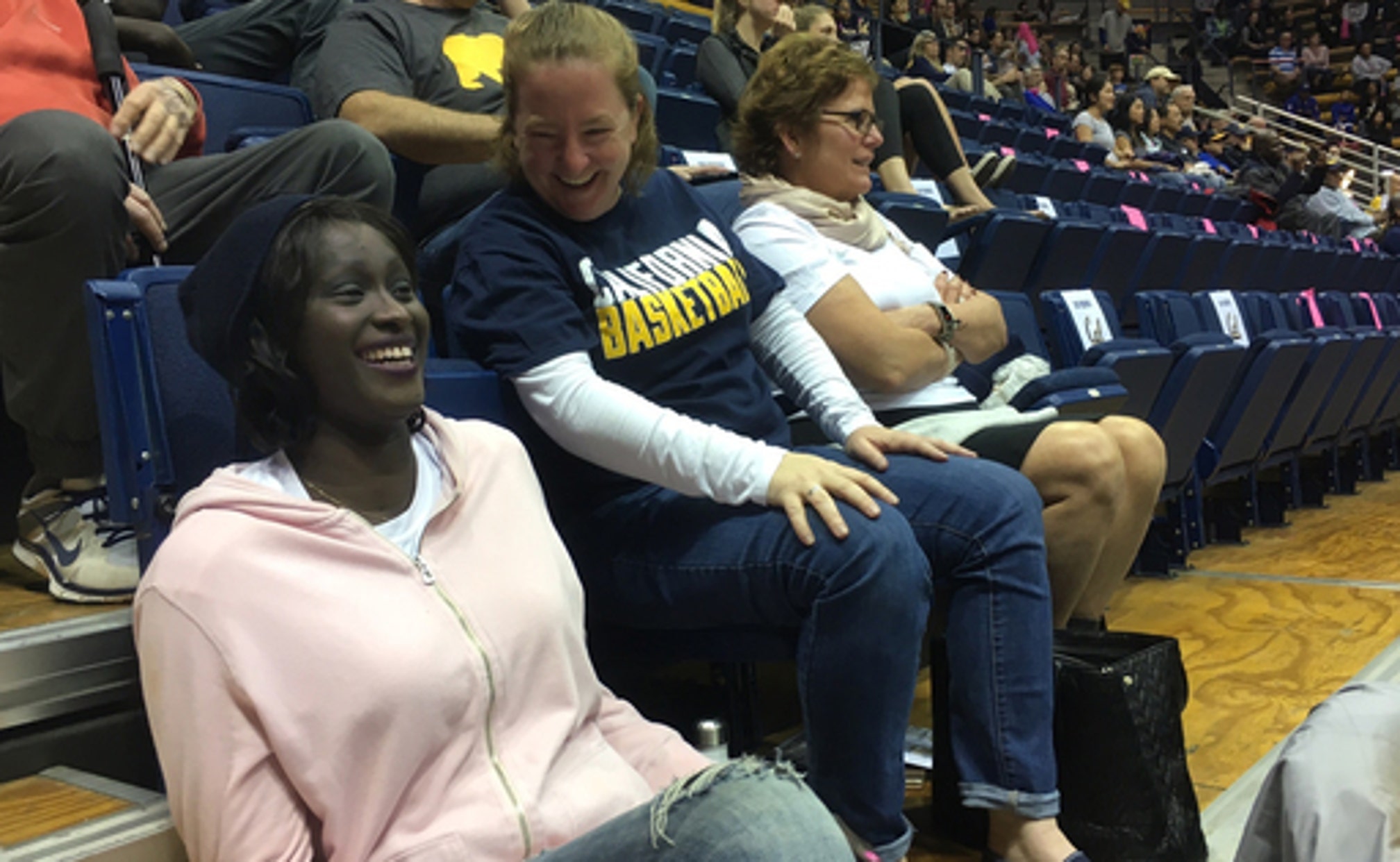 BERKELEY, Calif. (AP) At first, Rama N'diaye kept a secret from her loved ones and entire support system last summer: She had breast cancer.

Privacy is the cultural norm back home in Senegal, yet N'diaye quickly realized she would need everybody cheering her fight. She gathered the courage and reached out to former California basketball staff member Sarah Holsinger, now at Virginia working as associate athletic director of basketball administration for Joanne Boyle, the coach who recruited N'diaye to Berkeley over a decade ago before leaving for Charlottesville.

It was at wedding last August in Santa Barbara of another ex-Cal basketball employee when Boyle and Cal athletic trainer Ann Caslin began discussing what former players were up to and Boyle shared the news of N'diaye's diagnosis. Caslin had a five-hour drive home to the Bay Area and knew there must be some way to help, and it hit her - ''Rebounds For Rama.''

She sprang into action with coach Lindsay Gottlieb and others. Their efforts on pledgeit.org had raised more than $12,000 as of Sunday, and Caslin expects that amount to grow with games still to be played and more rebound pledges to add to the total.

''When I heard it from Ann, I was overjoyed,'' said the 30-year-old N'diaye, who is already receiving some of the money to cover medication and day-to-day expenses. ''I didn't expect it at all.''

On Sunday, N'diaye listened from near the back of the team meeting room as Gottlieb fired up her team to face Colorado with an emotional speech about accomplishing something together, for one another.

''This is real life!'' Gottlieb said, pointing at N'diaye then pulling her team together for a huddle before breaking down into tears. She and N'diaye embraced.

Diagnosed last July with Stage 2 breast cancer, N'diaye had been playing regular pickup basketball six months earlier when she first felt a small lump in her right breast. Doctors initially figured she had been hit in the area and sent her home to take ibuprofen. Months later, the lump had grown and she began to have discomfort in her armpit area and went for further testing.

N'diaye sported pink Converse sneakers Sunday with a light pink hoodie, fingernails painted in pink and even pink earrings for the occasion celebrating not only her but also the legacy of the late NC State coach Kay Yow through Play4Kay. Pink ribbons were handed out at the arena.

When N'diaye first heard of a fundraising effort on her behalf called ''Rebounds For Rama,'' she knew right away Caslin was behind it. There have been good and bad days through her ordeal, but ''that day was a great day.''

From Berkeley to Virginia and beyond, N'diaye has a cheering section rooting for every Cal rebound that raises money for her fight. She had been working as a hairstylist in San Diego before her diagnosis and the start of an aggressive treatment regimen that included 12 rounds of chemotherapy she recently finished. She is feeling better but not working again.

''It took longer than I thought,'' Caslin said of starting the campaign, ''but we had to make sure not to negatively affect Rama.''

N'diaye left her native Senegal at age 14 to play in Japan and improve her game to reach the college level in the United States. It was during a foreign tour to Senegal while coaching Cal that Boyle decided to adopt a child from the African nation, and she brought home daughter, Ngoty, for Christmas in 2014 .

Boyle has been in awe of N'diaye's strength through all of this.

''Again just a young woman with an incredible amount of strength. If you watch her play and her journey in her life, to leave her home country at the age of 14 or 15 and travel all the way to Japan just to go to school to kind of better her life and her family's life, I think that speaks volumes to who she is as a person and the strength that she has,'' Boyle said. ''So her battling this disease so courageously and very much a private person and not wanting to be front and center, but after while realizing how much a voice she can give to cancer, breast cancer, and awareness and early detection.''

N'diaye has been undergoing treatment at UC San Diego. She is scheduled for a double mastectomy later this month then, later, breast reconstructive surgery.

The tumor is gone and doctors hope she won't need further chemo, but that will be better known after the operation.

Joined by former Cal teammates, Caslin and her younger brother, Karim, for a halftime presentation Sunday, N'diaye waved and wiped away tears as she received a standing ovation from the crowd. She was presented flowers from Boyle.

A ''very private'' person by her own definition, N'diaye took the microphone and offered a simple thank you.

In the quiet of the training room, where she spent many hours after a devastating knee injury during her Cal career from 2006-11, she reflected.

MSU, KU Reign Supreme at Champions Classic
Michigan State earned its first-ever win over Duke at Cameron Indoor Stadium, and Kentucky stayed cold in a loss to Kansas.
19 hours ago

Happy Thanksgiving To The People
Before picking which sports stars should join the Thanksgiving dinner table, Charlotte Wilder thanks you, the sports fan.
6 days ago
those were the latest stories
Want to see more?
View All Stories
Fox Sports™ and © 2020 Fox Media LLC and Fox Sports Interactive Media, LLC. All rights reserved. Use of this website (including any and all parts and components) constitutes your acceptance of these Terms of Use and Updated Privacy Policy. Advertising Choices. Do Not Sell my Personal Info