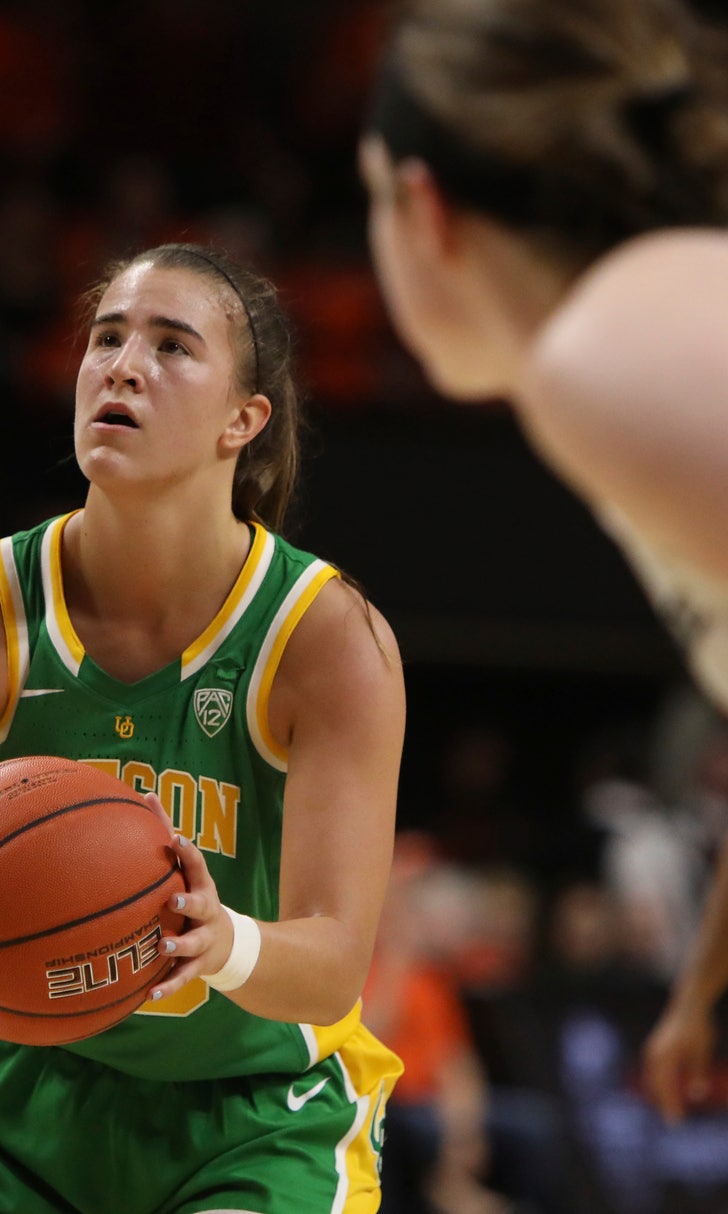 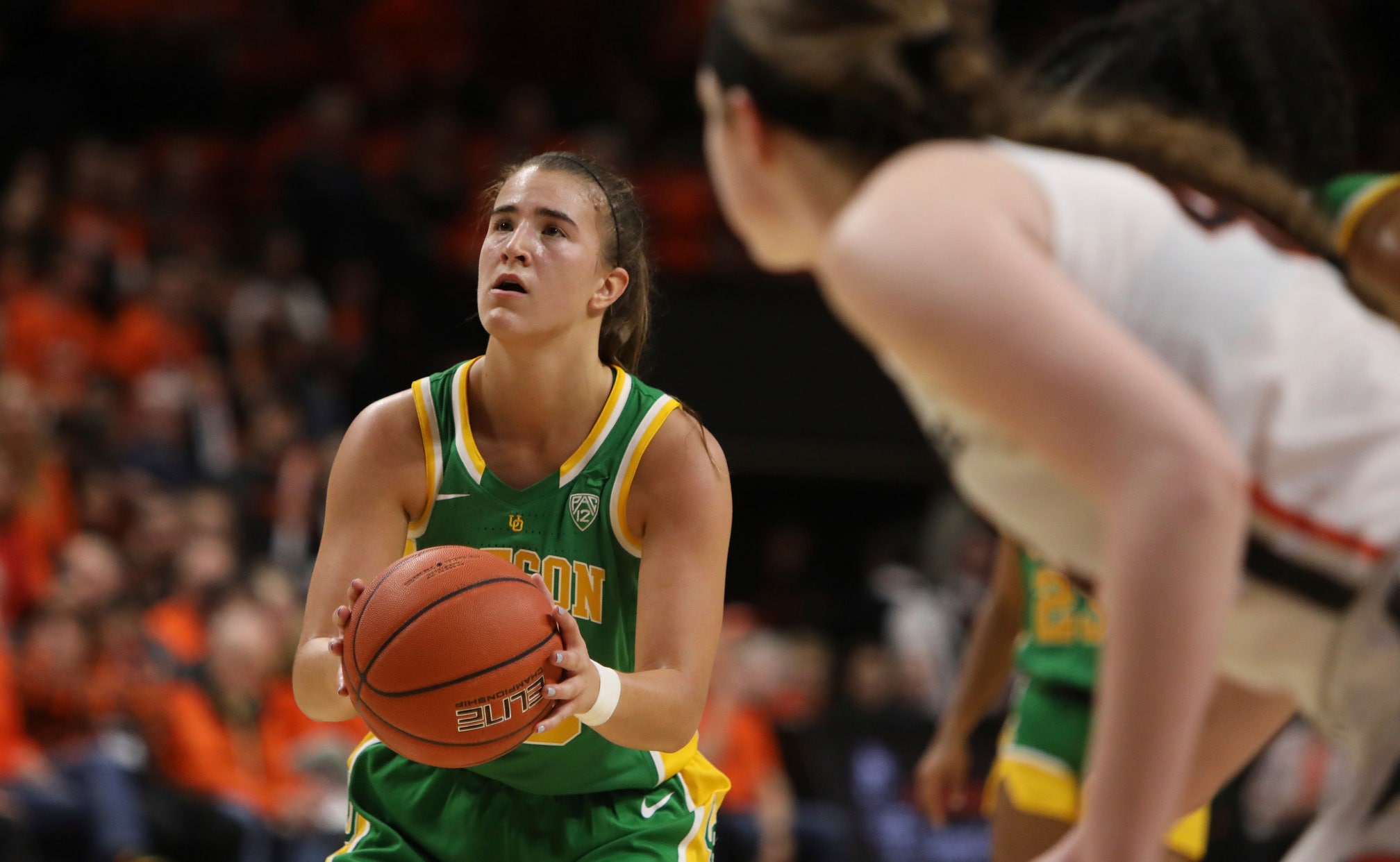 Oregon, which won Friday’s game 76-64 in Eugene, swept Oregon State for first time since the 2009-10 season, a year before coach Scott Rueck became the Beavers’ head coach and began to turn the program around.

Ionescu was emotional after the game in a TV interview about the death of Kobe Bryant, who had mentored her.

“Everything I do, I do it for him. This season is for him,” she said.

LOUISVILLE, Ky. (AP) — Louisville saw six players score in double figures Sunday as the No. 5 Cardinals cruised to a victory over Pittsburgh.

The two teams came into the Yum Center heading in opposite directions, and a 14-0 first quarter run for the Cardinals (20-1, 9-0 Atlantic Coast Conference) ensured they continued on their respective paths. Louisville won its 12th straight, while the Panthers (3-16, 0-8) suffered their 12th straight loss.

Dana Evans, Kylee Shook, Bionca Dunham and Elizabeth Balogun all had 12 each for the Cardinals. Jazmine Jones added 11, and Elizabeth Dixon pitched in 10 off the bench.

Fellow freshman Hannah Jump added 14 points as four others scored in double figures for the Cardinal (18-2, 7-1 Pac-12), who made 5 of 12 3-pointers in their decisive third quarter that put them ahead 55-38 going into the final 10 minutes. Stanford then shot 12 for 16 in the fourth.

North Carolina cut its deficit to 45-43 midway through the third quarter, but the Wolfpack answered with a 13-2 spurt to regain control.

The victory for the Bulldogs was the largest in the longtime series, besting the 31-point wins they had in each of the last two years.

The Rebels (7-13, 0-7 SEC) scored double digits in just one of the four quarters in the game. Mississippi State led 30-6 at the end of the first quarter and the rout was on. The Rebels turned the ball over 23 times and were outrebounded 41-28 in the loss.

CHICAGO (AP) — Lexi Held hit five of DePaul's season-high 18 3-pointers and the Blue Demons rolled to a win over Georgetown.

Stonewall had eight rebounds, Campbell had seven rebounds and eight assists and Church had three steals.

Florida State closed the first quarter with a 7-0 run to grab an 18-10 lead. The Hurricanes battled back behind a couple of 3-pointers from Kelsey Marshall, the second tying the game at 22. But from there the Seminoles outscored Miami 18-4 for a 40-26 lead at the half.

The lead never dipped below 11 after that stretch where the Çanes made just 1 of 10 shots.

Wells made 5 of 14 shots from the floor and all six of her free throws for the Aggies (17-3, 5-2 Southeastern Conference), who led 33-22 at halftime and broke the game open with a 22-11 third-quarter run. Jones finished with 10 points and 13 rebounds before fouling out, while Shambria Washington scored 11 with seven assists. Ceira Johnson added 10 points before also fouling out.

Warnock came off the bench to shoot 8 of 11 to better her previous high of 14 points and also matched her personal best of 10 rebounds. Kathleen Doyle made seven steals and added 20 points.

Taryn McCutcheon scored 12 points and Nia Clouden scored 10 to lead the Spartans but combined for only three points in the second half.

Following the game, a season-best crowd of 13,420 watched as Iowa retired the No. 10 jersey of Megan Gustafson, just the second Hawkeye to receive such an honor following Michelle Edwards in 1990.

Taylor Mikesell scored 14, and Ashley Owusu and Blair Watson had 13 points apiece for the Terrapins, who took charge with a 12-5 run in the fourth quarter after the Wildcats closed to 48-46.

The game was a rematch of a Dec. 31 meeting in which the Wildcats rolled to an 81-58 victory. Maryland was 8-0 against Northwestern before this season.

Lindsey Pulliam scored 20 for the Wildcats (17-2, 7-2), who came in with a five-game winning streak and a share of first place with Iowa, which faced Michigan State later Sunday.

The Razorbacks (16-4, 4-3 Southeastern Conference) have won three of their last four.

Tennessee took the lead for good after Davis scored six straight points in the final minute of the first half. The Lady Tigers stayed within single digits and trailed 58-55 with 1 1/2 minutes left before Tennessee's Jazmine Massengill hit a short jumper and Davis, with 16 seconds left, made two free throws.

The Lady Vols (16-4, 6-1 Southeastern Conference) won their fifth straight conference matchup, coming in the “We Back Pat” game which culminates a week-long effort among the SEC teams to bring awareness to the Pat Summitt Foundation and its work against Alzheimer's disease. Summitt, the late Hall of Fame coach for the Lady Vols, died at the age of 64 in 2016.

All of Arens' five field goals were 3-pointers. She also had seven rebounds and three blocks. Duffy was 7 of 10 from the floor with five assists. Madison McKeever added 14 points and Hannah Sjerven 11 points and seven rebounds. The Coyotes shot 52%, including 10 of 22 from the arc for 45.4%.

Tynice Martin tied her career high with six 3-pointers and matched her season high with 24 points for West Virginia (13-5, 3-4).