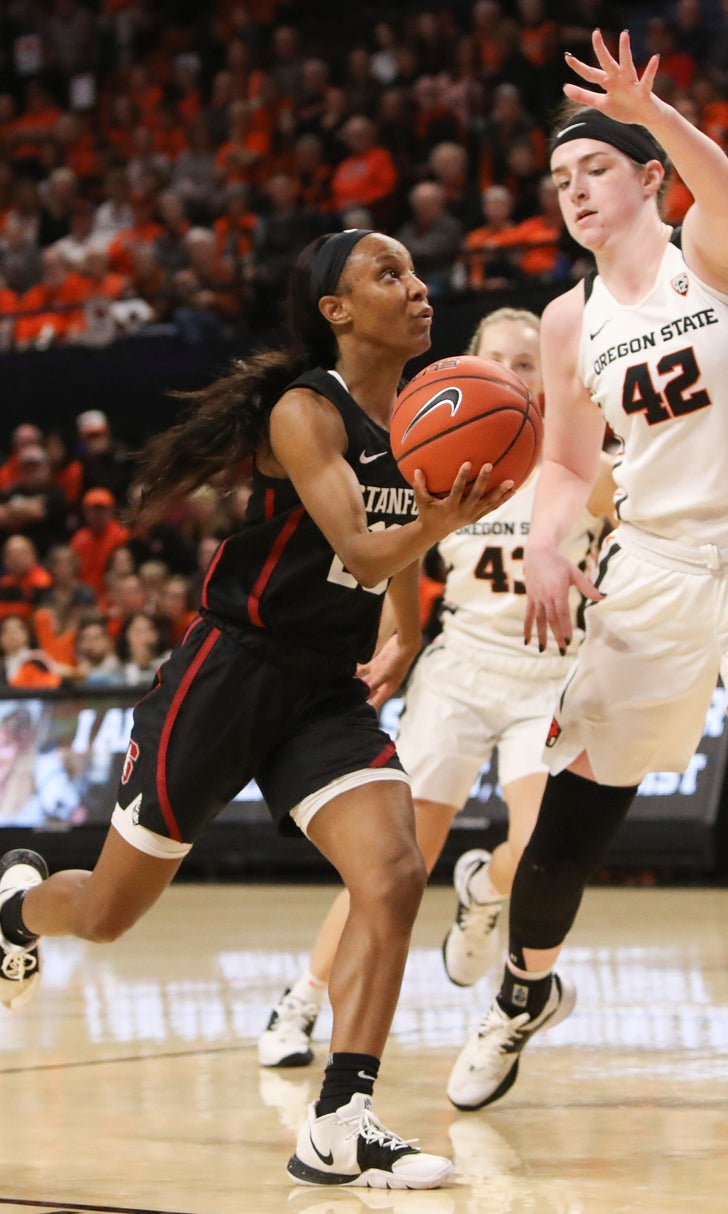 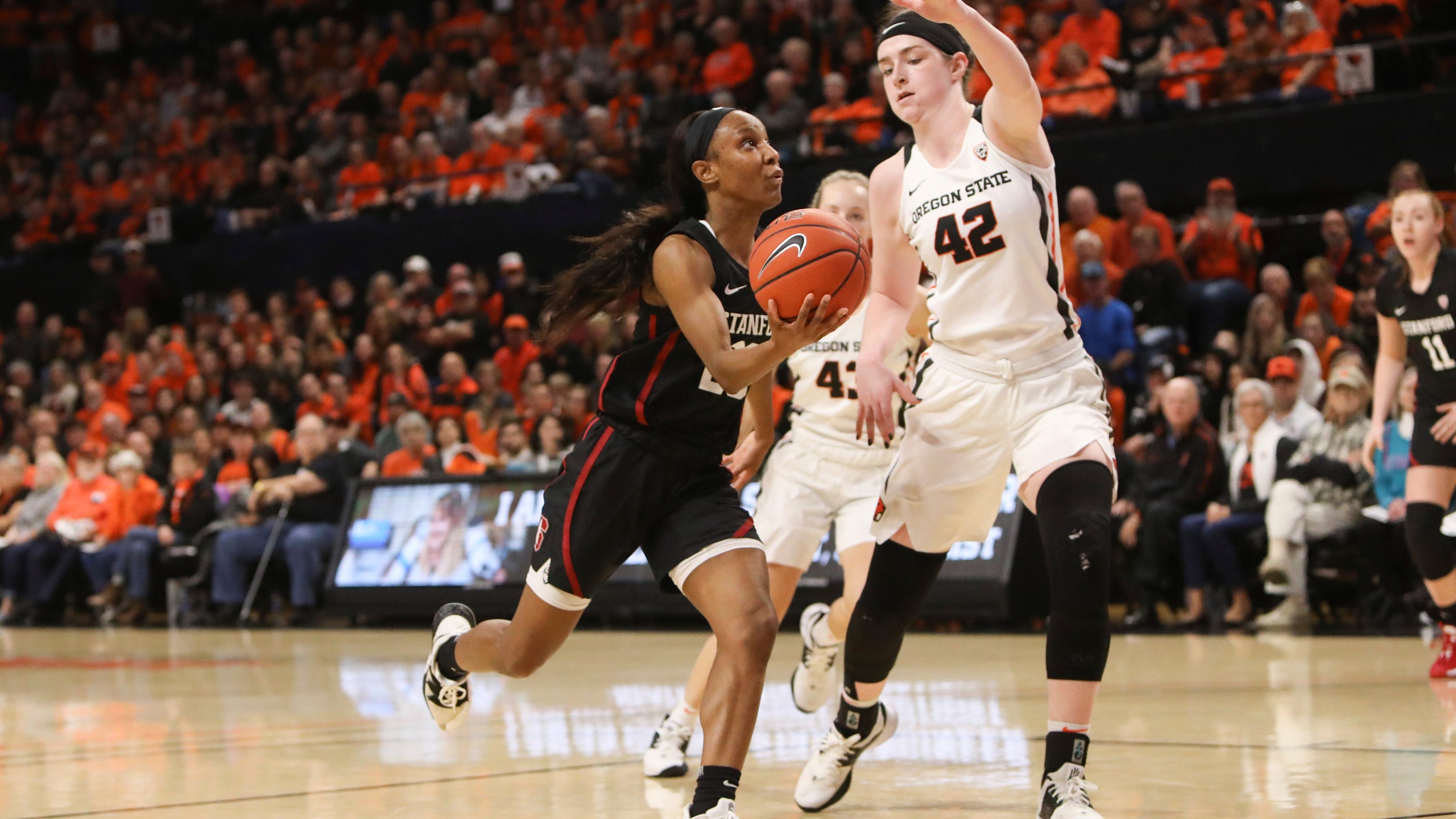 CORVALLIS, Ore. (AP) — Kiana Williams said Stanford didn't get as rattled this time, sticking to the game plan even when Oregon State took an early lead.

Williams scored 17 points and Lexie Hull added 14, and the No. 3 Cardinal outlasted the eighth-ranked Beavers 61-58 on Sunday.

Hull also had nine rebounds for Stanford (16-2, 5-1), which rebounded from its first conference loss on Thursday to Oregon.

Williams said she thought Stanford let the crowd in Eugene propel the Ducks. Against the Beavers, a first-half deficit wasn't as big a deal.

“We just played ourselves out of it,” she said.

Trailing 44-42 heading into the final quarter, Oregon State took a 48-46 lead on Slocum's step-back jumper before Aleah Goodman's 3-extended it. Lexie Hull's layup and Williams' jumper got Stanford back within a point.

After Kat Tudor's free throw for the Beavers, the Cardinal tied the game at 52 on Ashten Prechtel's layup with 5:34 left. Williams' 3-pointer gave Stanford the lead but Slocum answered with a 3 for the Beavers.

Lacie Hull's 3 put Stanford back in front with 3:46 left. Both teams went scoreless down the stretch, but after Lexie Hull missed a layup Mikayla Pivec got the defensive rebound, giving the Beavers a chance. Slocum missed a layup with 16 seconds left and Williams made free throws that all but sealed it.

“We had to really battle to win this game,” Stanford coach Tara VanDerveer said. “I'm exceedingly proud of our whole team, but we had some great effort from Kiana — a great floor leader, made big plays over and over, played great defense for us.”

Stanford was coming off an 87-55 loss at No. 6 Oregon which likely means a shakeup when the new rankings come out on Monday.

Oregon State was energized at the start, taking an 13-2 lead as Stanford struggled, making just one of their first seven shots from the floor. Slocum had 11 points and the Beavers led 21-16 lead after the opening quarter.

And 8-0 run pushed Oregon State's lead to 29-19, but three straight 3-pointers pulled Stanford within a point with 3:09 left in the half. Lexie Hull's jumper gave the Cardinal the lead but Slocum made a 3 that put the Beavers up 36-34 at the break.

Oregon State struggled from the field to open the second half, going 1-of-9 as Stanford went up 42-38. But a scoring drought then hurt the Cardinal and Oregon State pulled even at 42 on Patricia Morris' layup.

Stanford was hurt late in the third quarter when freshman starter Haley Jones had to be helped off the court and into the locker room with what appeared to be a knee injury. The 6-foot-1 guard was averaging 11.6 points, 4.3 rebounds and 2.5 assists heading into the game. She scored in double figures in her first four conference games for the Cardinal, becoming the first player to do so since Nicole Powell in 2001.

VanDerveer said she'd wait for an MRI on Jones before commenting on her status.

It was Stanford's fourth consecutive win in the series, which the Cardinal lead 58-9. Stanford has not been swept by the Oregon schools since 2001.

Stanford: After the rout by Oregon, Stanford's only other loss was at Texas on Dec. 22. ... VanDerveer is 16 victories away from passing Pat Summitt as the winningest coach in women's college basketball history. ... Williams is three 3-pointers away from tying Jennifer Azzi in 10th on Stanford's career list.

Oregon State: The Beavers' lone loss going into the game was the defeat at ASU. ... Slocum's career high is 30 points. ... It was the first of three consecutive games against top 10 teams for the Beavers, a first for the team. Next week they play back-to-back rivalry games against sixth-ranked Oregon, although the rankings should shift some. ... The Beavers were coming off an 81-44 rout of California on Friday.

NO SILVER LININGS: Pivec wasn't quite ready to speak to positives she could take from the game. The senior, Oregon State's top scorer, was held to 10 points by the Cardinal.

“Not really positive right now. We just lost,” she said with tears in her eyes. “You don't want that to happen. We'll learn from the film, but right now it hurts.”