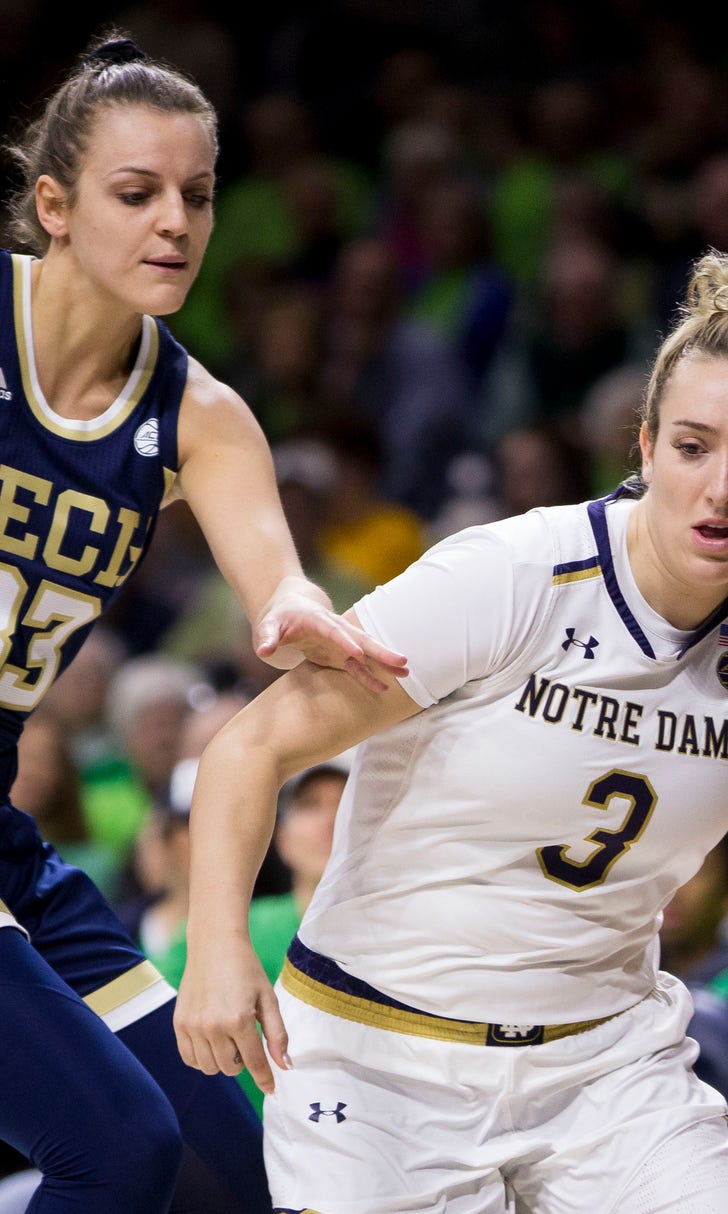 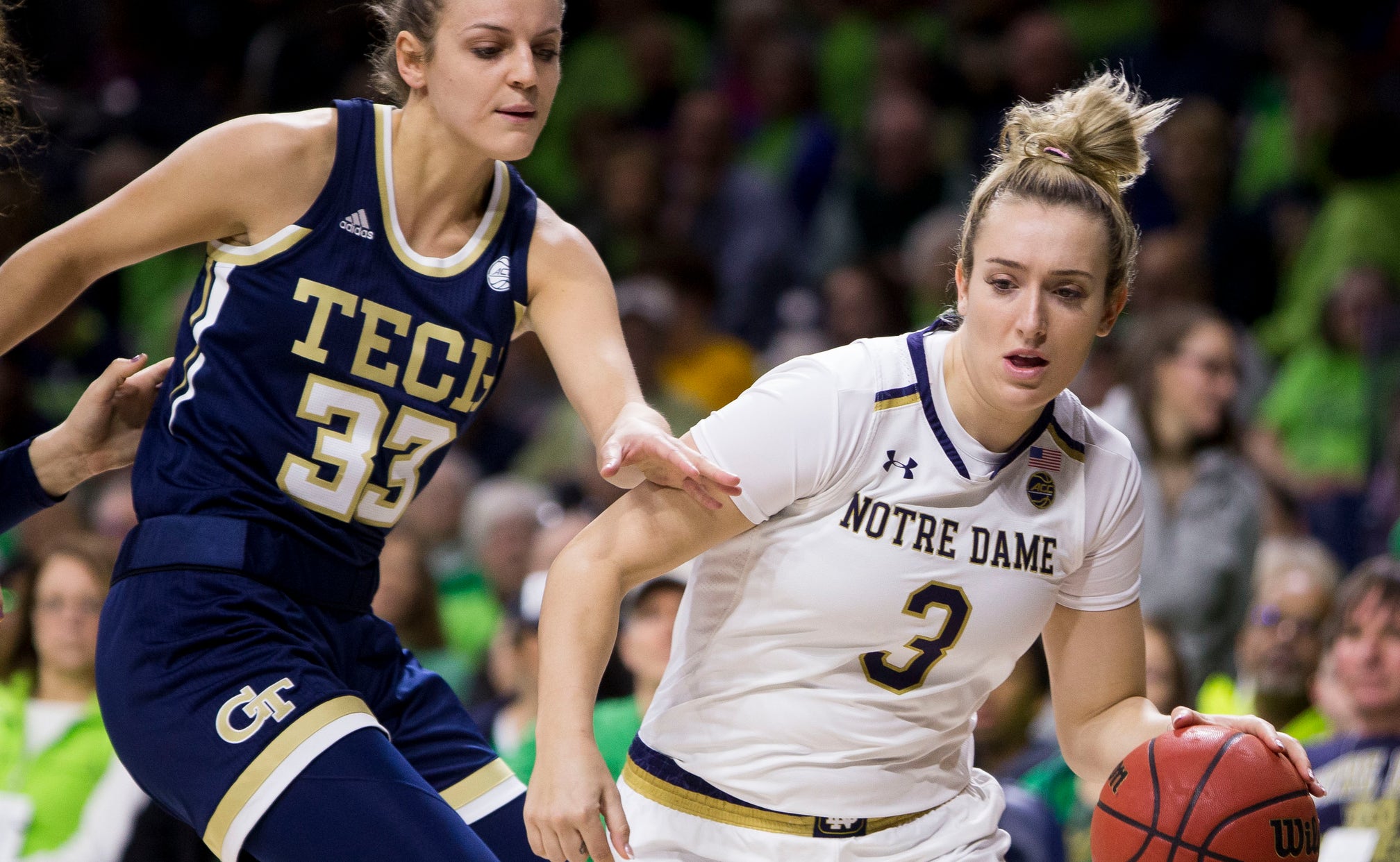 SOUTH BEND, Ind. (AP) — Muffet McGraw likes the way No. 5 Notre Dame distributes the ball. Lately, the coach has asked her team to get it more to sharp-shooting Marina Mabrey.

"We've been talking how we need to look for Marina more in transition and we've done a really good job of that," McGraw said after her senior point guard scored 20 points Sunday in a 90-50 win over Georgia Tech.

"Her spot is pretty much past half court," McGraw joked after Mabrey hit 7 of 10 shots, including 6 of 7 on 3-pointers.

Mabrey is now 27 of 46 from long distance in her last seven games.

"I'm getting pretty good passes from my teammates," Mabrey said. "They've been allowing me to get there and plant my feet, and that's a credit to them."

Mabrey is doing her share of passing, too, and had a team-high five assists.

The Yellow Jackets led 6-4 early, but Mabrey's first 3-pointer with 7:38 to go in the first quarter gave the Irish the lead for good. Notre Dame's first two runs helped to provide a 28-10 lead after the first quarter, and the Irish were six points into a season-long 24-0 run when the second quarter started.

The Yellow Jackets went 11:03 over the two quarters without scoring before Lotta-Maj Lahtinen's 3-pointer from the corner gave them their only points of the quarter at 2:52. Georgia Tech's 13 halftime points were the lowest yield by Notre Dame this season.

Georgia Tech: The youthful Yellow Jackets did not look like the same team that lost 91-90 Thursday to the same North Carolina team that beat then-No. 1 Notre Dame 78-73 last Sunday. Freshman Elizabeth Balogun, who had 35 points against the Tar Heels, went 0 for 6 from the field in the first half. She finished with seven points on 3-of-15 shooting, including just 1 of 9 from beyond the arc. Tech hit just four of 30 3-point attempts. One positive — Tech outrebounded Notre Dame 48-45 with the help of a 29-10 edge on the offensive boards.

"We've been competitive all season long," Joseph said. "I don't think we responded well to the pressure and stopping their transition. With the quick turnaround, it was tough to prepare for Notre Dame. I didn't think we could really simulate to our players what to expect. But again, I really like my team."

Notre Dame: The Fighting Irish hit 24 of their first 40 shots (60 percent) with 15 assists on the baskets. They finished with 21 assists on 33 field goals (in 59 attempts) while shooting 55.9 percent for the game. They had entered averaging 20 assists per game, sixth nationally. But the ease of the victory was tempered by sophomore forward Mikayla Vaughn's hyperextended knee injury, the same one she had ACL surgery on last season, at 4:04 of the third quarter. McGraw said she was fine but did not play her the rest of the way.

"That was a great first half," McGraw said. "I thought our defense in the first half was really terrific. We found the shooters, we rebounded and ran. We did everything we wanted to do. The second half was sloppy but we had a lot of different combinations in there."

The Irish finished with 20 turnovers, which bothers McGraw. "I think we're careless and I think we have too much confidence in each other," she said. "We're not good at helping each other out right now."

Joseph hopes her young team learned a lot from playing Notre Dame which "in my opinion, is the best team in the country."

"I'm going to use their example for my team for years to come," Joseph said. "In my opinion, they have five first-round (WNBA) draft picks in their starters (Mabrey, Young, Shepard, Ogunbowale and Brianna Turner, who had eight points, seven rebounds and five blocks Sunday). They could beat a lot of WNBA teams."

Joseph's favorite Irish player? Young, who sat out last Sunday's 78-73 loss to North Carolina with a sprained ankle. "I think she's overlooked," Joseph said. "When she didn't play, it showed everybody what she brings to the table."

Notre Dame: At Miami on Thursday.