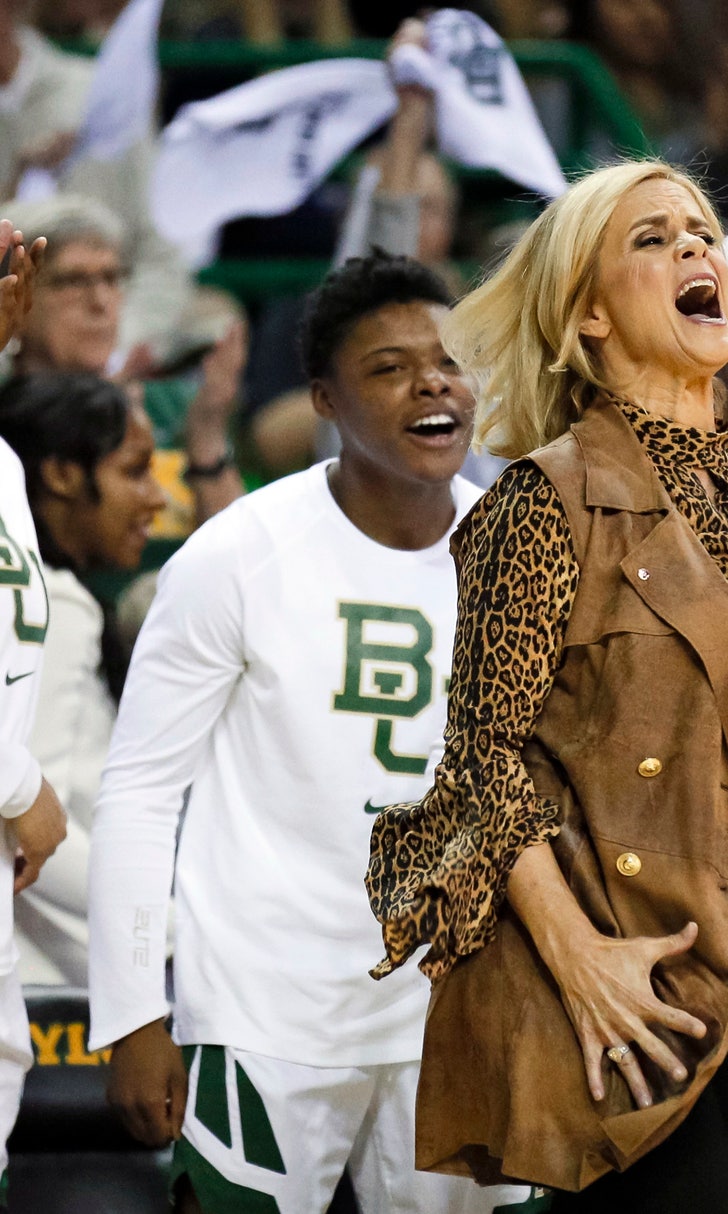 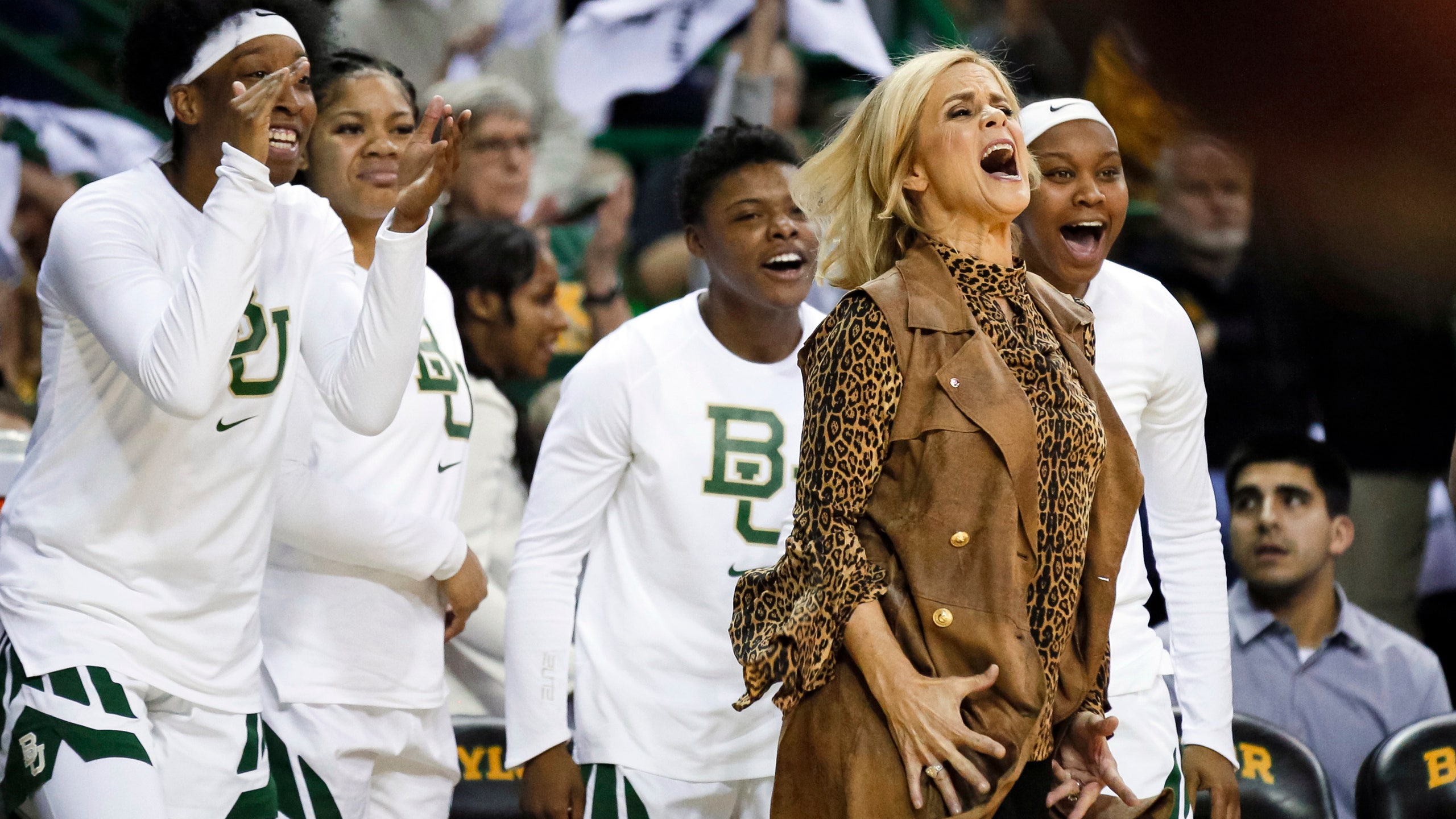 There are times when Kim Mulkey — an intense, championship-winning point guard who is just as intense as a coach — will be challenging her Baylor players or getting on them about something when one of the young guards suddenly lightens the mood in the locker room.

"In the middle of it, DiDi (Richards) will go, 'You tell 'em, Mulkey.' You know, she's got that little voice," Mulkey said. "She just cracks everybody up."

These Lady Bears certainly know how to win, and they are having fun all the way to their first Final Four since 2012. Baylor (35-1), the No. 1 overall seed, takes a 27-game winning streak into its game against national semifinal first-timer Oregon (33-4) on Friday night in Tampa, Florida.

"This is who they are. They're funny in the heat of the moment. They'll say funny stuff to each other. They relax me," Mulkey said. "They're just easy to coach."

After wearing bracelets all season with #TTT for Together To Tampa, now they have a chance to take the title.

"Everybody has been so focused all year. We're focused on this one goal and we finally got there," said junior 6-foor-4 post Lauren Cox, selected as the most outstanding player of the Greensboro Regional . "Now we're focused on winning the whole thing."

While this is the first Final Four trip for any of the current Baylor players, including standout 6-7 senior post Kalani Brown and graduate transfer point guard Chloe Jackson, Mulkey is going for the 14th time — her fourth in 19 seasons as Baylor's head coach .

Mulkey was part of the first three women's NCAA Tournaments from 1982-84 playing at Louisiana Tech, including the initial NCAA title in 1982 after the Lady Techsters won the 1981 AIWA national championship her freshman season. There were seven more Final Fours, and another title, during 15 seasons as an assistant coach on coach Leon Barmore's staff at her alma mater.

The Lady Bears were coming off a 20-loss season and had never been to the NCAA Tournament when Mulkey arrived in Waco, Texas. They have since made 18 NCAA appearances, been to 11 consecutive Sweet 16s, won 10 Big 12 titles in a row and are now going for their third national championship.

Baylor went into this season with Brown and Cox, the top two scorers and rebounders, but was unsettled in the frontcourt. Point guard Kristy Wallace had finished her career and returning sophomore Alexis Morris, expected to fill that role like she did in last year's NCAA Tournament when Wallace was hurt, was dismissed from the team in September for violating team rules.

Jackson, Baylor's first-ever grad transfer when she left LSU hoping for a title chance, made the transition from shooting guard to the point while junior Juicy Landrum became a reliable shooter, making 40 percent of her 3-pointers. Richards is a defensive stopper and there are times five freshmen have played together.

And they all like each other on and off the court, something Mulkey noticed early in the season.

"What I didn't see is could they sustain it or is this real, is this truly who they are, or do they work it, having good team chemistry," Mulkey said.

Baylor's only loss was at Pac-12 runner-up Stanford in its last game before Christmas. The Lady Bears ended then-No. 1 UConn's 126-game winning streak in the regular season in their first game after New Year's, then swept through the Big 12 regular season and conference tournament.

"I feel like our team, and our chemistry is something that, you know, is shown because of how much we have each other's back," Richards said.

There was a giggle-filled postgame news conference, led by Richards, after they won their tournament opener at home against Abilene Christian.

Brown and Cox hugged Mulkey together when they came out of Baylor's win over Iowa in the Greensboro Regional final — Brown didn't lift her coach in the air like she did at the end of the Big 12 Tournament. The post players then hugged each other and sat at the end of the bench with huge smiles on their faces.

"They have a very fun, unique, lively personality as a group," Mulkey said.