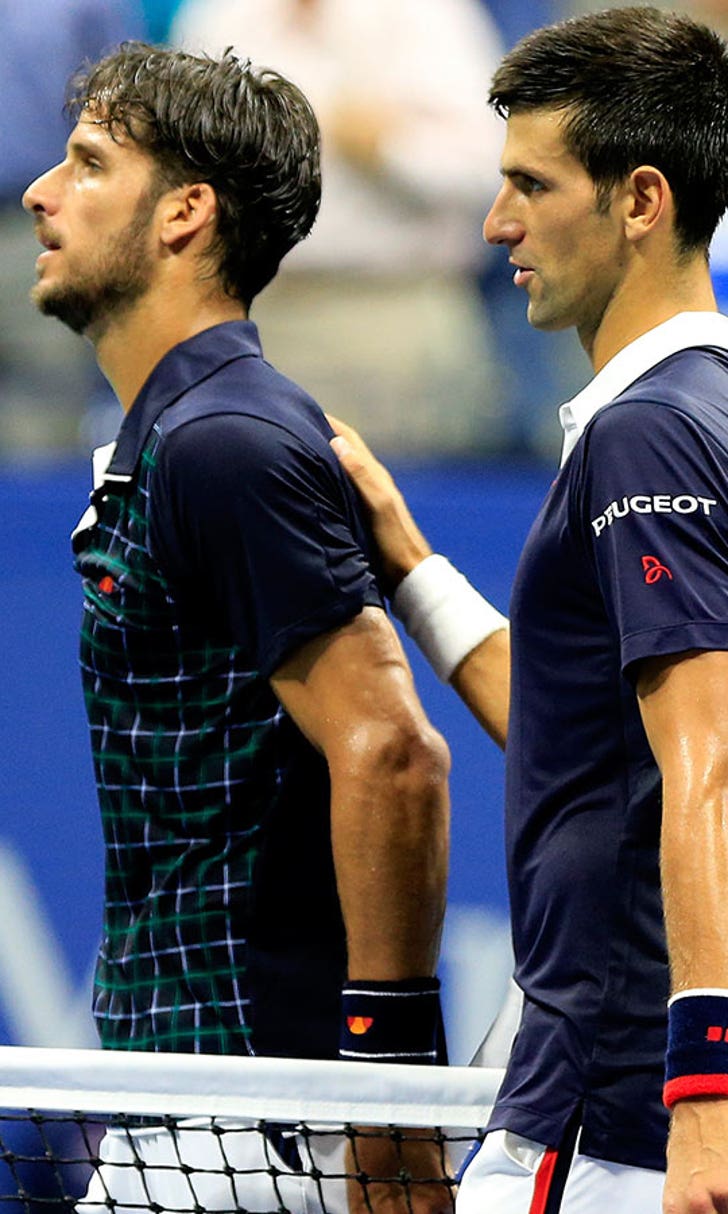 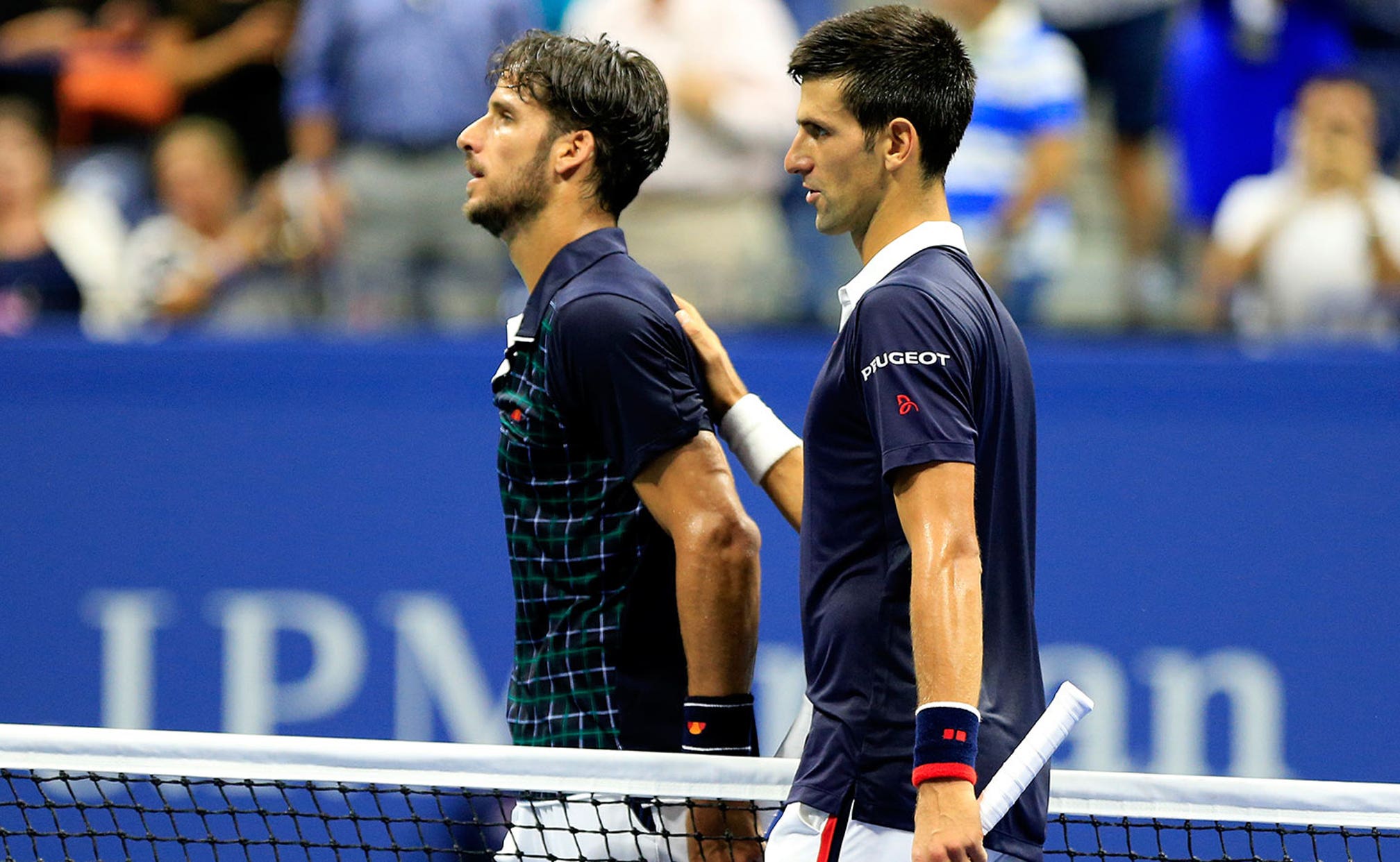 Djokovic plays into Wednesday to survive 'frustrating' Lopez in quarterfinal 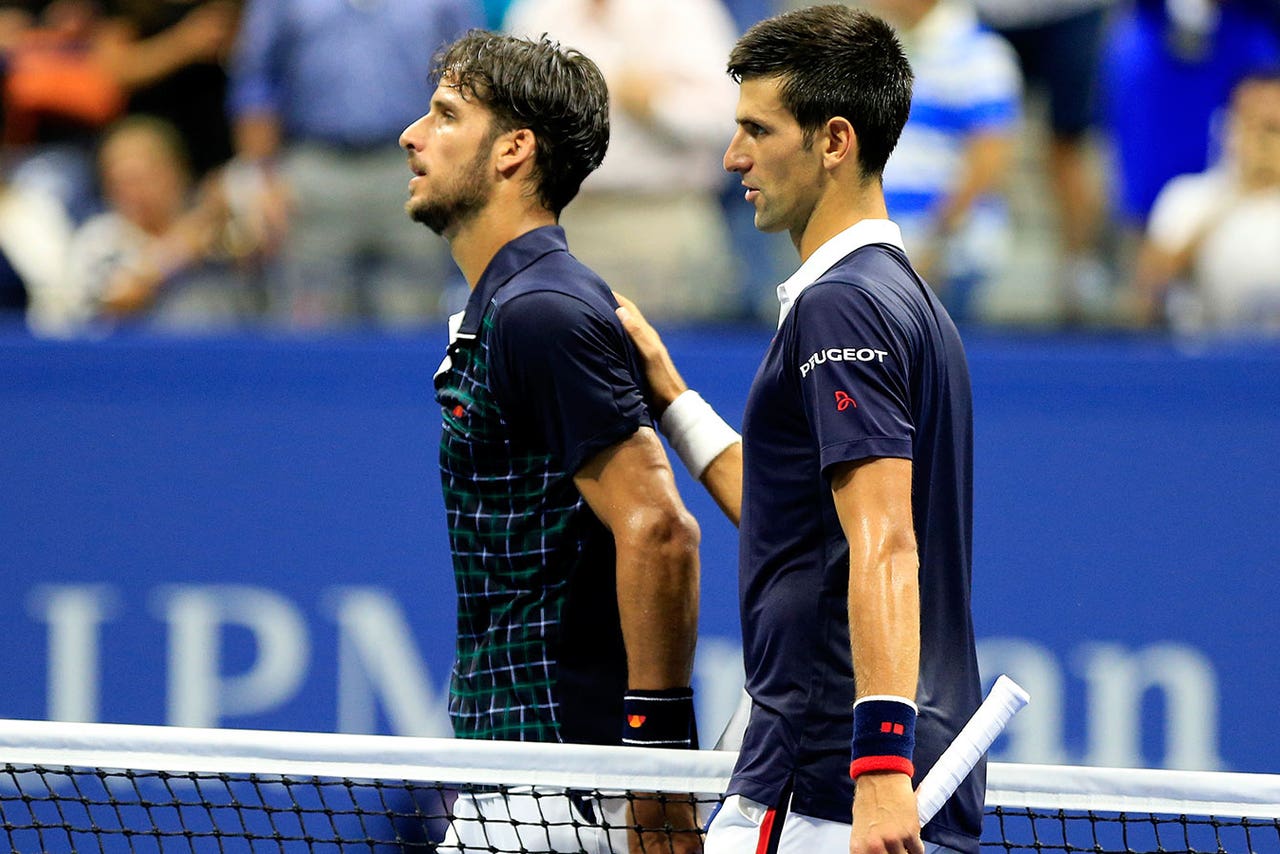 Novak Djokovic's U.S. Open quarterfinal was suddenly tied at a set apiece, and he tore off his shirt as he headed to the sideline. He sat, halfheartedly tried to smash his racket, then began screaming.

Hardly the first time, nor likely to be the last, that Djokovic has let out a little emotion during a match. Whatever gets you through the day, right?

Gathering himself after getting pushed around a bit by an opponent with an unconventional style, Djokovic wound up reaching the semifinals at Flushing Meadows for the ninth consecutive year with a 6-1, 3-6, 6-3, 7-6 (2) victory over 18th-seeded Feliciano Lopez that finished a little after 1 a.m. Wednesday.

"It was frustrating at times," the No. 1-ranked Djokovic said, "but this is the quarterfinals of a Grand Slam. This is what you expect."

For all of his success getting to the closing days of the U.S. Open, though, Djokovic has one championship to show for it, in 2011. His other eight major titles came at either the Australian Open or Wimbledon.

Still, Djokovic is certainly consistent: He has now made it to the semifinals at 22 of the past 23 major tournaments.

"I hope I can keep on going," the Serb said.

"A big mental fight," the Croatian called it, "especially after losing that fourth set."

Djokovic has never lost to Cilic, winning all 13 of their matches.

The two men's quarterfinals on the other half of the men's draw are Wednesday: No. 2 Roger Federer vs. No. 12 Richard Gasquet of France, and No. 5 Stan Wawrinka vs. No. 15 Kevin Anderson of South Africa.

Lopez's loss dropped him to 0-4 in Grand Slam quarterfinals; this was his first time that far in New York.

He is a 33-year-old lefty who is that rare player these days who likes to use serve-and-volley tactics, doing so 41 times against Djokovic, winning the point 28 times. Djokovic, a brilliant baseliner, tried serve-and-volleying twice.

"There were a few moments in which I had the No. 1 player in the world in a tough spot," Lopez said.

His only break of the match came in the second set, and he made it count. Serving out that set, he saved a break point, then ended the game with an ace and pounded his chest. That's when Djokovic was soon in his chair, bare-chested and bellowing.

Yet 40 minutes later, Djokovic was back in control, serving out the second set at love and capping it with a forehand winner.

Cilic appeared to be heading to a relatively straightforward win after taking the first two sets, considering he was 47-0 in his Grand Slam career when up by that margin. But Tsonga took the third set by finally converting his seventh break point of the match, and then serving it out from 15-30 by taking the last three points with a pair of service winners at 131 mph and 132 mph, followed by a 124 mph ace.

Tsonga, the 2008 Australian-Open runner-up, then saved three match points in the fourth set to force a fifth.

In the last set, Cilic broke at love to lead 3-2, and didn't falter this time, although he did need another two match points to close it out, double-faulting on one, before finally winning when Tsonga sailed a forehand long.

"It's a lot of frustration, of course, but that's tennis," Tsonga said.

Tsonga entered his quarterfinal against Cilic having held in all 56 of his service games in the tournament, a streak that reached 60 before Cilic broke to go up 5-4 in the first set. Cilic broke early in the second, too, and wound up winning three of Tsonga's service games.

Tsonga helped out by double-faulting 11 times.

"I just served, I would say, very bad compared to the other days," Tsonga said.

Cilic wore a thick brace on his right ankle, which he tweaked during his fourth-round victory over another Frenchman, Jeremy Chardy. But it was Tsonga who appeared more troubled by an ailment, wearing a thick band of tape under his left knee.

"I don't really want to talk about this, you know," Tsonga said. "It's part of the game, unfortunately, for me."