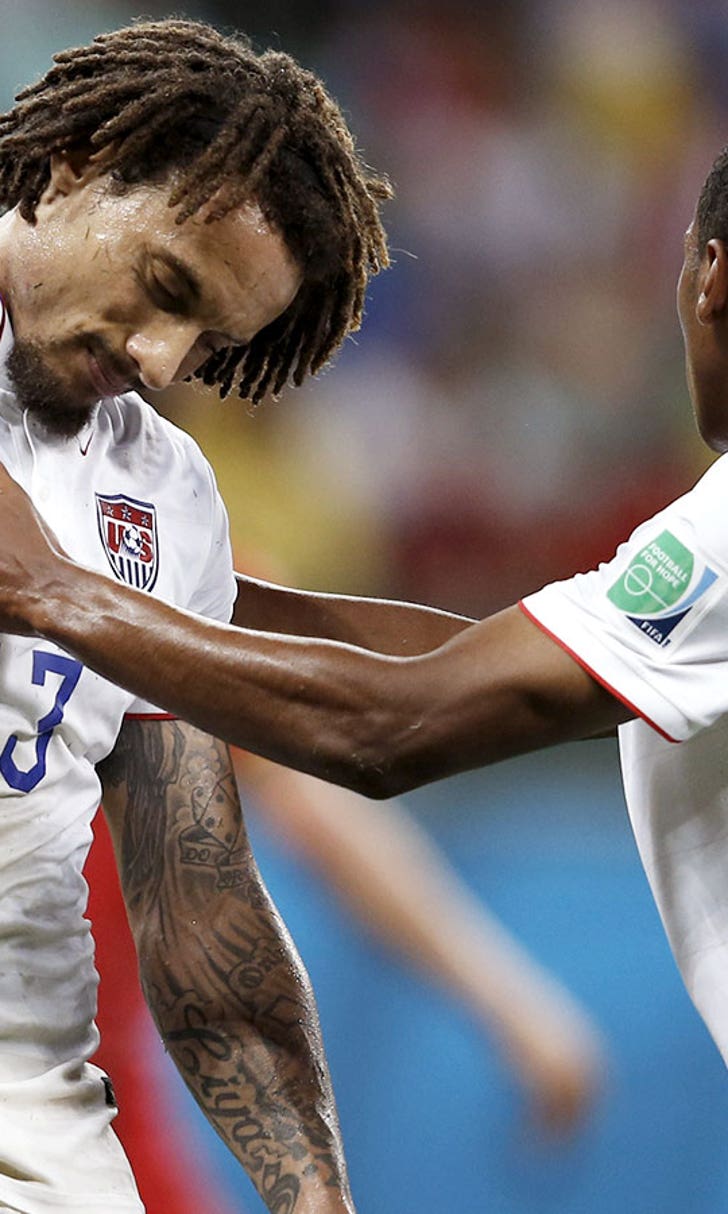 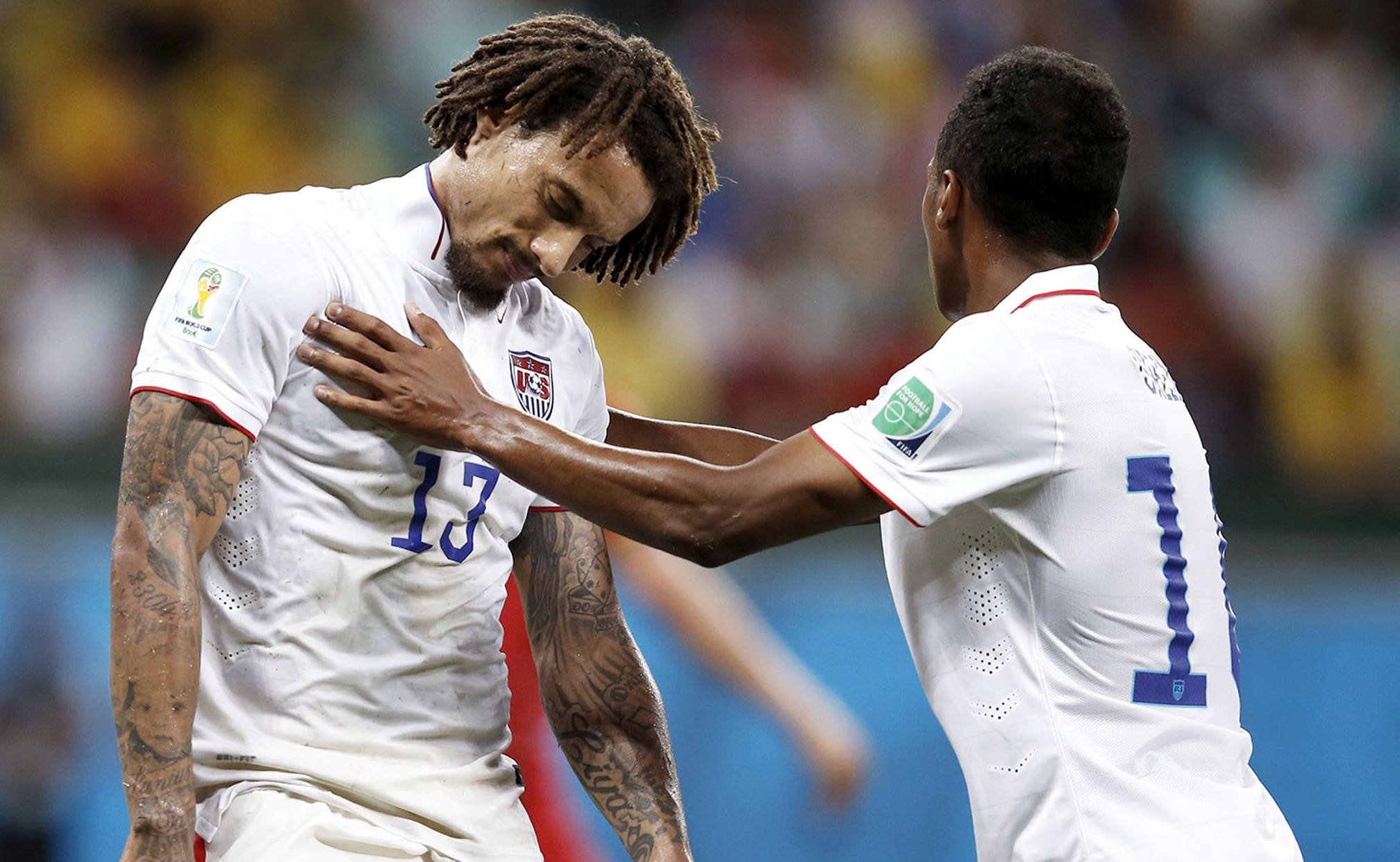 Romelu Lukaku scored in extra-time to lead Belgium past the United States 2-1 in Salvador, ushering the Americans out of the 2014 World Cup on Tuesday night. The result sets Belgium up with a quarterfinal against Argentina.

28,000 fans packed Chicago’s Soldier Field on Tuesday to watch the game on a JumboTron -- viewing parties were held coast to coast. The Americans were that classic story: A collection of underdogs that weren’t even supposed to make it this far. They were grist for the so-called “Group of Death,” cannon fodder for the likes of Ghana, Germany and Portugal.

Until, of course, they weren’t. And so when the Americans showed up at the Fonte Nova to play a Belgian team that is well-known among soccer fans but little known to the sports public, many thought: Why not? Klinsmann’s relentless positivity was infectious, and even though this team was hardly complete, they were competitive -- and they believed they could win.

So Tuesday’s loss was very bitter. In 2010, it was Ghana’s Asamoah Gyan scoring the vital goal in extra-time; On Tuesday, De Bruyne and Lukaku combined to bring the hurt. It would be untrue to say Belgium’s win was undeserved as the Americans were second best for much of the game. But few will disagree that the Americans showed guts and heart, and that will be the lasting memory of this team at this World Cup.

Klinsmann spent much of Tuesday night staring and pacing, watching his young American side struggle against a fast, slick and -- luckily enough -- inefficient Belgian side that for large stretches had their way with the American midfield. Outshooting the USA almost 10-1, Belgium forced the USA into a rearguard action from the start. Rarely were the Americans able to break the pressure.

Belgian star Lukaku sat on the bench in place of the young Divock Origi. Just 39 seconds into the game, he showed why, blowing down the right flank and forcing Tim Howard into a save off his boots. It was an ominous opening for the Americans, who would see Origi taunt them all night. After a two or three minute wobble at the beginning, the Americans settled into a predictable counter-attacking pattern, trying to soak up the red waves, and playing diagonals into the channels when moving forward. Unfortunately, there was a lot of the former and precious little of the latter.

While DaMarcus Beasley and Clint Dempsey linked up well -- at one point forcing Thibaut Courtois into a good stop in the 28th minute -- the decision to sit Kyle Beckerman proved costly. Michael Bradley was better moving forward in this game but the USA’s lack of midfield control and porousness out wide left was a major problem. Jan Vertonghen in particular exploited those weaknesses, pushing at Fabian Johnson and looking for De Bruyne or Eden Hazard. Beasley -- arguably the best player on the field for the USA in he first half -- was called in to sweep one of Vertonghen’s crosses off the goal-line. The Americans were also lucky to see Hazard run into traffic more often than not.

When Johnson appeared to pull his hamstring in the 30th minute, most American fans must have wondered what could possibly happen next. After all, Jozy Altidore was barely fit, Dempsey and Jermaine Jones were both playing with broken noses, and Matt Besler at times looked as if he was being held together with baling twine. Surely the answer was to put Beckerman in, right?

No. Jurgen Klinsmann made a gutsy call, throwing on the 20-year-old shock-topped speedster DeAndre Yedlin as a right back. Yedlin, normally used as a right-sided midfielder, played the position in college and with the MLS Seattle Sounders -- but is a player who generally drifts, and can be badly beaten. Guess what? From the moment he came in, he managed to shut down Hazard and stop some of the bleeding. It was a solid and assured shift from the youngster, who looked like a true player of the future for the United States.

The Americans closed out the first half looking far more solid. You would not say they were on top at any point -- but they had managed to keep the Belgians off the board with only a handful of serious chances. The problem was that because they were unable to control any of the match in the middle of the field -- and unable to play a higher line to boot -- they were under heavy and consistent pressure.

The second half saw the Americans get no respite whatsoever. Graham Zusi was particularly poor, and the threads became even more frayed down that left side. Origi made hay, setting up chance after chance. Howard, who has been so good for the Americans, turned in another superb performance, but in the end he could only stop so many.

When De Bruyne scored, heads dipped. His shot, across Howard’s body off service from Lukaku looked to have caught the Americans with tired legs and tired minds. It was Besler’s first mistake -- a slip -- and it felt like a dagger. When the pairing reversed ten minutes later, De Bruyne volleying a well-weighted ball for Lukaku to finish over his Everton teammate, it felt like a wake.

And then, Klinsmann rolled the dice. Young Bayern Munich star Green came on and immediately did what no American had been able to do all night. Michael Bradley put a ball over the Belgian backline, he ran on to it, and a stunned Courtois watched as his volley swerved into the top right corner.

Two minutes later, Yedlin found Jones, and there was agony as his volley skated wide right. Clint Dempsey then had a chance with six minutes to play, peeling off the wall and forcing Courtois to make a yeoman save. That began a late flurry that had the entire country on the edge of their seats. It would not be enough.

The Americans now go home, and they will regroup. They have shown they have power and promise, with some bright young talent. They are no longer the “soccerball” side, favorites only of sports-loathing hipsters.

They are serious business. And they will be back.