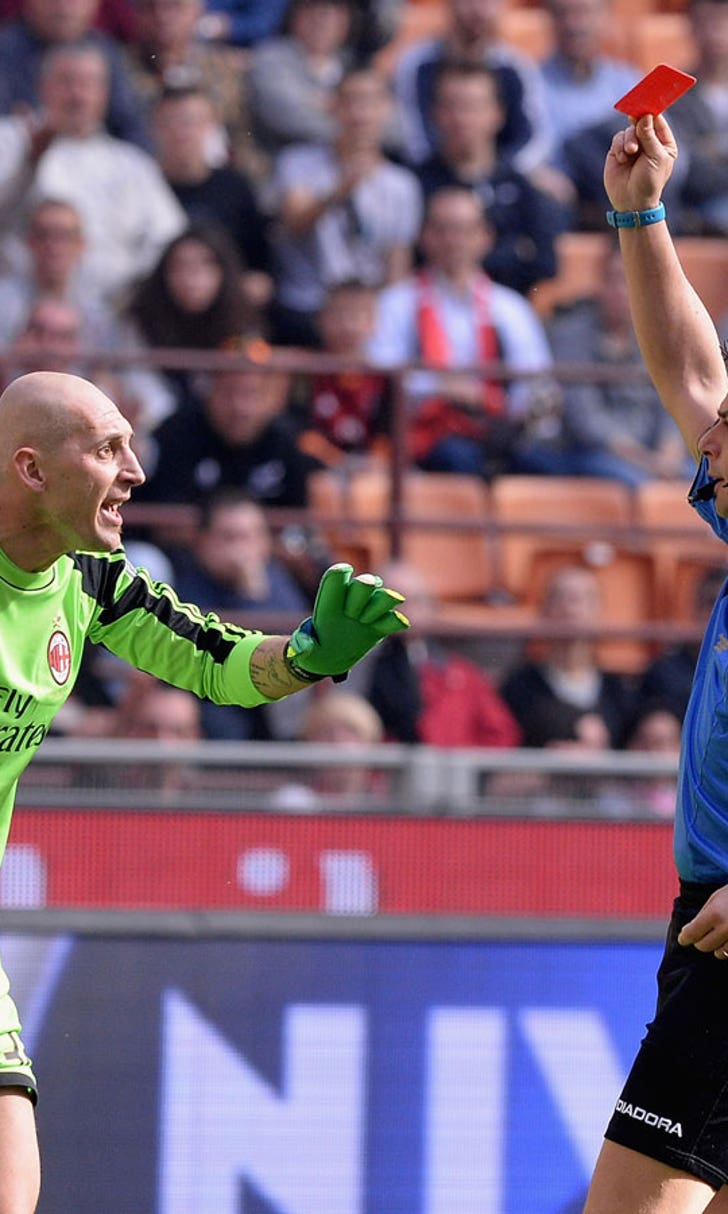 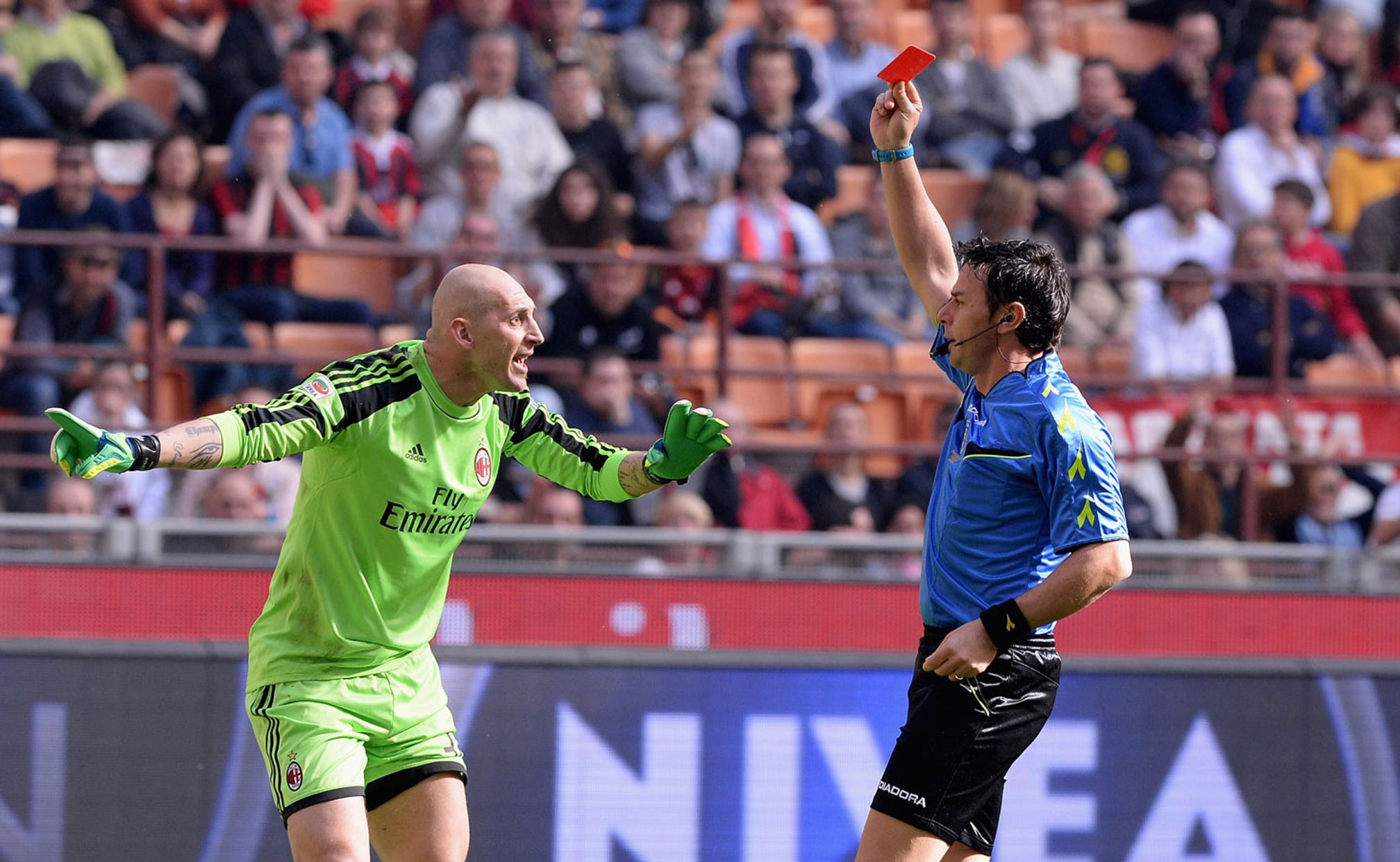 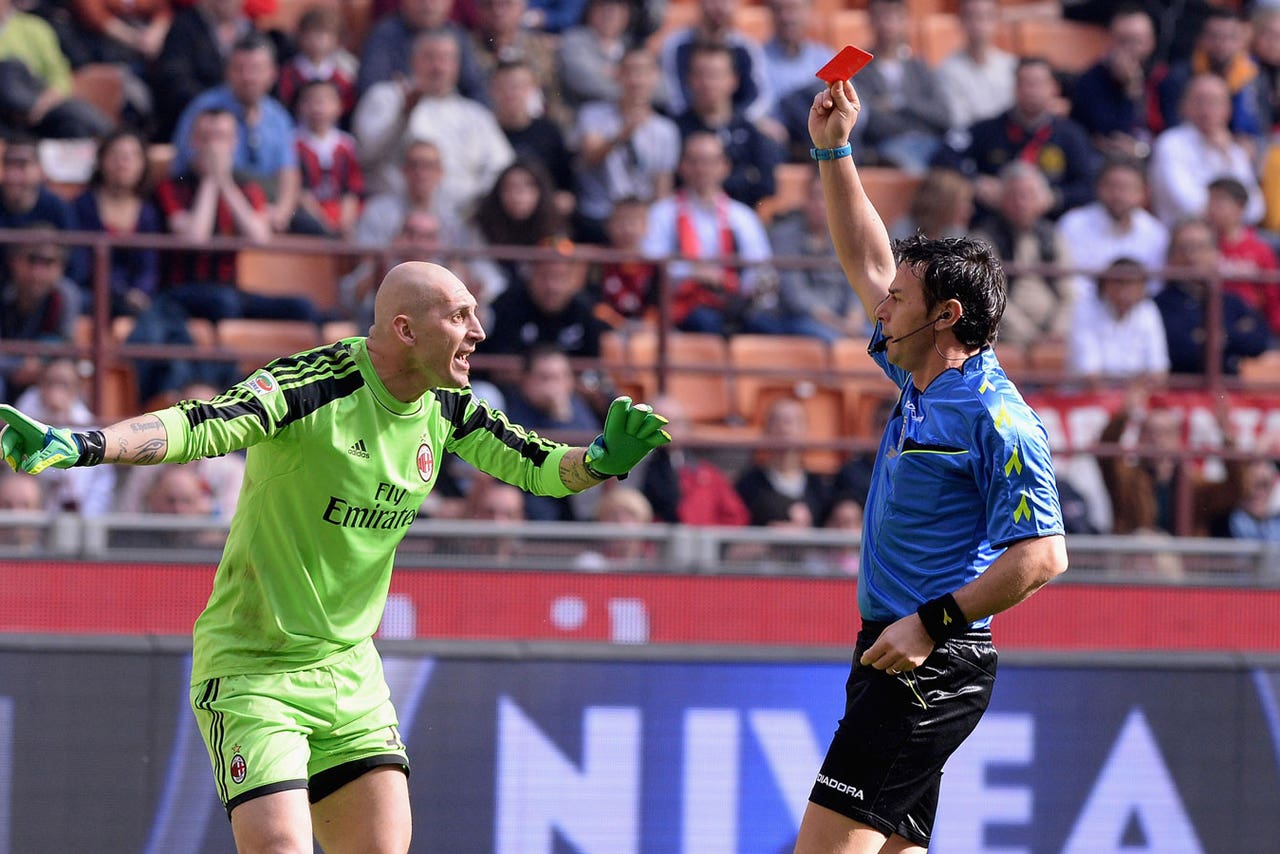 AC Milan fought back from two goals down but lost 4-2 at home to Parma after playing almost the entire Serie A match with 10 men on Sunday.

Former Milan striker Antonio Cassano scored a brace, including a penalty after Rossoneri goalkeeper Christian Abbiati was sent off in the fifth minute for bringing down Ezequiel Schelotto.

It was the second successive match Milan has conceded four goals after its hefty Champions League defeat to Atletico Madrid.

There were protests outside San Siro before the match, while Balotelli was booed almost every time he touched the ball.

Serie A leader Juventus also plays this evening, at Genoa.

Bologna has replaced Livorno in the bottom three.

Lazio won 2-0 at Catania while earlier Atalanta eased to a 3-0 win over Sampdoria.

Milan got off to bad start when Abbiati came rushing out of his area and clattered into Schelotto. He was shown a straight red card and substitute goalkeeper Marco Amelia's first task was to pick the ball out of the back of the net following Cassano's penalty.

Balotelli almost leveled 10 minutes later but he sidefooted a corner off the base of the right post.

Cassano doubled his tally five minutes into the second half as he was left in acres of space to control Afriyie Acquah's cross and fire home.

Milan pulled one back shortly before the hour when substitute Rami got between two defenders to head in Kaka's cross three minutes after coming off the bench.

And Milan was surprisingly level in the 75th minute after Joel Obi was harshly judged to have brought down Riccardo Montolivo in the area and Balotelli converted the resulting penalty.

However, Amauri backeeled Schelotto's cross in moments later and Biabiany headed in seconds before the final whistle to ensure Parma extended its club record unbeaten run to 16 matches.

Lazio remained five points behind Parma after its win at 10-man Cagliari.

Lazio took the lead in the 19th minute as Miroslav Klose flicked on for Senad Lulic to race through one-on-one with the goalkeeper and fire past Vlada Avramov.

Cagliari should have leveled in the 68th after Alvaro Gonzalez fouled Matias Vecino in the area but Mauricio Pinilla drove his penalty wide of the right post.

Cagliari's misery was complete when captain Daniele Conti was sent off for an elbow onLucas Biglia.

At the other end of the table, Sassuolo picked up its first win in nine matches.

Catania, which had earlier hit the post, went in front on the half hour as Gonzalo Bergessio beat the offside trap and placed an angled drive into the far corner.

Halftime substitute Simone Zaza leveled for Sassuolo, which took the lead when Simone Missiroli was allowed a free header on a corner.

Sassuolo was dominating and Nicola Sansone sealed the match two minutes from time.

Sassuolo swapped places with Catania at the foot of the standings and is three points from safety after Livorno's win.

Marco Benassi and Paulinho scored at the start of the second half but Ibrahima Mbaye was sent off with 10 minutes remaining after a second yellow card for handball.

Innocent Emeghara was also dismissed for Livorno following another booking for a foul on Archimede Morleo five minutes from time and Lazaros Christodoulopoulos converted the resulting penalty.

Livorno had squandered a two-goal lead to lose 4-2 last weekend, but held on for a vital three points.