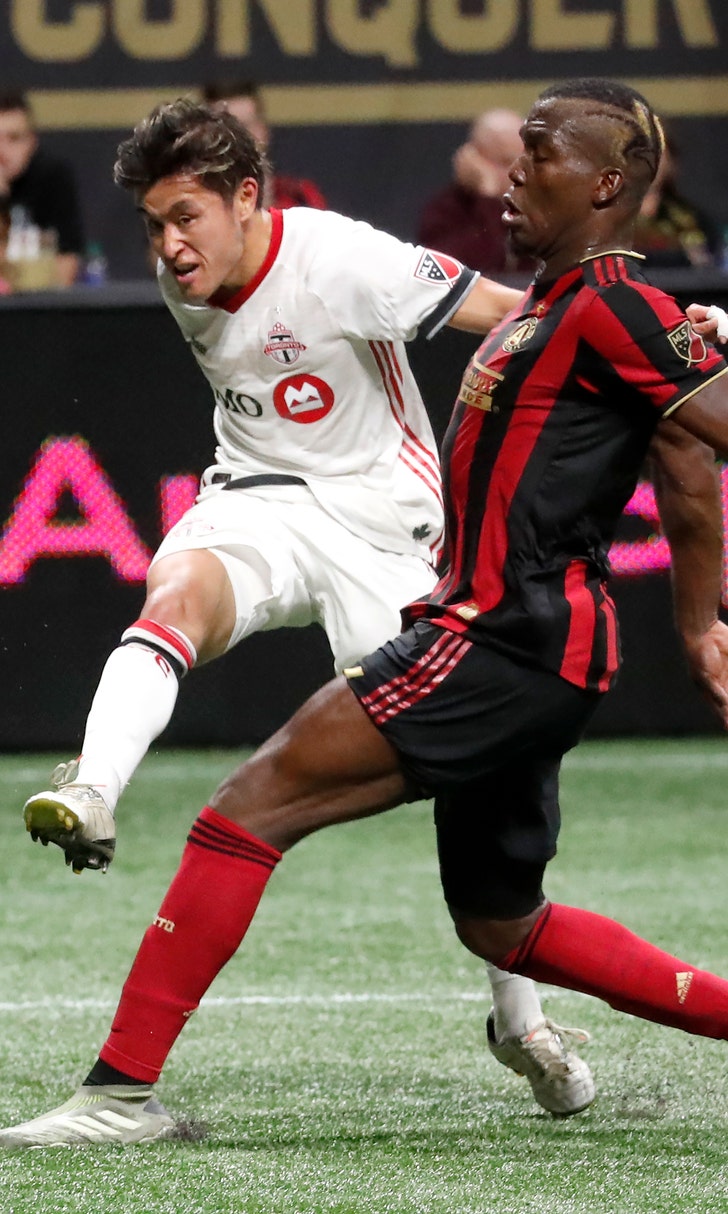 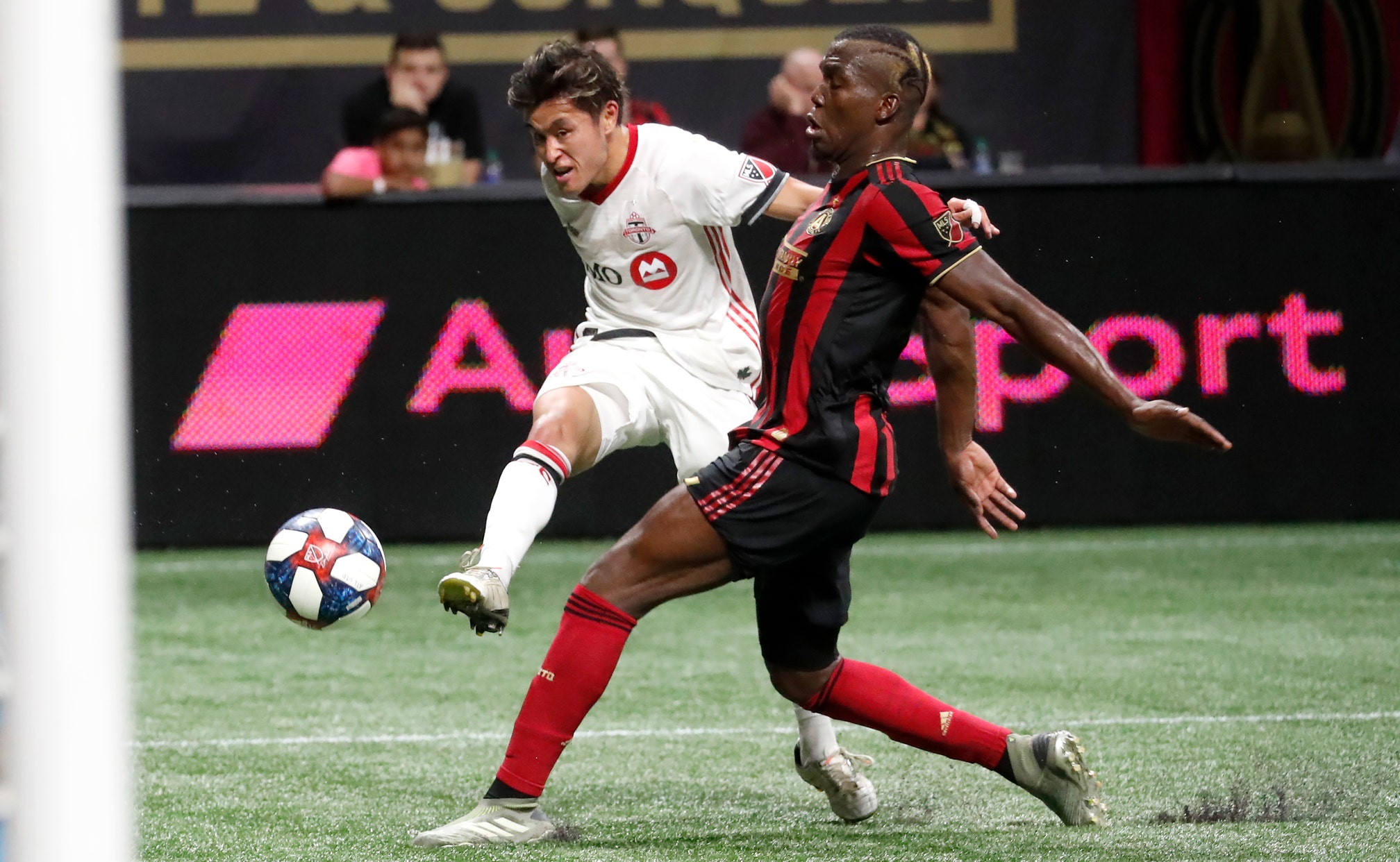 ATLANTA (AP) — Toronto FC has turned into the Road Warriors in the MLS playoffs.

One more victory in a tough environment will bring home the championship.

Nick DeLeon scored the tiebreaking goal in the 78th minute, Quentin Westberg swatted away a penalty kick and Toronto advanced to the MLS Cup title game with a 2-1 victory over defending champion Atlanta United in the Eastern Conference final Wednesday night.

Next up: A trip to Seattle to face the Sounders on Nov. 10.

"We're not intimidated at all," said Nick DeLeon, who came off the bench early in the second half and came through with the shot of his life. "It'll be just the same as here. Turf field in a football stadium with a massive crowd. So, it'll be the same. We're looking forward to it."

Nicolas Benezet also scored for Toronto, which knocked off the top teams in the East — New York City FC and Atlanta — to earn a shot at the championship. Seattle reached the title game by upsetting Supporters' Shield winner Los Angeles FC 3-1 in the Western final.

Atlanta jumped ahead just 4 minutes into the game on Julian Gressel's goal and had a chance to increase the margin on a penalty. But Westberg got a hand on Josef Martinez's kick from the spot, which kept Toronto in the game.

"That save, honestly, made the difference," DeLeon said. "If they score there, it's a different game. Q kept us in the game."

DeLeon won it with a brilliant shot from 25 yards out. Surrounded by Atlanta defenders, he found just enough room to unleash a right-footed blast that beat goalkeeper Brad Guzan in the top left corner.

"When I turned, I had an intent to play it back out," DeLeon said. "But when nobody stepped, I said, 'OK, I'm going to have a shot.' Fortunate enough to go in."

Toronto FC returns to the title game just two seasons after winning the title with one of the greatest years in MLS history. The Canadian team slumped badly in 2018, missing the playoffs, but now finds itself playing for another championship after taking out a pair of powerhouse teams on the road.

It was a bitter ending for Atlanta, which would have hosted the MLS Cup title game for the second year in a row with a victory. United won the Campeones Cup and the U.S. Cup, but this was the title they really wanted — especially in the final season for captain Michael Parkhurst, who is retiring.

The longtime MLS stalwart came up two wins short of another championship.

"It was frustrating, for sure, especially after the great start we had," Parkhurst said.

The winning goal came after Darlington Nagbe was dumped in the Toronto end of the field. While the United players called for a foul, the referee allowed the teams to play on.

Atlanta got back in plenty of time, but simply gave DeLeon too much room.

"We had a few guys around him. I don't know what happens. Everybody probably thinks someone else is going to stay with the ball," Parkhurst said. "For a half a second, we left him free and he takes a great shot."

United grabbed a quick lead, catching Toronto with a long pass while the back line was lingering in the midfield. Pity Martinez broke in all alone and, with two defenders trying desperately to run him down, spotted Gressel streaking down the right wing. Martinez dumped a pass to Gressel, who easily flicked the ball into an open net for his first career playoff goal.

Atlanta really had the visiting team reeling before the 10-minute mark, set up by another long pass to Pity Martinez. The Argentine midfielder was taken down in the area by Michael Bradley, resulting in a penalty kick that sent Josef Martinez, one of the league's most dynamic scorers, to the spot.

Martinez had converted 18 of 21 penalties during all competitions this season, but his shot lacked its usual zip. Westberg guessed right, dove that way and stuck out his right hand to keep Atlanta's lead to a single goal.

In the 14th, Toronto seized on that missed opportunity, With its only real good scoring chance of the first half, Benezet found a bit of room at the left edge of the area and let go of a curling shot that eluded Guzan's stretch, caught the far post and went in.

It was the first goal allowed by Atlanta in three postseason games.

In the end, United dominated most of the categories on the stat sheet, most notably piling up a massive 18-4 edge in shots.

But Toronto was celebrating at the end, hoisting the Eastern Conference trophy while a glum crowd of 44,055 filed out of Mercedes-Benz Stadium.

"We probably didn't win very many categories except for one, which was 2-1 on the scoreboard," Toronto coach Greg Vanney said. "From a soccer perspective, they were the better team tonight."