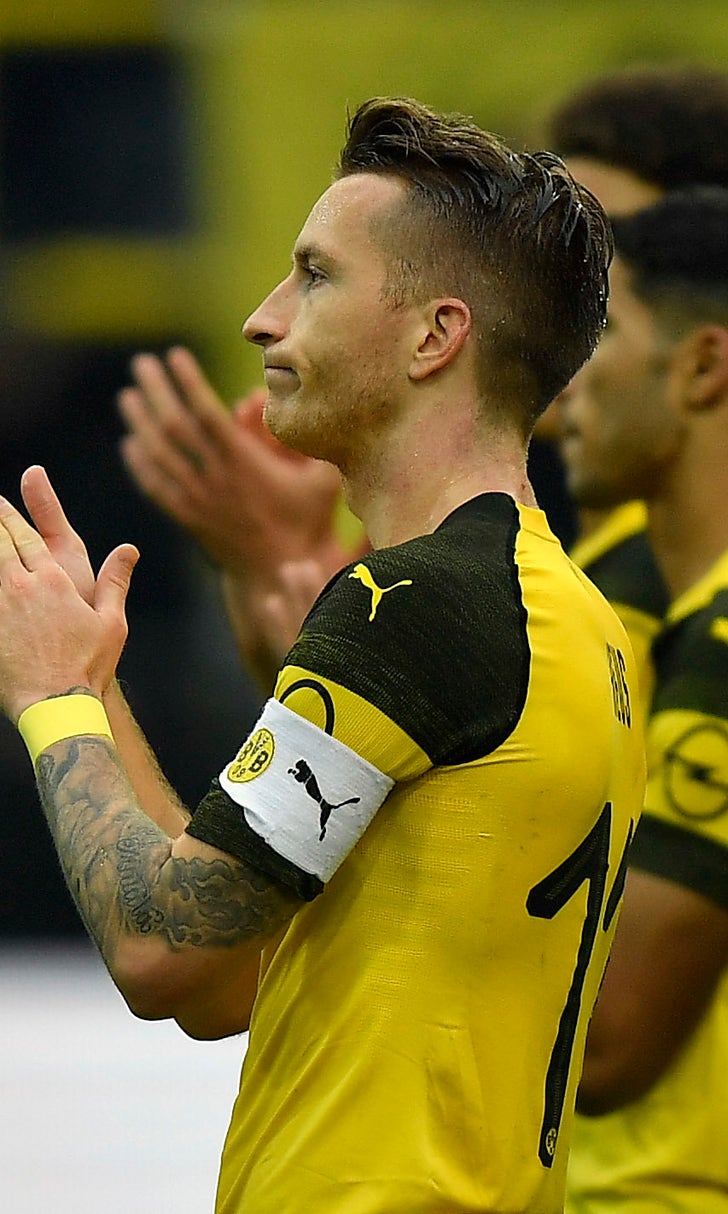 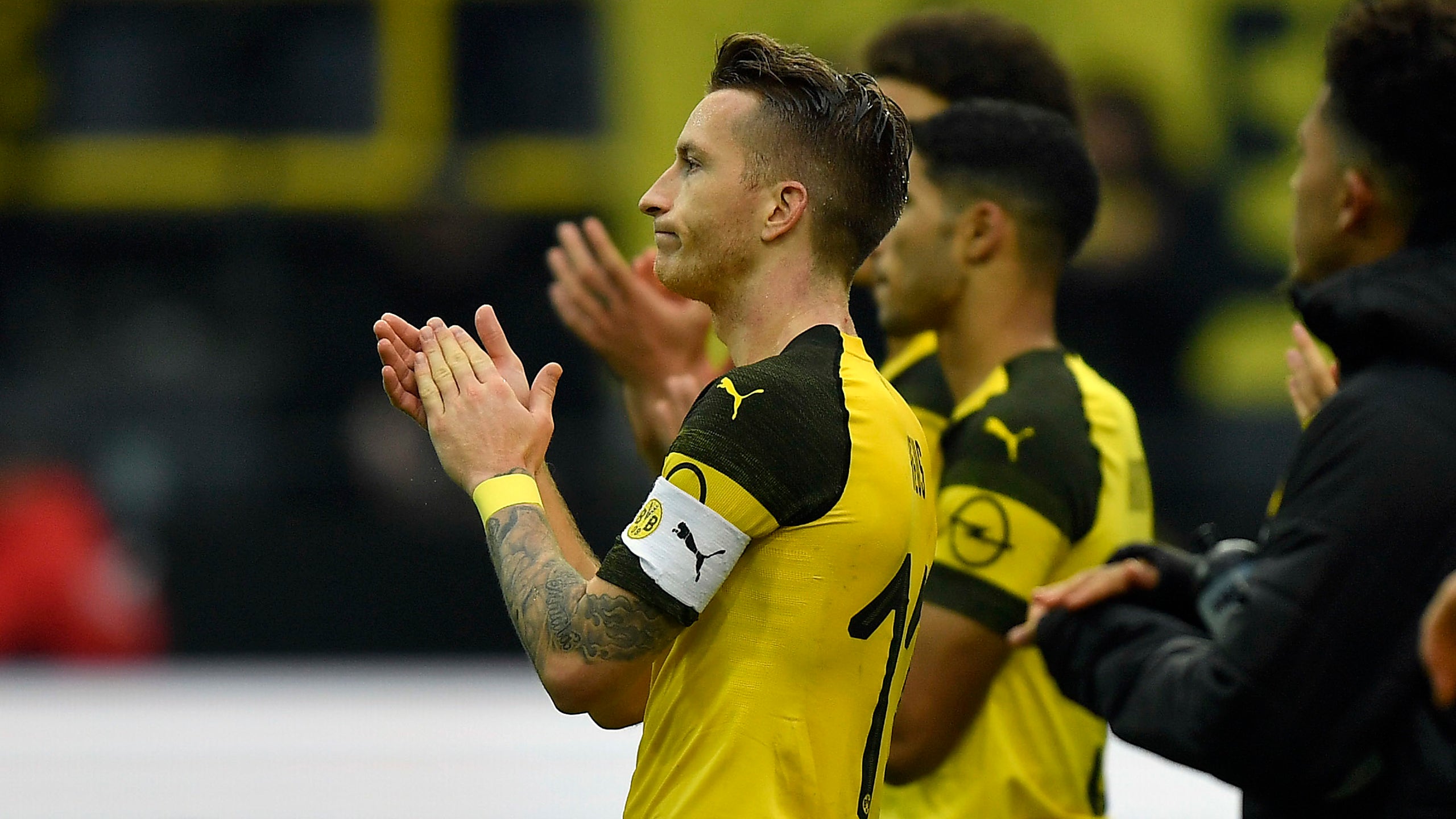 DORTMUND, Germany (AP) — A draw with Hertha Berlin may have come at just the right time for Borussia Dortmund.

The team had failed to score four or more goals in only one of its previous six games - a 3-0 win over Monaco - and had taken a three-point lead in the Bundesliga after playing some outstanding football. Suddenly, after years of Bayern Munich dominance, Dortmund was helping to make German soccer exciting again.

Lucien Favre's side was drawing comparisons with Juergen Klopp's team of Bundesliga winners in 2011 that followed up with a league and cup double the next year. The current team, like Klopp's, is young, hard-working, fast and skilled, brimming with confidence after a series of eye-catching wins.

Dortmund's 4-0 victory over a tough Atletico Madrid team on Wednesday captured widespread attention. Even Diego Simeone was impressed despite his worst defeat since he took over in December 2011.

"They are doing very well at the moment, it is very nice to watch," the Atletico coach said of Dortmund. "I hope they keep playing like that."

Klopp, now in charge of Liverpool, sent his congratulations from England.

It was all too much for Dortmund sporting director Michael Zorc.

"Enough praise, that's it," Zorc said last week. "There's no reason to get carried away with celebrations."

Hertha put the brakes on any lingering euphoria on Saturday when Salomon Kalou scored a penalty in injury time to snatch a 2-2 draw for the visitors as Dortmund let a seventh straight victory slip away.

While Dortmund remains the only unbeaten team in the Bundesliga, the draw provides a reality check.

After routing Nuremberg 7-0 on Sept. 26, Dortmund fell two goals behind Bayer Leverkusen in its next match before it turned the game around to win 4-2.

Marco Reus said he noticed his teammates weren't as focused as they should have been.

Reus has grown into his role as captain. The Germany forward, now 29, is one of the senior figures in a squad stocked with youth.

Eighteen-year-old Jadon Sancho became Dortmund's youngest player to score two goals in a Bundesliga game on Saturday. Apart from conceding the penalty, 19-year-old Dan-Axel Zagadou has been impressive in defense.

Fellow defender Achraf Hakimi shone with three assists against Atletico. The 19-year-old Hakimi, on loan from Real Madrid, has been involved in eight goals in his last six competitive games.

Jacob Bruun Larsen has also been impressive since returning from a loan spell at Stuttgart. The 20-year-old Danish midfielder has three goals and three assists, while 22-year-old Christian Pulisic already feels like a veteran in his third full season at the club.

"The mix makes it work," said Zorc, whose offseason transfer dealings have balanced youth with experience.

Dortmund has also been boosted by Paco Alcacer since his arrival on loan from Barcelona. He has scored every 18 minutes in the league, with seven goals in four appearances.

Perhaps Zorc's biggest coup was getting Favre to join. Dortmund wanted the former Borussia Moenchengladbach and Hertha coach the previous year, but French side Nice didn't let him go.

The tactically astute Favre has restored some defensive stability to a lineup that appeared brittle and prone to collapse last season. Dortmund allowed rival Schalke to come from four goals down to draw 4-4 in the Ruhr derby. It's hard to imagine Favre's side doing the same.

Apart from not taking chances on Saturday, Dortmund seems to be scoring goals for fun. Before the Hertha game, Dortmund clocked up 37 goals and conceded just nine in 12 competitive games. It won 10 of those and lost none.

Raphael Guerreiro scored two goals against Atletico after coming on as a substitute, continuing Favre's golden touch with changes. Altogether, Favre's substitutions have contributed 16 goals so far. The Swiss coach also appears to be bringing Mario Goetze back to his old self after difficult times for the 2014 World Cup winner.

Goetze was critical after the draw with Hertha, upset about "two lost points."