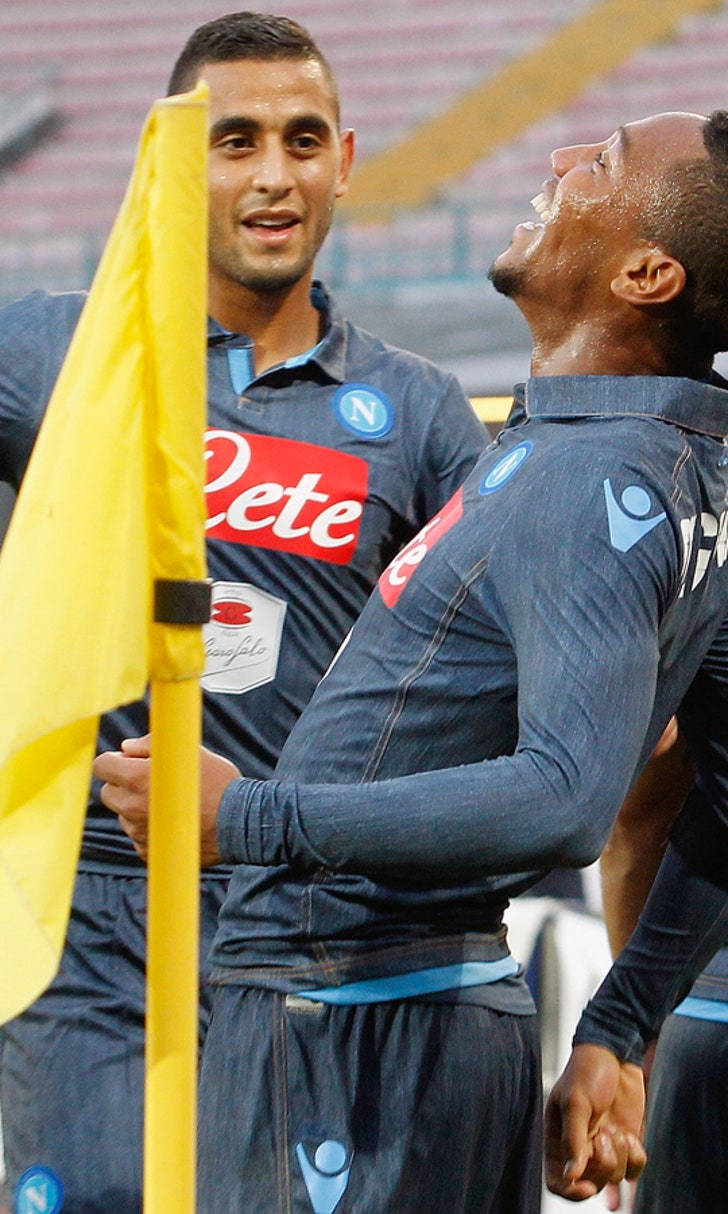 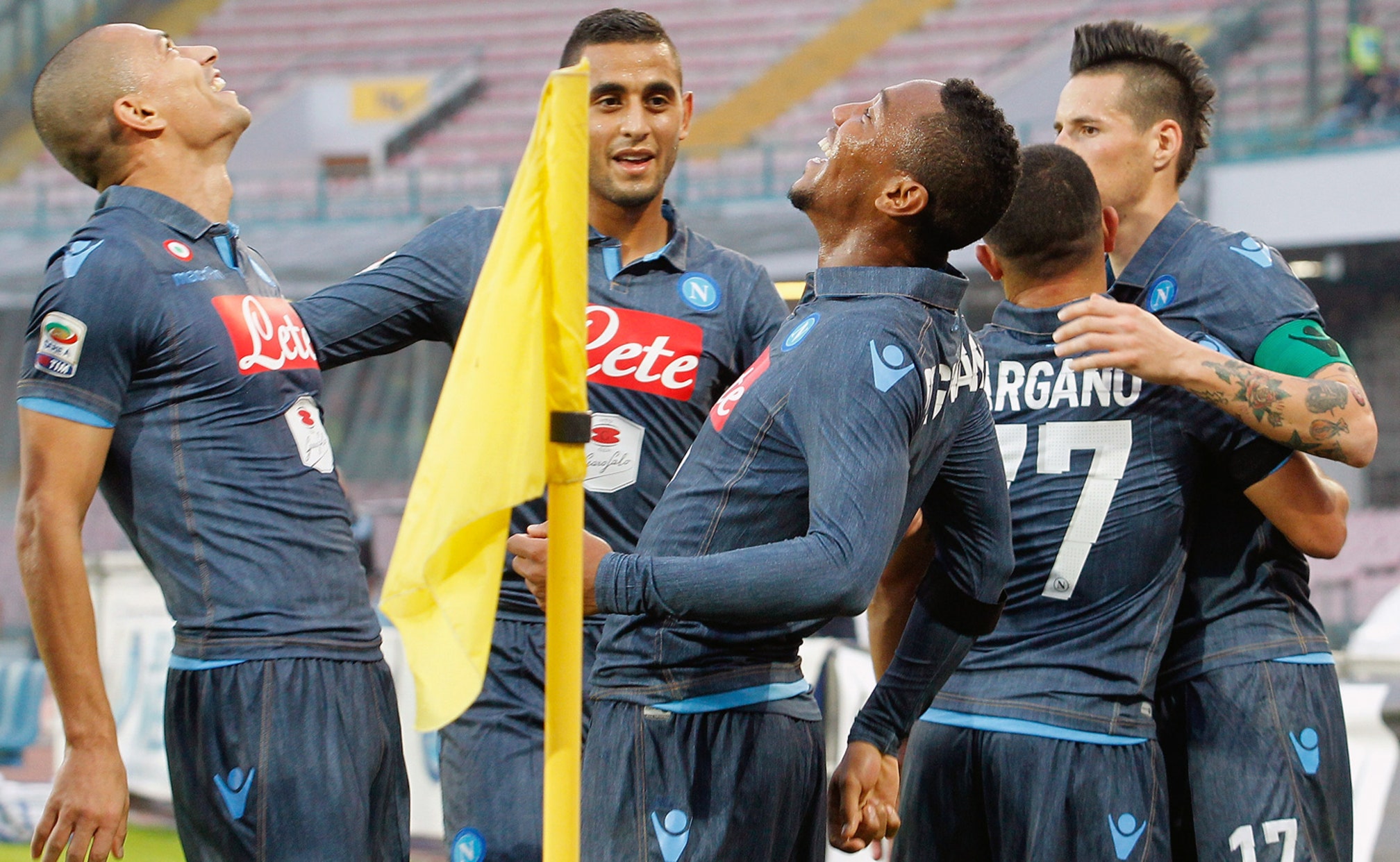 Napoli squanders two-goal lead to draw at home to Cagliari 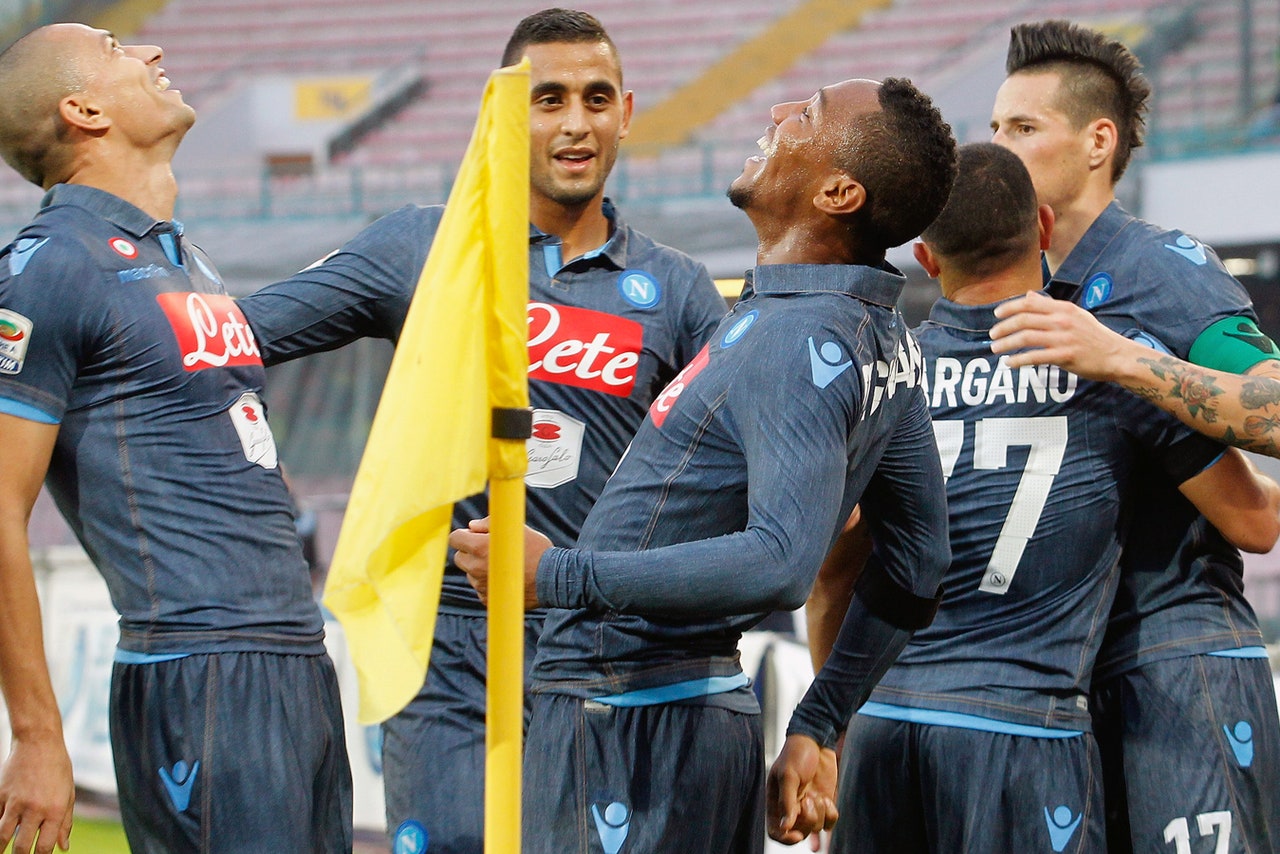 Title hopeful Napoli squandered a two-goal lead to draw 3-3 at home to Cagliari and lose ground on the top two in Serie A on Sunday, ahead of a hotly anticipated Milan derby.

Gonzalo Higuain and Gokhan Inler gave Napoli the lead but Victor Ibarbo and Diego Farias scored either side of halftime.

Napoli slipped nine points behind Juventus and six behind Roma, after both won on Saturday.

Sampdoria remained a point further back after an own goal salvaged a 1-1 draw at Cesena.

AC Milan hosted Inter in the Derby della Madonnina later in Roberto Mancini's first game back in charge of the Nerazzurri.

In the lunchtime kickoff, Torino midfielder Juan Sanchez Mino had a penalty saved before Antonio Floro Flores headed home late on to snatch a 1-0 win for Sassuolo.

Napoli coach Rafa Benitez was forced to rejig his squad because of injuries and suspension though Cagliari had lost in its last four trips to Naples and it took just 11 minutes for the home side to take the lead.

Higuain latched onto a long throw-in from Faouzi Ghoulam near the halfway line and raced past Luca Rossettini and Francesco Pisano before slotting across into the far corner.

Napoli doubled its lead on the half-hour when Alessio Cragno did brilliantly to parry De Guzman's effort but the ball came out for Inler to smash it in from 25 yards.

Ibarbo got one back for Cagliari seven minutes from halftime following some delightful footwork.

And Cagliari leveled two minutes after the interval when Farias headed in from close range after Rossettini knocked on Andrea Cossu's free kick.

Napoli was back in front on the hour mark when De Guzman was left unmarked to head Christian Maggio's cross into the far corner but Farias leveled again, sidefooting in Ibarbo's low cross.

Sampdoria dominated but Cesena took a surprise lead when Stefano Lucchini bundled over against his former club, where he spent four seasons.

However, Cesena gifted its opponent the equalizer when substitute Constantin Nica poked a cross into his own net.

Nicola Sansone hit the post for Samp late on, while Emmanuel Cascione's free kick smacked the crossbar for Cesena.

Fiorentina was a point behind Verona in midtable, with both on a poor run of form.

It was the home side that broke the deadlock in the 16th minute when Marcos Alonso nodded on a corner for Gonzalo Rodriguez to tap in from a couple of yards.

Mario Gomez, who has struggled with injuries, almost scored his first goal in more than eight months but hit the crossbar, as did Luca Toni for Verona.

Nico Lopez leveled before halftime after a delightful Toni through ball but Juan Cuadrado grabbed the winner, with the ball going in off his knee.