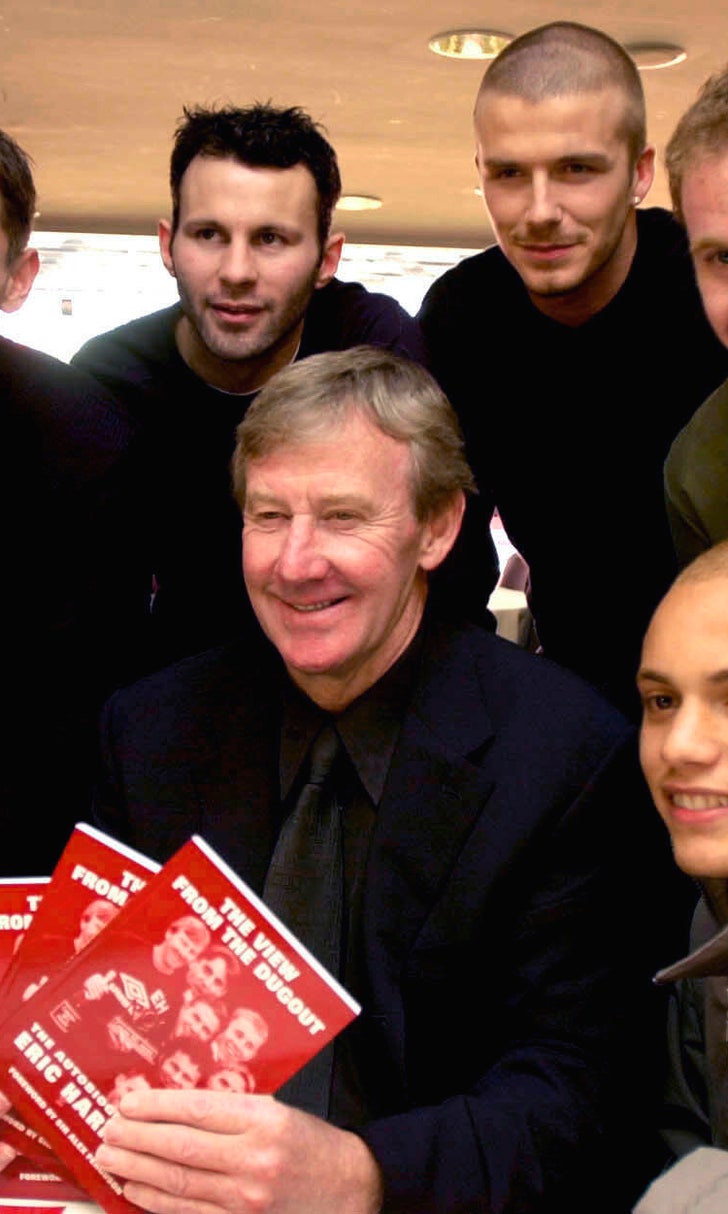 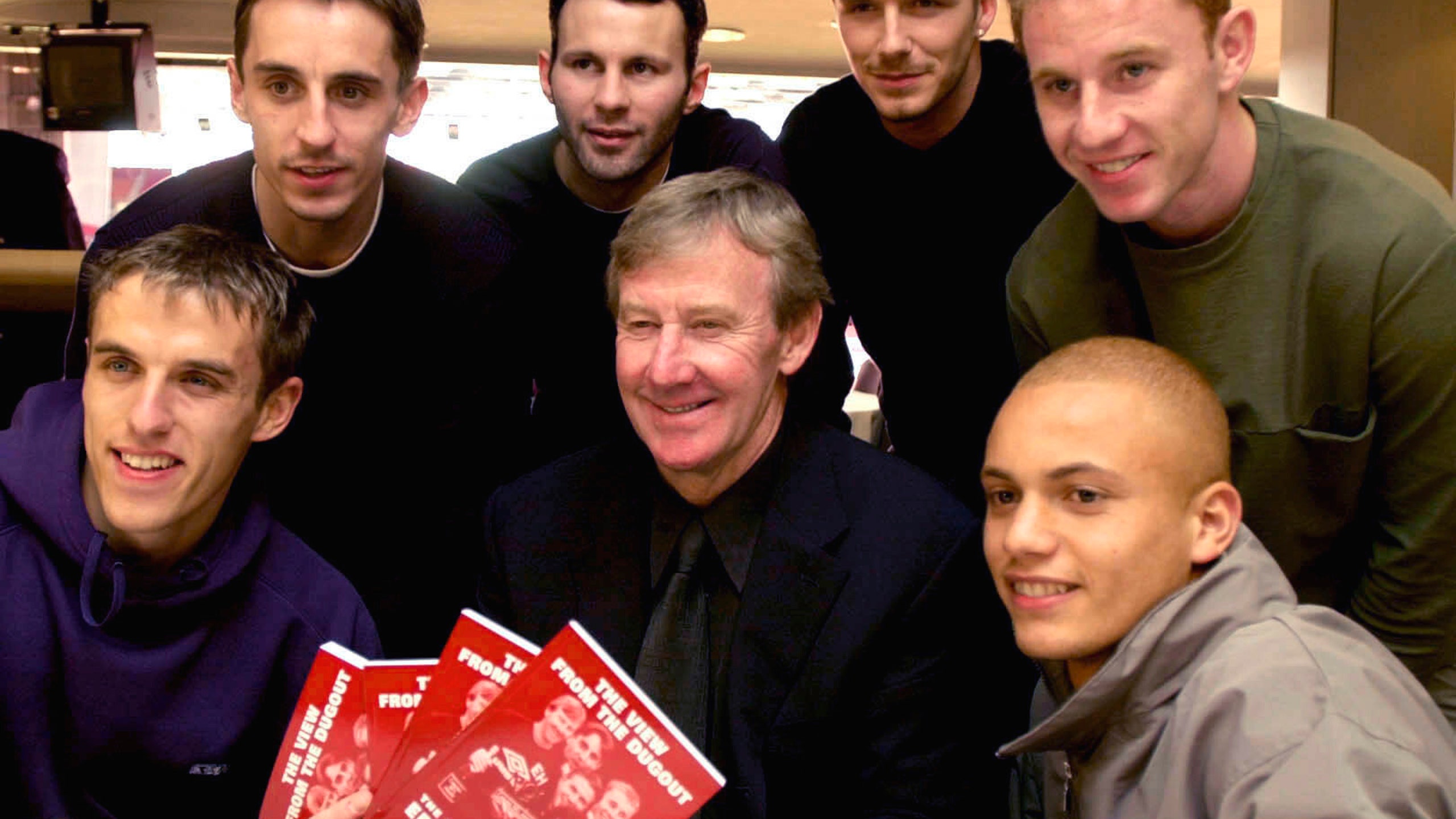 On the Manchester United training pitches, the youth team manager deployed tough love to hone the raw talents of Beckham and shape the careers of some of Britain's most successful players.

"As a kid (he) scared the hell out of me," Beckham recalled when Harrison was honored in Queen Elizabeth II's 2018 New Year's Honors List, "but prepared me for the career I was going to have for club and country."

Beckham went on to win titles with United, Real Madrid, Paris Saint-Germain and the Los Angeles Galaxy and captained England at World Cups but he never forgot Harrison, who died Wednesday at age 81. And certainly not the instructions bellowed out to the Londoner who joined the United academy as a 14-year-old.

"I can still hear him telling me NO MORE HOLLYWOOD PASSES," Beckham wrote on Instagram on Thursday. "I can still see him as we played on The Cliff training ground looking down on us either with a proud smile or a loud bang of his fist on the window knowing any minute he would be on his way down to probably advise me in the most polite way to stop playing those passes."

Harrison helped launch the career of Beckham as part of the renowned group of "Class of 92" players who won the 1992 Youth Cup. They formed the backbone of the United side that dominated the Premier League for two decades under Alex Ferguson.

Alongside Beckham, Harrison's graduates included Ryan Giggs, Paul Scholes, Nicky Butt and the Neville brothers, Phil and Gary. The six players signed a tribute written to Harrison that was posted on Beckham's Instagram account on Thursday.

"We've lost our mentor, our coach and the man who made us," Beckham's statement read. "He taught us how to play, how to never give up, how important it was to win your individual battles and what we needed to do to play for Manchester United Football Club."

United said Harrison died Wednesday but did not provide a cause of death. He was diagnosed with dementia four years ago.

"Eric's contribution to football and not just at Manchester United was incredible," said Ferguson, who led United from 1986-2013 and remains a club director. "He built character and determination in those young players and prepared them for the future."

Giggs, who once compared Harrison to an intimidating "sergeant major," and Scholes were still in the squad when United collected its record-extending 20th English title in 2013 as Ferguson retired.

"He was a teacher. He gave these players a path, a choice and he only did that through his own hard work and sacrifice," Ferguson said. "He was able to impart that education to the young, which made him one of the greatest coaches of our time. On a personal level, Eric had a wicked dry sense of humor and was straight talking, and I admired that in him."

Phil Neville, who has forged his own coaching career leading the England women's team, remembered Harrison as "our second father."

"He didn't prepare you for a life in football, he prepared you to actually succeed in life and the values he instilled into us — an unbelievable work ethic, the toughness of his attitude, the attention to detail," Neville told the BBC. "He would not let you get away with absolutely anything, on and off the pitch.

"The way you spoke to the canteen ladies, the kit man, the way you dressed, your timekeeping — they were values that stood us in good stead for all our lives."

Harrison was so dedicated to football that he played for hometown club Halifax against Shrewsbury hours after his October 1962 wedding to wife Shirley. In a career spent in the lower-leagues, far from the later wealth of Manchester United, Harrison also played for Hartlepool, Barrow, Southport and Scarborough.

"Not one coach or manager took me to one side and said they would work with me to improve certain aspects of my game," Harrison once said. "I was scared to say anything but I didn't think it was right. I resolved that if I ever got a job coaching, I would make sure the players got coached properly."

He gained experience as a coach at Everton before being hired by United in 1981 when Ron Atkinson was first-team manager. When Ferguson arrived at Old Trafford five years later, Harrison was tasked with reshaping academy operations which laid the foundations for the Class of 92 to emerge.

He retired in 1998 just before his former apprentices won the Champions League, Premier League and FA Cup in 1999. The queen honored Harrison's contribution to the game last year when she made him a Member of the Order of the British Empire, or MBE.

The Class of '92 remains united through its ownership stakes in fifth-tier club Salford City and some of the players went to visit their old mentor after he was diagnosed with dementia in 2014.

"We won't forget the life lessons he gave us," the Class of 92 players said. "Eric, we love you and owe you everything."