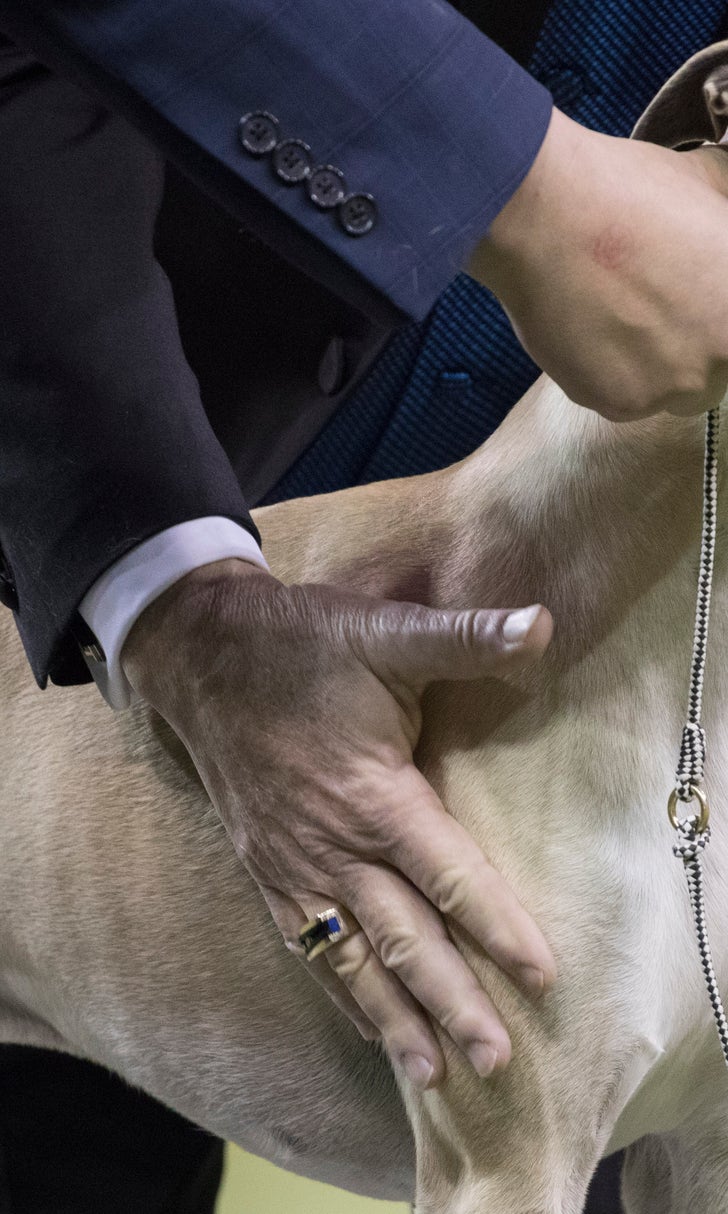 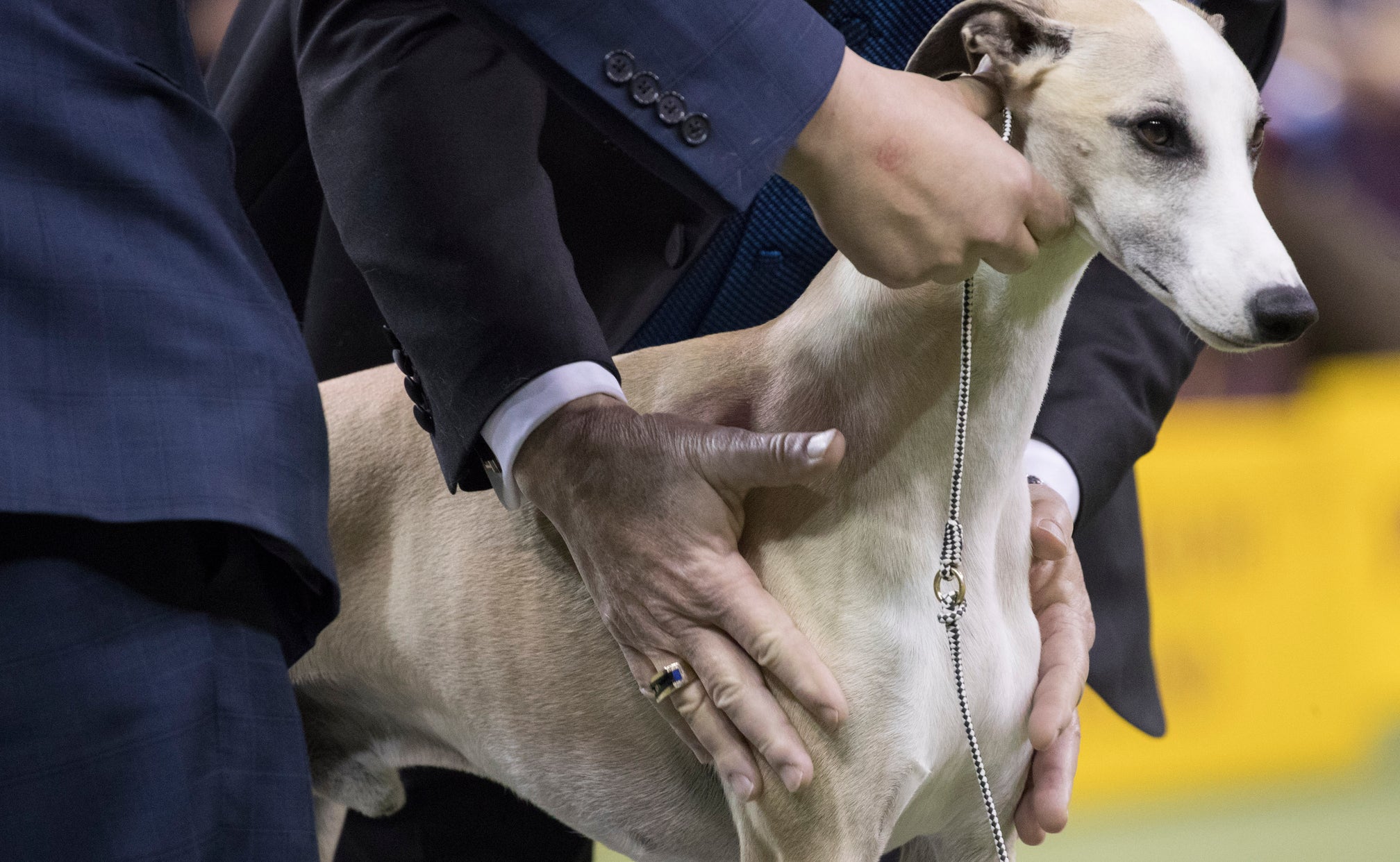 Win it for Vivi! Whiskey the whippet revs up for Westminster

NEW YORK (AP) — Sleek and aerodynamic, Whiskey the whippet is dashing through the dog show world.

He's among the fastest breed of pooches on the planet, and his rise has been rapid: Coming off big wins televised on Thanksgiving Day and New Year's Day, he'll now try for dogdom's Triple Crown starting Monday at the Westminster Kennel Club.

"He does his best at these high-profile rings," owner-breeder-handler Justin Smithey said. "He knows how to turn it off, lay down and wait till it's his turn. And then he just goes."

So let's make this fawn-and-white whippet the favorite to get picked Tuesday night and succeed Flynn the bichon frise as America's top dog.

There are more than 2,800 entries, including popular Biggie the pug, a Lhasa apso from Hawaii who surfs with his owner and the nation's No. 1-ranked qualifier last year, Grant the black cocker spaniel.

They come in 203 breeds and varieties, with the grand basset griffon Vendeen and the Nederlandse kooikerhondje ready to make their debuts on the green carpet of Madison Square Garden.

Jil Walton says she'll be rooting hard for Whiskey — "I really, really want that whippet to win!" she said.

See, she once brought a whippet to the Garden, too.

A lot of dogs have left Westminster with a legacy — Uno the baying beagle, heady Rufus the colored bull terrier, ol' Stump the Sussex spaniel — but few will ever match the lore of Vivi (VIH'-vee).

It was 2006, a day after the 3-year-old won an Award of Merit, an honorable mention for whippets. Set to get loaded at John F. Kennedy International Airport for a flight back to Los Angeles, she suddenly broke loose from her crate and took off.

Vivi bolted onto the runaway and airport workers gave chase, on foot and in cars.

Similar to greyhounds but smaller, whippets have tremendous acceleration and can sprint at 35 mph and up. In full flight, Vivi couldn't be caught, escaping through a fence and disappearing into the marshland.

More than 100 volunteers looked, thousands of fliers were posted. Pet psychics tried to communicate with her, a reward was offered. Dog owners all over the country worried and wondered: Where's Vivi?

Plenty of tips poured in during those early winter days and nights, supposedly she was seen in several parts of New York City. But none of those reports checked out.

As far as anyone knows, Vivi was never seen again.

"When I think about Vivi's Westminster, I still run a million scenarios through my head and end up getting sad," Walton, Vivi's co-owner, said this week. "But overall, Vivi's story did touch people and I was lucky enough to be touched by them as well."

And, a wishful thought.

"My silly hope is that my girl ended up happy on someone's couch," she said.

Smithey, who figures he's competed at Westminster about 15 times, grew quiet at the mention of Vivi.

Whiskey has already won the National Dog Show and the prized AKC event. Only Sadie the Scottish terrier in 2010 and Sky the wire fox terrier in 2014 have taken those two and Westminster.

Smithey, from Sugar Valley, Georgia, wants his 3-year-old with a champion's name of Pinnacle Tennessee Whiskey to become the second whippet to win best in show here. In 1964, Courtenay Fleetfoot of Pennyworth triumphed.

"There are 30 other whippets that would like to do the same thing," he said.

Among them is Whiskey's littermate, sister Bourbon. Last year at Westminster, Whiskey won best of breed and finished fourth in the hound group; Bourbon also was honored.

"They are big buds," Smithey said.

Walton, who is based in Kalispell, Montana, and spends her winters in Temecula, California, will be cheering from afar for Whiskey.

Maybe he can help bring it home, at last, for Vivi.

"That just sounds quite good in many ways," she said.