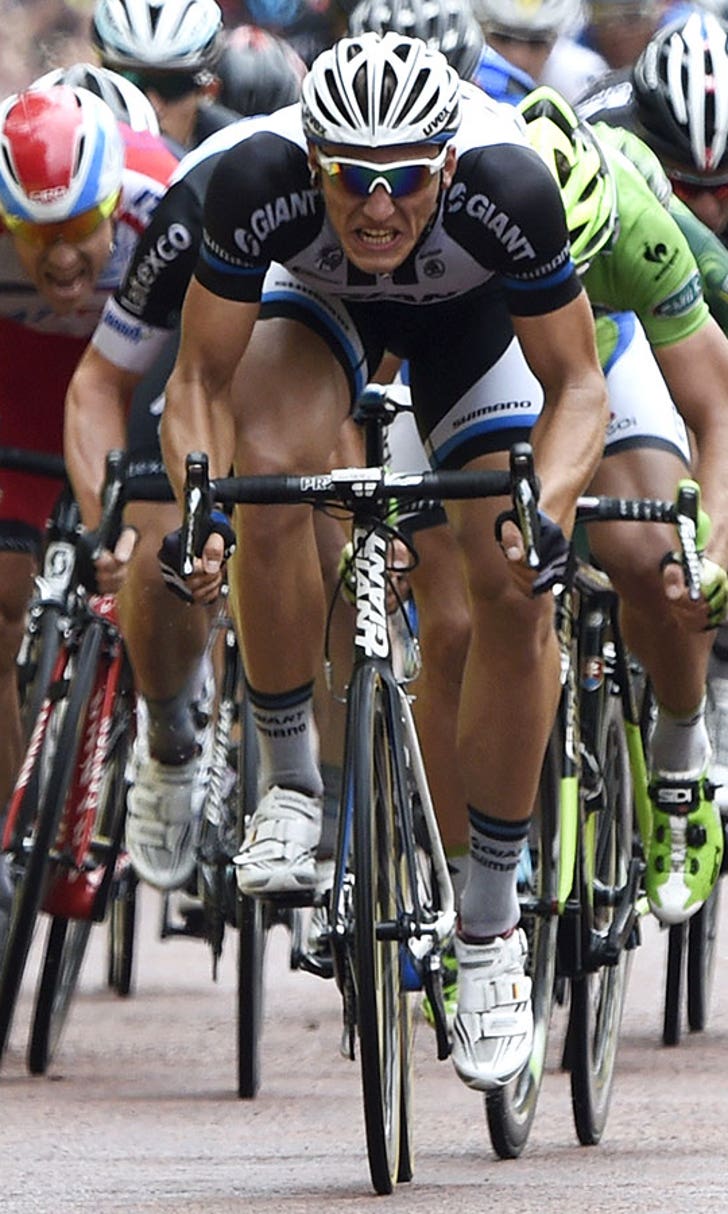 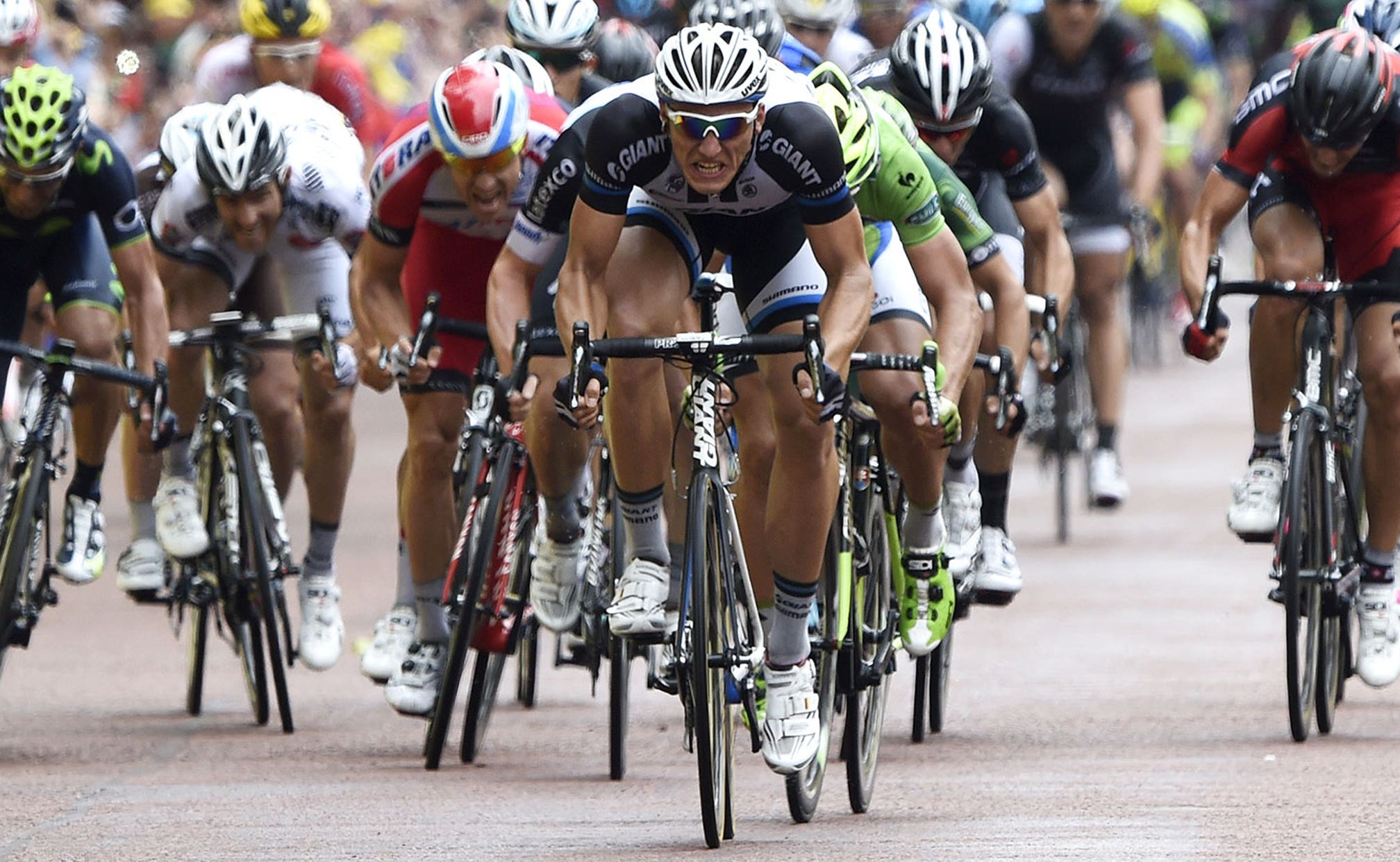 LONDON -- Germany's Marcel Kittel showed he may be the sprinter to beat at the Tour de France, speeding to his second stage win this year in Stage 3 on Monday as cycling's biggest race entered London before leaving England for France.

Rain in the City of London doused riders at the end of the 155-kilometer (96-mile) ride from the university town of Cambridge to a dramatic finish past landmarks Big Ben and Westminster.

Italy's Vincenzo Nibali retained the overall leader's yellow jersey with a 2-second lead over the most likely contenders to win the three-week race in Paris on July 27.

Kittel, led out perfectly by Giant-Shimano teammates, made it look easy as he sped down a final wide approach on The Mall with Buckingham Palace behind him. Peter Sagan of Slovakia was second and Australia's Mark Renshaw was third.

"I'm really really happy I could win in front of Buckingham Palace," said Kittel, who won four Tour stages last year. "It was one of the greatest finishes I've ever seen in front of this great scenery."

The hulking German made it a tale of two cities. He added London glory to his record after also winning on the Champs-Elysees in Paris, in the Tour finale last year. His job in the sprints got a lot easier after Britain's Mark Cavendish pulled out of the race after injuring his shoulder in a crash in Saturday's Stage 1.

"It's one big opponent that is not in the race anymore," Kittel said. "Of course, that changes things for me, but also for the team."

Kittel is no threat for the yellow jersey. Like many sprinters, he struggles on climbs and fell nearly 20 minutes behind Nibali in the overall standings in an up-and-down ride on Sunday through the hills and dales of Yorkshire.

Nibali's biggest challengers for the prized leader's shirt remain title-holder Chris Froome of Britain and Spain's Alberto Contador, who finished with the Italian in the 83-rider bunch behind Kittel.

On Monday, the pack cruised nervously and let two breakaway riders go free on Monday. The duo was caught with about 6 kilometers (4 miles) left.

The first three stages in England have been a runaway success with fans -- notably through Yorkshire's hills and dales -- with many Britons waving French flags and Union Jacks.

But the teeming curbs, sidewalks and roadsides again caused trouble for the riders. With about 30 kilometers (19 miles) left, 2010 Tour winner Andy Schleck of Luxembourg was among riders who crashed briefly, and French TV showed a fan on the ground. Schleck, who gingerly returned to the race, said he didn't hit a spectator.

"I guess it was my own fault," said Schleck, who collided with another rider and hurtled over his handlebars.

His Trek Factory Racing teammate Jens Voigt said: "I saw about 15 crashes today. In the end there were two guys on the ground but I don't know what happened exactly ... That's the Tour de France. The first week is always nervous."

Some fans got political. A few held up placards imploring Prime Minister David Cameron not to support a U.S.-European Union free trade pact. Three topless protesters bearing slogans condemning female genital mutilation staged a brief protest near the Houses of Parliament before police bundled them away and covered them with fluorescent vests.

Riders were flying across the English Channel for Tuesday's Stage 4 -- a 163.5-kilometer (105-mile) ride from Le Touquet-Paris Plage to Lille Metropole on the border with Belgium.

Froome's Team Sky released a glitzy video Monday saying that the Briton on June 1 became the first man to cycle through the Channel tunnel. In the video, Froome quipped: "This could be a really, really cool stage of a race."