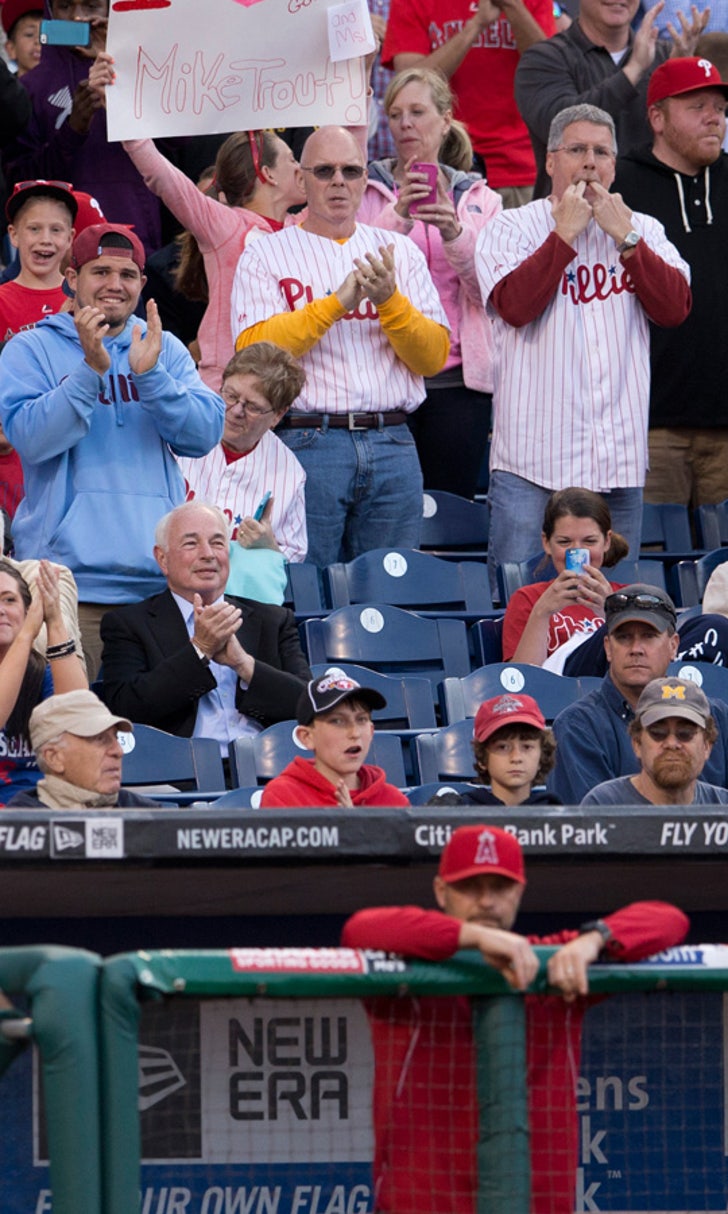 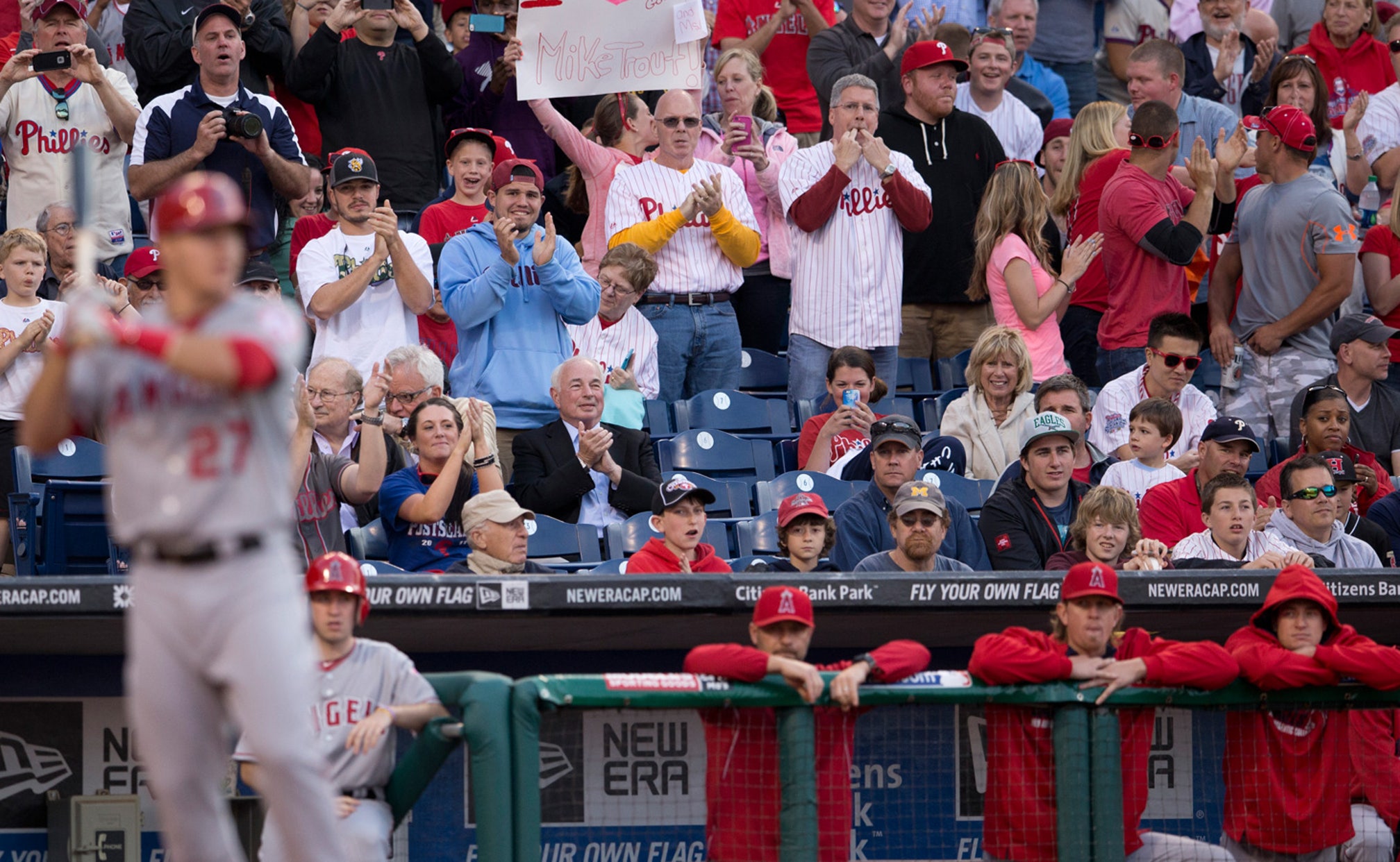 PHILADELPHIA (AP) -- Mike Trout got a rousing ovation from some of the same fans he cheers with on football Sundays.

More than 4,000 fans from Trout's hometown came out to see the two-time All-Star center fielder for the Los Angeles Angels play his first game in Philadelphia. Trout went 1 for 5 on Tuesday night in a 4-3 win over Cliff Lee and the Phillies.

"I got to see a lot of familiar faces, a lot of friends," Trout said. "It was a good feeling."

Trout grew up in small Millville, New Jersey, about 45 minutes south of Philadelphia. He used to root for the Phillies and celebrated their 2008 World Series victory on Broad Street. Trout remains a devoted Eagles fan and he watched their playoff loss to New Orleans on a frigid night at Lincoln Financial Field in January.

"Sitting in that crowd, if you had a Saints jersey on, you got booed," Trout said. "So it's a good feeling getting cheers. I got chills."

Mike Trout meets with the media, including a large contingent from his hometown. pic.twitter.com/6a6qGdOhQx

Fans wearing red No. 27 Angels jerseys filled the stands. Many carried signs welcoming home Trout. They gave him a standing ovation when he came to the plate in the first inning.

"It was an unbelievable feeling to get an ovation like that from fans wearing Angels jerseys and Phillies jerseys," Trout said. "That was pretty cool and it means a lot to me and my family."

The Millville High School baseball team was among those in the crowd. Trout made sure those players got to watch batting practice on the field.

"I would've loved that, watching major league BP, when I was there a few years ago," he said.

. @Trouty20's high school squad, the Thunderbolts are here as part of Millville Night. Is the next Trout in this shot pic.twitter.com/tYF1zPKdD4

Trout grounded out to shortstop in the first before lining a single to center in the fourth off Lee. He clapped his hands after rounding first and fans cheered loudly.

"I felt good at the plate, but I missed some pitches," he said.

Trout struck out swinging in the sixth, reached on third baseman Cody Asche's fielding error in the seventh and flied out to right in the ninth.

The Phillies dubbed it "Millville Night" at Citizens Bank Park. A video tribute to the town was shown before the game. Millville Mayor Michael Santiago threw out the first pitch.

Trout still lives with his parents in Millville during the offseason. He was the AL Rookie of the Year in 2012 and finished runner-up to Miguel Cabrera for AL MVP in 2012 and 2013.

"He plays that style of baseball that they will appreciate here," said Angels outfielder Raul Ibanez, a key member on the Phillies' NL pennant club in 2009.

When the Phillies beat the Tampa Bay Rays in Game 5 to win the World Series in 2008, the 17-year-old Trout watched the game from the parking lot with friends because he didn't have tickets.

Trout's arrival helped the Phillies draw their second-largest crowd of the season, with 41,959 on hand.

The Phillies took a 2-0 lead into the sixth before the Angels scored four unearned runs. Luis Jimenez had a tiebreaking, two-run double and then made a diving grab to turn an unassisted double play in the bottom half.

"That was big, the hit and the great play," Trout said.

Matt Shoemaker allowed two runs and three hits in five innings to earn his first career win. Shoemaker made his second career start and first this season. The righty was called up to replace Hector Santiago, who was sent to the bullpen after going 0-6 with a 5.19 ERA in seven starts.

But this was Trout's night.

"To think a couple years ago that I would be playing here, not watching, but actually playing, is a special feeling," Trout said.

NOTES: The Angels optioned RHP Cory Rasmus to Triple-A Salt Lake. ... Trout was 3 for 19 before his single off Lee in the third. ... Shoemaker sacrificed in his first plate appearance since high school. He never batted in college or in the minors. ... The Angels played their first game in Philadelphia since sweeping a three-game series in 2008. ... RHP A.J. Burnett (2-2, 2.90) goes for the Phillies against RHP Garrett Richards (3-0, 2.80) on Wednesday.