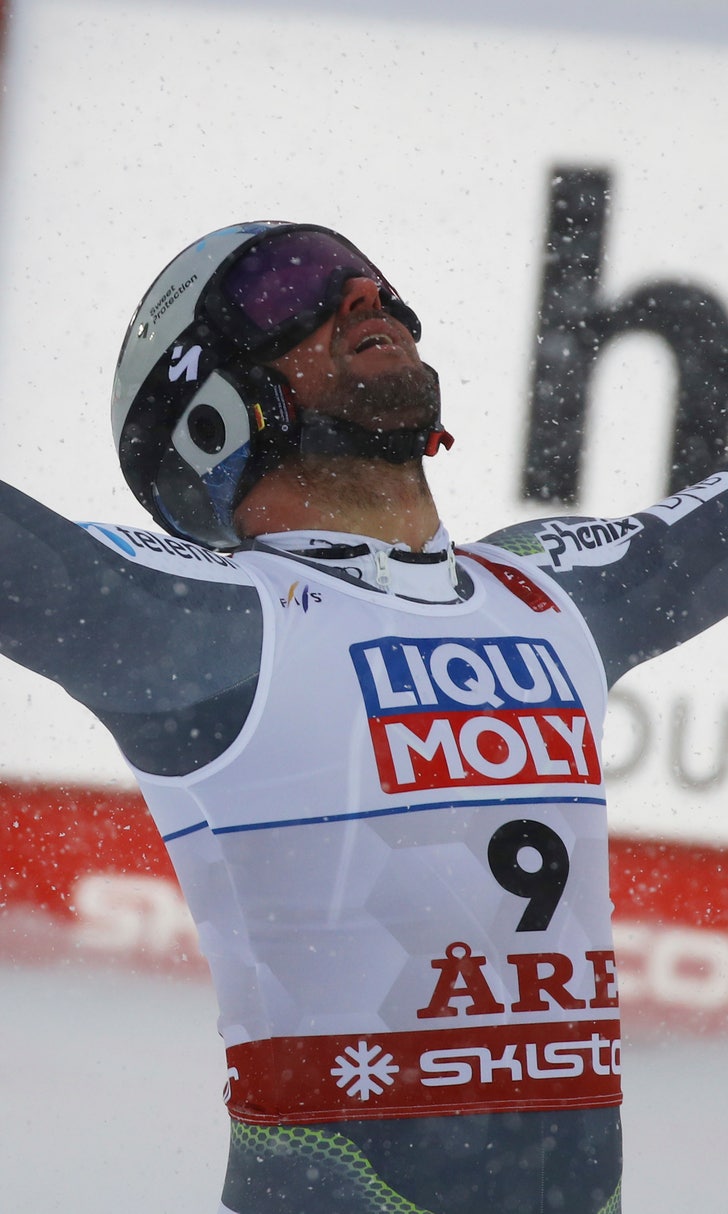 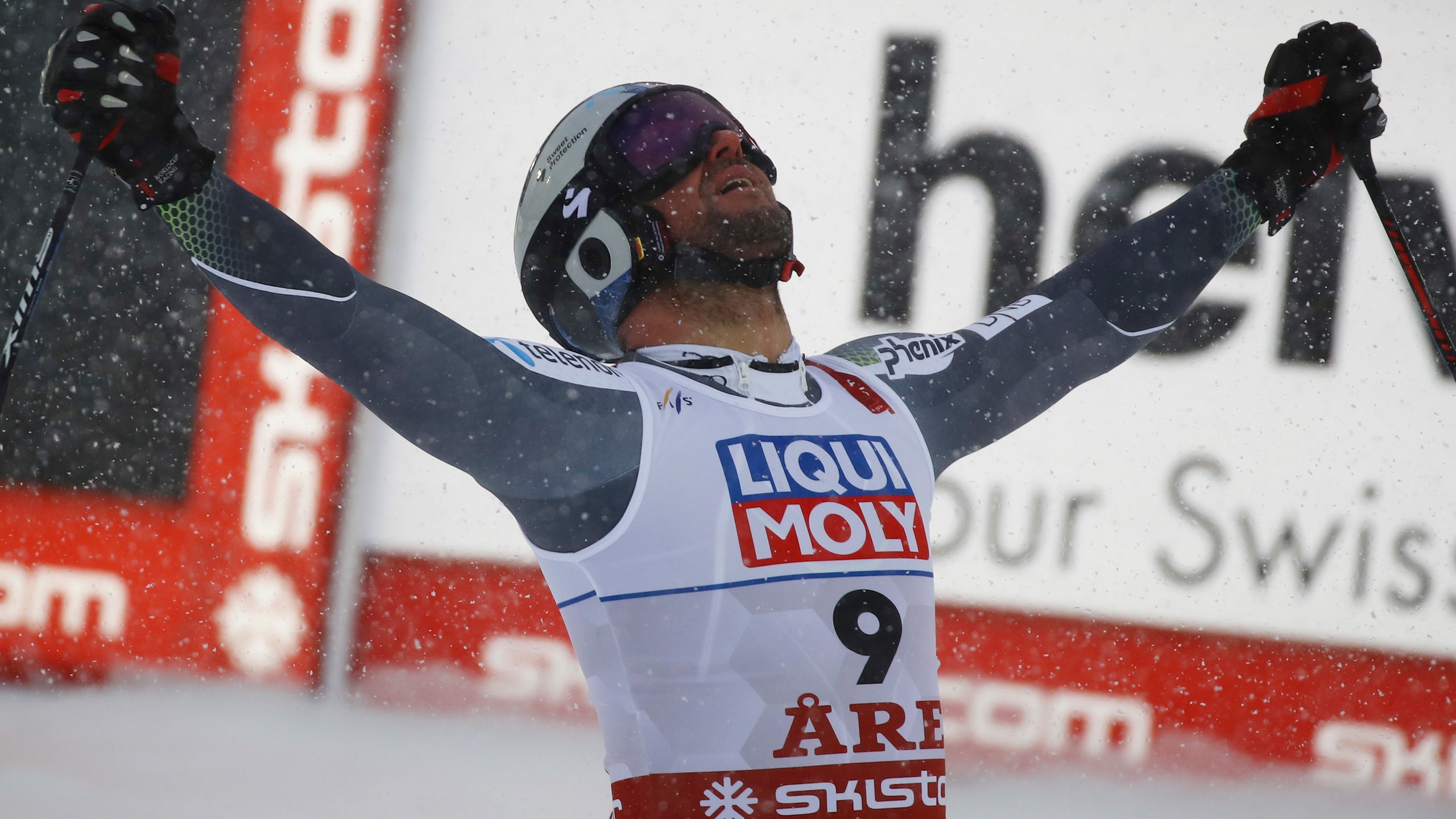 Svindal beaten by teammate Jansrud in his final race

ARE, Sweden (AP) — Aksel Lund Svindal stretched out his arms and looked to the snow-filled sky, soaking in a big skiing atmosphere one last time as thousands of flag-waving Norwegians cheered their idol at the finish area.

Didn't matter that he'd been beaten to gold — by 0.02 seconds, no less — by teammate Kjetil Jansrud in the final race of his illustrious, medal-filled, 17-year career.

Silver, gold, whatever; he was simply going to savor the moment.

Svindal, who is retiring at age 36 following persistent knee injuries, was beaming as he shared the top step of the podium with Jansrud — his close friend and training partner for two decades — after the downhill at the world championships on Saturday.

Vincent Kriechmayr, the bronze medalist from Austria, was happy to leave the stage, clearly feeling like an imposter on a day which turned out pretty much perfect for the legions of Norwegians who crossed the Swedish border to see Svindal's last race. Crown Prince Haakon and Crown Princess Mette-Marit were among them.

"It was a little poetic in that we've shared so many hours of training together," Jansrud said. "With all the previous wins we've had and to be able to be on the podium together one last time, it's like a fairytale."

The bromance continued in the medal ceremony hours later, Jansrud proffering Svindal forward to take the acclaim of spectators in the plaza in the middle of Are.

In many ways, this was a shared victory.

After the start was delayed because of fog and heavy snowfall, Jansrud — racing with two broken bones in his hand after a fall in training 2 1/2 weeks ago — went out at No. 6 and set a fierce pace on a shortened course, taking 0.65 seconds off the time of Matthias Mayer.

Svindal, the two-time Olympic champion and five-time world champion, came down three racers later and admitted to being nervous. He was 0.08 seconds ahead at the first checkpoint, 0.02 behind at the second, and then 0.10 adrift as he came round the final few bends of his skiing career. He soared down the hill and over the line, to almost deafening roars.

"Aksel you are my hero," read one sign held aloft in the grandstand.

Svindal playfully pointed at Jansrud, who was sitting in the leader's throne, after acknowledging the crowd. They both knew they'd posted times that would be hard to beat, and that proved to be the case.

"They are really good at finding the fast lines quickly," said Bryce Bennett, the top U.S. finisher at No. 9. "Today is pretty cool to be a part of, that he (Svindal) was on the podium in his last race."

While Svindal just missed out on a chance to become the first man to win the downhill world title three times, he still joined Kjetil Andre Aamodt and Marc Girardelli as the only skiers to collect a medal at six world championships.

Already an Olympic champion in super-G at the 2014 Sochi Olympics, this is Jansrud's first world title, adding to his two silvers at worlds. A big Liverpool soccer fan, he compared the feeling of skiing into the atmospheric finish area at Are to how he envisaged it would be like scoring a goal at Anfield.

"It is one of the biggest come-to-the-finish moments of my career," Jansrud said. "I got a little taste of how a soccer player feels every weekend."

Following his fall in training in Kitzbuehel, Austria, Jansrud was told by doctors to sit out for six weeks. He couldn't pass up the chance of racing at a worlds so close to home, though.

"They said (the injury) is not going to be good enough for Are," Jansrud said. "But somehow you get this singular focus to make it happen."

"This was something that I missed up until now," Jansrud added about his missed opportunities in previous worlds. "So that makes it bigger."

Beat Feuz of Switzerland, the previous downhill champion, finished fourth and Mayer, the former Olympic downhill champion from Austria, came fifth. They were mere footnotes on an afternoon that was as much about Svindal as the guy who won gold.

"They were so close, but this silver is like gold for us," said Anders Holm, a 39-year-old from Trondheim, Norway, who was at the race with his wife and two children.

Svindal bowed to the roaring crowd during the flower ceremony and again when collecting his medal.

"This is more than I expected, to be honest," Svindal said. "I knew I was fast enough to win or take a medal, but to make it happen on the one day it counts is something else.

"When I wake up tomorrow morning, I'll still be happy with this decision. It's time to kick back and enjoy this from the spectators' side of everything."