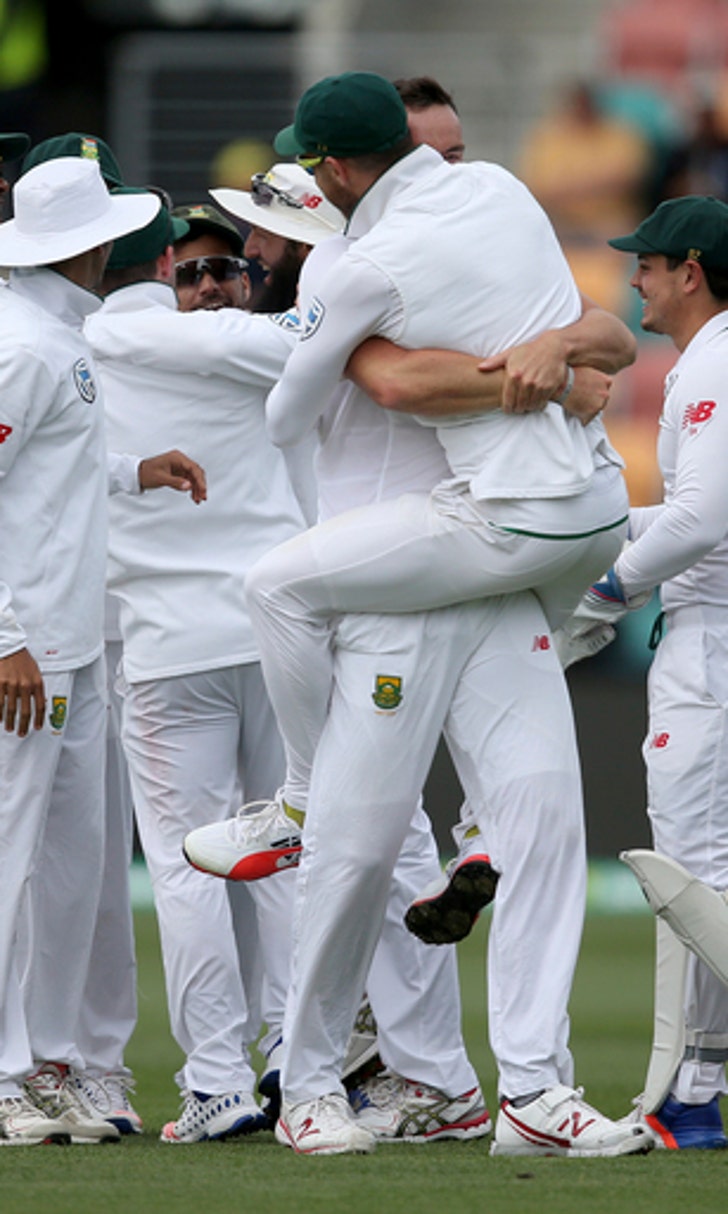 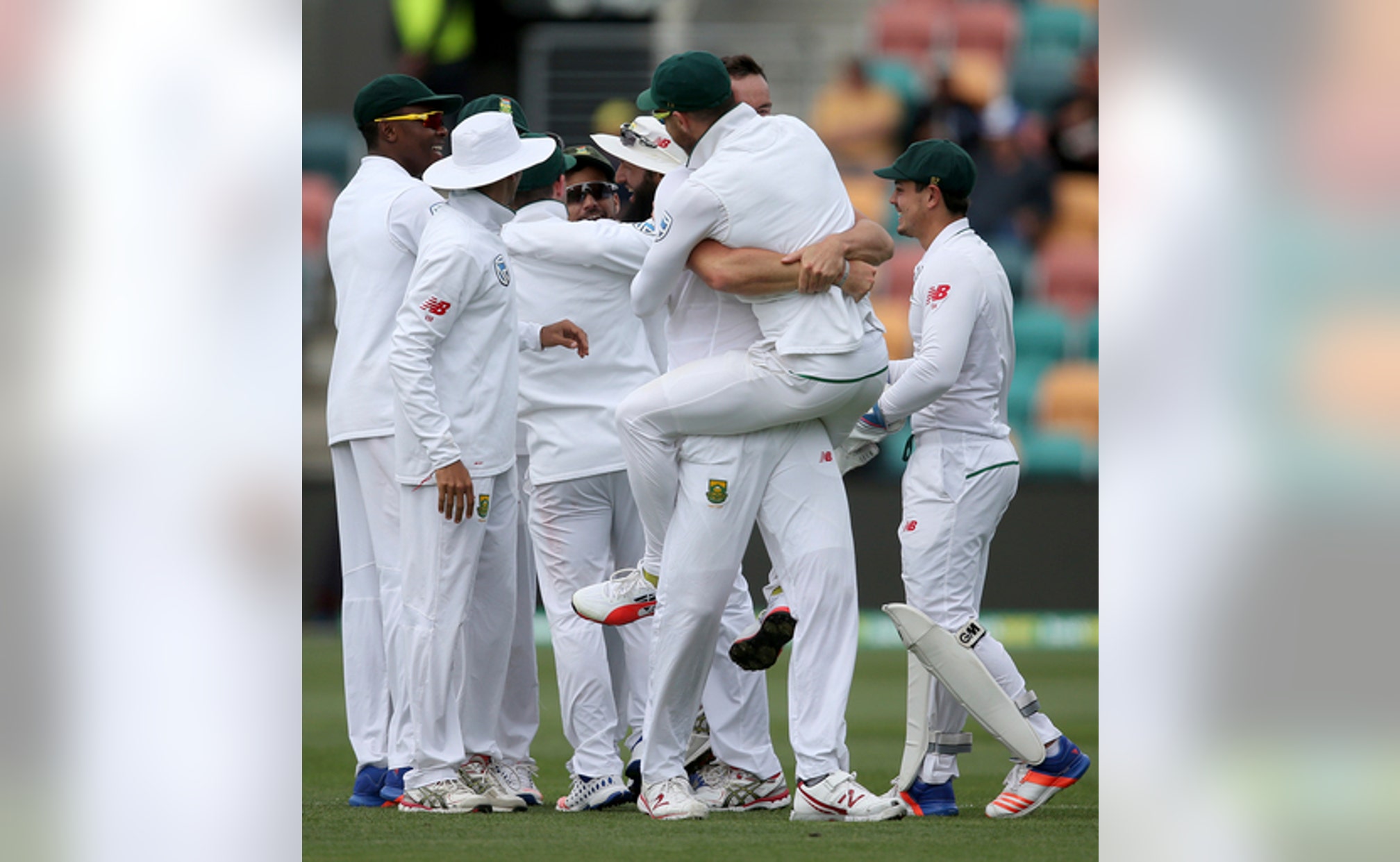 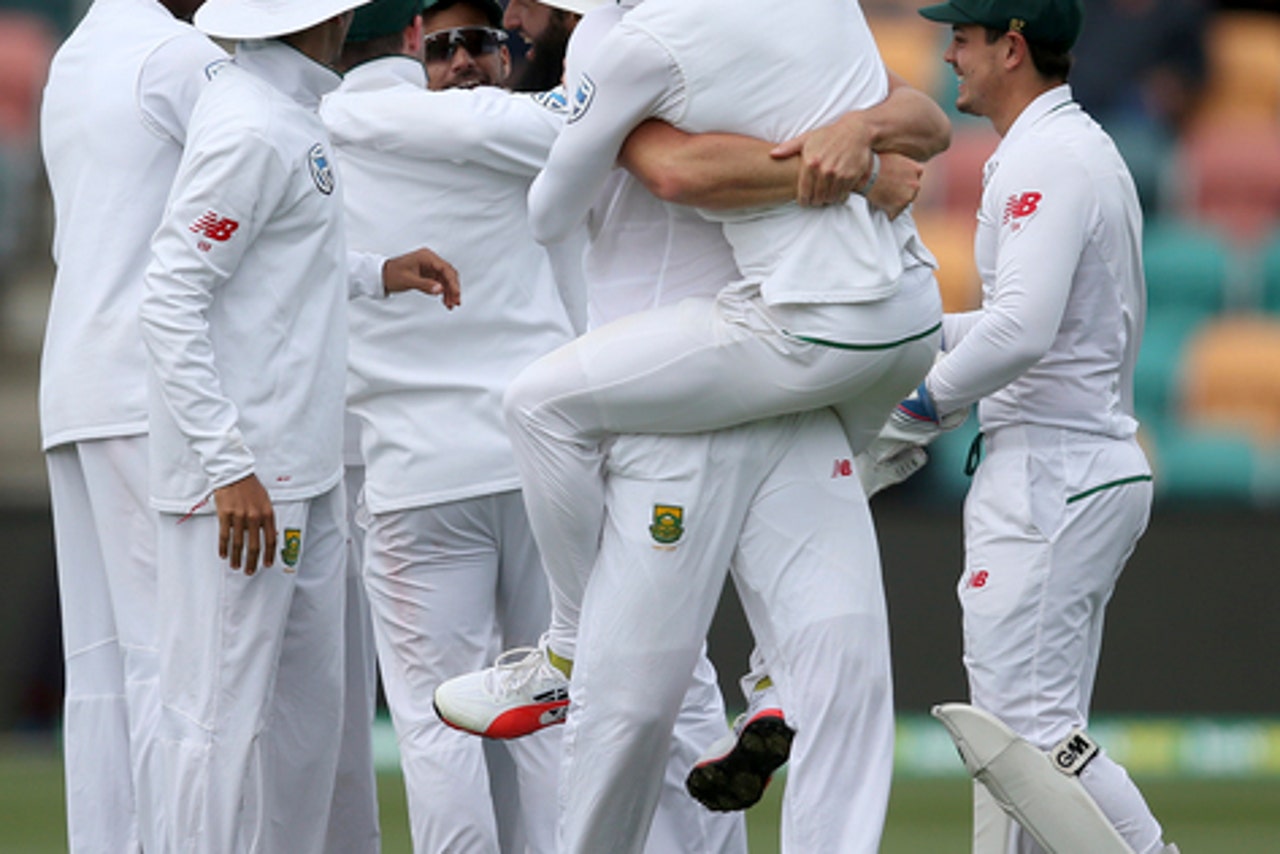 HOBART, Australia (AP) South Africa clinched its three-test series in Australia with a match to spare on Tuesday, leaving Steve Smith's team facing the prospect of an unprecedented sweep on home soil after yet another woeful batting performance.

With the 177-run win in Perth and the innings and 80-run victory in Hobart, South Africa secured its third consecutive test series win in Australia - following victories in 2008-09 and 2012-13 - and handed Smith a fifth straight test defeat as Australia captain.

The Australians were ranked No. 1 until being swept 3-0 in Sri Lanka in July. South Africa entered the series without inspirational captain A.B. de Villiers, was ranked No. 5 and lost strike bowler Dale Steyn early in the opening match in Perth.

Yet it's the Australians who are in disarray.

Selectors are scrambling to assemble a team that can bat for a day in time for the third test, a day-night match which starts Nov. 24 in Adelaide. It's only the second day-night test ever played in Australia, 12 months after a low-scoring win over New Zealand in the first. It also presents the South African pacemen with an ideal chance to exploit the brittle batting lineup that has been exposed in this series with collapses of 10-86 in Perth, 85 all out on the opening day in Hobart, and 8-32 on Tuesday.

Australia has never been swept in a test series on home soil, and is in grave danger of ending that streak.

''That's the mission for us now, we want to do that very badly,'' said Faf du Plessis, who was standing in for de Villers as captain. ''We won't just rest on our laurels. We've got Australia in a position where they're under pressure and won't let that go.

''It's hard enough to get them in this position, so we'll do everything we can to keep them there.''

The Australians resumed on day four of the second test at 121 for two, still needing 120 more to make South Africa bat again.

Usman Khawaja top-scored with 64 but was out swiping at a ball from Kyle Abbott and edging behind, triggering the staggering collapse. Australia slumped from 129-2 to all out for 166 before lunch.

Abbott, who was called up to replace Steyn for the second test, returned 6-77 and Kagiso Rabada, playing his 10th test and already showing promise well beyond his experience, had 4-34 in conditions that were good but not unnaturally advantageous for swing or seam movement.

It was almost a repeat of day one, when South Africa sent Australia in to bat and had the hosts 8-4 before Smith's unbeaten 48 helped the home team narrowly avoid some unwanted records. The South Africans replied with 326, with Quinton de Kock scoring 104 and sharing a 144-run partnership with Temba Bavuma (74), to set up a 241-run lead.

It was all over in 19.2 overs on day four. With rain preventing any play on Sunday, and other disruptions for showers or bad light, the Hobart test was decided inside only seven sessions.

''We've got to find a way to be a bit more resilient and turn things around because we're not in a great place. Whether it's seaming, swinging or spinning we're having some trouble,'' Smith said. ''We've lost five consecutive test matches - that's not good enough for an Australian team.

''We need to find a way to have a bit more fight and hunger, and a bit more pride.''

Australia's worst recent run was around the tumultuous end to South African Mickey Arthur's tenure as Australia coach, when it was swept 4-0 in India and the team was riddled with acrimony. Darren Lehmann took over at the start of the 2013 Ashes series and lost the first two tests in England before the losing streak ended at six - with a draw.

Since then, the Australians have been rebuilding but cracks have appeared recently, and South Africa had the right ingredients to exploit them. Now the whole set up, from Lehmann to the top administrators, is under pressure.

''It's definitely attitude. It's an aggressive attitude that makes sure you're always in the opposition's faces,'' du Plessis explained of South Africa's approach to the series. ''If you want to beat Australia, you have to play that sort of game. I think we did that better than them.''