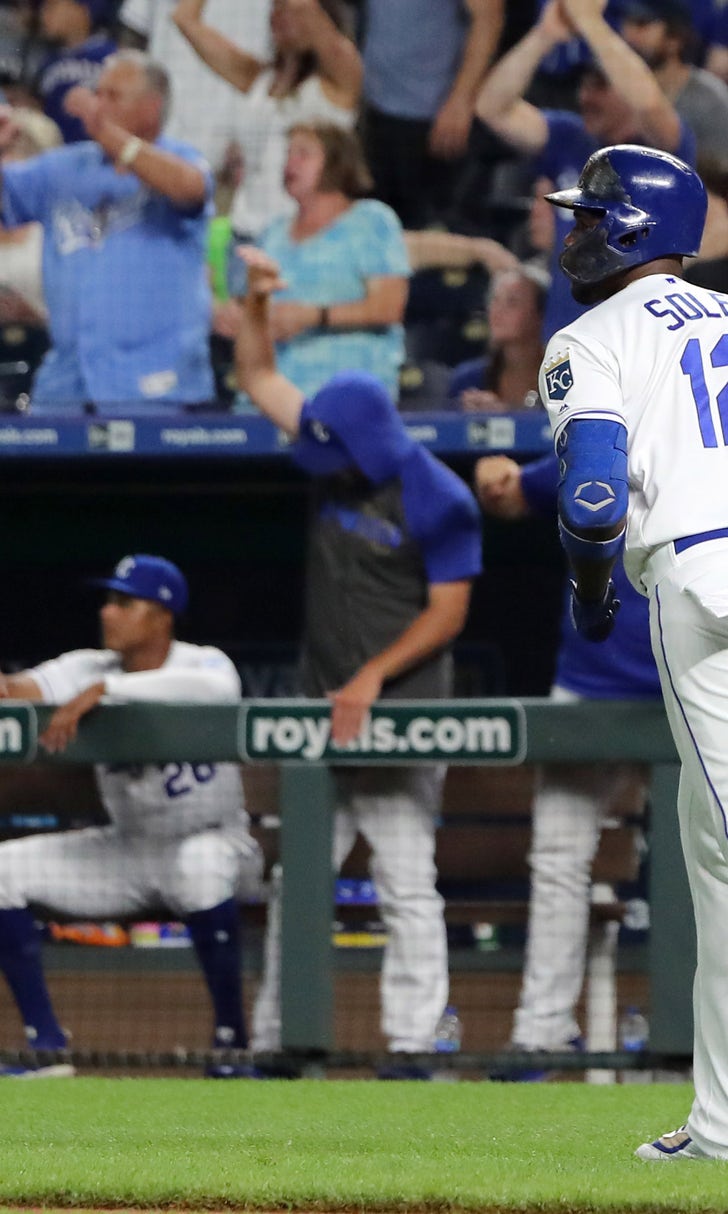 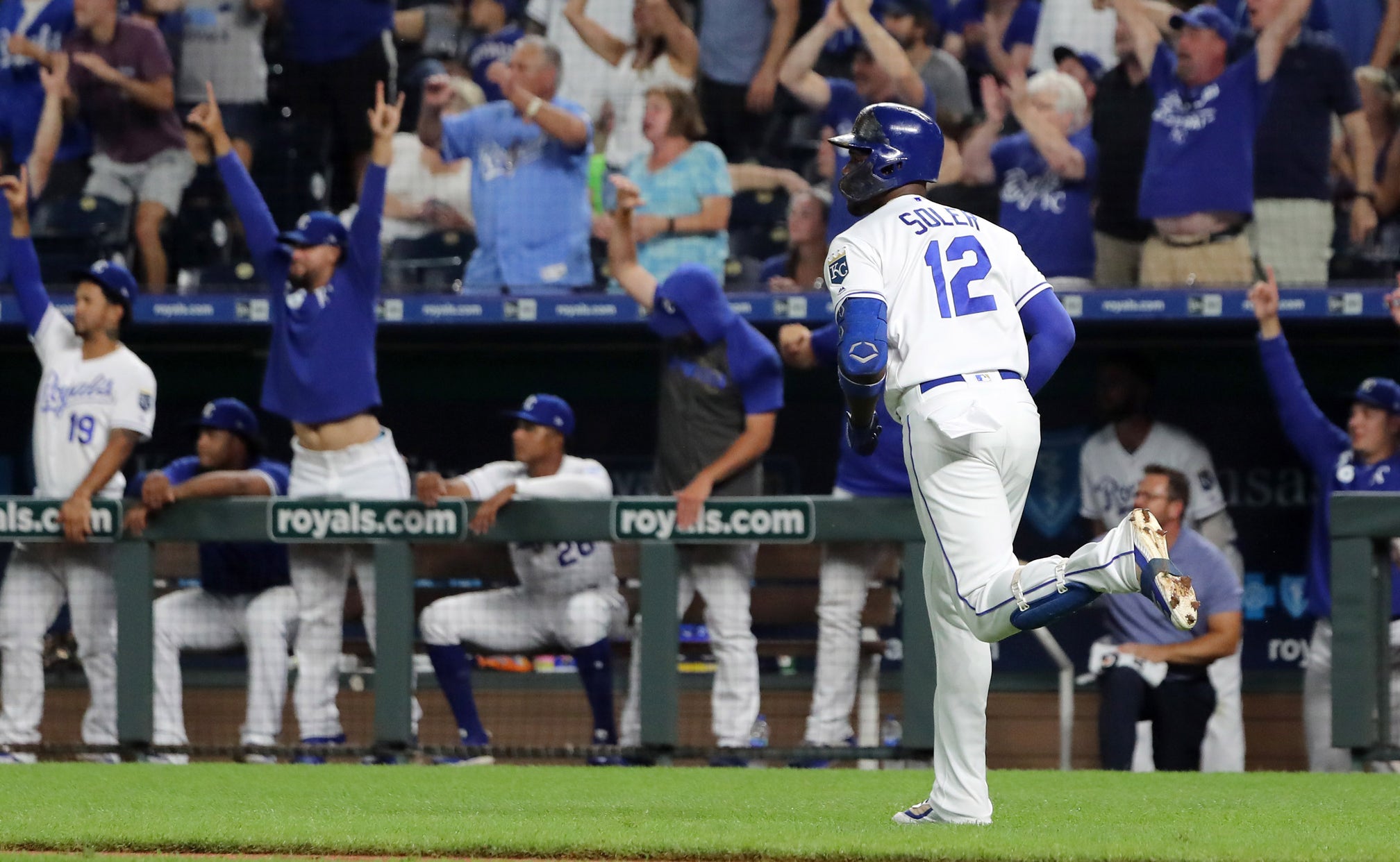 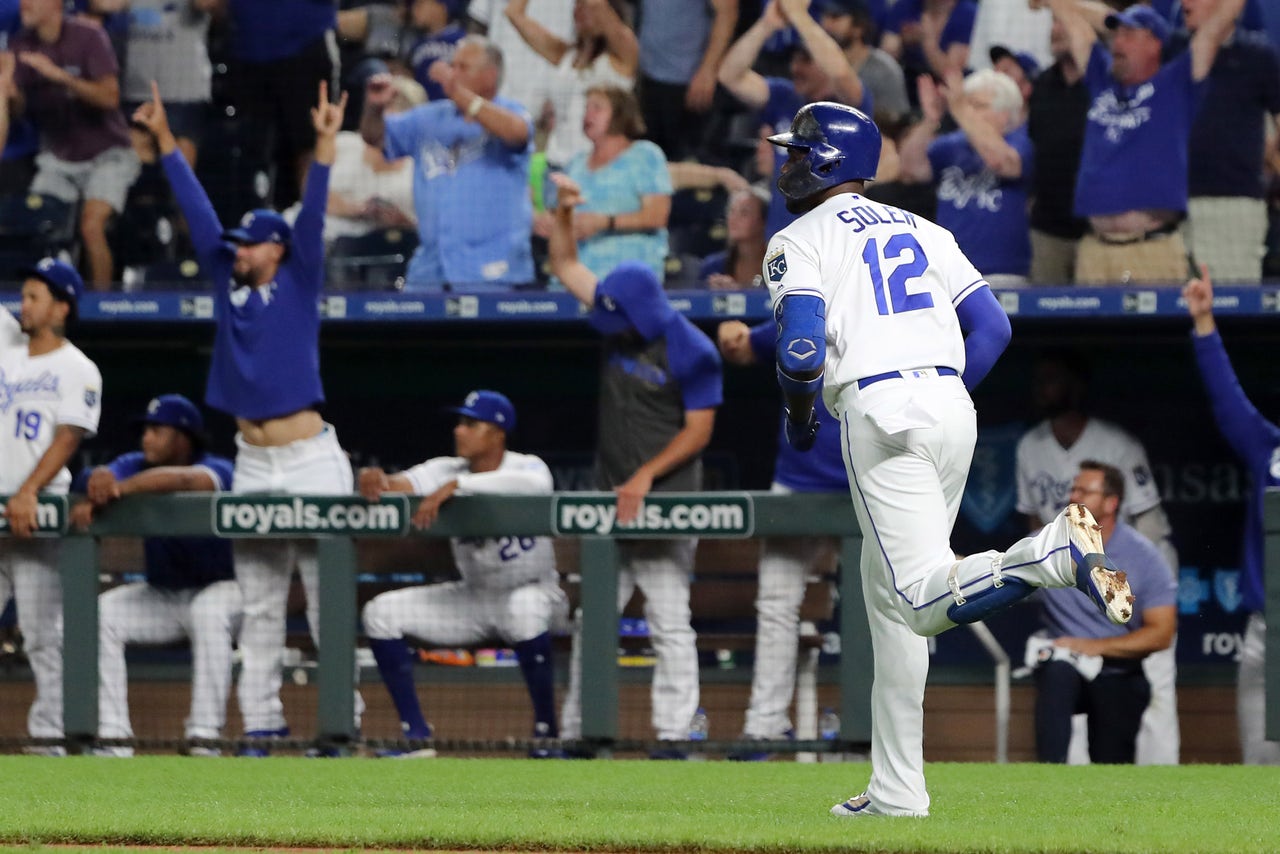 KANSAS CITY, Mo.  — Jorge Soler got Kansas City going with a record-breaking home run before Ryan O'Hearn ended the game with one swing of his bat.

Soler eclipsed the franchise home run mark with his 39th homer of the season and O'Hearn hit a pinch-hit, game-ending home run in the bottom of the ninth to lift the Royals to a 6-5 win over the Detroit Tigers on Tuesday night.

O'Hearn sent the first pitch he saw from Zac Reininger (0-1) in the ninth inning over the fence in right field after a seesaw final three innings.

"First-pitch heater, out over the plate, I just freaking blacked out, I don't know. I swung hard and it was good," O'Hearn said. "That was awesome."

Tigers' starter Daniel Norris grooved Soler a 2-2 fastball in the third inning and the Royals' slugger didn't miss. The three-run shot broke a tie with Mike Moustakas, who set the previous record with 38 home runs in 2017.

"You know it's coming, but you still want to see it," Royals manager Ned Yost said. "It's such a tough game, you just never know. You don't know what could happen that can derail your attempt at breaking a record so he's got it now. Every home run from here on out is going to break the record and that's cool."

The home run also gave Soler 100 RBIs on the season, becoming the first Royal to cross the century mark since Eric Hosmer in 2016.

"There's a lot of emotions going on right now," Soler said. "Maybe when I get home, but right now, it still hasn't sunk in."

Before slugging a walk-off homer, O'Hearn says he was preparing for his opportunity to pinch-hit: "I was on the machine about three innings in a row, just waiting for my shot. That was awesome." #AlwaysRoyal pic.twitter.com/4wzXC7ldy7

Mike Montgomery was solid once again, allowing one run on six hits in 5 2/3 innings. Montgomery has now allowed one earned run or fewer in four of his last five starts and has a 2.10 ERA and 30 strikeouts in 30 innings over that span.

Whit Merrifield had three hits, upping his season total to 176, just one back of Boston's Rafael Devers for the MLB lead.

The Tigers scored four runs from the seventh inning on to twice rally from deficits. Brandon Dixon put Detroit up 4-3 in the eighth inning with a sacrifice fly to score Jeimer Candelario, then tied the game in the ninth on Ronny Rodriguez's single, but Alex Gordon threw out Willi Castro at home to end the inning.

Gordon tied the game in the bottom of the eighth, legging out an infield single and Soler put the Royals up 5-4, racing home on a wild pitch.

"It got crazy there at the end," Tigers manager Ron Gardenhire said. "We had our chances and didn't make enough pitches."

Ian Kennedy (2-2) blew his fourth save of the season but got the win thanks to O'Hearn.

Playing in his first major league game since June 13, Grayson Greiner was at the center of the Tigers' offense from the No. 9 hole in the lineup. He laced an RBI single in the third inning to put Detroit up 1-0, then scored on Victor Reyes' RBI double in the seventh inning to bring Detroit within one, 3-2.

Greiner finished with three hits and Reyes had a career-high had four hits, including two doubles, for his fifth straight multi-hit game. Reyes is hitting .591 (13 for 22) in those games.

Both teams recalled a number of players prior to Tuesday's game. The Royals brought up 1B Ryan McBroom, who was acquired Saturday from the New York Yankees, INF/OF Erick Mejia and LHP Gabe Speier. Kansas City also activated RHP Jesse Hahn from the 60-day injured list, who had Tommy John surgery in August 2018. He hasn't pitched in the major leagues since 2017.

"It's good to get some reinforcements up, especially some pitching," Gardenhire said. "That's going to help us out and give us a little better chance of getting the right people in there. It's fun for them. They're excited to be back here. We've got a full clubhouse."

McBroom made his major league debut Tuesday, getting the start at first base. McBroom was one of the most dangerous hitters in the International League this season, hitting .315 with 26 home runs in 117 games for Triple-A Scranton Wilkes-Barre and led the league with 87 runs scored and a .976 OPS

The 27-year-old McBroom singled to right-center in his first plate appearance and finished the game 1 for 3 with a walk.

Royals: RHP Jakob Junis (8-12) will make his fourth start of the season against Detroit on Wednesday. Junis has found plenty of success in his career against the Tigers with a 7-1 record, 3.18 ERA and 59 strikeouts in 11 appearances, 10 starts, his most wins and strikeouts against any team.

Tigers: Edwin Jackson (3-8) will start for Detroit, looking to snap a 3-game losing streak. Jackson lasted just 2 1/3 innings in his last outing Friday against Minnesota when he allowed eight runs on seven hits and walked three.