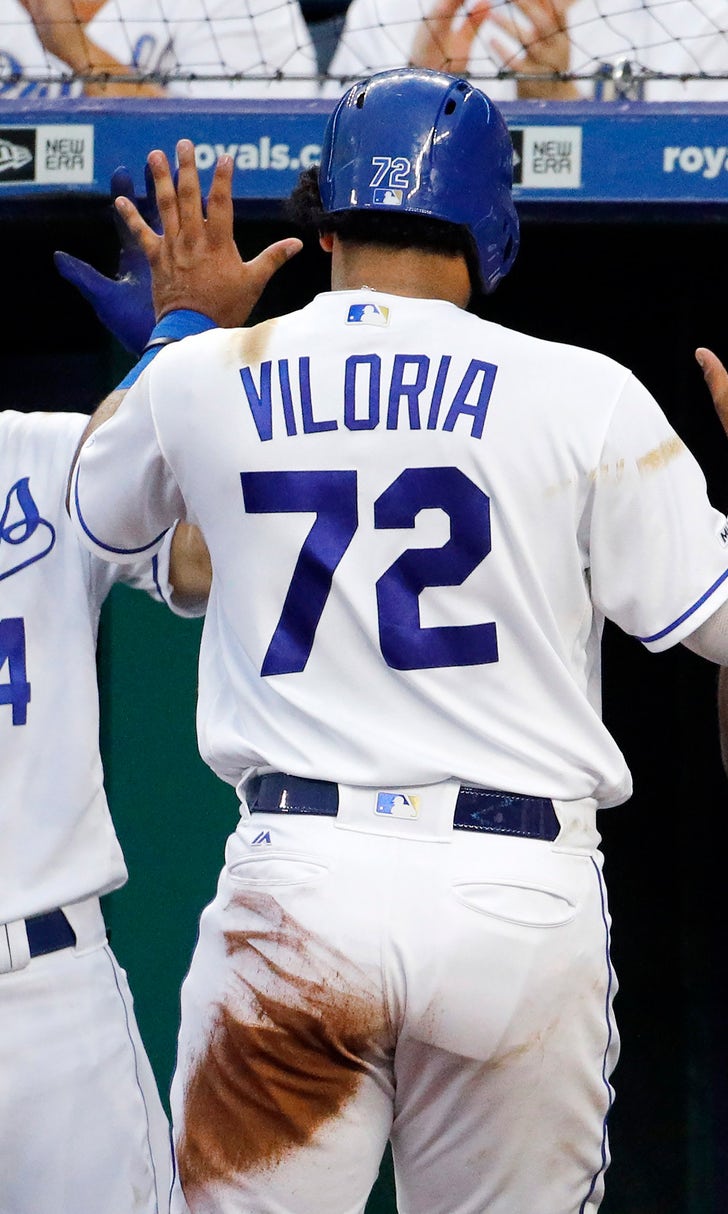 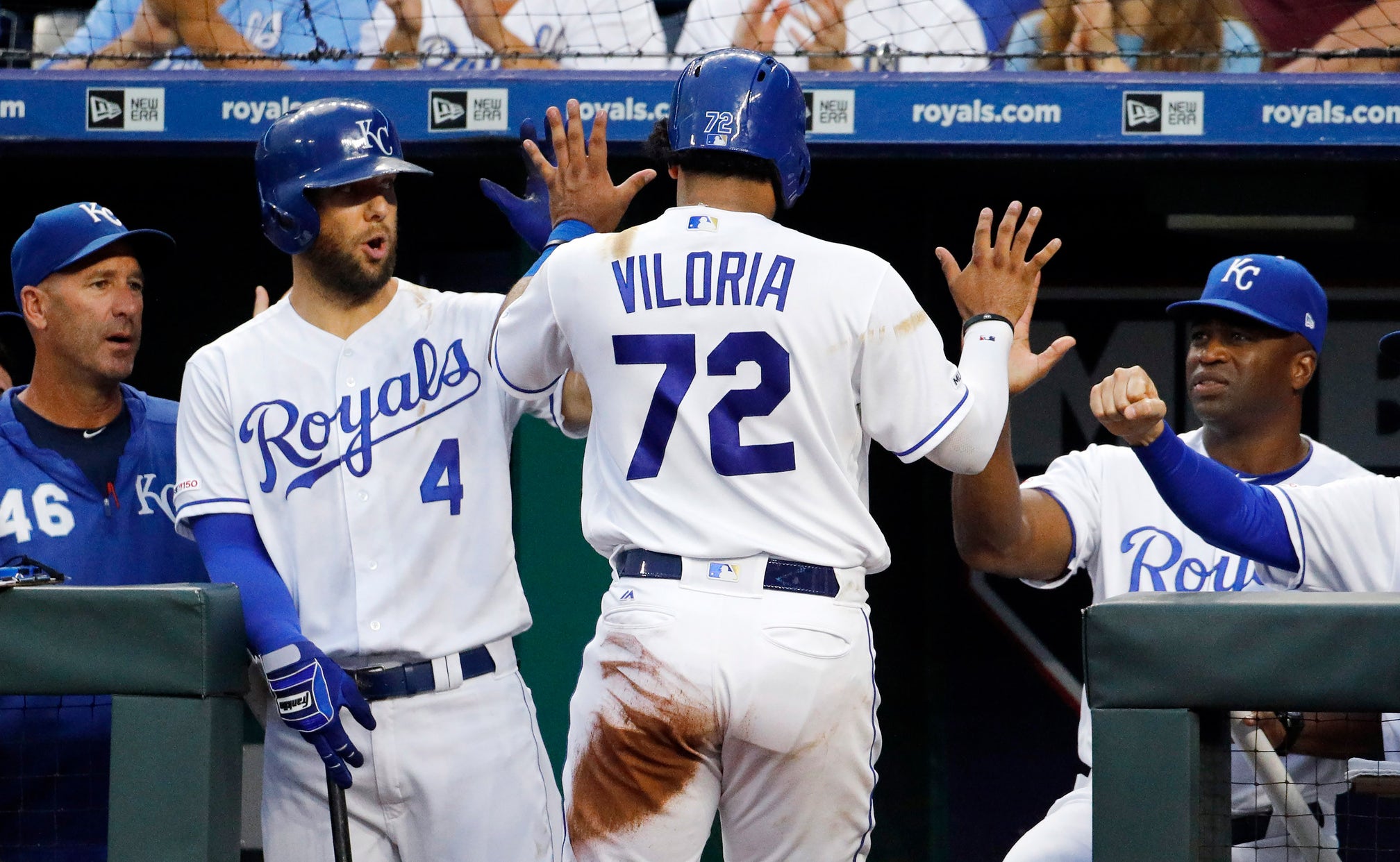 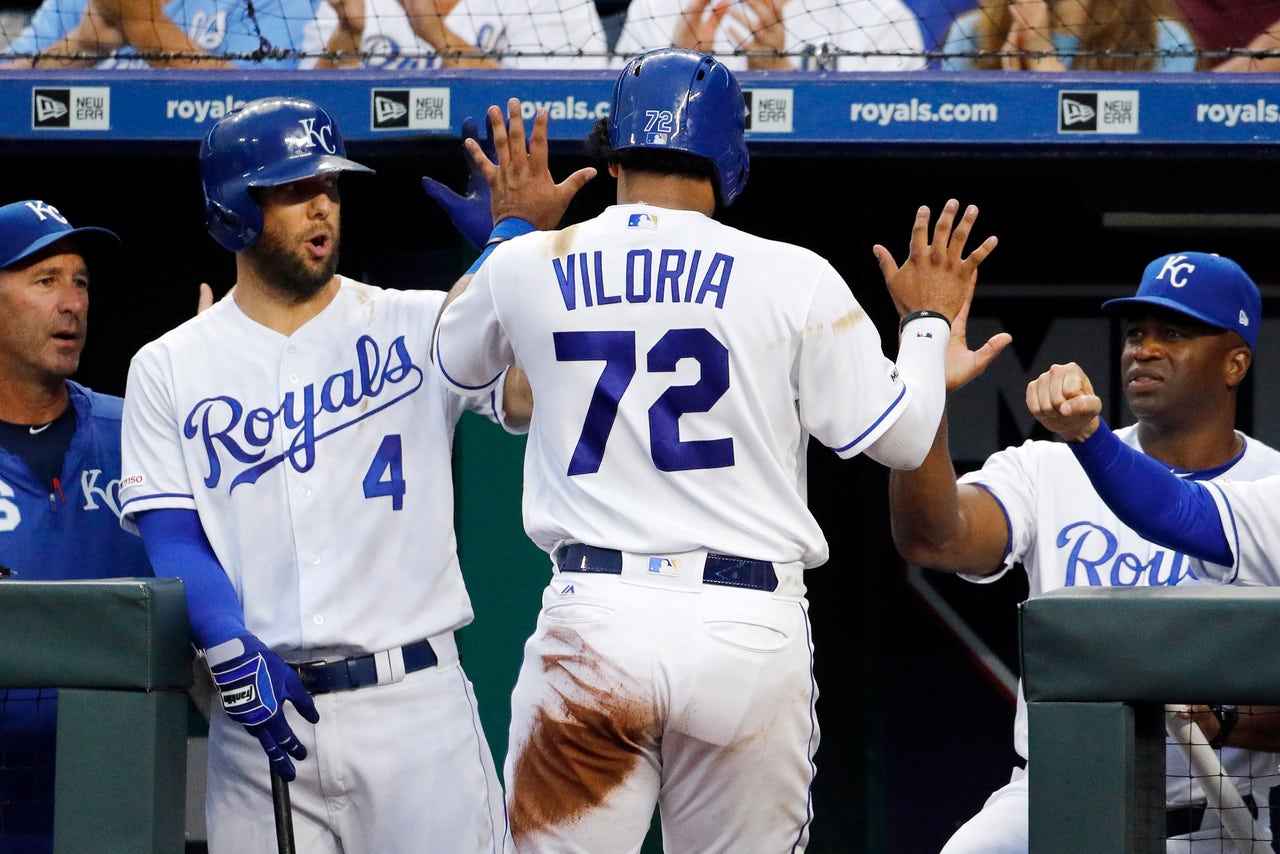 Whit Merrifield drove a tiebreaking sacrifice fly in the eighth inning after Kansas City loaded the bases on three bunts, and the Royals beat the Orioles 7-5 Saturday night.

Bubba Starling hit his first homer at Kauffman Stadium after growing up about 30 miles away, and Hunter Dozier connected for the 24th time this season for Kansas City.

Anthony Santander hit two homers for Baltimore. The 24-year-old is the youngest Orioles player since 23-year-old Eddie Murray in 1979 to homer from both sides of the plate in the same game, according to STATS.

Baltimore fell apart defensively in the eighth when Kansas City tried to play small ball. Slow-footed Meibrys Viloria started the Royals' rally with a bunt single. Phillips tried to sacrifice him to second, but Viloria beat the throw. Nicky Lopez followed with another sacrifice attempt, and catcher Chance Sisco's throw to third was off the mark.

"Very frustrating," said Sisco, who made both throws on the sac bunt attempts. "It (stinks). Obviously, I've got to make better plays."

Brett Phillips after the #Royals top the Orioles: "It was a great team win overall in front of a great crowd." #AlwaysRoyal pic.twitter.com/Cz0ktLlVk1

Merrifield's second sacrifice fly of the night made it 6-5, and Dozier added an RBI on a groundout.

The three bunts came against reliever Paul Fry (1-6), who took the loss even though those were his only batters faced.

Phillips made a diving catch and ran down a couple of other long drives in center. He also stole a base and made a nifty move on the bases to elude a tag at second during a three-run fourth inning.

"It was just a matter of letting my instincts take over. My football days came back to me, juking," he said. "I thought I had the rock in my hand for Saturday football. It felt good."

Scott Barlow (3-3) got the win with 1 2/3 perfect innings. Ian Kennedy pitched a perfect ninth for his 24th save in 27 chances.

Starling homered leading off the second, Santander countered with a leadoff shot in the fourth, and then Kansas City pieced together a three-run fourth on two sacrifice flies and a groundout RBI. That rally was helped when Phillips' routine fly to center was dropped by Stevie Wilkerson.

"Disappointed in our defense in the fourth," Baltimore manager Brandon Hyde said. "A couple of tough plays in the eighth didn't go our way. We've been playing well defensively. Tonight we didn't make the plays in the big spots."

Baltimore got four runs in the fifth inning to retake the lead. Sisco hit a two-out solo home run before Johnathan Villar and Trey Mancini singled to end the night for starter Jorge Lopez. Santander greeted reliever Tim Hill with his second home run of the night, the first multihomer game of his career.

Dozier's solo shot tied it in the seventh.

The Orioles had three players in the clubhouse and plan to activate them on Sunday when rosters can be expanded. None of the players will be making his MLB debut. OF Dwight Smith, Jr. has played in 84 games with the Orioles this season, hitting .238 with 12 homes runs and 48 RBIs. RHP Branden Kline is 1-4 with a 7.44 ERA in 25 relief appearances this season. Tanner Scott is 1-0 with a 5.29 ERA in 15 appearances with the parent club. The Orioles are considering other call-ups but have not announced them.

The Royals are expected to have some call-ups, but with most of their minor league teams preparing for postseason, no announcements were made, other than from the Injured List.

Orioles: RHP Aaron Brooks (4-7, 5.79 ERA) will try to duplicate his recent outing against the Royals when he allowed one run on seven hits over five innings.