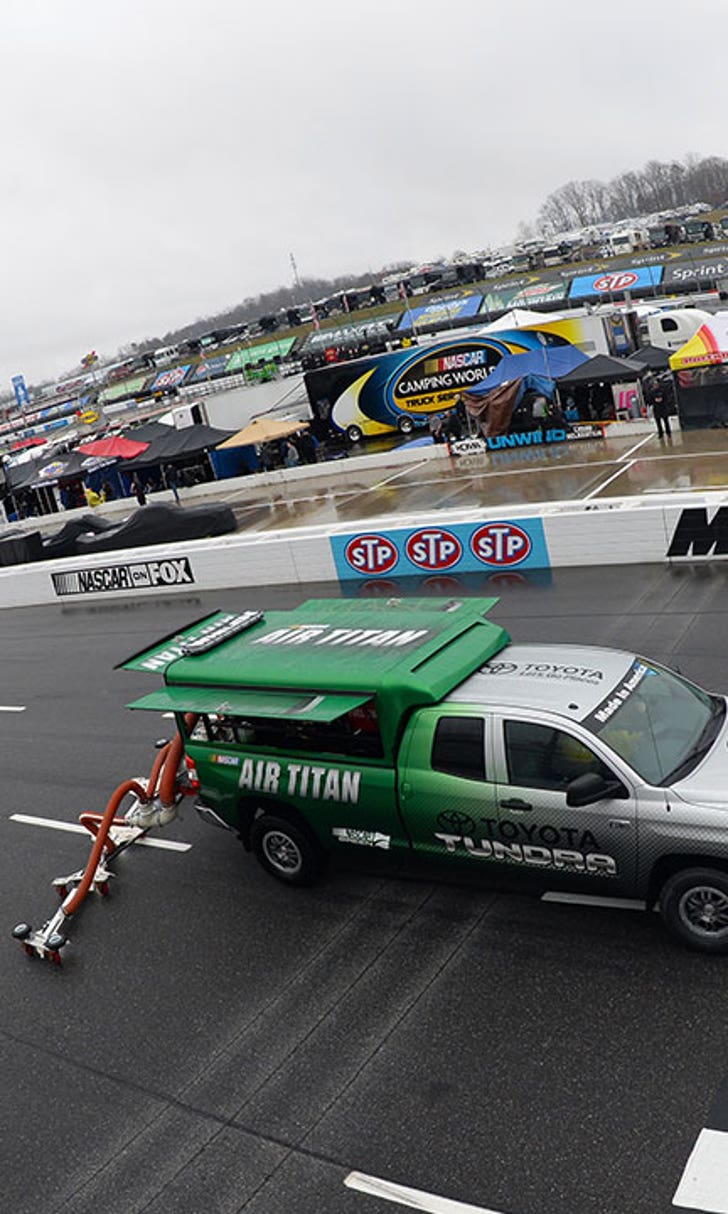 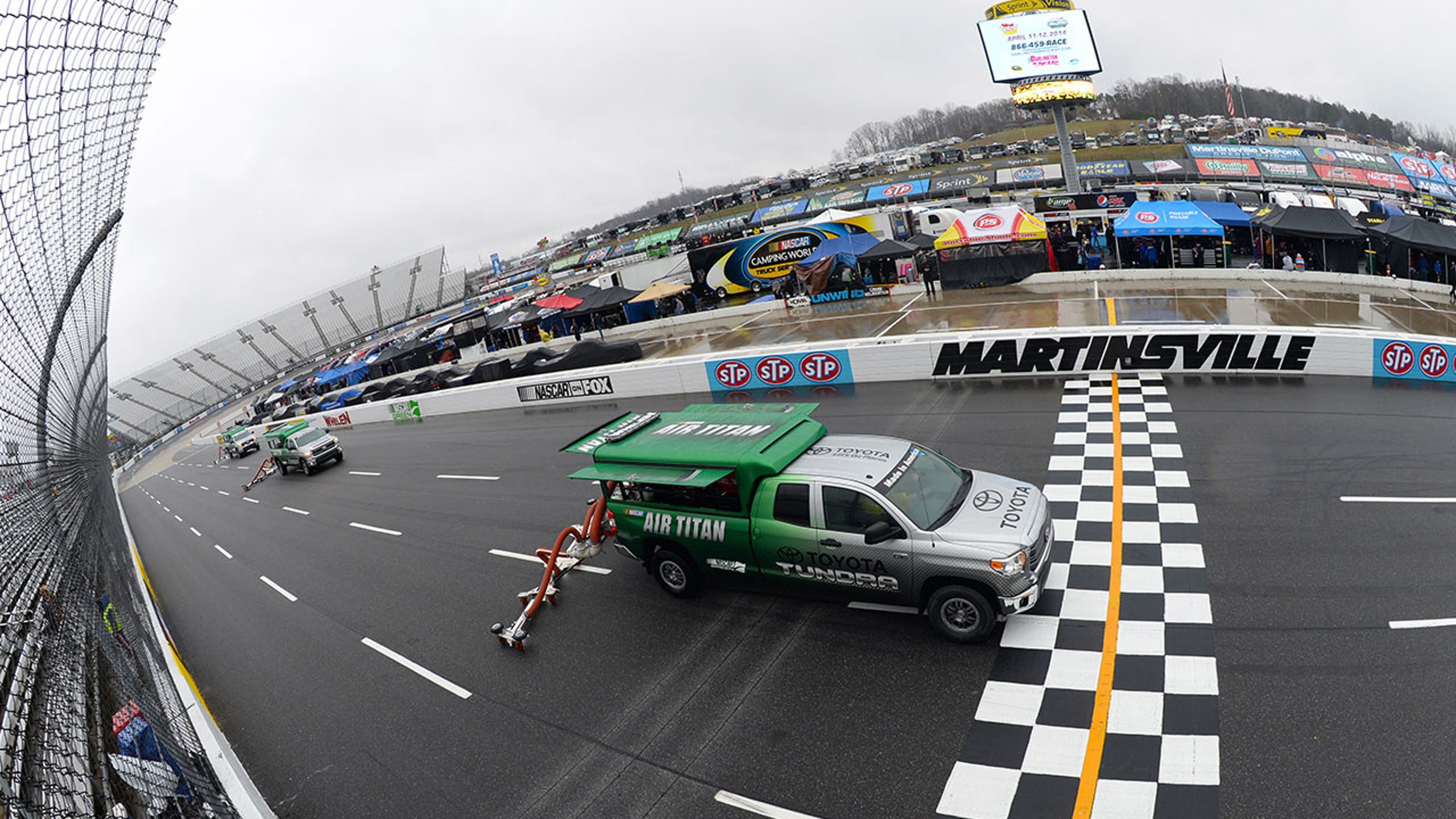 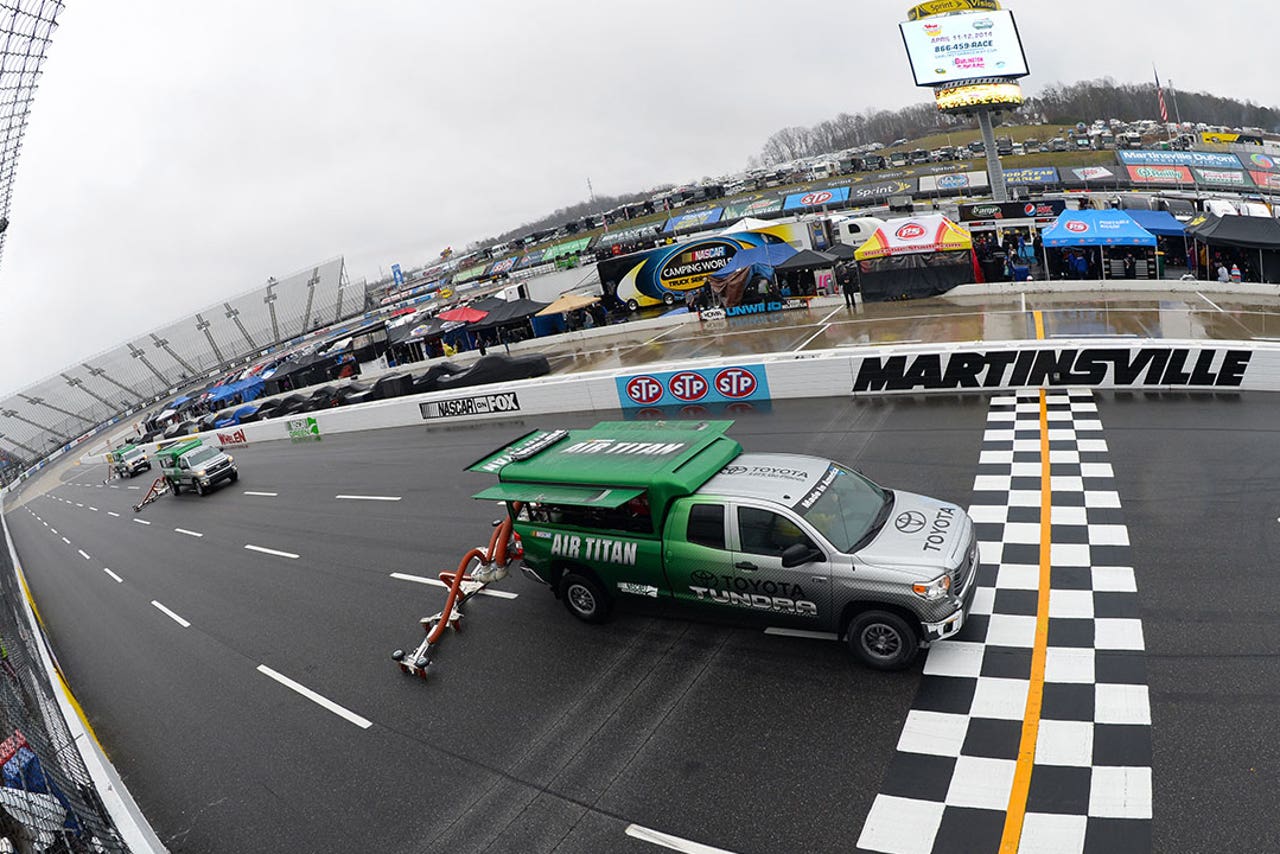 Editor's note: Scroll down for updates...

The opening race of the Eliminator Round of the Chase for the Sprint Cup is slated to kick off at Martinsville Speedway, but wet weather is hitting the short track Sunday morning.

Despite the rain, teams are still busy at work putting the final touches on their cars.

Arrived to rain falling and tents rising at @MartinsvilleSwy this morning. But, forecast to improve for #Goodys500 pic.twitter.com/BXwf8uxX0f

A little ☔️ falling at @MartinsvilleSwy as the track opens and work begins. #NW88JR pic.twitter.com/2zqcpkrepA

Tire prep for the No. 88 team today includes drying them under the tent. #NW88JR pic.twitter.com/7Kpgxk75RU

The pit crew checks over the @AutoOwnersIns Chevy before it heads to pre-race tech at @MartinsvilleSwy. pic.twitter.com/jNDhASE0hU

Rain jackets on everyone, including our Kobalt Chevy! pic.twitter.com/OKp2mVYz0a

Each driver in the field is battling to take home one of the most unique trophies in all of sports, the coveted grandfather clock.

Drivers are going through their typical pre-race routines, meeting with fans, sponsors and hospitality guests at the track.

.@aric_almirola starts his morning at The Ville with a visit from friends at @JaniKingClean pic.twitter.com/ETI2MKzAGH

Still a little rain passing through @MartinsvilleSwy area so @AJDinger is hanging with our guests inside the coach. pic.twitter.com/BJQA1K7ySQ

.@DaleJr visits with @Nationwide guests at @MartinsvilleSwy under some cover as the ☔️ picks up #NW88JR pic.twitter.com/3D7b2hvgzH

Modified legend Jerry Cook will be inducted into the NASCAR Hall of Fame in January 2016, but he spent the morning with Front Row Motorsports' David Gilliland. Gilliland's No. 38 Ford features a special paint scheme honoring Cook's career.

2016 @NASCARHall inductee Jerry Cook and @DavidGilliland talk about the special paint scheme for the #Goodys500 pic.twitter.com/Fi45IebQLH

"I want to thank @FrontRowNASCAR & @DavidGilliland for doing this." -Jerry Cook on No. 38 tribute car #Goodys500 pic.twitter.com/LE2uQrpVEc

While the wet weather continues to hit the track, the competitors filed in for the weekly driver-crew chief meeting.

Playing In The Dirt
NASCAR is preparing for its first races on the Bristol dirt track and the famed COTA road course. Bob Pockrass breaks it down.
2 days ago

A New, Potent Combo
William Byron and Rudy Fugle teamed up because of their chemistry. Sunday at Homestead proved that was the right move, Bob Pockrass writes.
5 days ago

Win $10,000 with NASCAR Super 6
Clint Bowyer’s money ($10,000 of it!) is on the line in Stage 2 at Homestead on Sunday.
February 25
those were the latest stories
Want to see more?
View All Stories
Fox Sports™ and © 2021 Fox Media LLC and Fox Sports Interactive Media, LLC. All rights reserved. Use of this website (including any and all parts and components) constitutes your acceptance of these Terms of Use and Updated Privacy Policy. Advertising Choices. Do Not Sell my Personal Info