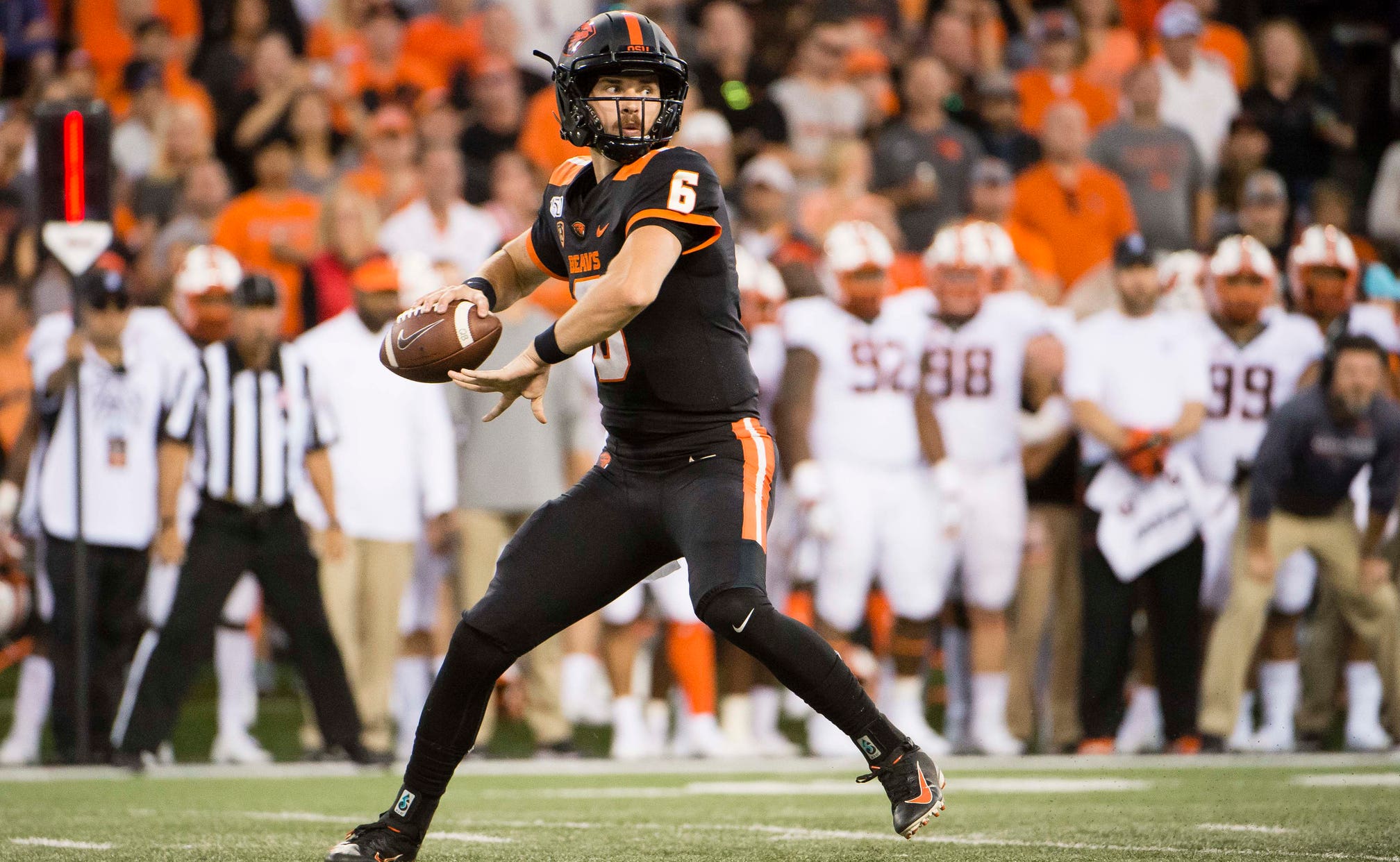 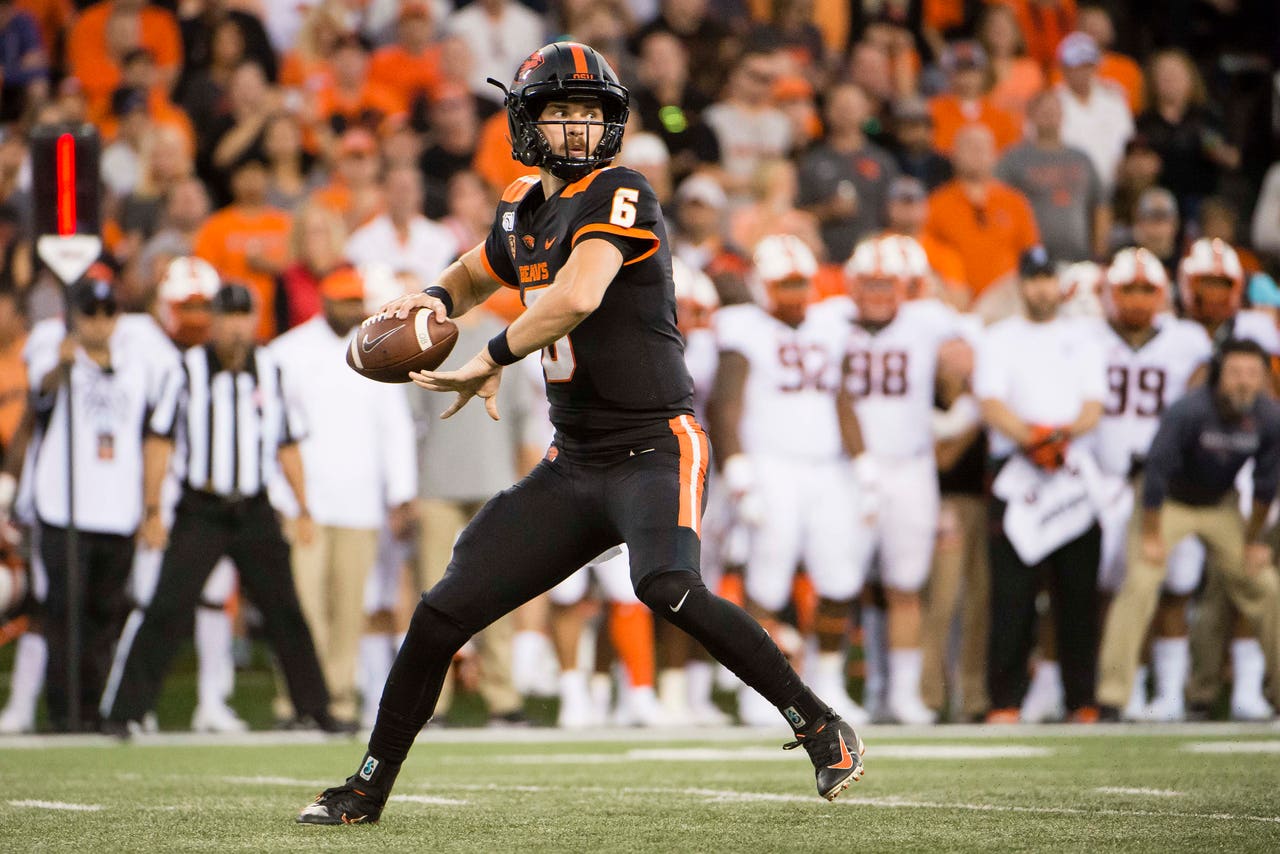 STILLWATER, Okla. (AP) — Spencer Sanders believed that it was his fault that Oklahoma State was unable to move the ball on its first two possessions Saturday night, and put it on himself to turn the Cowboys' potent offense around.

On the third play of Oklahoma State's third drive, he threw a 69-yard touchdown pass to Tylan Wallace, igniting a dominant passing game that piled up 413 yards and scored five touchdowns, to roll past McNeese, 56-14.

Sanders, a redshirt freshman, completed 12 of 18 passes for 250 yards and three touchdowns in his home debut until he exited the game early in the third quarter. Then backup Dru Brown, who narrowly lost the off-season battle to become the starter, stepped in and completed 7 of 10 passes for 142 yards and two touchdowns.

"I feel like we started off a little slow and I feel like that I need to get our guys going and make sure we're going from the snap, and just go from there," Sanders said. "But all in all, other than that, we did great as a team. We executed and we came together after those first two drives and we did well. I'm proud of us. I know we can do a lot better."

Wallace recorded five receptions for 180 yards and three touchdowns, including scores of 69 and 75 yards where he caught short passes, then outraced defenders the length of the field into the end zone.

After gaining 352 yards rushing in their season-opening 52-36 victory at Oregon State last week, including a nation-leading 221 from running back Chuba Hubbard, Oklahoma State (2-0) managed 167 in this one. Sanders topped them with 51 yards rushing on 11 carries, while Hubbard gained 44 yards and a touchdown on eight rushes.

For McNeese (1-1), Cody Orgeron threw an interception on the game's second play that was returned for a touchdown by OSU's A.J. Green, but bounced back to have a pretty good day. He was 11-of-22 passing for 151 yards and one touchdown, while also leading all players in rushing with 89 yards on 16 carries.

"He's a resilient kid, he's got moxy about him," McNeese coach Sterlin Gilbert said of Orgeron, the son of LSU head coach Ed Orgeron. "With every play and every snap, he's gaining experience and continuing to get better."

McNeese: Despite being overmatched in just about all facets of the game, McNeese, an FCS school based out of Lake Charles, La., played hard and had some impressive moments, just not enough of them. Orgeron's 52-yard run on the Cowboys' first drive of the third quarter helped set up his touchdown pass to D'Andre Hicks, who made an outstanding diving catch in the end zone. McNeese also turned the ball over on downs twice in the second half after reaching the OSU 1-yard-line. They also controlled field position well, especially in the first half, when Oklahoma State started five of their six possessions inside their own 15-yard-line. Four more times in the second half, OSU started inside its own 10.

Oklahoma State: The Cowboys looked dominant at times and not so much at others. Overall, though, Oklahoma State controlled the narrative, taking a 7-0 lead on the second play from scrimmage, when Green jumped in front of Orgeron's first pass attempt and returned it 27 yards for a touchdown. The superior speed of OSU receivers led directly to four different lengthy touchdowns, two by Wallace, and one each from C.J. Moore (59 yards) and Braydon Johnson (69 yards).

PLAY OF THE GAME

Besides his two lengthy TDs in which he evaded tacklers before racing to the end zone, Wallace also made a spectacular catch along the sideline late in the second quarter. McNeese defender Darrion Dunn was guarding him closely, and as the pass from Sanders came in, it bounced off Dunn's head. Wallace managed to corral the ball, securing it and keeping his feet barely in play before falling out of bounds. After a video review, the play was upheld as a 29-yard completion.

"That catch he had when I threw it up and gave them a jump-ball, that was amazing," Sanders said. "That catch today surprised me, just the focus on the ball and staying with it. You don't see that from a lot of guys. It's an honor to play with him."

McNeese: The Cowboys return home to take on Alcorn State next Saturday.

Oklahoma State: OSU's Cowboys travel across the state to take on Tulsa next Saturday.