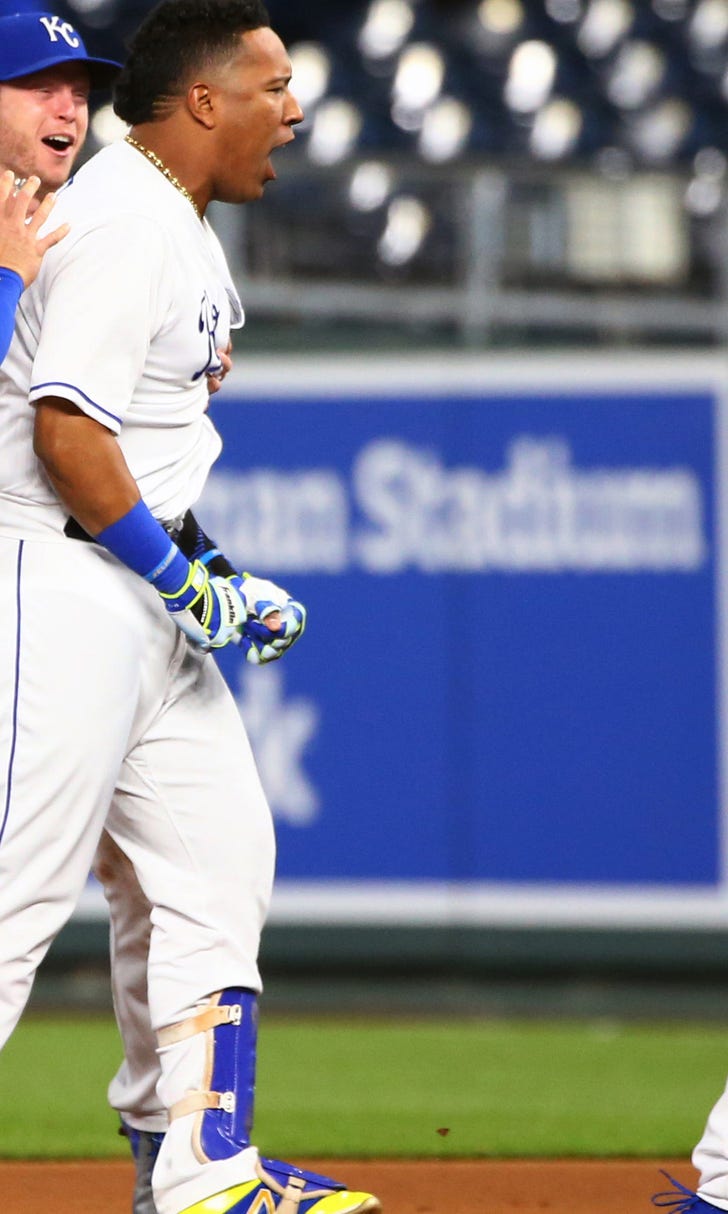 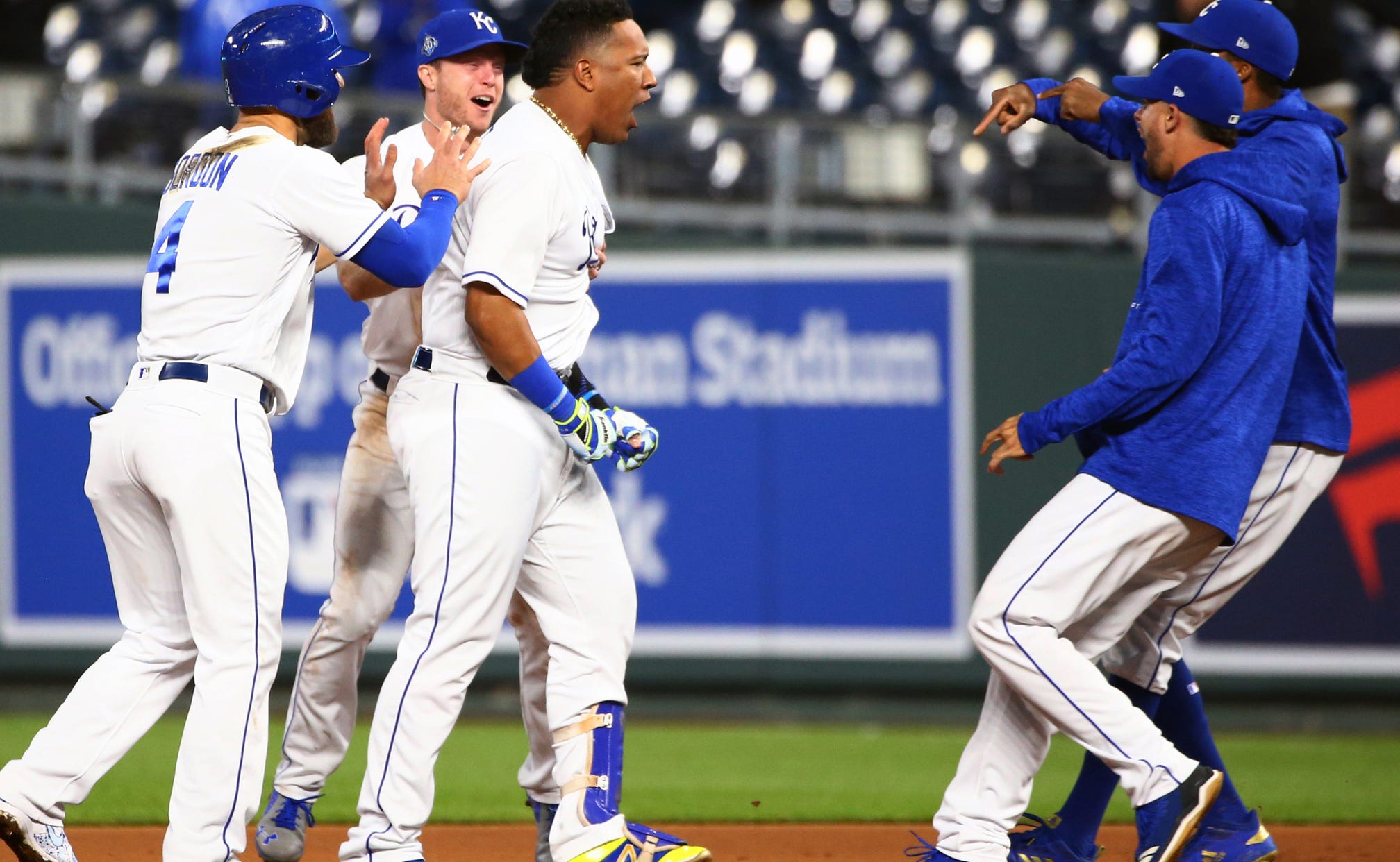 Salvy hits walk-off single, Mondesi has another big game in 2-1 win over Indians 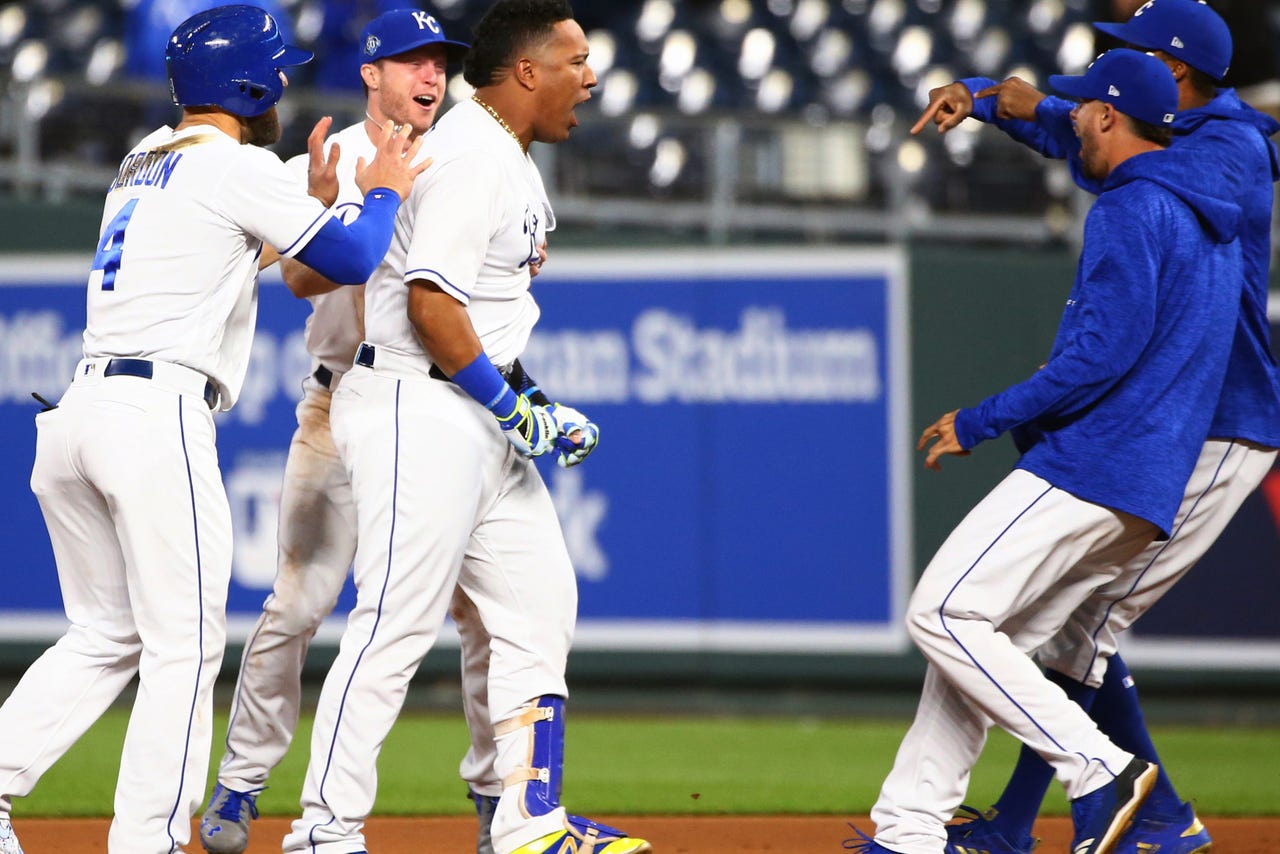 KANSAS CITY, Mo. — Salvador Perez got the big hit, although Adalberto Mondesi may have made the biggest plays.

Before Alex Gordon's walk and Perez's game-winning single in the 10th inning, the fourth walk-off RBI of his career and second in two weeks, it was Mondesi's two-out walk and two steals that set the stage for the Kansas City Royals' 2-1 victory over the Cleveland Indians on Thursday night.

"His aggressiveness was great, but also his patience was fantastic in that last at-bat," Royals manager Ned Yost said. "You kept thinking, 'OK, if you get on, the chances of us winning this game are going to be great, even with two outs,' because you know — boom — he's going to put himself in scoring position and we're just a hit away."

Neil Ramirez (0-3), who retired the first two hitters in the 10th, tried to get Mondesi to chase a full-count slider down and in.

Mondesi laid off the pitch, then reached 30 steals in 72 games played this season after swiping second and third.

A year ago, Mondesi probably hacks away and the teams may still be playing.

"It just shows you his growth and how far he's come, because last year that was an automatic swing 3-2 for a strikeout," Yost said. "He's made tremendous strides there."

Mondesi also hit his 13th home run for the Royals (57-102) — who are no longer in danger of matching the franchise record of 106 losses, set in 2005 — and made a game-saving defensive play in the eighth inning.

The Indians had runners at second and third with two outs when Yandy Diaz chopped a slow roller between third baseman Hunter Dozier and Mondesi, who made a quick scoop and an off-balance throw to get a diving Diaz.

"We practice on that every day," Mondesi said of throwing across his body, "so when it comes in the game, it's a lot easier for us."

Yost was more effusive about the play.

"That is a play in that situation that very few shortstops are going to make, because it does require such athleticism, such range and such arm strength to be able to complete that play," Yost said.

Jason Hammel (4-14) worked a scoreless 10th, one of five relievers the Royals used in five scoreless innings from the bullpen.

The AL Central champion Indians (89-70), who are locked into an AL Division Series matchup beginning next week with the reigning world champion Houston Astros, got their only run in the first.

Francisco Lindor led off with a single, took second on a botched pickoff attempt and went to third on a balk by Royals starter Glenn Sparkman. Lindor scored on Jose Ramirez's one-out sacrifice fly.

Josh Tomlin pitched well for the Indians in his final audition for a postseason roster spot. He went 4 2/3 innings, allowing only Mondesi's solo homer in the third with five strikeouts and no walks.

"I've finally gotten to the point where I know what my body's going to do," Tomlin said. "I'm not trying to force the issue. I'm just out there throwing, playing catch. It seems like I'm just playing catch."

Tomlin, who has a 6.14 ERA this season, remains a longshot for the ALDS roster, but manager Terry Francona was encouraged by what he saw.

"One cutter for the solo homer, kind of came across the plate, but other than that he spun the ball good," Francona said. "I thought his cutter was as crisp as we've seen. He got some kind of funky swings with it and stayed off the barrel."

The Royals' Whit Merrifield had two hits and moved into the major league lead with 188, one ahead of Atlanta's Freddie Freeman. Merrifield has 53 multi-hit games on the season.

Greg Allen has 21 steals after swiping second and third in the 10th inning. That gives the Indians four players — Jose Ramirez (34), Francisco Lindor (23), Rajai Davis (21) and Allen (21) — with at least 20 steals in a season for the first time since 1911, when the franchise was still called the Naps. "It's something that we believe in and can help us make a difference," Francona said. "That's sometimes something that gets overlooked, and we certainly don't want to."

Royals: The Royals are healthy except for four players on the long-term disabled list — 3B Cheslor Cuthbert (strained lower back), OF Jorge Soler (fractured toe), RHP Jesse Hahn (elbow surgery) and RHP Nate Karns (elbow inflammation). LHP Danny Duffy (shoulder inflammation) also has been shut down for the season.

Indians: INF Erik Gonzalez entered the concussion protocol after getting hit in the head by a pitch against the White Sox on Wednesday. Francona said Gonzalez experienced some nausea after getting beaned, but "is doing much, much better." Gonzalez traveled with the team but there is no timetable for his return. ... 1B Yonder Alonso got the day off. ... Francona said OF Michael Brantley, who left Tuesday's game after fouling a pitch off his right calf and then returned to the lineup Wednesday, sat for his regular day off and has no lingering effects.

Indians RHP Mike Clevinger (12-8, 3.07 ERA) will make his final start of the regular season opposite Royals RHP Ian Kennedy (3-8, 4.59) as Francona gets his rotation set for the playoffs.