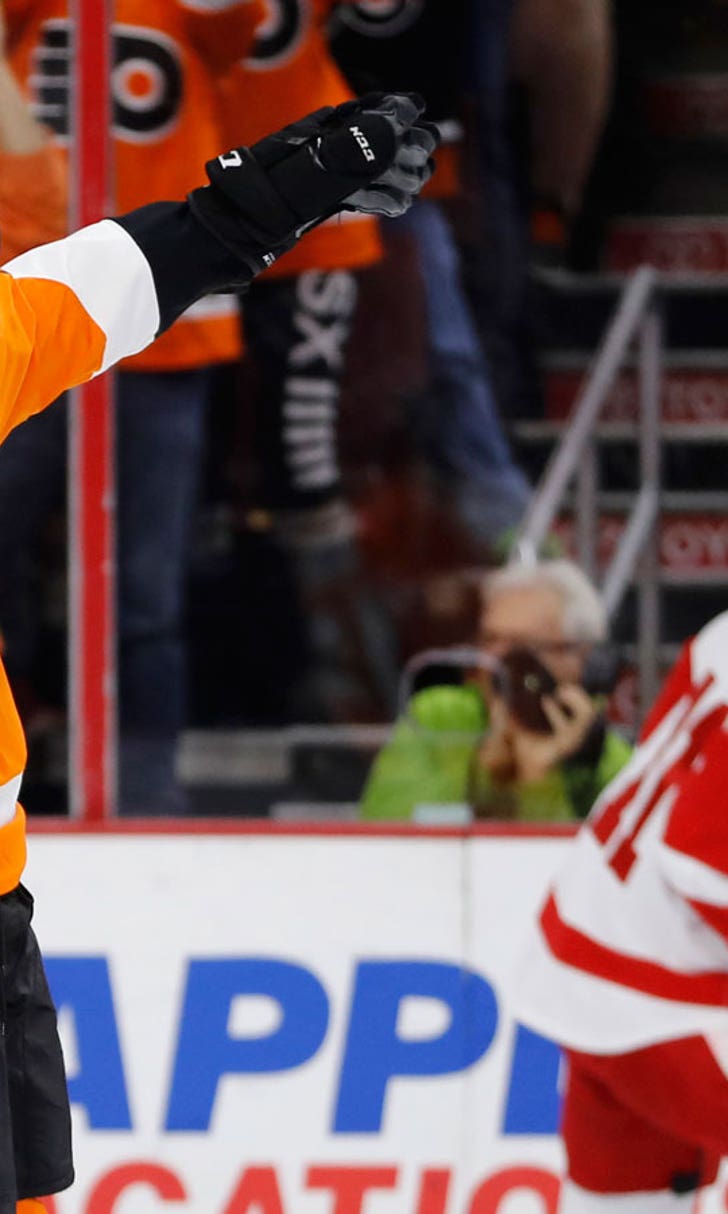 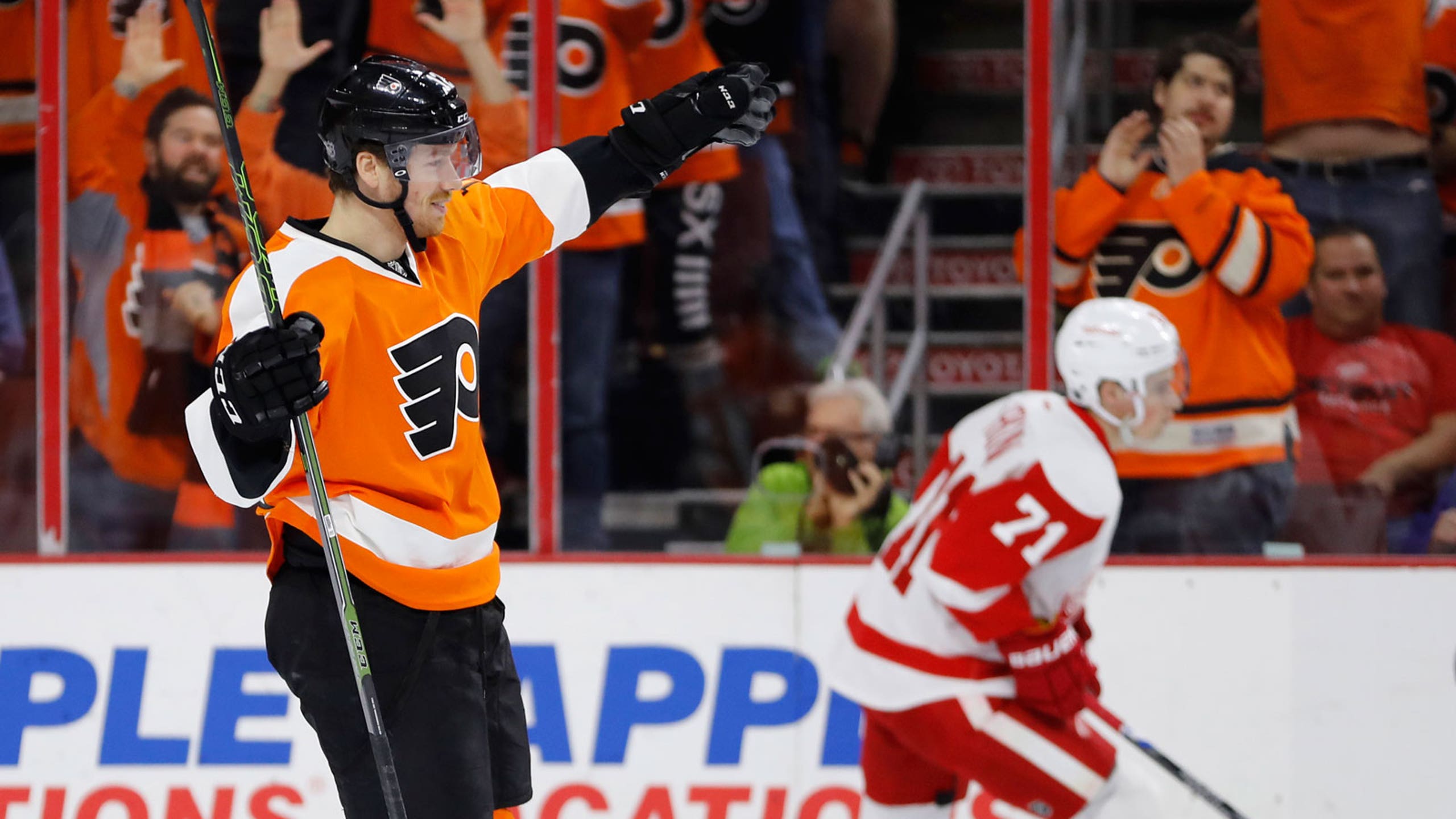 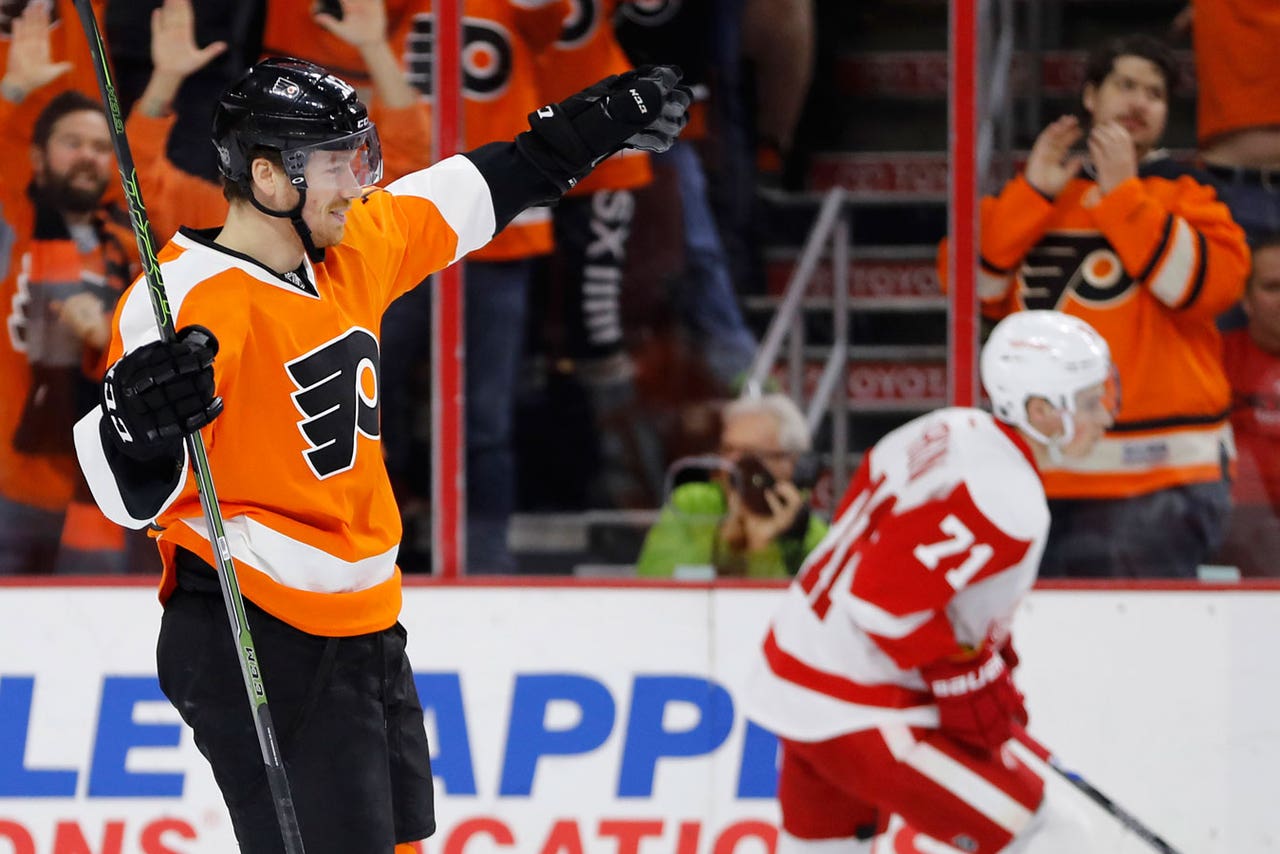 PHILADELPHIA (AP) -- The NHL playoffs open in a month. Treat every game as if it's the postseason, and Philadelphia just might get there.

The Flyers have 78 points and pulled within one point of the Red Wings for the final Eastern Conference wild-card playoff berth.

The Flyers dominated the Red Wings early and outshot Detroit 23-3 in the first period. They held on after Detroit's Tomas Tatar scored with 3:46 left in the game to make it 4-3.

"We knew it was kind of like a playoff game for us," Raffl said. "We were ready from the get-go."

Raffl and Wayne Simmonds both scored in the first to give the Flyers a lead they would never relinquish. With 14 games left this season, the Flyers need every point possible to reach the playoffs.

"We are fighting for our lives here," Simmonds said. "This was a pretty exciting game to get up for. It's pretty easy to get up for."

It's crunch time: Philadelphia also plays Pittsburgh three times and is at Detroit on April 6. The Flyers are only four points behind the Penguins.

Shayne Gostisbehere, one of the top rookie defensemen in the league, scored his 16th goal in just 50 games. His goal with 1:06 left in the second period made it 4-2 and was his first of the season that didn't tie a game or give the Flyers a lead.

Andreas Athanasiou scored his sixth goal of the season and Pavel Datsyuk scored his 14th for the Red Wings.

The Red Wings have lost five of seven and have a tenuous grasp on the final playoff spot. The Red Wings play their next three games on the road. They have made the playoffs 24 straight seasons.

"Once we got scored on, we got on our heels way too easy," Red Wings coach Jeff Blashill said. "We didn't show the resilience that you need to show after getting scored on."

Raffl opened the scoring with a nice goal that saw him surge past defenseman Kyle Quincy along the boards, then spin him in the circle, shaking the defender for his 11th goal of the season. Simmonds scored his 25th on a rebound off the faceoff and the arena rocked with a playoff atmosphere.

"It's a playoff-game sort of thing," Gostisbehere said. "I think the fans really helped us and the building was electric tonight."

The Flyers seemingly beat Detroit to every puck in the first, smacked around the Red Wings with big hits and controlled the forecheck.

Oh, and the shots? The Flyers said the 23 against Petr Mrazek were the most since they had 25 in the first period of a Jan. 29, 1984 game, against Chicago.

"We were playing the right way," Flyers captain Claude Giroux said. "We had four lines rolling, everybody was playing hard and we were pretty aggressive. That's how we got our chances. It was a fun period."

But the fun almost didn't last. Athanasiou and Datsyuk sandwiched goals around Raffl's second of the game in the second period to pull to 3-2.

Known as "Ghost," Gostisbehere again proved his worth as one of Philadelphia's top clutch goal scorers. His scored unassisted for the insurance goal.

"They did a good job of getting those goals back, but we had a couple guys stepping it up," Giroux said. "(Raffl) is playing a really good game right now and we need to keep him on the ice."

Barely tested with three shots in the first, Steve Mason made 20 of his 34 saves in the third. Mrazek finished with 42 saves.

"I thought our urgency off the drop of the puck was good, but when we get scored on we have to be way better at making sure we turn momentum around back the other way," Blashill said.

Notes: Philadelphia will host the CCM/USA Hockey All-American Prospects Game on Thursday, Sept. 22. ... Flyers F Jake Voracek remained sidelined with a foot injury and missed his eighth straight game. He did skate before the Flyers hit the ice for morning skate. ... Raffl had his second career two-goal game. His other one also came against Detroit on Oct. 25, 2014. Detroit's F Anthony Mantha, a 2013 first-round pick, made his NHL debut.