In the shadows of the No. 8 banner in the Honda Center rafters above, a Finn won a shootout with the help of a Swede.

It was all too fitting.

The fans were on the edge of the seats with all of their fingernails chewed off after Anaheim Ducks center Rickard Rakell scored in the waning minutes of Sunday night's game against the Winnipeg Jets, tying it up to put it into overtime. The game followed a 90-plus minute ceremony in which legendary former winger Teemu Selanne became the first player in franchise history to have his jersey retired.

The Ducks fell behind 3-1, then again 4-2. But Rakell scored his second goal and then he found the net again in the shootout to keep the Ducks alive. Finally, defenseman Sami Vatanen, a player that Selanne once took under his wing and even went so far as to loan a car to, scored in his first career shootout attempt. Two points for the Ducks and one huge emotional victory for all who helped honor a legend.

"I have to say I was honored to have the chance to do that thing," Vatanen said. "I can say to my grandsons someday that I had the game-winning goal in Teemu's night."

But Vatanen never would have been in that position had it not been for the play of Rakell, which was nothing short of impressive. Rakell scored twice and assisted on the other two goals for a four-point night, which tied a rookie record.

It's only the third time an Anaheim player has scored four points in a single game. Stanislav Chistov did it in 2002 and current captain Ryan Getzlaf did it in 2006. 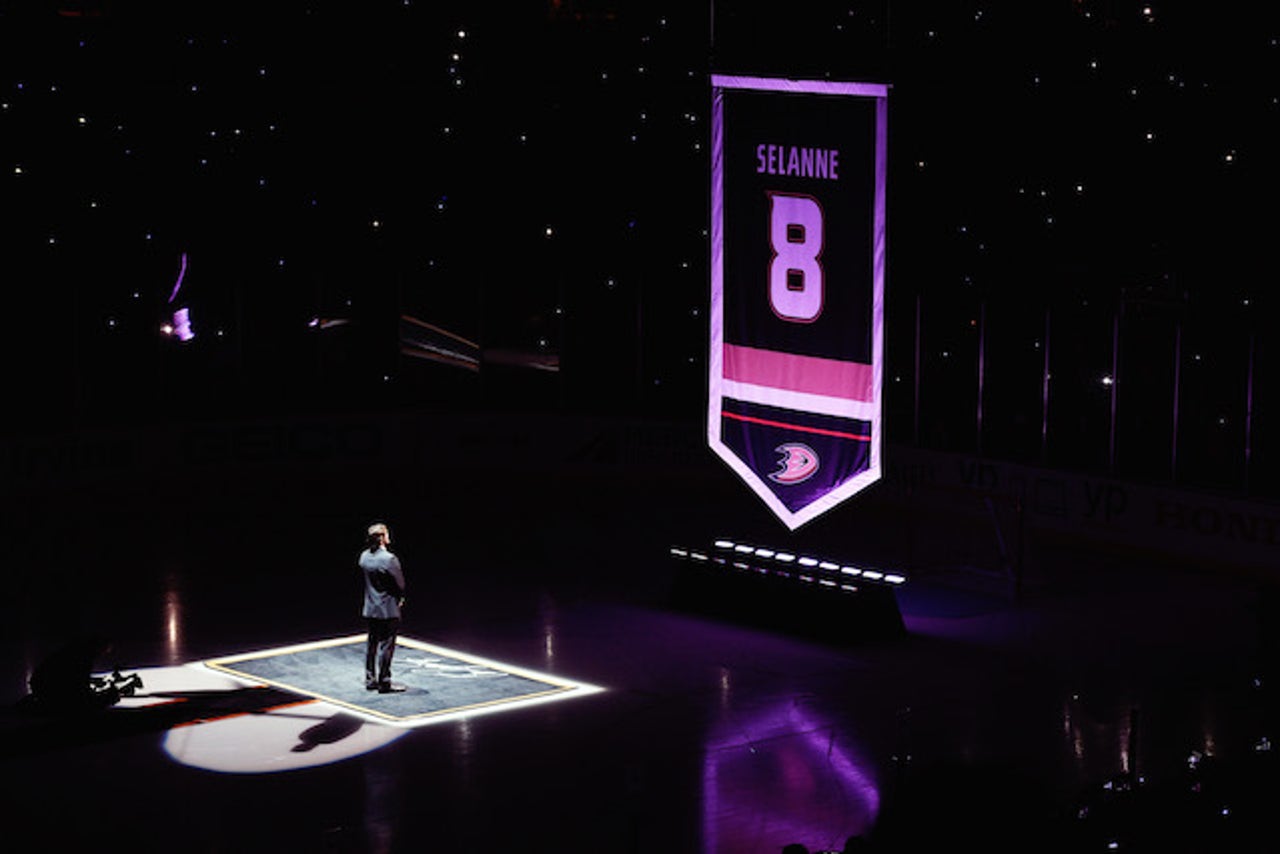 Selanne sums up jersey retirement ceremony in one word: 'Unbelievable'

"You could tell he was feeling it," said coach Bruce Boudreau. "I couldn't get him on the ice enough. Everything he was touching was turning to gold, you knew he had that feeling."

Rakell had scored only once this season in the 30 games at the NHL level he had played in prior to Sunday night. He was sent back to the AHL at one point this season as well, but his play in the 17 games he's been back has been enough to inspire confidence in him. Necessary adjustments were made and they're paying off.

"It's only one game, but I've hit so many posts," he said. "I've been pretty unlucky, so it feels great when everything you did went in the net."

After scoring his first career regular season goal right before the holidays, Rakell announced that "Christmas is saved". This time, it was Teemu night that he saved.

NOTE: @RickyRakell93 tied a franchise record for most points by a rookie in a single game (4), joining Stanislav Chistov & Ryan Getzlaf.

"We all thought it was a special night," Rakell said. "It was kind of like a playoff feeling in the first period with the fans going, and, obviously, retiring Teemu's jersey. We really wanted to win this game."

There was a point where it looked as though the celebration had become a distraction. The game got away from the Ducks in the second period. Heavy, and questionable, hits by Jets drew the ire of the guys with letters on their sweaters and retaliation become dangerous as the Ducks took several trips to the penalty box. The finished the second period with two in the box and began the third the same way.

But that was the turning point in the game, and Boudreau told the team during the intermission that if they could kill off the 5-on-3, they would catch up.

#NHLDucks Vatanen on his shootout-winning goal: "I was a little nervous because I haven't been good in shootouts. It felt incredible."

They killed it off, and you know the rest.

The hits, the fights, the comeback goals and the shootout win. The streak is now at 11-straight one-goal wins at home and the two points moved Anaheim back into a tie for the league lead with 60 points. It wasn't how they drew it up, but then again, it never is with this team.

"It's been fairly emotional," Boudreau said. "It was one of those games where we couldn't get anything going right off the bat. But if you believe you can come back and you can do the right things, you always have a chance."