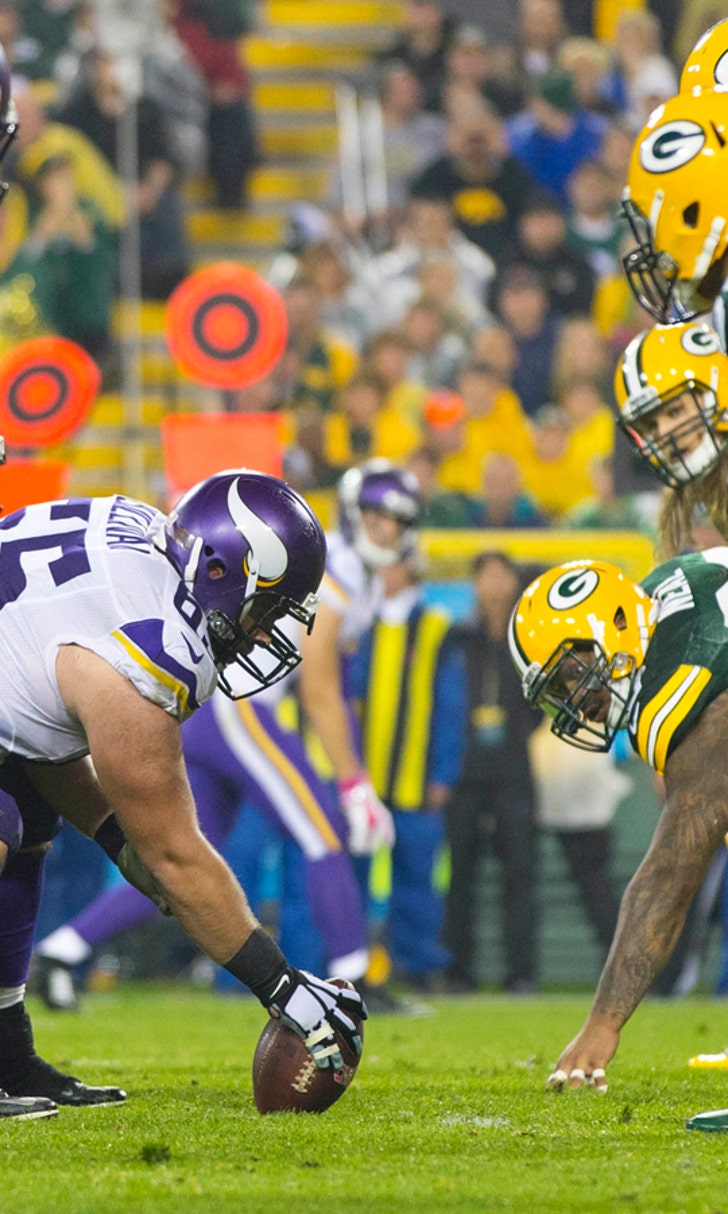 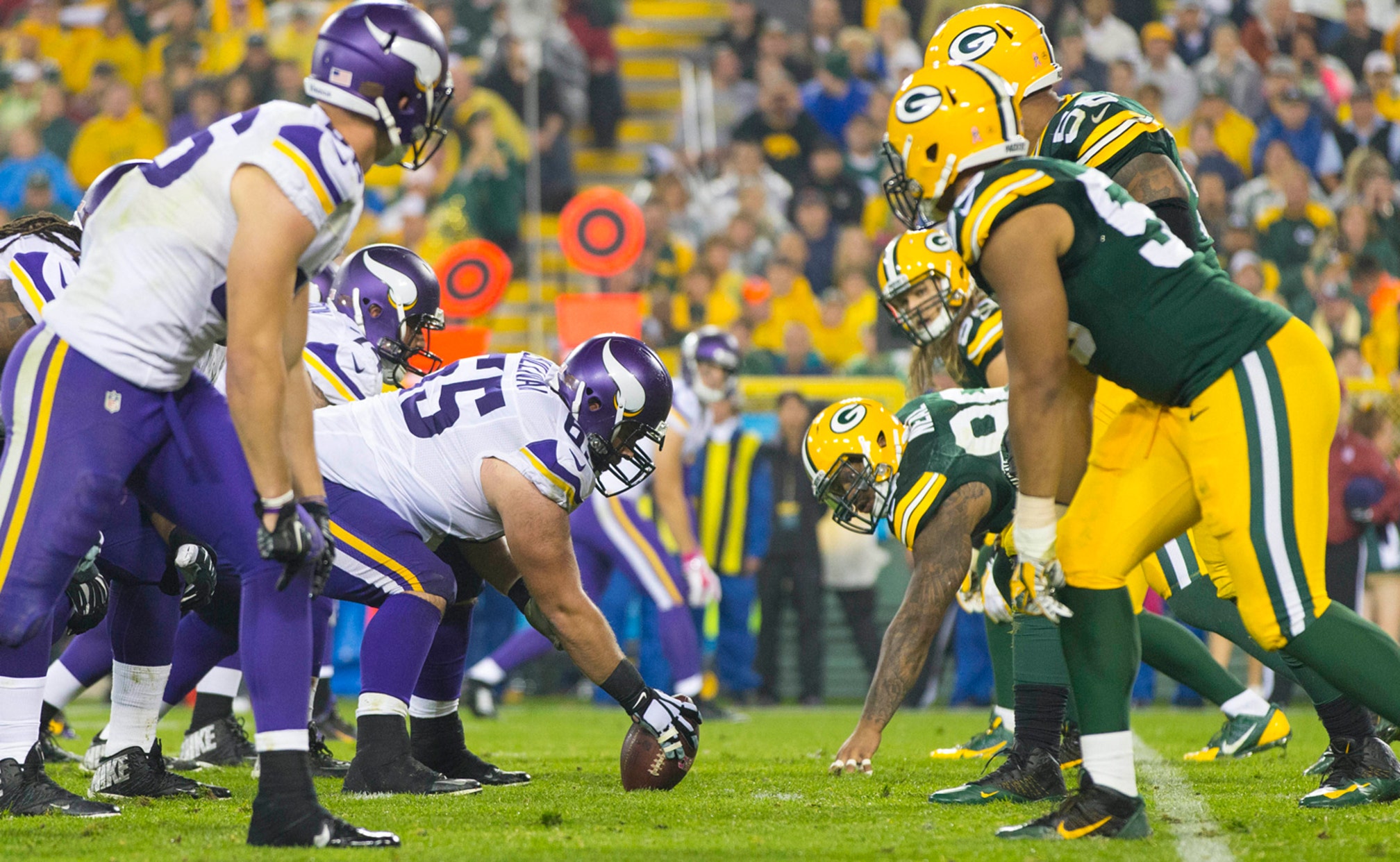 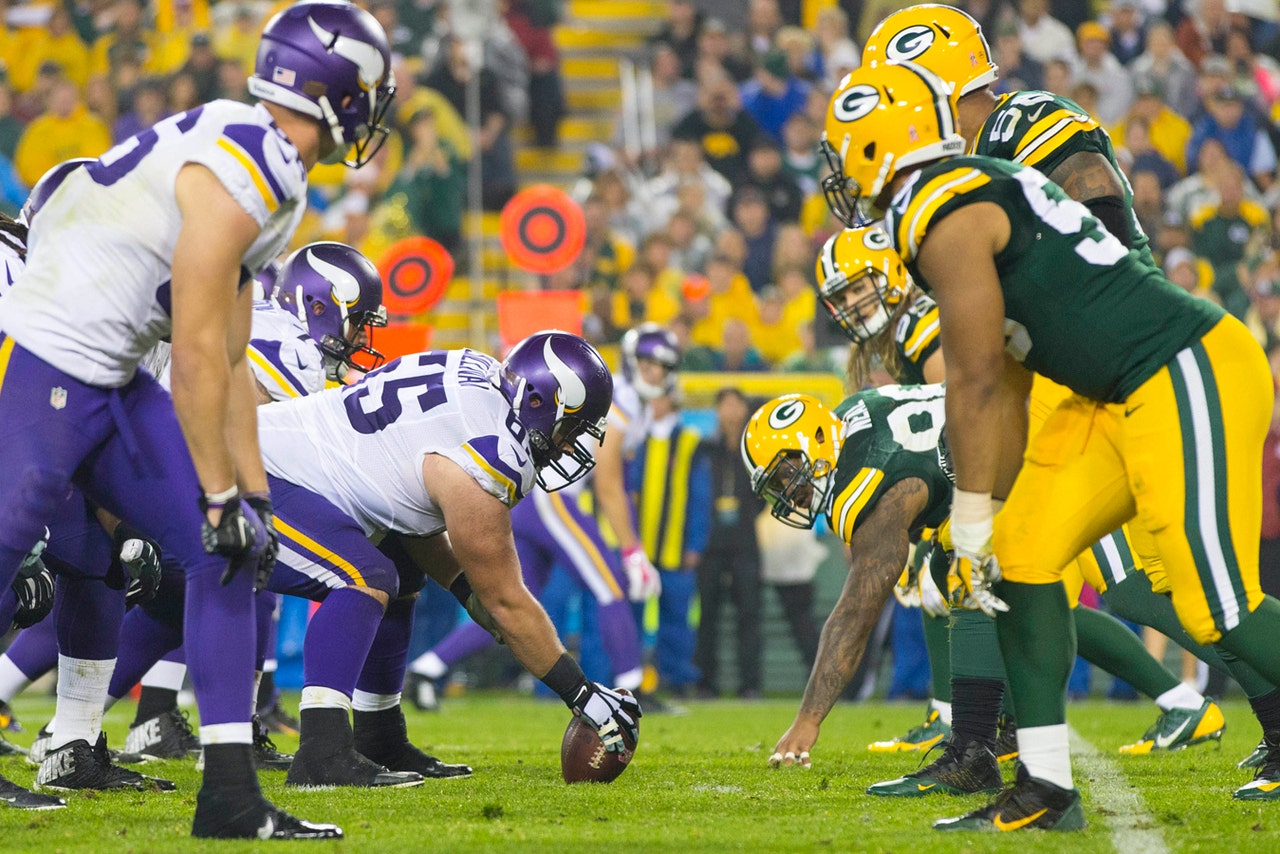 1. A focus is always on the trenches, which offensive line of the two teams are playing the best?

IMIG: The Packers, and it doesn't even seem close. Head coach Mike McCarthy said before the season began he thought this year's offensive line had the makings of what could be the best group in his time with Green Bay. After seeing them in action for 10 games, McCarthy said earlier this week that it's turning out to be true.

There might not be a better guard in the league than Josh Sitton. The duo of Sitton and T.J. Lang could give the Packers the best pair of guards in the NFL. They're both individually rated in the top 10 by ProFootballFocus (PFF) among guards. By comparison, the Vikings' guards are rated no better than the 53rd-best this season. Matt Kalil has been a disaster at left tackle for Minnesota. He's rated as the second-worst tackle in the entire league. The 11 sacks Kalil has allowed are three more than the next-worst pass-blocker among offensive tackles. In Green Bay, tackles Bryan Bulaga and David Bakhtiari have performed at an average-to-above-average level all season.

HALL: It would have seemed strange to say this at the beginning of the year, with Minnesota returning all five starters for their third year together and some highly regarded. However, Green Bay's offensive line is the unheralded group which might be a big reason the Packers' offense is humming along.

The Vikings offensive line has been a severe disappointment and one of the reasons rookie quarterback Teddy Bridgewater's transition has proven tougher.

Allowing 32 sacks is unacceptable for a unit that had been together for much of the past three seasons.

Left tackle Matt Kalil issues have been well-documented. He seems to really be struggling with confidence and the team revealed Friday he's still dealing with a bit of a knee injury. Left guard Charlie Johnson, perhaps in his last season with Minnesota, has underwhelmed. Right guard was a letdown after losing Brandon Fusco, but Joe Berger has provided some steadiness in starting the past three games.

Green Bay's guards are the veteran building blocks for the line, the two known quantities coming into the year. The biggest surprise and perhaps the reason the Packers' line has fallen into, well, line, is center Corey Linsley. The rookie Linsley is a fifth-round draft pick starting right away.

Quarterback Aaron Rodgers has a tendency to hold on to the ball waiting for the big play and Green Bay allowed 45 sacks last year, the ninth-most in the league. But the Packers have given up just 22 sacks through 10 games this season, ranking 16th. The lesser-known line is the one performing the best this year.

2. Which rookie (Anthony Barr, Ha Ha Clinton-Dix) is a better contender for the defensive rookie of the year?

IMIG: Anthony Barr. The ninth-overall pick has been a great addition for the Vikings' defense and has already earned the respect of Aaron Rodgers. "He's a big-time playmaker with a bright future, so he's one of those guys going forward where you're going to have to figure out where he's at on every play," Rodgers said of Barr this week.

Barr has four sacks, 11 quarterback hurries, a forced fumble, three passes defensed and 62 tackles. His 10.8 PFF rating is the fifth-best in the NFL among all outside linebackers playing in a 4-3 defense. Barr's biggest -- but perhaps only -- issue is missed tackles, where his 19 are more than twice as many as the next-worst Minnesota player. The most missed tackles by any Packers player is 8, which just happens to be Ha Ha Clinton-Dix.

Clinton-Dix has been a great addition to Green Bay's defense. He's made the Packers' safety struggles from a year ago quickly disappear. But with one sack, one interception, 55 tackles and a minus-2.1 PFF rating, Clinton-Dix hasn't contributed to the extent that Barr has.

HALL: With respect to what Ha Ha Clinton-Dix is doing for Green Bay, Anthony Barr might be the leading contender in the entire NFL for defensive rookie of the year. Of course, Barr was drafted No. 9 overall and has been a full-time player since the first snap of the year. Clinton-Dix was selected 21st overall and had to earn a bigger role.

Clinton-Dix has started the past four games and is making an impact. He was the perfect fit in the first round of the draft for what the Packers needed. He supplies range and tackling at safety and is sixth among all rookies with 55 tackles. He's added one interception and one fumble recovery.

Barr, somewhat of an unknown when he was drafted, has added the splash plays. He's fourth among rookies with 62 tackles. Barr's big-play ability has allowed him to standout. He's tied with Rams defensive tackle Aaron Donald for the lead among rookies with four sacks. Barr has forced one fumble and leads all rookies with three recoveries, including his strip, recovery and return for a touchdown to beat Tampa Bay in overtime.

Barr's become one of the most indispensable players for the Vikings' resurgent defense.

3. Green Bay is 2-3 away from home while the Vikings are 2-2 in Minnesota. How much advantage will the home field be?

IMIG: Very little. Not that there was a choice involved, but the Vikings should have preferred to play this game in their old Metrodome. Most Packers players hated being there. Plus, Green Bay has really struggled in domes this season. The only aspect working in Minnesota's advantage is that the Packers have never played at TCF Bank Stadium. As Rodgers said this week, he'll have to go on the field well before kickoff, test it out and find the play clock. But none of that is too big of a deal. Green Bay is used to cold-weather games outside and have looked unstoppable playing in those type of conditions recently at Lambeau Field. Packers fans travel very well, too, especially when the drive to Minnesota isn't that far from Green Bay.

If there's any home-field advantage for the Vikings at all in this game, it's minor.

HALL: Frankly, not much, if at all. The Vikings will have their fans behind them but a weather advantage might go to the Packers. Green Bay is used to playing in the elements and Rodgers has had some big games playing in the cold. The aspect which should be affected most is the passing game, and Rodgers hasn't seemed bothered by cold in the past.

Bridgewater, meanwhile, has very limited experience in cold -- forecasts for Sunday call for a high of 43 and a rain/sleet mix. Bridgewater played in one college game with temperatures in the 20s and had moderate success. Last week in Chicago in cold and light snow, Bridgewater didn't even try to get the ball downfield and relied on short passes and checkdowns.

The Vikings will get used to playing outside in the cold, but it hasn't happened yet. Barr, who played at UCLA, also seemed a step slower in the snow and cold last week and Minnesota missed several tackles. Sunday should be the first true cold weather game of the Vikings' two-year stay at TCF Bank Stadium. The Packers are well used to playing in poor conditions.

4. What unsung player needs to have a good game for the team you cover?

IMIG: If the Packers key players perform well, they'll win. That's why every team in the league is looking for a quarterback like Rodgers, because it negates the need for an "unsung player" to play at a higher-than-normal level to pick up wins.

However, Green Bay will be much better off if Richard Rodgers has a good game. When the rookie tight end is on the field, 56 percent of the time it's been to block. Minnesota's pass rush has been great this season, ranking fourth in the NFL in sacks. The Packers might need their tight ends to give extra protection in order to prevent the Vikings from getting to the quarterback. Minnesota also has several good run-stoppers, and that's an area where Richard Rodgers has struggled. He'll be tested in this game with his blocking ability, and his performance will be a factor in the running lanes that Eddie Lacy gets and in the time that Aaron Rodgers has to throw.

HALL: In kind of keeping with the next point, I'll say Minnesota needs a big game from rookie running back Jerick McKinnon. One way for the Vikings to beat Green Bay would be keeping Rodgers and the explosive Packers' offense on the sideline. McKinnon has displayed some big-play ability and some tough running that belies his 5-foot-9 frame.

Backup Matt Asiata won't play with a concussion and Ben Tate is too new to expect much of an impact. McKinnon will have to carry the load for the Minnesota. Green Bay's defense has been susceptible to the run -- 29th in the league in run defense -- if the Vikings can keep the game close. The Packers moved Clay Matthews to inside linebacker on some downs to help the run defense. Matthews is quick and active and has made a difference.

McKinnon can help take the pressure off Bridgewater and Minnesota's defense if he can control the game on the ground and help the Vikings control time of possession.

5. Minnesota is around a 9 1/2-point underdog. What needs to happen for the Vikings to win?

IMIG: Win the turnover battle by two or more. But that won't be easy for Minnesota to do. The Packers have the best turnover differential in the NFL at plus-14. They've only given the ball away eight times compared to 22 takeaways. Rodgers is, of course, well-known for not throwing interceptions, so the Vikings are unlikely to add their 11th pick of the season. If the Vikings are able to get pressure on Rodgers, though, that could possibly force an errant pass.

Minnesota is plus-one this season with 14 takeaways to 13 giveaways. That's not bad, especially for a team with a losing record. The Vikings will need Teddy Bridgewater to play error-free football, and he's done a good job of that with throwing only one interception in the past three games. If Bridgewater avoids an interception and the Vikings can force a couple turnovers, they'll have a shot.

HALL: Much in line with point No. 4, I'll say keeping Rodgers, receivers Jordy Nelson and Randall Cobb and running back Eddie Lacy on the sideline -- and out of the end zone. Green Bay doesn't need much time with the ball to control the game. The quick strike offense -- seen by Minnesota in the first game -- can do the trick without a big advantage in time of possession.

The Packers' offense is just making things look so easy right now, scoring more than 50 points in consecutive games. Green Bay has scored 108 points in the past two games. The Vikings have scored 181 points all season.

The Vikings forced five three-and-outs in the first half by the Packers' offense in the first meeting between the teams, but Minnesota trailed 28-0.

Controlling the game with McKinnon and trying to play keep away -- and keep Green Bay out of the end zone, within reason -- is how the Vikings must face Sunday's game. Minnesota can't even rely on turnovers likely, The Packers are tied for the league's fewest turnovers with eight.