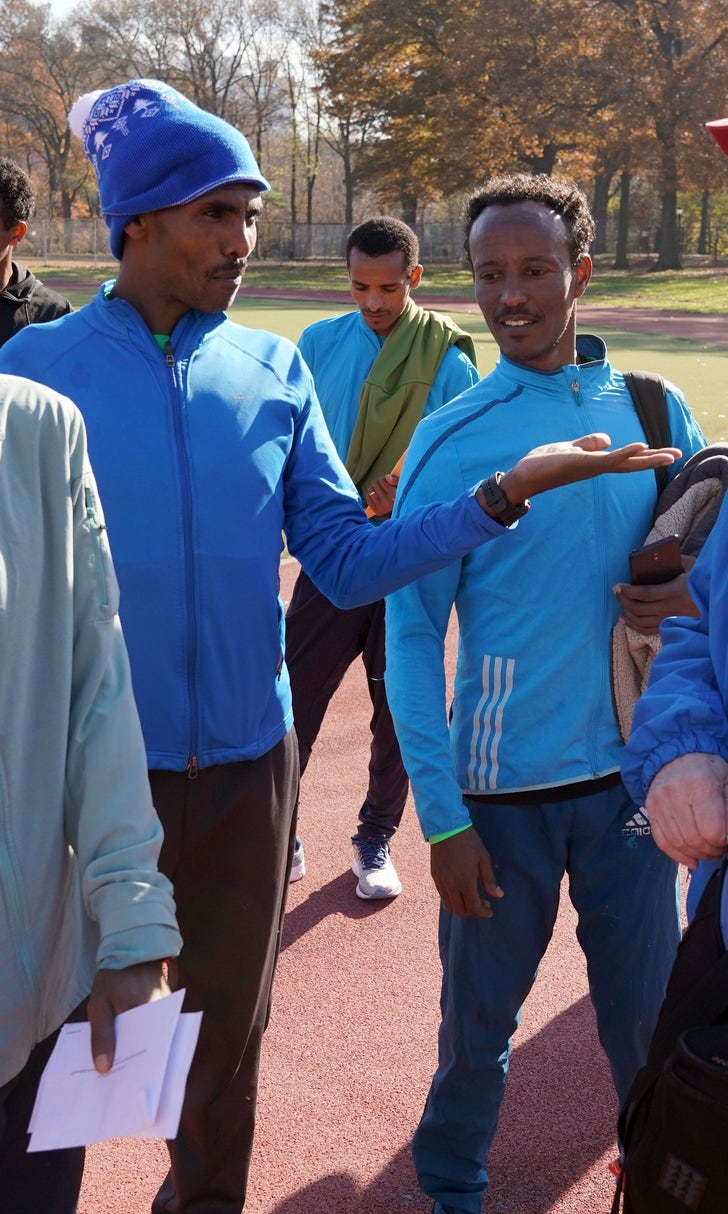 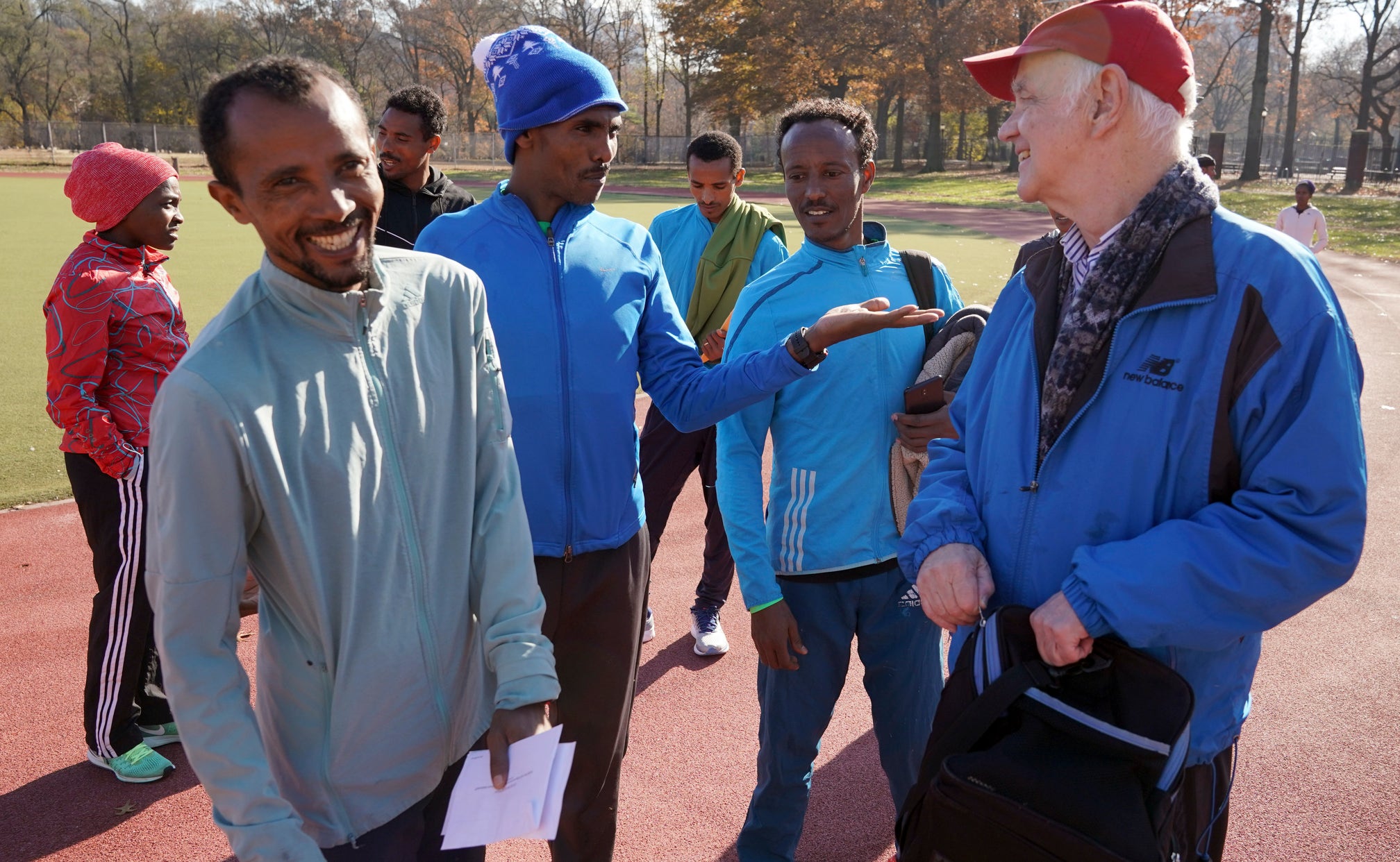 NEW YORK (AP) — A no-name entrant at this month’s New York City Marathon — literally, he didn’t even qualify to have his name printed on his bib — Girma Bekele Gebre crashed the elite field and finished third in the largest 26.2-mile race in the world.

A week later, the Ethiopian runner sat in Bill Staab’s Upper West Side apartment, smiling and nodding while Staab recounted details from his stunning podium finish.

Staab, the 80-year-old president of the West Side Runners’ Club, has helped numerous careers during his 42-year term, making the American dream possible for immigrants from all over. A longtime running enthusiast who is retired from his career in steel sales and administration, Staab has become an indispensable organizer for runners from South America and Africa. He’s written hundreds of letters to support visa-seeking athletes, and he says he’s spent nearly $1 million of his own money on entry fees and memberships for West Side runners like Girma.

He doesn’t pocket the winnings — like the $61,000 earned by Girma, or the $10,000 that countryman Diriba Degefa Yigezu got for winning last weekend’s Philadelphia Marathon. Staab helps the athletes cash those checks and use the money to fund their travels or support others back home.

“When I came here, I didn’t have any family,” Diriba said. “This person helped me. That’s why I run for him.”

Girma’s success is a new level for West Side Runners. Prior to his breakthrough, he was “just another one of our runners,” Staab said — one of his “basically minor league racers.” Girma came to the U.S for three to four months at a time, and Staab would arrange near-weekly races for him across the country. He’d make $500 here, $1,000 there — his biggest payday was $8,000 — and he would send some of that back to his family, which is helping raise his 4-year-old daughter on their farm.

The routine was interrupted this year when one of Girma’s six brothers died. He cut short his spring U.S. trip and returned to Ethiopia. Instead of grinding through half-marathons and 10Ks, he trained at altitude in the Ethiopian capital of Addis Ababa.

New York was Girma’s first race back in the U.S., and he posted a stunning time of 2 hours, 8 minutes, 38 seconds — more than five minutes faster than his previous personal best.

Girma is thinking about putting the prize money into a house in Ethiopia. He’s been contacted by agents and sponsors about potential deals, and Staab is hopeful Girma will be approved for a green card — an important step up from his P1 athlete visa that will make living and competing in the U.S. easier. He’s eyeing the Boston Marathon for his next race, although it’s uncertain if he’ll crack the smaller field there. For now, he plans to spend time back home weighing his options. Among his goals: he wants to shave another few minutes off his personal best marathon time.

Staab hardly envisioned a success story like that when he took over West Side Runners. Originally a small club of local athletes from the West Side YMCA, the team first went international in 1980 when Staab helped three Colombian runners enter the NYC Marathon. Word spread that Staab could connect international runners to U.S. races, and athletes from Ecuador, Brazil, Mexico and other Latin American countries followed. West Side Runners became a powerhouse at local competitions — and a strikingly diverse one racing against mostly white teams stocked with post-collegiate runners.

“The other teams laughed at us,” Staab said. “And then we began to beat them. Then they didn’t laugh quite so much.”

Staab, a former Peace Corps volunteer, turned managing West Side Runners into a full-time endeavor after retiring a decade ago. His commitment and capability struck some Ethiopian runners seeking a new team around that time, and now Ethiopians make up roughly a third of the club’s roughly 350 members. Some come to the U.S. for a few months at a time, and some longer. Staab used to let runners stay in his apartment, but his co-op board recently outlawed that. Many runners have friends to stay with elsewhere in the city, and some share small apartments in the Bronx.

They’re almost all full-time runners, with athlete visas that preclude them from taking on other jobs. Although they aren’t world-renowned, they can earn enough to cover expenses and send money home, mostly because Staab can get them into nearly any mid-tier race in the country.

It’s not a luxurious lifestyle. Diriba will end up running about 20 races this season — he might have completed more if not for an injury over the summer — and estimates he’ll make about $26,000. Barely enough to make rent in his shared Bronx apartment, but in Ethiopia, he says, “it’s a lot of money.”

Staab also uses the club to help runners get visas, estimating he writes about 100 letters per year to immigration vouching for potential racers.

One of those runners is Nuhamin Bogale Ashame. Formerly a junior world champion at 1,500 meters, Nuhamin fell off the international competitive scene due to injury but is trying to make her way back at longer distances. With Staab’s help, she’s raced everything from one mile to half-marathons in her first year in the U.S. The 26-year-old heard good things from other athletes about West Side Runners while she was in Ethiopia, and she hasn’t been disappointed by Staab.

“For Ethiopian runners, he’s like a father,” she said. “We love him.”

That much became clear to Staab last year, when 15 Ethiopian runners accompanied him to the hospital when he had to have a tumor removed from his bladder. Staab doesn’t have any family in New York, so his runners remained with him overnight.

“When I went back for another operation, the nurses didn’t remember me, but they remembered the Ethiopians,” he said.

Staab bemoans that the immigration process has become more difficult since Donald Trump’s election. He’s stopped trying to get visas for Mexican runners “because you’re not going to get them.” Even for the Ethiopians, Staab has had a harder time since Girma got his P1 visa in 2013.

“They’re from a shithole country, you know?” he said, wryly referencing Trump’s reported comments from last year about some African nations.

Still, most of Staab’s team members are immigrants. Their success is on display at his apartment, where dozens of trophies sit on a table in the entry. Runners often leave those prizes for him — they’d rather save room in their luggage for clothes, shoes and souvenirs, anyway.