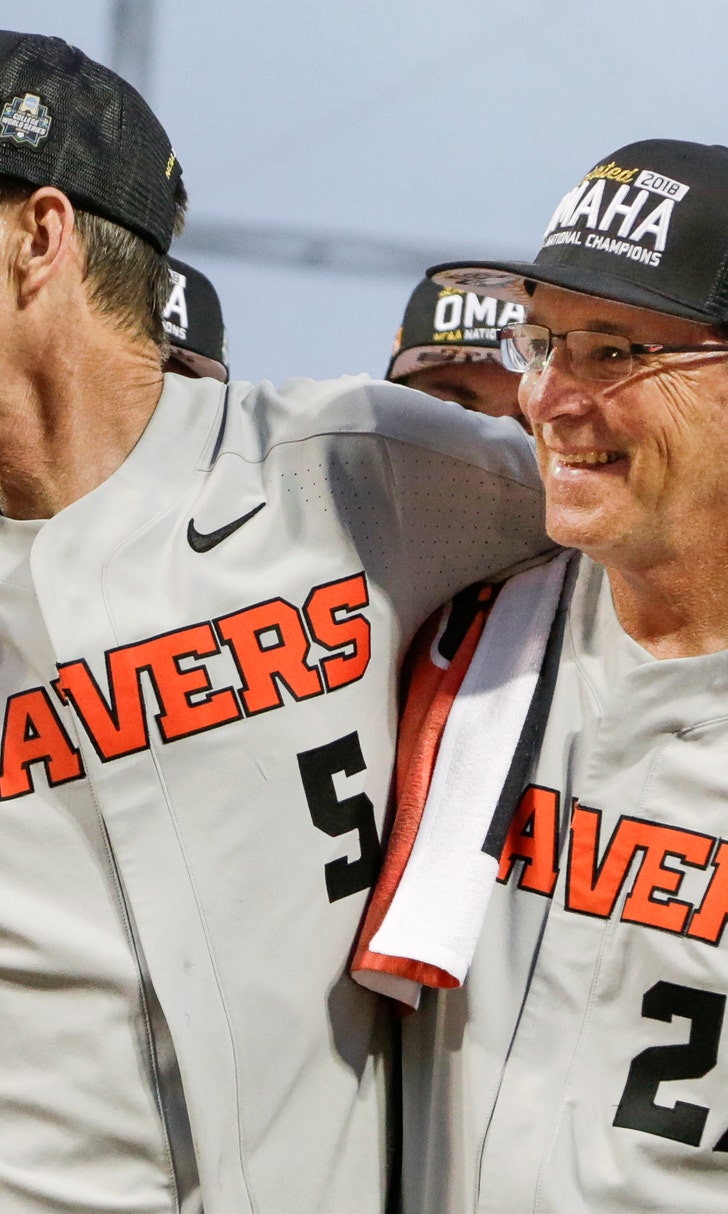 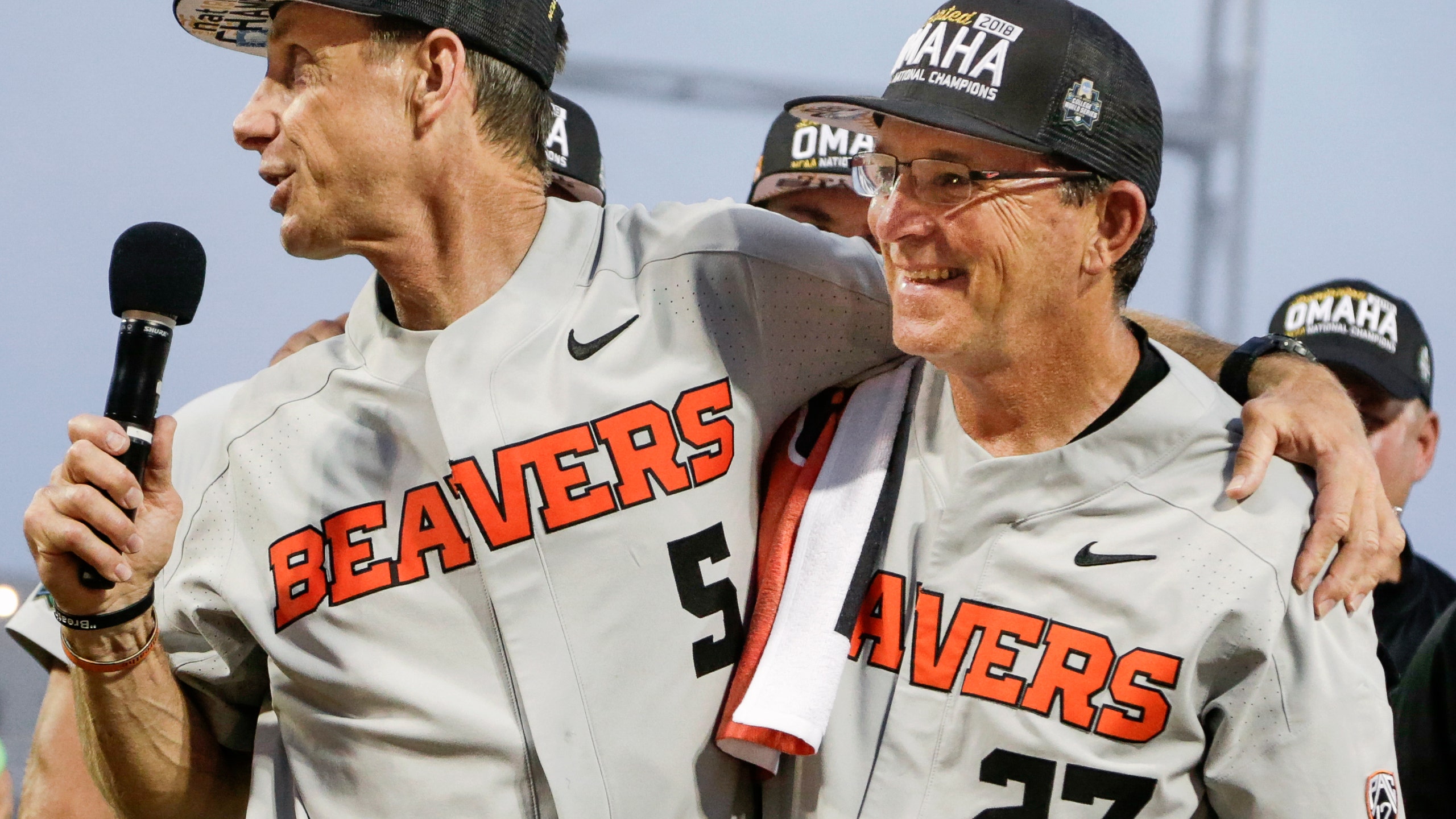 No pressure? Bailey's job is to keep champion Beavers on top

Oregon State has won 111 of its last 130 baseball games, is coming off its third national championship since 2006 and its career coaching wins leader Pat Casey retired last fall.

Enter Pat Bailey, the 63-year-old interim head coach who hopes to earn the permanent job for 2020.

"People think there's a lot of pressure," Bailey said. "I'm going to be who I am. I can't be somebody else. In terms of the pressure part, I just think people a lot of times put undue pressure on themselves and make things out to be a lot bigger than what they are."

Bailey has been through this before, though not at this level. He was successor to Casey at George Fox College in Oregon and won the Division III championship four years before he joined Casey's Oregon State staff in 2008. As a high school coach in Oregon, Bailey replaced a two-time state champion coach at West Linn and led the program to a state runner-up finish before he left for George Fox.

"Our expectations are extremely high," he said.

The Beavers begin the defense of their national title in Surprise, Arizona, when the Division I season opens Friday. They open against New Mexico, play Gonzaga on Saturday and Minnesota, the team they beat in super regionals, on Sunday.

Kevin Abel, who as a freshman won a record four games in the College World Series and threw a two-hit shutout against Arkansas in Game 3 of the finals, heads a pitching staff that remains mostly intact. Bryce Fehmel, a 10-game winner last year, and Grant Gambrell are the Nos. 2 and 3 starters, and 16-save closer Jake Mulholland returns.

The Beavers posted some of the best numbers in program history last year, and six of the players from the everyday lineup are gone. They still have catcher Adley Rutschman, the 2018 CWS Most Outstanding Player and possible No. 1 pick in the Major League Baseball draft in June, along with first baseman Zak Taylor and outfielder Preston Jones.

The Beavers, 12th in the nation in fielding last year, are without No. 4 overall draft pick Nick Madrigal at second base and Pac-12 defensive player of the year Cadyn Greiner at shortstop. Andy Armstrong will start at second after filling in for an injured Madrigal last season. Junior-college transfer Beau Phillip takes over a shortstop. Bailey's undecided on who'll play third. Joe Casey or Jones will play left field, Kyler McMahon or Jones will be in center and Tyler Malone will be in right.

The Beavers will be going for a third straight CWS appearance. In 2017, they won their first two games in Omaha before going out with two straight losses to LSU. Last year, they lost their CWS opener before winning four straight to reach the best-of-three finals.

"Our freshman year, making it so far and then coming up short, there was a lot of motivation there," Rutschman said. "I think we have the same motivation now. It's just coming from a different place, from having won a national championship and having that unbelievable experience, knowing that nothing else besides that is really going to be the same."

The preseason No. 1 team in three polls and SEC favorite returns eight position players from the team that came up one win short of making the CWS. The Commodores add one of the top freshman pitchers in the nation in 6-foot-4, 235-pound fireballer Kumar Rocker.

Antoine Duplantis needs 85 hits to overtake ex-Tiger Eddy Furniss as the SEC's career leader. Friday night starter Zack Hess returns, and so does Eric Walker after missing 2018 because of elbow surgery. AJ Labas, a 2018 Freshman All-American, had shoulder surgery and is out.

The Big 12-favorite Red Raiders have made the CWS three of the last five years and have four straight seasons with at least 45 wins. They averaged better than 8 runs per game in 2018, and they figure to be one of the top scoring teams again with 3B Josh Jung and OF Gabe Holt back.

The Bruins, picked to win the Pac-12, got good news last summer when INF Matt McLain chose to go to school after being drafted No. 25 overall by the Diamondbacks. UCLA is strong up the middle, and OF Garrett Mitchell has recovered from a concussion.

With four straight CWS appearances and seven since 2010, the Gators never seem to lack for talent. They should survive losing two hitters who accounted for 34 home runs, as well as the top two starters and the record-setting closer.

Gophers won their first regional since 1977 and will be led again by Big Ten pitcher of the year Patrick Fredrickson (9-0, 1.86 ERA) and a premier closer in Max Meyer (16 saves).

IF/OF Andrew Daschbach and OF/P Kyle Stowers combined for 27 of the team's 55 homers, and Brendan Beck (8-0) and Jack Little (16 saves) are everything one would expect of Stanford pitchers.

The Tar Heels, who beat Oregon State in their CWS opener, are looking for redemption after collapsing in the last two innings of an elimination game against the Beavers. There's plenty of pitching, and 1B Michael Busch is back to lead the offense.

That ninth-inning, two-out, two-strike foul ball that dropped between three Razorbacks in Game 2 of the CWS finals cost Arkansas a shot at its first national championship. Time to move on. 3B Casey Martin should contend for SEC player of the year, there'll be plenty of offense and closer Matt Cronin is one of the best.