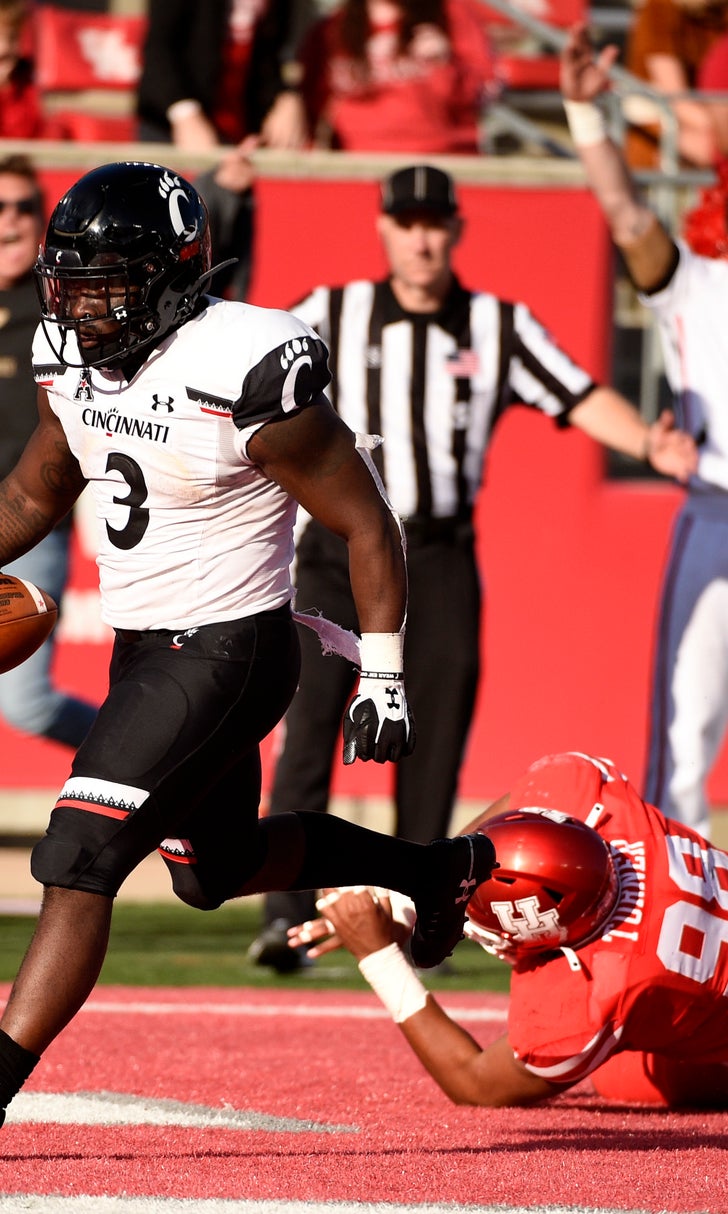 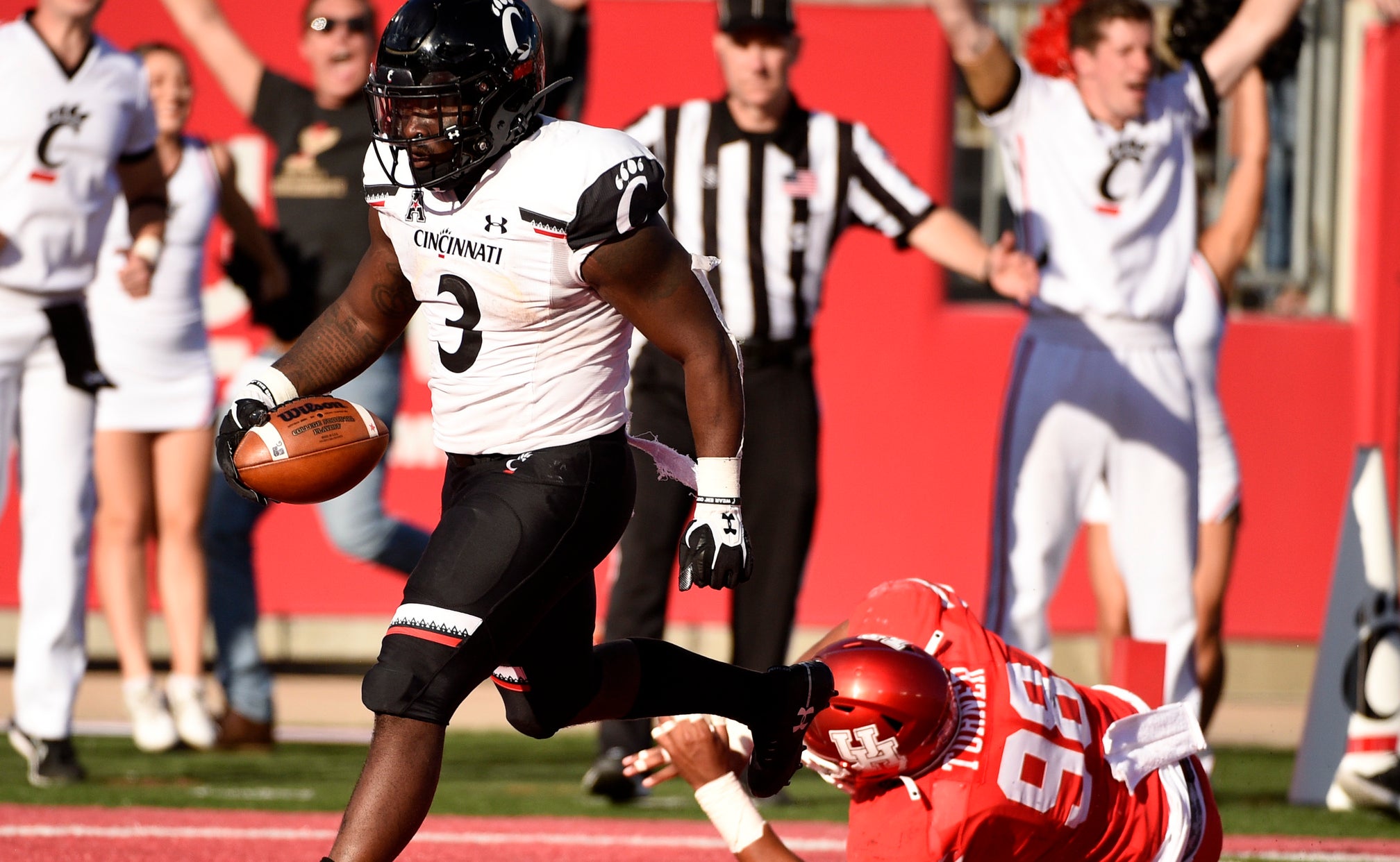 HOUSTON (AP) — Luke Fickell described No. 25 Cincinnati's fourth-straight victory as "not the prettiest thing in the world."

The Bearcats (5-1, 2-0 American Athletic Conference) used a 21-point first half to pull away early and Perry Young's late 2-yard interception return for a touchdown sealed a 38-23 road victory over Houston on Saturday.

"Nobody thought this was a trap game," Fickell said. "This is obviously a very good football team with some guys down and some guys that are redshirting. But they have a lot of talent. You can tell they have a lot of fight. Our guys fought back and, in the end, they had the ability to battle through some of those adverse situations."

Desmond Ridder finished 14 of 24 for 263 yards, three touchdowns and an interception. Ridder also had 11 carries for 50 yards and a score.

Trailing 21-10, Houston quarterback Clayton Tune, who was very limited in practice the past two weeks, re-energized the home crowd with a career-long 69-yard touchdown pass to Marquez Stevenson to start the second half.

"I thought Clayton, for not repping for two weeks, actually hung in there and did some good things," Houston coach Dana Holgorsen said. "He's our starting quarterback."

The Cougars (2-4, 0-2) cut the lead to five with 9:09 left on Tune's 6-yard pass to Christian Trahan, but it wasn't enough to prevent Houston's first 0-2 start in conference play since 2002, when the Cougars were in Conference USA.

"Came up short," Holgorsen said. "We had a chance to win in the fourth quarter. A couple of bad calls I thought prevented us from being able to get the ball back and go score. It is what it is, you have to deal with it.

Tune finished 9 of 27 for 184 yards, two touchdowns and three interceptions.

"I felt like I wasn't able to be an effective runner like I normally am," Tune said. "I was kind of limited to just staying in the pocket, but we had a gameplan to work around it. I just have to play better."

The past few weeks, Holgorsen's football program has dealt with a lot of issues that haven't been on-field related. That continued on Thursday when former Cougar Justin Murphy took to Twitter and went on a 21-tweet rant about the football program, his scholarship, knee surgeries, redshirting seniors and his final interaction with Holgorsen.

"That's a non-story in our mind," Holgorsen said. "We wish him well and I think we are doing some things within our program that are pretty beneficial towards the future of this football program."

To close the third quarter with Houston trailing 21-17, Ridder ran 14 yards before he was shoved out of bounds and fell into the Cougars' kicking net. Cincinnati's Armaud Willis-Dalton was called for unnecessary roughness. Holgorsen could be seen yelling at multiple officials after the call.

"It was a very, very critical point of the game," Holgorsen said. "We didn't do a good job of rebounding and holding them to a field goal after that happened, which is disappointing."

Cincinnati: A week after forcing four turnovers against Central Florida and limiting the Knights to their fewest points in 2019, Cincinnati's defense shined again. The Bearcats had four interceptions to run their season total to 13 and forced a fumble to help hold Houston to a season-low 23 points.Cincinnati has nine turnovers the past two games.

"The defense is doing a good job," Fickell said. "When the ball's in the air that's the thing you see different, when it goes up we are aggressive to go get it, instead of just hoping we can make a play."

Houston: With D'Eriq King redshirting the rest of the season, Houston has been seeking his permanent replacement for this year. Tune, Bryson Smith and Logan Holgorsen all got playing time. Tune started, Smith was brought in to run the wildcat formation and Holgorsen got his first playing time in the first quarter.

Cincinnati should move up with No. 23 Memphis losing to Temple on Saturday and No. 20 Virginia losing to Miami on Friday.

Houston: The Cougars travel to UConn on Oct. 19 for the teams' first meeting since 2016.