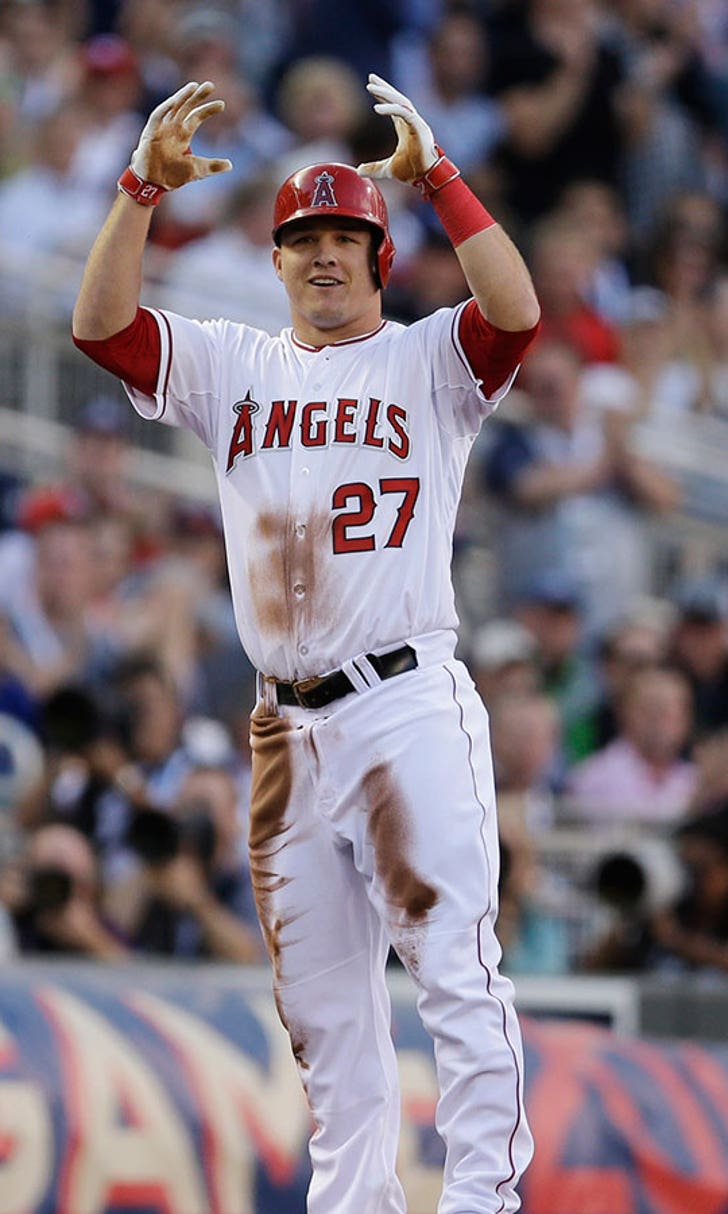 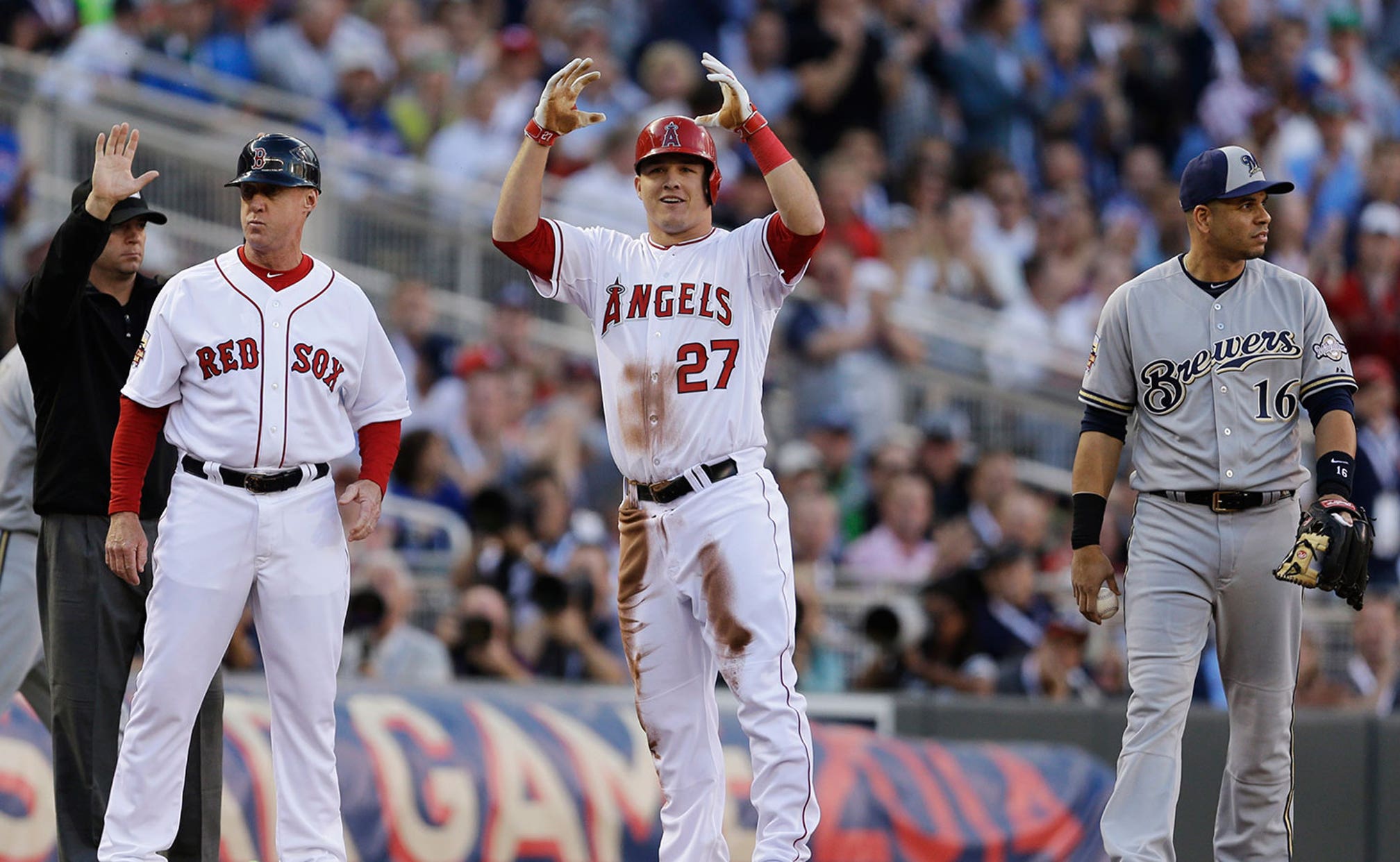 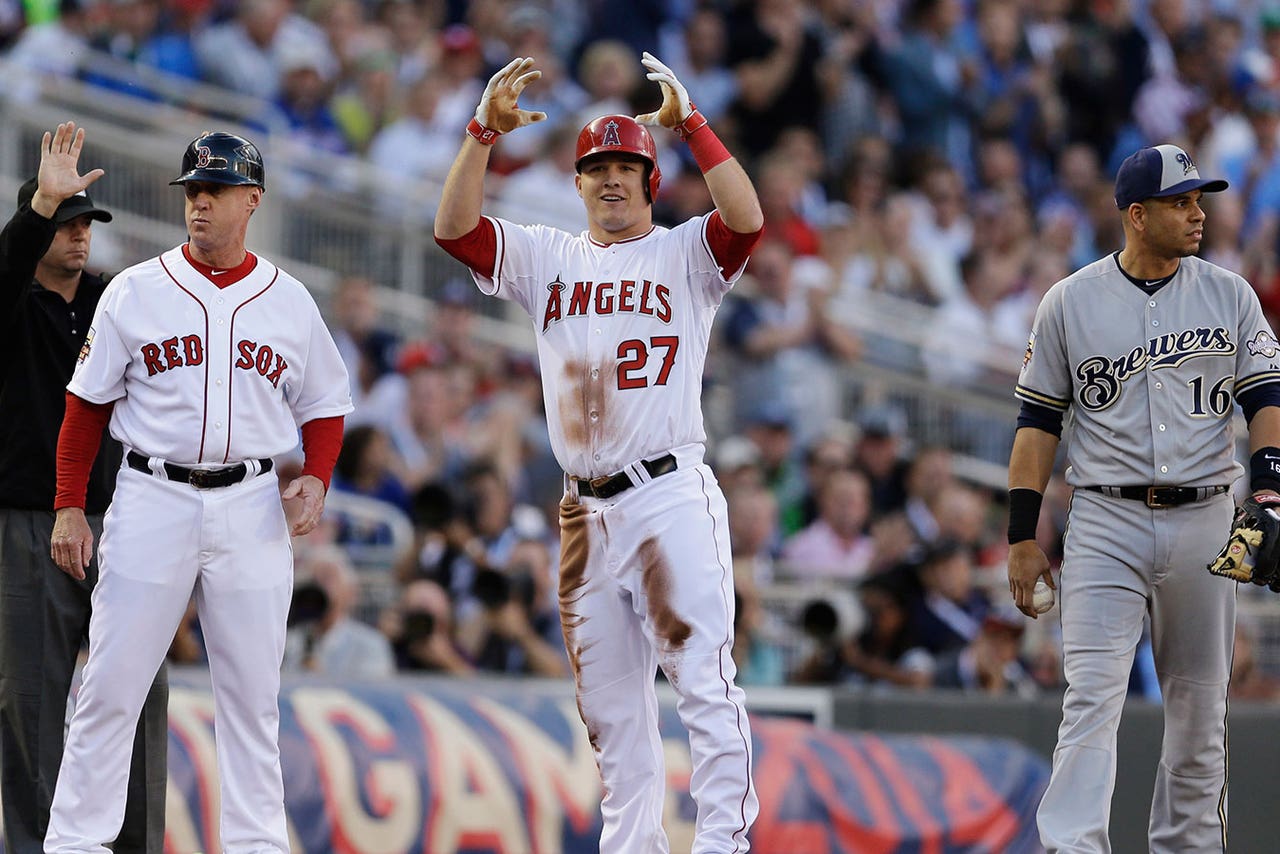 MINNEAPOLIS (AP) -- Derek Jeter soaked in the adulation from fans and players during one more night on baseball's national stage, set the tone for the American League with a pregame speech and then delivered two final All-Star hits.

Mike Trout, perhaps the top candidate to succeed the 40-year-old Yankees captain as the face of the game, seemed ready to assume the role with a tiebreaking triple and later a go-ahead double that earned the 22-year-old MVP honors.

On a summer evening filled with reminders of generational change, the AL kept up nearly two decades of dominance by beating the National League 5-3 Tuesday for its 13th win in 17 years.

"I think let Mike be Mike. I don't think people have to necessarily appoint someone to a particular position," Jeter said. "He's got a bright future ahead of him. I don't know how much better he can get, but if he consistently does what he's doing, then he will be here for a long time."

Miguel Cabrera hit a two-run homer to help give the AL champion home-field advantage for the World Series.

No matter what else happened, from the start it seemed destined to be another special event for Jeter.

He made a diving stop on Andrew McCutchen's grounder to shortstop leading off the game and nearly threw him out at first, then received a 63-second standing ovation when he walked to the plate before his opposite-field double to right leading off the bottom half. He was given another rousing cheer before his single to right starting the third and 2 1-2 minutes more applause after AL manager John Farrell sent Alexei Ramirez to shortstop to replace him at the start of the fourth.

As Frank Sinatra's recording of "New York, New York" boomed over the Target Field speakers and his parents watched from the stands, Jeter repeatedly waved to the crowd, exchanged handshakes and hugs with just about every person in the AL dugout and then came back onto the field for a curtain call.

"It was a special moment and it was unscripted," Jeter said. "I was unaware of it."

NL manager Mike Matheny of the Cardinals didn't want it to stop.

"The guys on our side have the utmost respect for him and would like to have been standing out there for a little while longer," he said. "I think Derek was the one that was uncomfortable with it."

While not as flashy as Mariano Rivera's All-Star farewell at Citi Field last year, when all the other players left the great reliever alone on the field for an eighth-inning solo bow, Jeter tried not to make a fuss and to deflect the attention.

Even during his clubhouse speech.

"He just wanted to thank us," Trout said. "You know, we should be thanking him."

While the Yankees are .500 at the break and in danger of missing the postseason in consecutive years for the first time in two decades, Jeter and the Angels' Trout gave a boost to whichever AL team reaches the World Series.

The AL improved to 9-3 since the All-Star game started deciding which league gets Series home-field advantage; 23 of the last 28 titles were won by teams scheduled to host four of a possible seven games.

Detroit's Max Scherzer, in line to be the most-prized free agent pitcher after the season, pitched a scoreless fifth for the win, and Glen Perkins got the save in his home ballpark.

Target Field, a $545 million, limestone-encased jewel that opened in 2010, produced an All-Star cycle just eight batters in, with hitters showing off flashy neon-bright spikes and fielders wearing All-Star caps with special designs for the first time.

With the late sunset -- the sky didn't darken until the fifth inning, well after 9 o'clock -- there was bright sunshine when Jeter was cheered before his first at-bat. He was introduced by a recording of late Yankees public address announcer Bob Sheppard's deep monotone. St. Louis pitcher Adam Wainwright left his glove on the mound and backed up toward second, clapping along with the crowd of 41,048.

"I tried to tell him to pick it up -- let's go," Jeter said. "But he took a moment and let the fans give me an ovation which I will always remember."

When Jeter finally stepped into the batter's box, he took a ball and lined a 90 mph cutter down the right-field line for a double.

"I was going to give him a couple pipe shots just to -- he deserved it," Wainwright said. "I thought he was going to hit something hard to the right side for a single or an out. I probably should have pitched him a little bit better."

After those in-game remarks created a stir on the Internet, Wainwright amended himself: "It was mis-said. I hope people realize I'm not intentionally giving up hits out there."

Trout, who finished second to Cabrera in AL MVP voting in each of the last two seasons, became the second-youngest All-Star MVP, about 3 1-2 months older than Ken Griffey Jr. was in 1992.

Playing in his third All-Star game, Trout followed Jeter in the first by tripling off the right-field wall. Cabrera's homer -- just the fourth in the last six All-Star games -- made it 3-0, but the NL tied it on consecutive RBI doubles by Chase Utley and Jonathan Lucroy off Jon Lester in the second and Lucroy's run-scoring double against Chris Sale in the fourth.

Trout put the AL ahead for good with an RBI double in the fifth -- a bouncer over third base against Pat Neshek, the St. Louis reliever who grew up in the Minneapolis suburbs and started his career with the Twins. Jose Altuve followed with a sacrifice fly off Tyler Clippard.

Raised in New Jersey, Trout saw a lot of Jeter and said all week he felt honored to play alongside him.

"Growing up I was setting goals to myself that when I get -- if I ever get the chance to get -- to the big leagues, that's how I want to play," Trout said. "And the way he carries himself on and off the field, how he respects the game -- always hustling, it doesn't matter what the score is. If they are down 10 runs, he is always running the ball out. That's how I want to play."