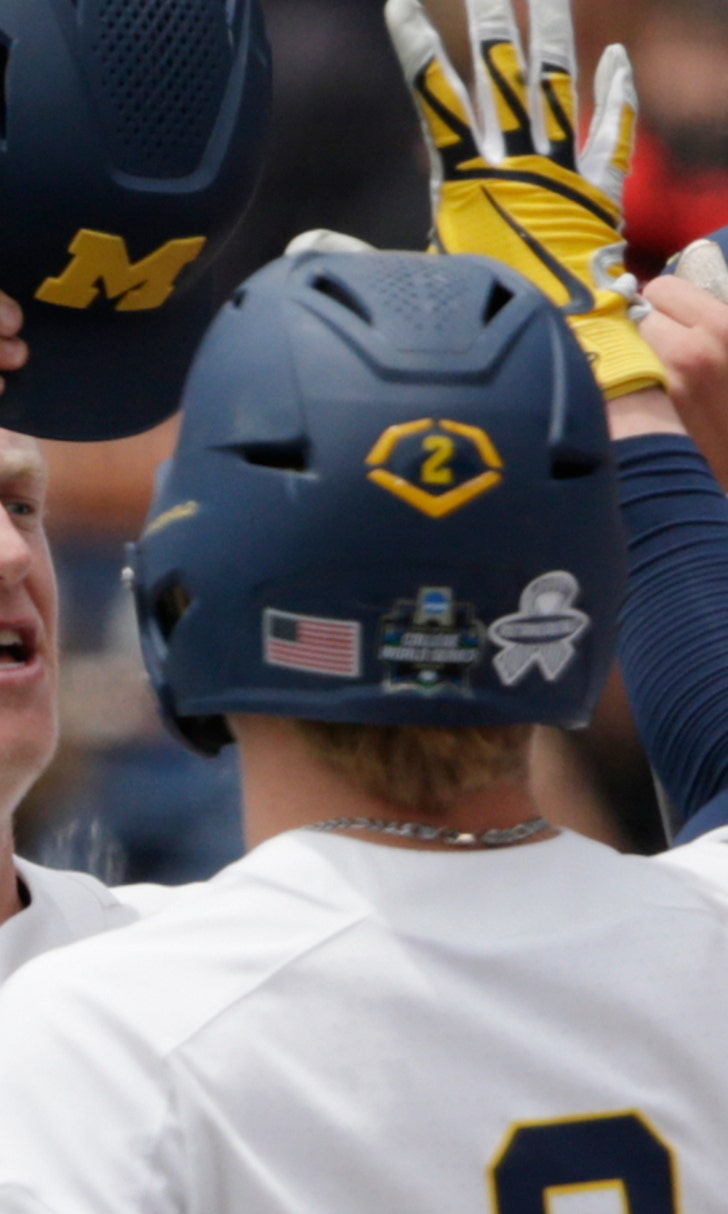 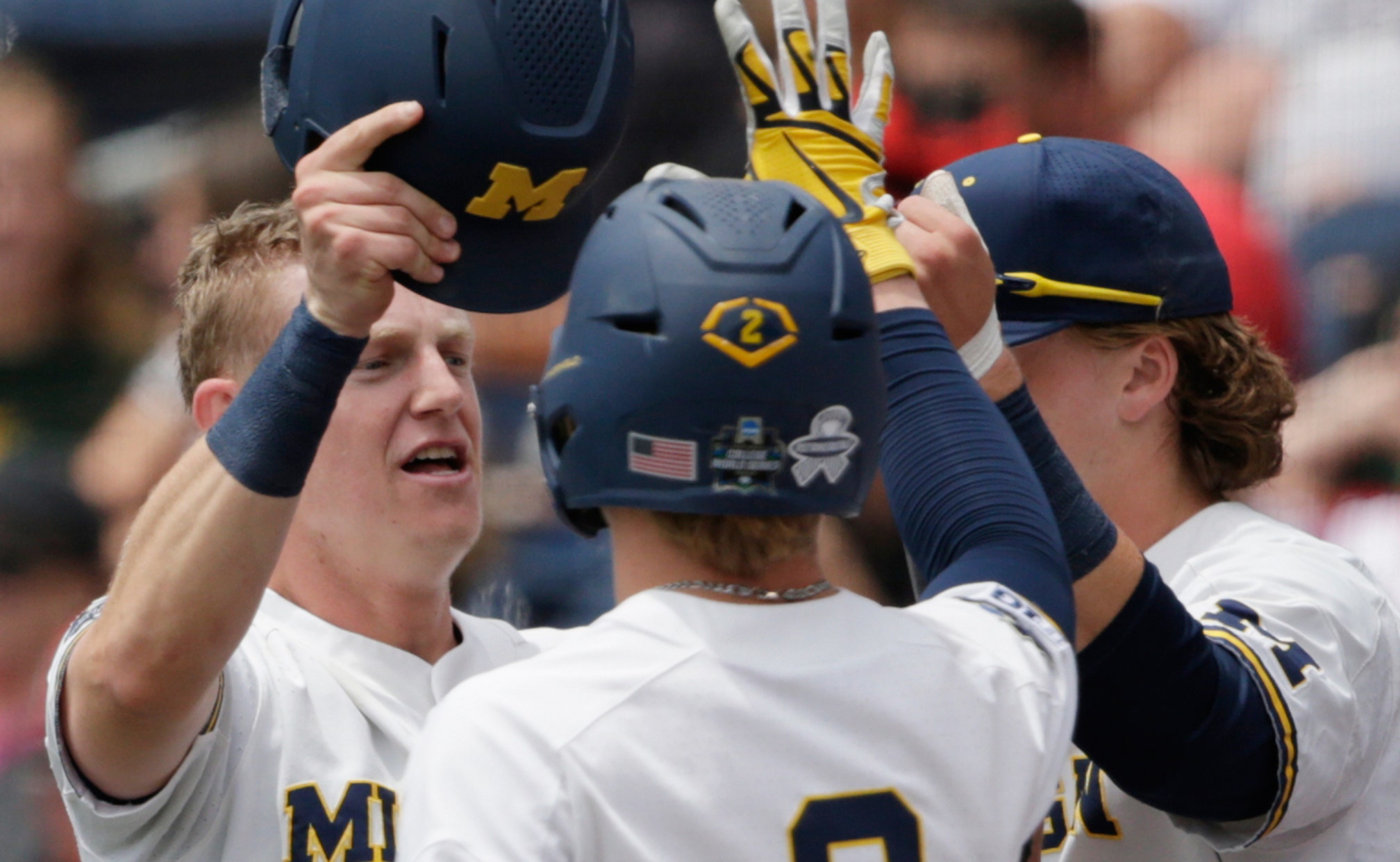 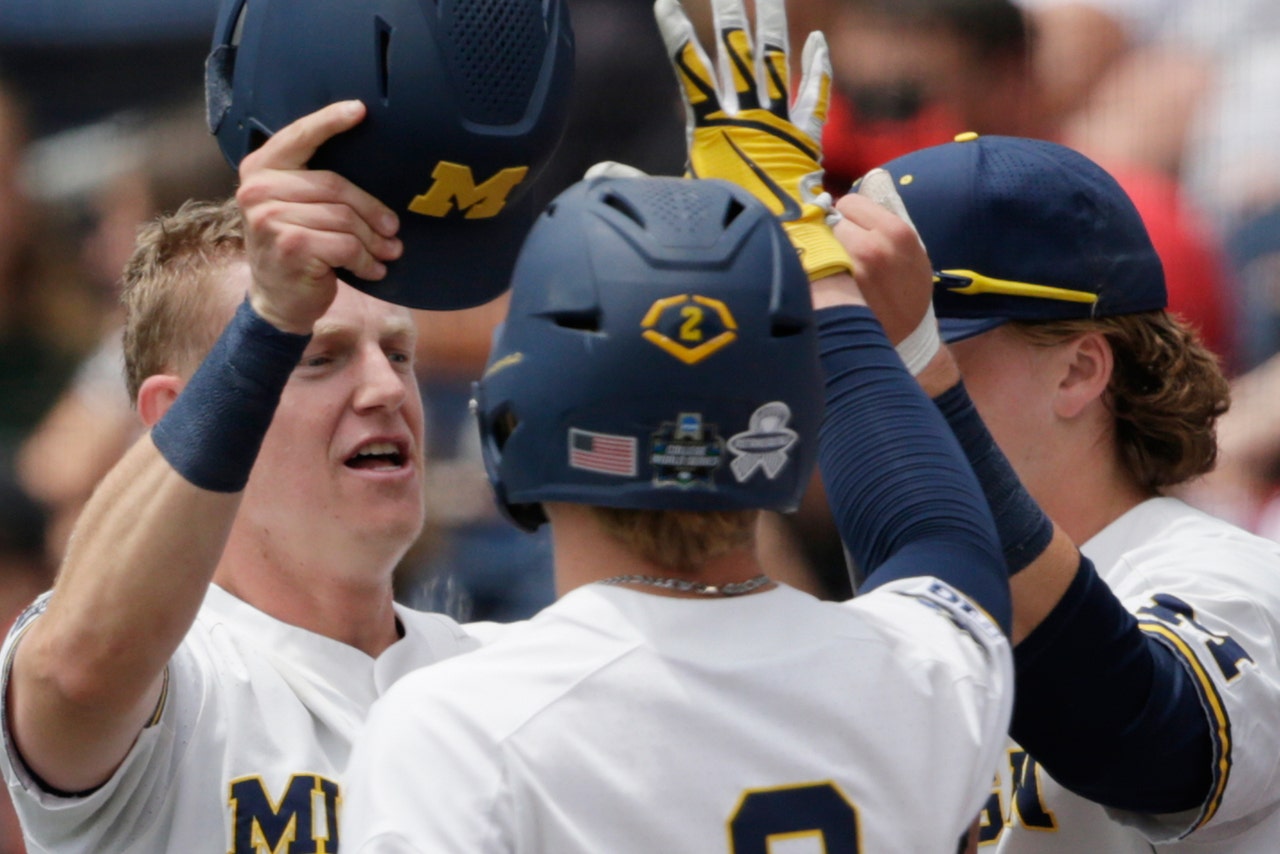 OMAHA, Neb. (AP) -- Michigan has gone from being an anxious team playing not to lose the Big Ten regular-season championship a month ago to one that is carefree and just two wins away from the national championship.

The Wolverines ended up letting that conference title slip away, and it was a lesson learned.

"Now they're loose and laughing and smiling and having a great time and not thinking ahead, not making the moment too big," Wolverines coach Erik Bakich said. "They're just playing pitch to pitch and competing as hard as they can. When they make mistakes, they're aggressive mistakes. That's a sign of a group that isn't scared and the moment isn't too big for them."

Michigan had no problem playing free and easy Friday. The Wolverines scored in all but one inning against a struggling Texas Tech pitching staff and beat the Red Raiders 15-3. Next stop is the College World Series finals, where they'll open a best-of-three series against Vanderbilt on Monday.

"I think something that's kind of been pretty beneficial for us is not really thinking about playing in the national championship or the stage that we're on," said Michigan starter Karl Kauffmann, who beat Tech for the second time in a week. "It's literally been a one-game, one-pitch mindset."

Jimmy Kerr homered twice and had four hits, Jesse Franklin had three hits and four RBIs and the Wolverines scored double-digit runs for the 20th time this season.

One of the last four teams to receive an at-large bid to the 64-team tournament, the Wolverines (49-20) were sent to Corvallis, Oregon, as a No. 3 regional seed and have won eight of their last 10 games since. That includes winning two of three against No. 1 national seed UCLA in the super regionals.

They reached the CWS for the first time since 1984 and will play for their first national championship since 1962.

Michigan is the fourth No. 3 or lower regional seed to make the finals since the tournament expanded in 1999. All three of those previous low seeds won the championship.

No Big Ten team has won the title since Ohio State in 1966.

"The conference has grown in baseball," Bakich said. "In 2015 it was a coming-out party. We had five teams go to the postseason for the first time ever. We had 53 drafted players, which tied the Pac-12. And ever since then we've done a good job as a conference of sending teams to the postseason, of having players go off to professional baseball or get drafted. The more we can do this, I think the more the Big Ten in baseball can continue to grow and be perceived as a major sport on par with some of the other major conferences in baseball."

Kauffman (12-6), who pitched seven innings last Saturday in a 5-3 victory, worked out of trouble in three innings and left after the sixth.

Tech's Micah Dallas (7-2), who took his first loss of the season after a rough three-inning outing against the Wolverines last week, was knocked out in the second after the first three batters reached. John McMillon was the first of six Tech relievers, and five of them gave up at least one run.

Tech pitchers issued 12 walks, one off the staff's season high, and gave up 14 hits.

"We're not going to focus on the negatives that happened on the field," Tech coach Tim Tadlock said. "We wouldn't be sitting here without the guys we ran out there. Our guys have a lot to be proud of. At the same time, they're definitely disappointed in the outcome."

Ten of Michigan's 14 RBIs came with two outs, and the Wolverines still left 14 runners on base. The 15 runs were the most scored against the Red Raiders since Kansas hung 17 on them in April 2018.

This was the fifth meeting between Michigan and Tech. The Red Raiders swept a three-game series in Lubbock, Texas, in March, outscoring the Wolverines 29-10. They managed six runs in two games against Michigan at the CWS.

"We played them a while back and that's not the same team we played," Tadlock said. "Their staff is to be commended for that. Their starting pitching is phenomenal. To a man, every guy in their lineup has gotten better since we've seen them. We didn't see what was coming today."

All-Big 12 right fielder and leadoff man Gabe Holt was out of Texas Tech's lineup for the fourth time in five games. He fractured his left thumb sliding into first base in the second game of super regionals June 8 and had surgery to put in pins. He was 1 for 5 in a 4-1 win over Florida State on Wednesday. Easton Murrell was in his spot at the top of the order.

Michigan has used three pitchers in the CWS through three games, making it the first team to reach the finals using three or fewer pitchers since Georgia in 1990. Kauffmann, Tommy Henry and Jeff Criswell are the only pitchers to throw for Michigan.