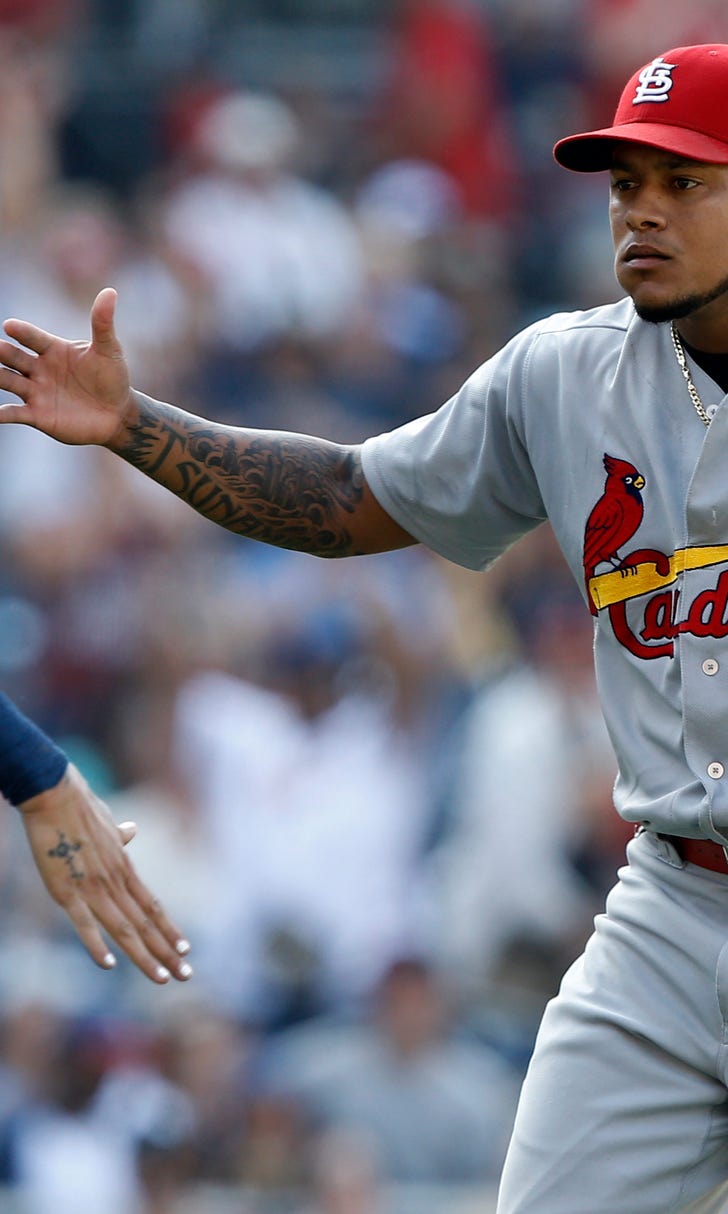 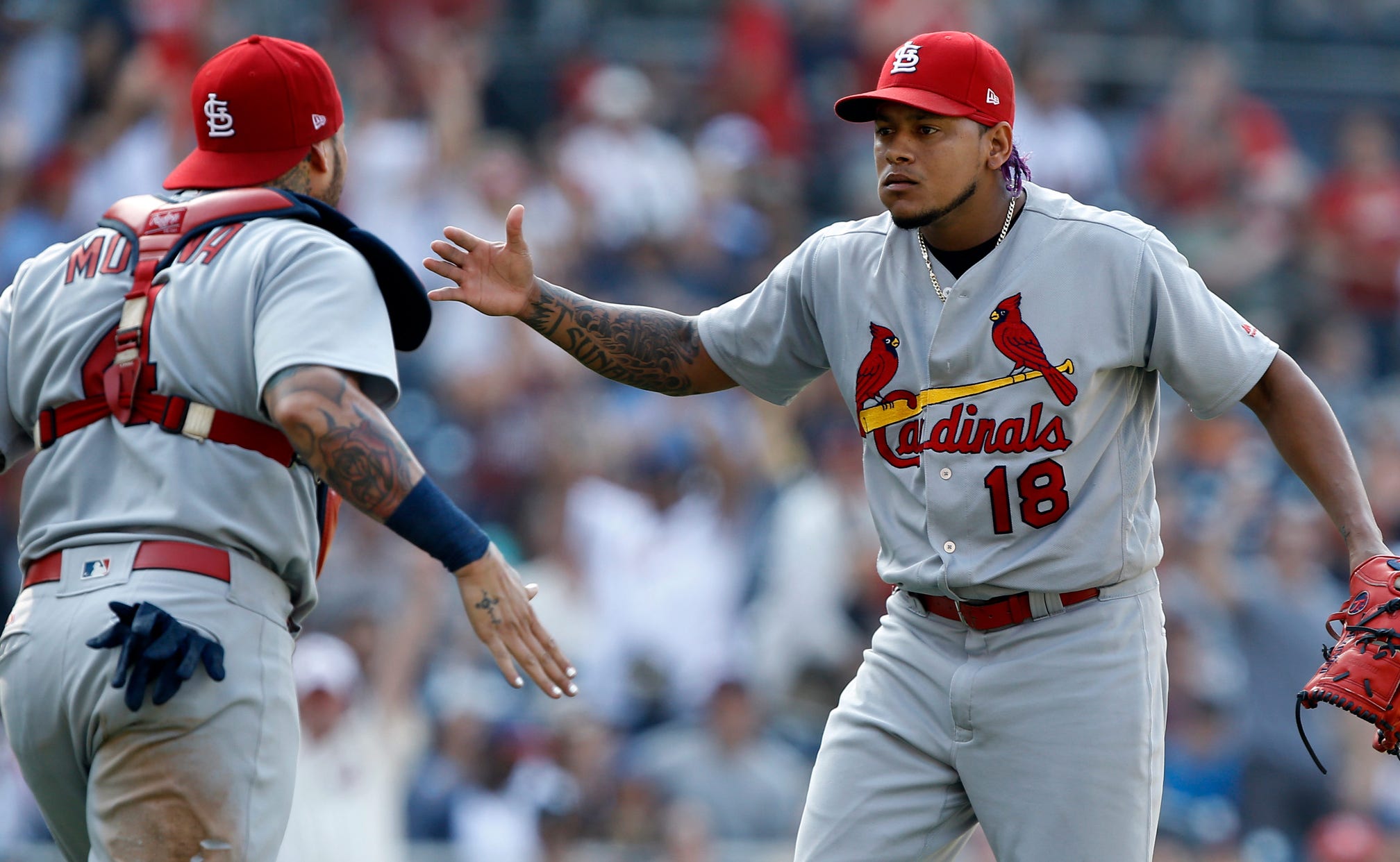 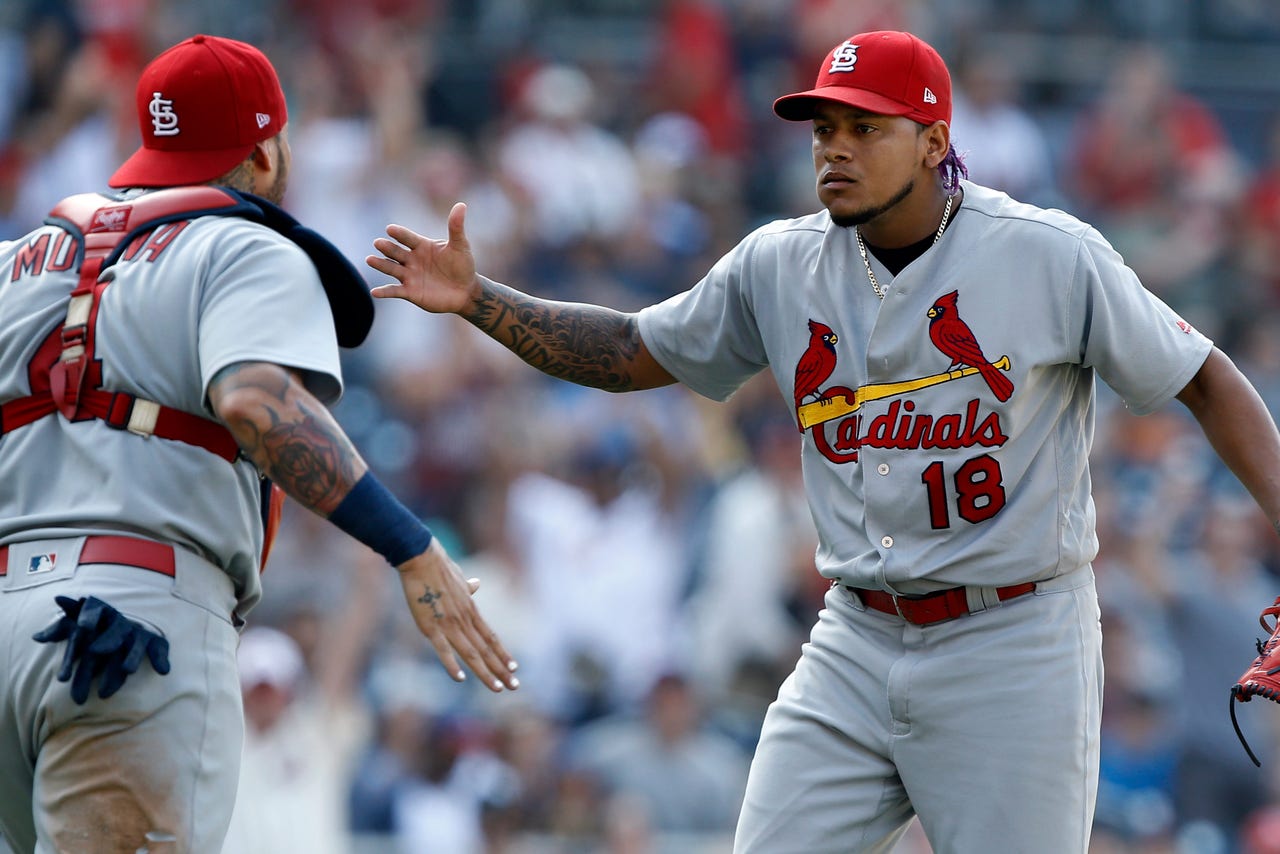 SAN DIEGO -- Carlos Martinez was having no problem hitting 98 and 99 mph with his fastball in the eighth and ninth innings.

It was a message, all right.

"I think he was trying to show us he was still OK," manager Mike Matheny said after Martinez threw a three-hitter and struck out 10 to lead the St. Louis Cardinals to a 2-0 victory Monday over the San Diego Padres.

"He did it in the eighth, too. That was for me, I think, just to show me he wasn't tired," Matheny said. "Believe me, I was cheering him on. I always am. It was set up for Carlos. He did a great job finishing it."

The right-hander was remarkably efficient, allowing only three singles and three walks while throwing 109 pitches. The Padres didn't get a runner into scoring position the whole game and never had two runners on in any inning.

Catcher Yadier Molina fielded Cory Spangenberg's soft grounder and threw him out to end the game, and then wrapped Martinez in a big hug. Molina hit a two-run, bases-loaded single in the fourth.

Martinez smiled when asked about still throwing hard in the final innings.

"In the eighth inning he asked if I was tired and I said, `No, I'm going to finish my game,' `' he said through a translator. "That was my way of showing I'm not tired.' `'

It was the second career shutout and complete game for Martinez (11-10). He got his first of each on June 10 when he threw a four-hitter and struck out 11 in a 7-0 victory against Philadelphia. He also pitched nine scoreless innings against San Francisco on May 20 in a game the Cardinals lost 3-1 in the 13th.

Martinez earned a big hug from Molina after the catcher threw out Cory Spangenberg to end the game.

"Complete games, or games where I'm really effective, I need that mentally to use that for my benefit," he said. "It shows me what I'm capable of and what kind of season I want to have and what I aspire to do."

The Cardinals remained three games behind Colorado in the race for the NL's second wild card.

"We just couldn't get anything going against Carlos Martinez today," Padres manager Andy Green said. "I thought he was really, really good. His slider was really good. Stuff was coming out great. Probably just not enough battle at-bats against him."

Luis Perdomo (7-9) pitched well except for the fourth, when the first four Cardinals reached base. Tommy Pham singled, Paul DeJong walked and Jose Martinez singled to load the bases. Molina hit a fly ball to left-center field that bounced off the glove of left fielder Jose Pirela after a long run.

Green said it was a tough play.

"It's a play I think he thinks he should make," the manager said. "It wasn't by any means an easy catch. He ran a really long way. He kind of opened that gap with Yadi. He kind of hit it right in the perfect spot."

Martinez on going back on the mound in the ninth: "It was a mutual decision. I was a little tired, but I was ready." #STLCards pic.twitter.com/447qibBVtG

Cardinals: 3B Matt Carpenter left in the fifth inning with right shoulder tendinitis. Matheny said it's been a lingering problem. ... Pham left in the seventh with a sore right shoulder. He was hurt sliding headfirst while stealing second in the fourth inning. He was checked by a trainer and stayed in the game in left field.