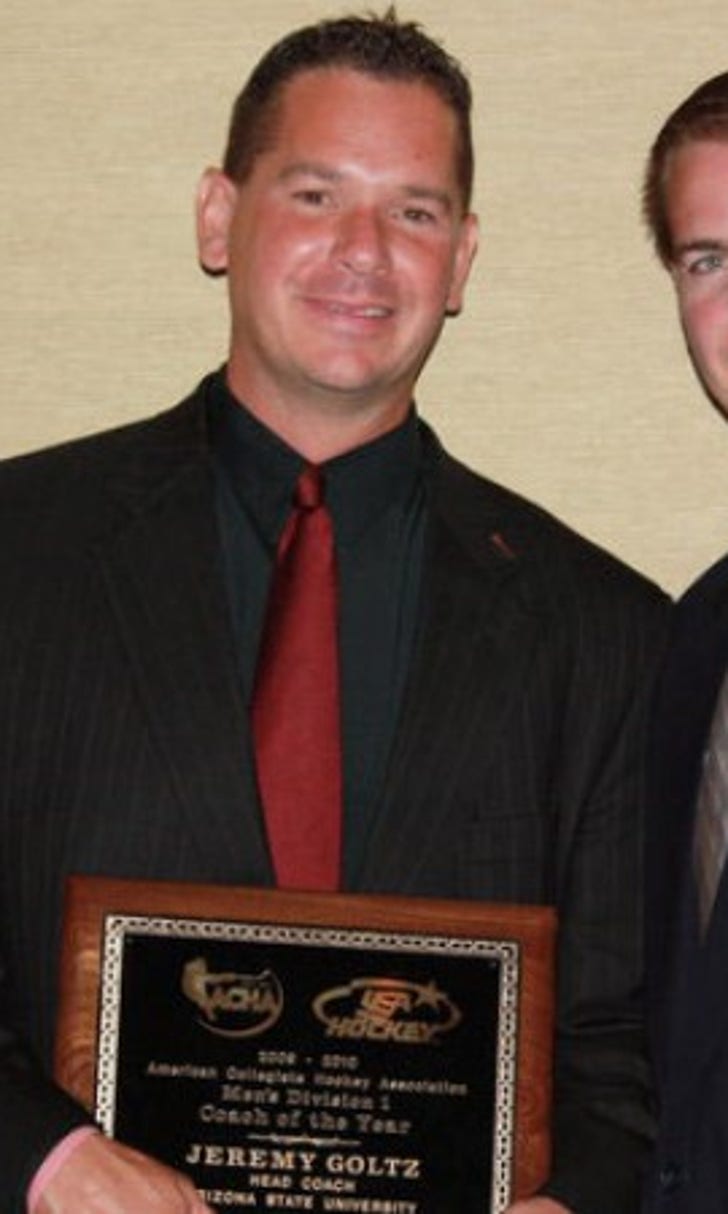 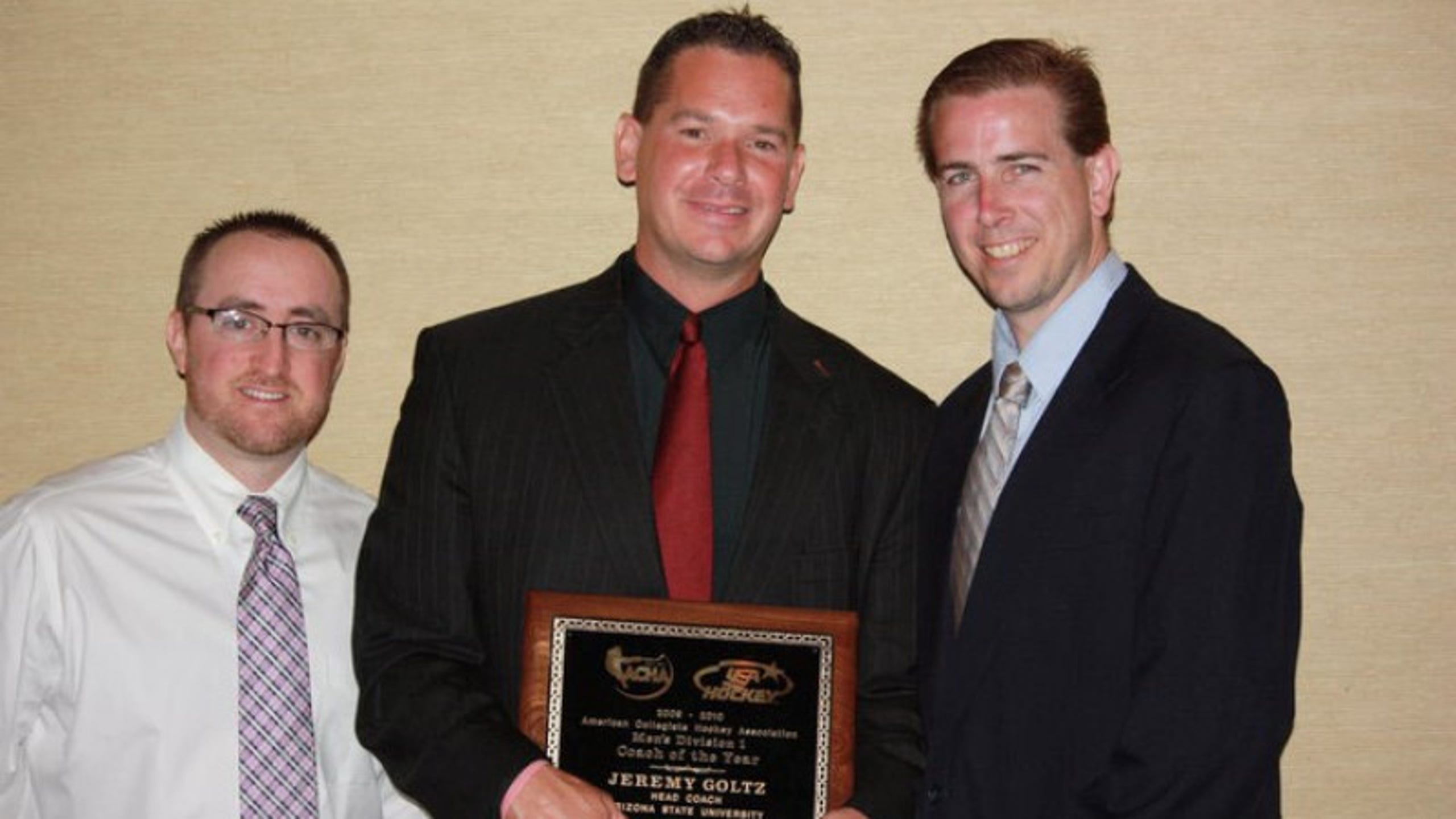 Jeremy Goltz long ago set ASU hockey on its path to Div. I 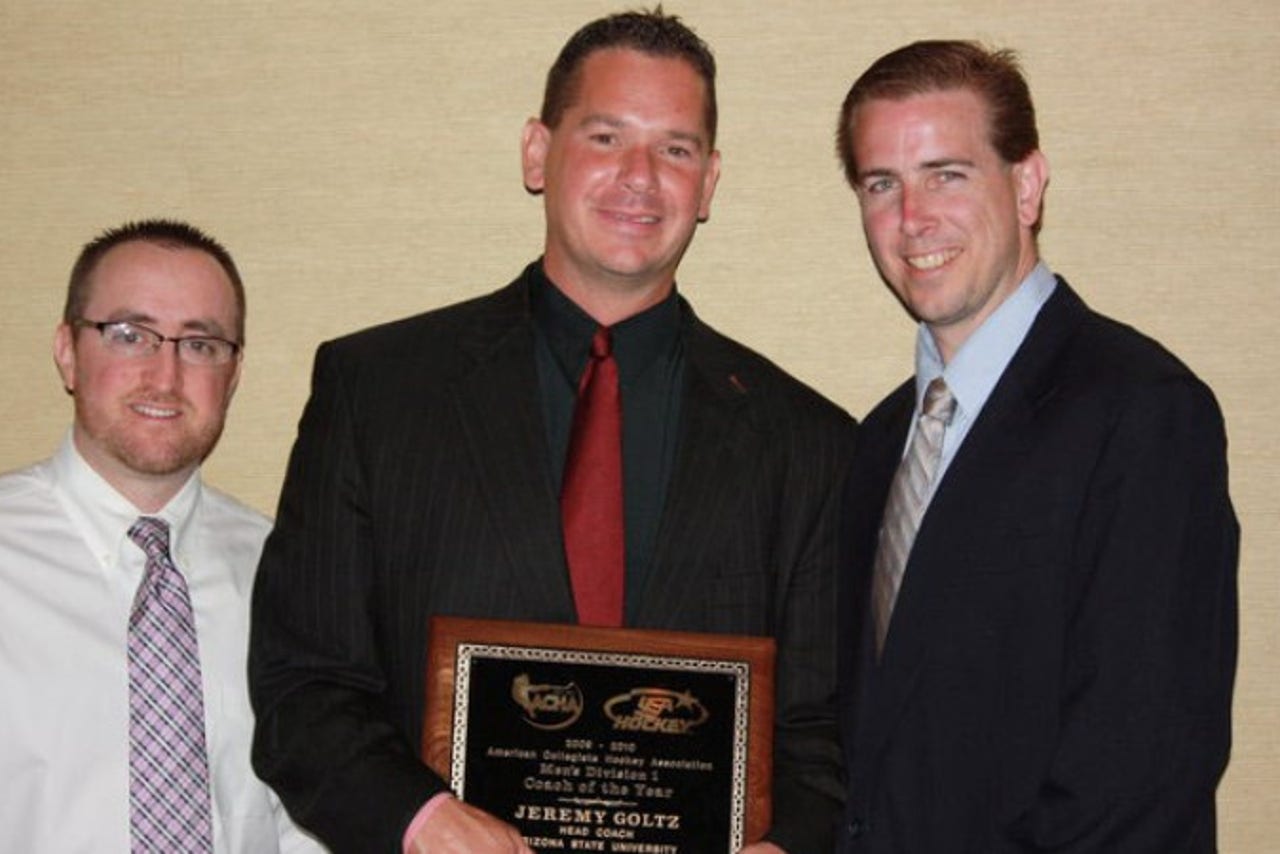 PHOENIX -- Arizona State on Nov. 18, 2014, announced its club hockey program would move to Division I. The news was extraordinary.

Local and national media heralded a new era for ASU hockey. However, a piece of the past was missing in all of the celebration: Jeremy Goltz, the head coach who turned the program around and set it on the course that led it to the highest level of college athletics.

"Back when Jeremy and I started together we never thought ASU would go NCAA Division I," said Greg Powers, the Sun Devils' current head coach and Goltz's assistant at ASU from 2008 to 2010, when the team played in the American Collegiate Hockey Association (ACHA). "We were just focused on building a solid foundation and on developing and growing the best ACHA program available. We were able to do that and it resulted in this whole thing happening."

In 2008, Goltz took a chance when a member of ASU Hockey's Oversight Committee, Wayne Reid, approached him about reinventing ASU's hockey program. Goltz's brother, Hayden, is an alumnus of ASU hockey, so Jeremy knew the program, which at the time was not held in high esteem nationally or locally. It had endured a 74-game losing streak against the University of Arizona. Arizona was viewed as being on a much higher level and more professional in its manner than ASU. Arizona players were signing autographs, while ASU couldn't even get fans to attend games.

It was at Arizona where Jeremy Goltz fell in love with hockey, as a four-year player from 1990 to 1994. After a stint in the East Coast Hockey League, a minor league that feeds to the NHL, as the first overall pick in the 1995 free-agent draft, Goltz decided that nothing measured up to his years in the ACHA.

"What it did is it kind of planted a seed with me about college hockey, and how important it is," Goltz said.

He returned to Arizona as an assistant coach in 1995. He spent six years there before leaving in 2001 to start a youth hockey league, Mission AZ Ice.

"Mission was more than just the hockey," said Chris Eades, who learned the game under Goltz and is now a player at Northern Arizona University. "It was a brotherhood and a place to grow up.

"People can say whatever they want about coach Goltz being [tough], but what he does for the players in the Mission program makes them ready for the next step in a player's career and life in general," Eades said. "He preaches and expects his players to work hard, never give up, and be responsible, respectful, and mature on and off the ice."

It was while Goltz was in the thick of running Mission AZ Ice that Reid approached him about the ASU opportunity. Changing the attitude and growing interest in the Arizona State hockey program would take work. But Goltz felt this was his chance to give back to the league that had given him so much. He accepted the job in July 2008.

The first choice for an assistant was Kurt Goar, a local hockey coach and now the current Coach-in-Chief of Arizona Hockey Union. But Goar couldn't commit.

So, Goltz turned to Powers, a former ASU hockey goaltender.

Everything about ASU hockey at that time screamed of a club hockey team with no sense of team pride or professionalism. Coming from a program that treated players like college athletes, Goltz embarked on change.

He also instilled a work ethic and a team-first mentality.

"He impacted me the most by driving my competitiveness and passion, and that mirrored the values he set in the program," said Clay Taylor, who played for Goltz at both Mission AZ Ice and ASU. "He expected us to be competitive in every game no matter who or where we were playing.

"Any team Goltz coaches he tries to get every player mentally tough, he isn't afraid to call guys out for lack of effort and expects them to respond," Taylor said. "He ran our program just like any other college hockey program with the goal to win a national championship."

In Goltz's first year, the team played at the Ice Den in North Scottsdale, nearly 20 miles from ASU's campus. It was not a location conducive to attracting ASU fans.

So, the team moved to Oceanside Ice Arena in Tempe, just two miles from campus. The team built a locker room, a viewing tower and the basic structures needed for a respectable college hockey rink. That included a Hall Of Fame wall.

"My biggest thing is when a senior graduates you put their picture up on the wall," Goltz said. "You know, just create some sort of tradition. The Hall of Fame for example, that's a tradition. You know, start giving these guys something to be proud of. That was huge. The entire feel of the organization flipped around in one year."

The program took off in Goltz's second year leading the team, jumping from unranked to eighth in the nation. The Sun Devils made it to the ACHA nationals and lost in the quarterfinals. It was the farthest Arizona State had ever advanced.

The program was finally on the map. That same year, 2010, Goltz won the ACHA Coach of the Year Award.

But Goltz's Mission AZ Ice had continued to expand and take up more of his time. Plus, some politics within his ASU program and the toll taken by being away from his family became too much for Goltz.

"The program had turned, I had done my job, and it was time to go away. Mission was growing, and I was getting pulled in a couple serious directions. It was hard and my heart was in Mission," Goltz said.

He achieved what he had come to do and could now focus all of his efforts on his youth hockey team.

Through Mission, he continues to spread the lessons he learned at Arizona and implemented at ASU. "It's a youth hockey team, but it's based on that college model," Goltz said.

Goltz is now a Arizona scout and is still running his nationally known youth hockey organization, which now has 175 players ranging in age from 4 to 18. He currently has three former youth players at ASU -- Scott Farr, Marcus Velasco and Josh Morgan -- along with 10 at NAU and numerous others in junior leagues around the country.