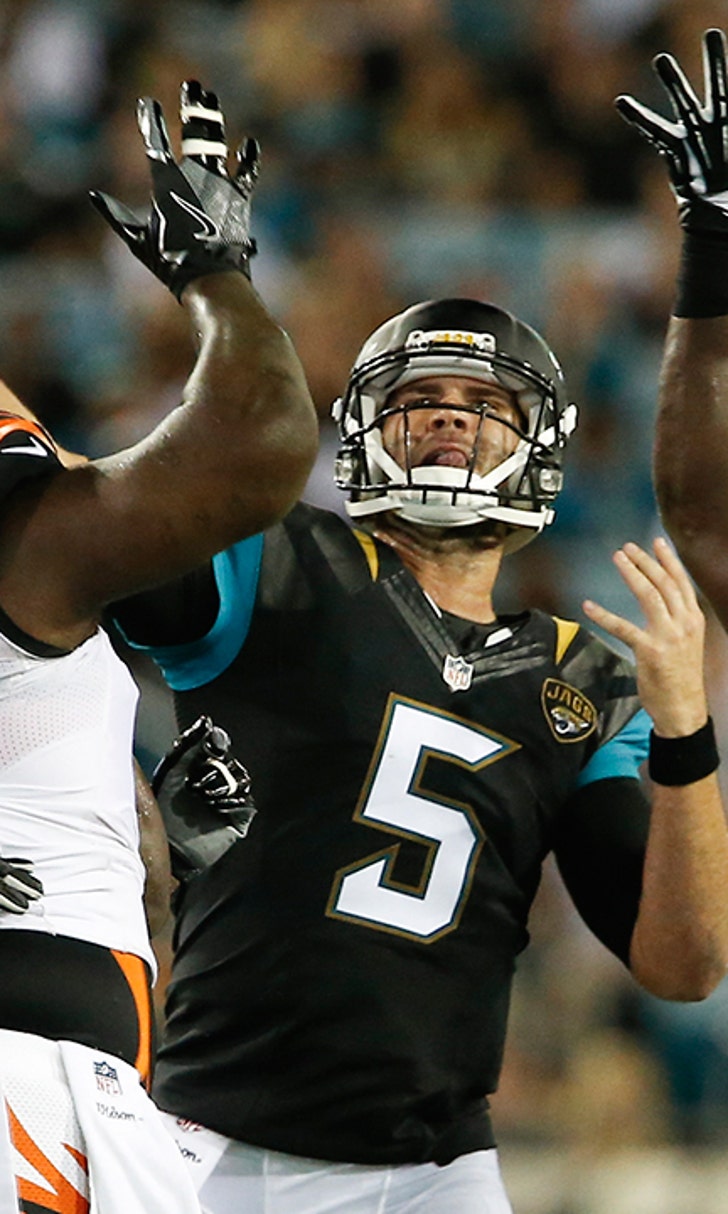 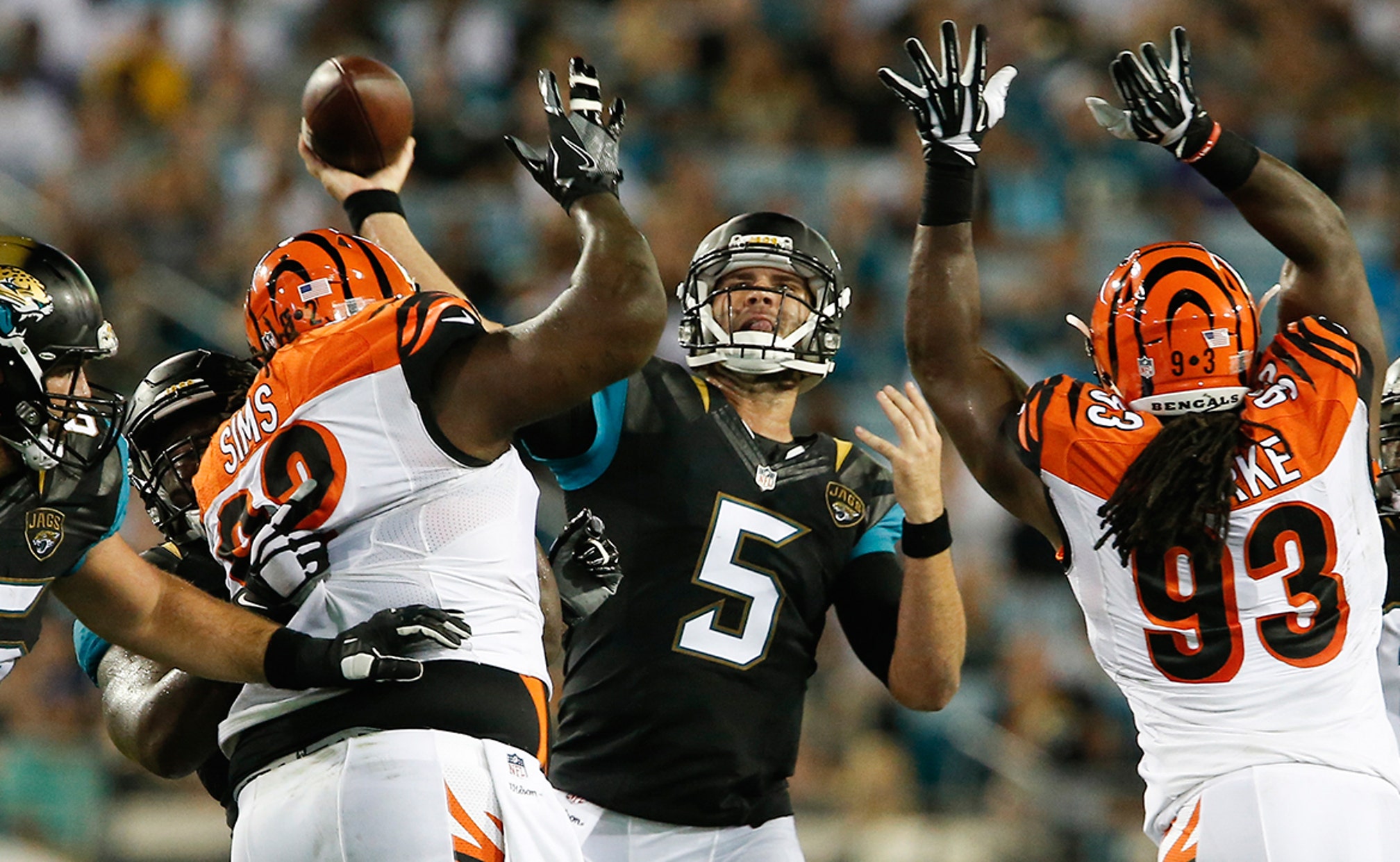 Jaguars get win, but starting offense, defense struggle vs. Bengals 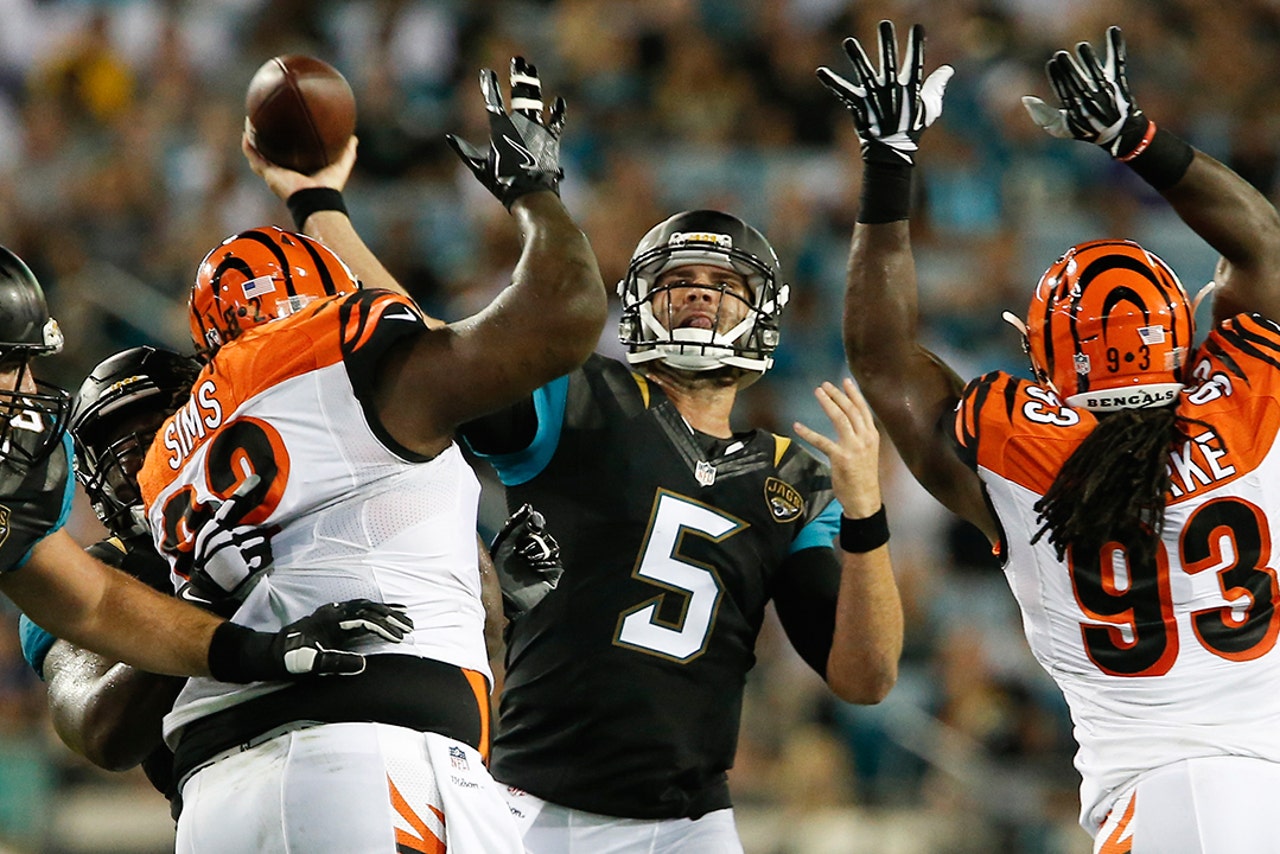 JACKSONVILLE, Fla. (AP) -- The Cincinnati Bengals were so sharp against Jacksonville that Andy Dalton and several teammates were done long before halftime.

Dalton led the Bengals to two touchdowns in three possessions, earning him a little extra rest in a 26-21 loss to the Jaguars in the preseason Sunday night.

"It was a good outing for us," said Dalton, who completed 6 of 10 passes for 77 yards and a TD. "Two touchdowns in the first half of a preseason game is pretty good, and we got them both ways. ... It's a good feeling to do it both ways."

The Bengals (1-2) felt good on both sides of the ball, too. Dalton found Giovani Bernard for a 19-yard score on a third-down play, and then Jeremy Hill capped a 9-minute drive with a 1-yard scramble to the pylon. Defensively, the Bengals held Jacksonville to just 90 yards in the first half. Jacksonville's first three drives: turnover, three-and-out and three-and-out.

Cincy's only concern in the regular-season dress rehearsal was the health of three Pro Bowlers.

Receiver A.J. Green left in the first quarter with a bruised right knee, but said he's fine. Cornerback Adam Jones strained his right calf in preseason warmups and did not play. And special teams ace Cedric Peerman broke his left forearm and could be out for the season.

"It's unfortunate guys have injuries, but you can't worry about that," Dalton said. "You've got to worry just about the stuff you can control."

The Jaguars (1-2) had bigger problems -- the offense and defense both failed to show -- that raised questions about what's supposed to the franchise's most talented team in nearly a decade.

T.J. Yeldon fumbled on the opening possession. Center Brandon Linder and quarterback Blake Bortles each were flagged for false starts to open drives. And the left side of Jacksonville's revamped offensive line was mostly manhandled.

"We kind of killed ourselves. We did some stupid things, really, at every position," Bortles said. "They didn't do necessarily anything to stop up, which is a good sign because it's a good defense. ... We were comfortable and confident in what we were doing. We just didn't execute it and get things done."

Bengals: WR Alex Erickson scored for the third straight game, stating his case to make the team. Erickson caught a 21-yard TD pass from AJ McCarron early in the third quarter. It was his second TD catch of the preseason. He also returned a punt for a touchdown.

Jaguars: DE Yannick Ngakoue got the start ahead of Dante Fowler Jr., but only because the Jaguars wanted to see Ngakoue get some snaps with the first-team defense. Ngakoue finished with two tackles.

Jaguars: Fourth-year RB Joe Banyard ran 11 times for 54 yards, including a 7-yard TD run in the third quarter, and had his most extensive work of the preseason. Banyard and Corey Grant are competing to be the fourth-string back.

Bengals: LB Vontaze Burfict and TE Tyler Eifert were among a dozen players ruled out before the game.

Bengals: "I do feel faster this year because I feel healthier." -- Hill.

Jaguars: "Well, we played pretty bad. I don't think we did a whole lot of things. We played bad at every position and usually that is what happens when you play bad: you do not score a lot of points." -- quarterback Blake Bortles.