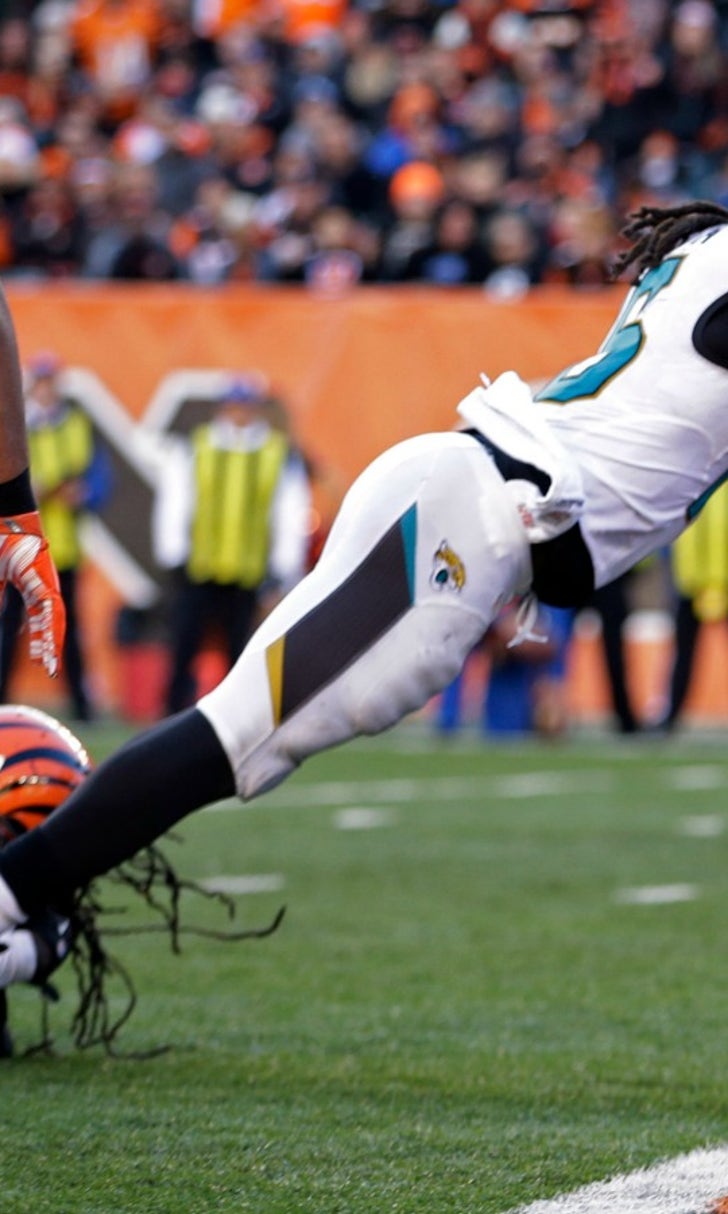 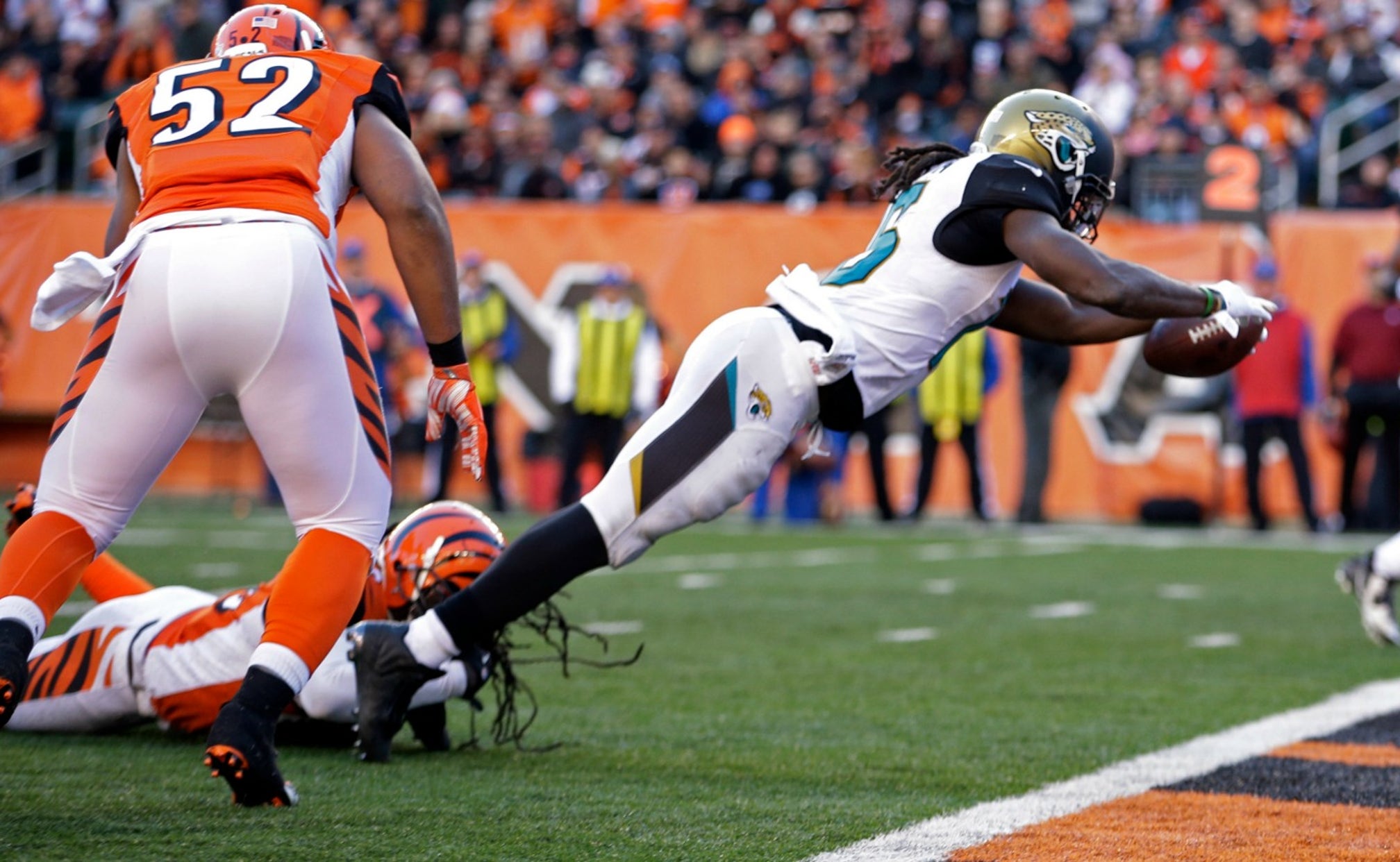 Jaguars come up short at Bengals in sloppy game 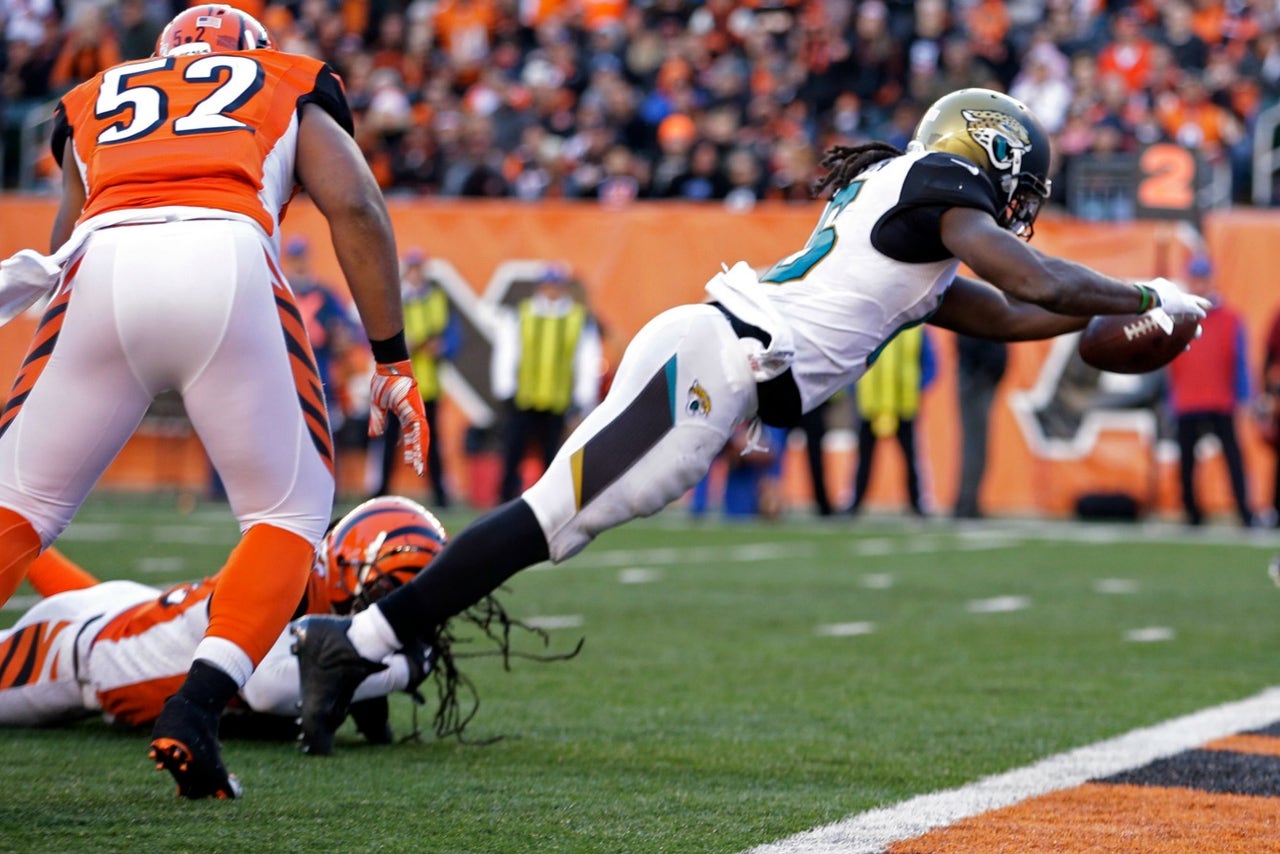 CINCINNATI (AP) -- Blake Bortles wanted to throw the ball away.

Instead, he threw it to safety George Iloka in the end zone.

Another interception by the rookie ended Jacksonville's final chance to pull out a win.

Jeremy Hill ran for a career-high 154 yards and a pair of touchdowns on Sunday, including a 60-yarder in the fourth quarter that helped the Cincinnati Bengals hold on for a 33-23 victory over Jacksonville.

Nothing new for the Jaguars (1-8), who are accustomed to playing not quite good enough.

"You've got to figure out ways to win," receiver Cecil Shorts said. "That's definitely the next thing to get over that hump. As an offense, defense special teams, every category we could've done better and we still had a chance at the end."

Andy Dalton threw a pair of touchdown passes, one of them to A.J. Green in the Pro Bowl receiver's return from a toe injury, but also had a pair of interceptions that kept it close.

The Jaguars (1-8) turned Dalton's second interception into Denard Robinson's 5-yard touchdown run, cutting it to 26-23. Hill broke his 60-yard touchdown run on Cincinnati's next play from scrimmage and finished with the most yards by a Bengals running back in five years.

Bortles, who leads the NFL in interceptions, helped the Bengals put it away by throwing an interception in the end zone with 3:55 left.

"I tried to throw it out of the end zone," said Bortles, who was 22 of 33 for 247 yards with a pair of touchdown passes to Allen Hurns. "It wasn't what I wanted. It didn't come out of my hand great."

Jacksonville was headed directly from Cincinnati to London, England, where the Jaguars will play the Dallas Cowboys next Sunday. They had a lot to think about on the long flight.

The Bengals held onto first place in the AFC North despite a sloppy game. They host intrastate rival Cleveland on Thursday night and will need to play better than they did against a one-win team.

Dalton was 19 of 31 for 233 yards with two interceptions and two sacks. He had a 19-yard touchdown pass to Mohamed Sanu that put the Bengals ahead to stay in the second quarter. While Green was sidelined for three games by an injured big right toe, Sanu developed into the Bengals' top playmaker.

Sanu had four catches for 95 yards on Sunday, including an over-the-shoulder catch for a 33-yard gain in the first half. He held on for a 36-yard gain on the opening drive of the second half despite being leveled by Josh Evans, setting up Hill's 1-yard touchdown run for a 19-3 lead.

Green could have had a 12-yard touchdown catch in the first half, but it was nullified because he lined up beyond the line of scrimmage. Green finished with three catches for 44 yards in limited plays.

The Jaguars had trouble getting off punts in the first half. One of Bryan Anger's kicks was deflected, giving the Bengals good field position. Mike Nugent's 31-yard field goal made it 10-3.

Jacksonville went three-and-out on its next possession, and Taylor Mays blocked Anger's kick out of the end zone for a safety.

The Bengals honored Mount St. Joseph basketball player Lauren Hill, who played her first game across town on Sunday despite an inoperable brain tumor. They showed her basket on the videoboard during a timeout. Defensive tackle Devon Still wore her name on his eye black strips, and left tackle Andrew Whitworth had her No. 22 on his gloves.

Notes: Bengals right tackle Andre Smith sprained his left ankle in the first half, returned before halftime but sat out the second half. Cornerback Leon Hall was being evaluated for a concussion in the second half. Hill missed a series in the first half after twisting his left knee. ... Jaguars guard Brandon Linder (shoulder), Evans (shoulder) and linebacker Jeremiah George (sprained ankle) left the game and didn't return. ... Hill's 154 yards were the most by a Bengals running back since Cedric Benson ran for 189 yards in a 45-10 win over Chicago on Oct. 25, 2009.

Marshall's Keys: Browns vs. Bengals
Brandon Marshall of 'First Things First' breaks down what it will take for the Browns to avoid an 0-2 start on Thursday.
23 hours ago
those were the latest stories
Want to see more?
View All Stories
Fox Sports™ and © 2020 Fox Media LLC and Fox Sports Interactive Media, LLC. All rights reserved. Use of this website (including any and all parts and components) constitutes your acceptance of these Terms of Use and Updated Privacy Policy. Advertising Choices. Do Not Sell my Personal Info