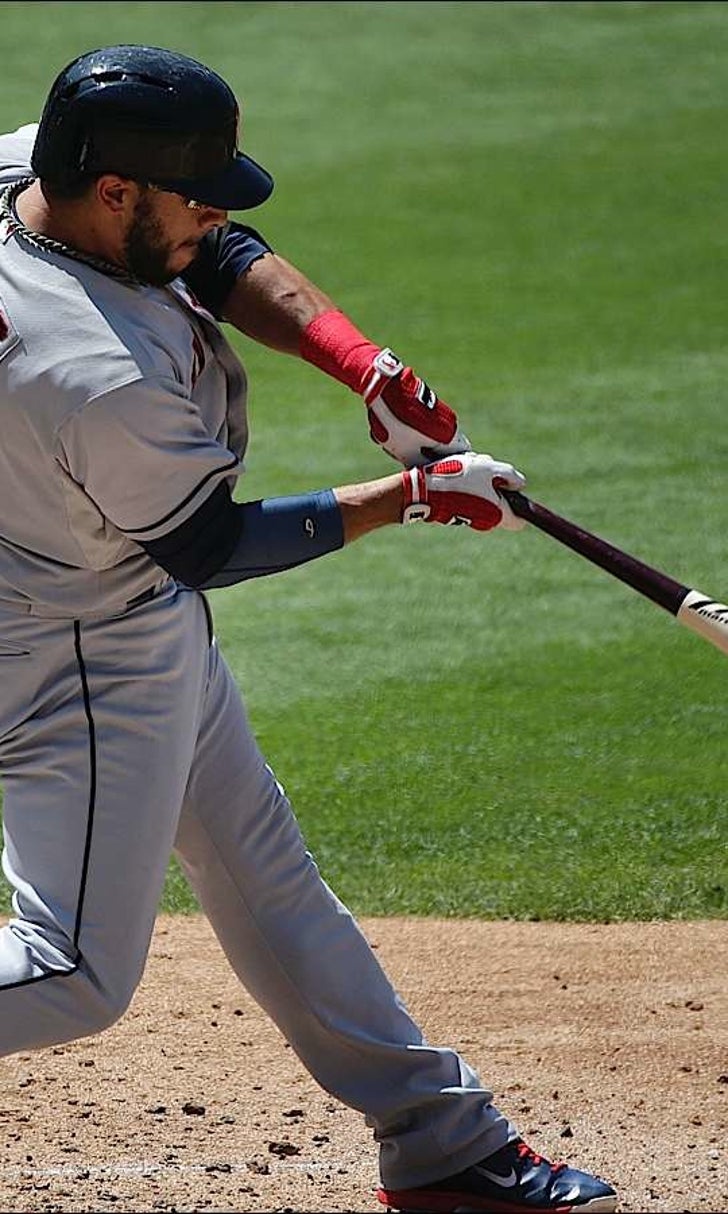 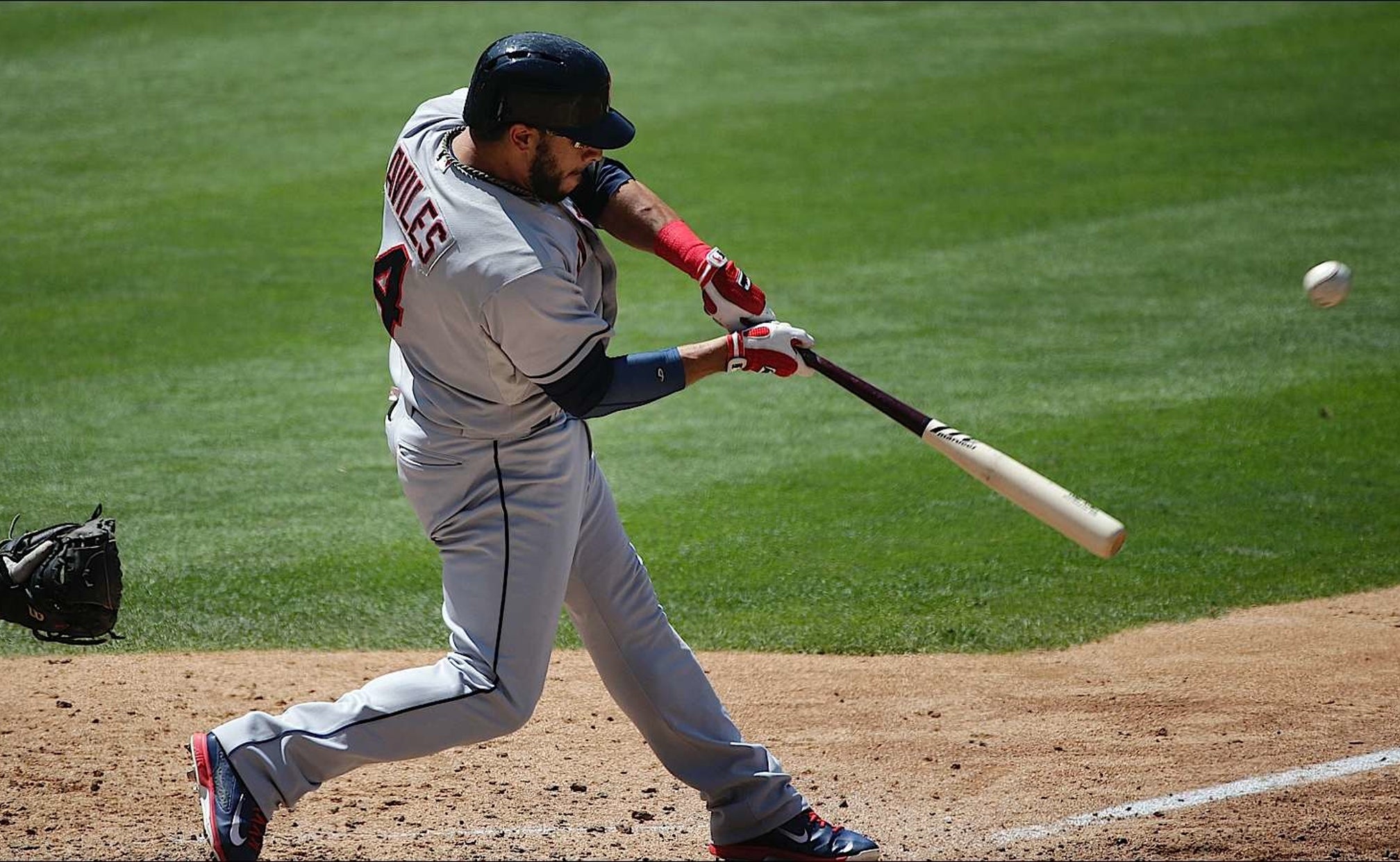 Indians rally with 3 in 8th to beat Dodgers 5-4

LOS ANGELES (AP) -- The Cleveland Indians had plenty to talk about on the flight home at the end of a 4-4 road trip.

There were back-to-back losses in one-hit shutouts, and a rare 7-2-4 triple play that required two video replays to confirm. There was also the three-run eighth inning they had against Brian Wilson on Wednesday, which Mike Aviles capped with a two-run single en route to a 5-4 victory over the Los Angeles Dodgers.

"We went 4-4, but it seems like we were gone a month," manager Terry Francona said. "It's been a long trip, and this was a good way to end it. We won a tough game. That was a good one to win."

After Scott Atchison gave up a solo homer by Scott Van Slyke in the eighth, Cody Allen got four outs for his eighth save. He retired Matt Kemp on a flyball to the warning track with the potential tying and winning runs in scoring position.

Ryan Raburn homered off Hyun-Jin Ryu, who was lifted after seven with a 3-2 lead. But Wilson (1-3) retired only one of the six batters he faced, giving up a tying single by pinch-hitter David Murphy and Aviles' clutch hit after an intentional walk to Lonnie Chisenhall.

"Anytime you can get a hit and some RBIs, it's always great," Aviles said. "I was just looking for pitch up. I know he throws a bunch of cutters and he throws hard. He's been a good pitcher for a long time.

"The arms that are coming out of that bullpen are pretty interesting, and they're definitely good. So you've got to piece together some ABs and try and do things together," he added. "I definitely have faith in our bullpen. So I knew if we got a couple of runs there, it would work out well. It's always great when you can sneak out with a win at the end."

Wilson had allowed one run in his previous 19 appearances, spanning 16 2-3 innings.

"Brian's been throwing well. I don't know how many innings he's thrown before today without giving up a run, but it seemed like a while," said Van Slyke, who threw a runner at home plate from right field. "When you make a mistake, it usually ends up biting you. Hopefully, that's out of the way and he can start a new streak."

Brian Shaw (3-1) pitched a scoreless seventh to get the victory.

Ryu allowed two runs and seven hits, struck out eight, and hit an RBI double that triggered a three-run fifth. The left-hander did not walk a batter, his 13th straight outing with fewer than three bases on balls.

Dodgers starting pitchers have issued fewer than three walks in 36 consecutive games, tying the 2005 Minnesota Twins for the longest such streak in the modern era (since 1900).

Dodgers rookie Miguel Rojas, who has made dazzling plays all over the infield since his promotion from Triple-A -- one of which preserved Clayton Kershaw's no-hitter on June 18 -- made his seventh start at third base and robbed Michael Brantley of an RBI in the fifth with a diving backhanded grab of his line drive toward the line.

"The past 10 or 15 days, Michael's hit a lot of balls hard but right at people. So I thought he could use a hug right there," Indians starting pitcher Trevor Bauer said. "I think he was still kind of upset about the outcome of that play."

Carlos Santana followed with a sharp single to right field, but Van Slyke made a one-hop throw to catcher A.J. Ellis for the tag on Asdrubal Cabrera.

The plays by Rojas and Van Slyke prevented the Indians from increasing their 2-0 lead, and may have kept Ryu in the game with 80 pitches already in the bank. He came up in the bottom half and roped a two-out RBI double that scored Rojas all the way from first base.

Bauer then walked Dee Gordon and Ellis, loading the bases, and Andre Ethier lined a 2-2 pitch to center for a two-run single that put Los Angeles ahead 3-2.

"I just missed with some pitches. I felt a little out of synch that whole inning," Bauer said.

Bauer gave up three runs and six hits over 5 2-3 innings. The 23-year-old righty from UCLA, born in North Hollywood and pitching in California for the first time in the majors, remained 0-5 in nine career road starts with a 6.64 ERA.

NOTES: Kershaw, picked Wednesday as NL Pitcher of the Month for June after winning all six starts with an 0.82 ERA and 61 strikeouts, starts Friday night's series opener at Colorado against the pitcher who opposed him in his no-hitter on June 18 -- Jorge De La Rosa. ... Chisenhall entered Wednesday hitting .344, three points shy of league leader Jose Altuve of Houston -- but was five plate appearances shy of the number he needed to qualify for the AL batting race. The Indians haven't had a batting champion since Bobby Avila in 1954.