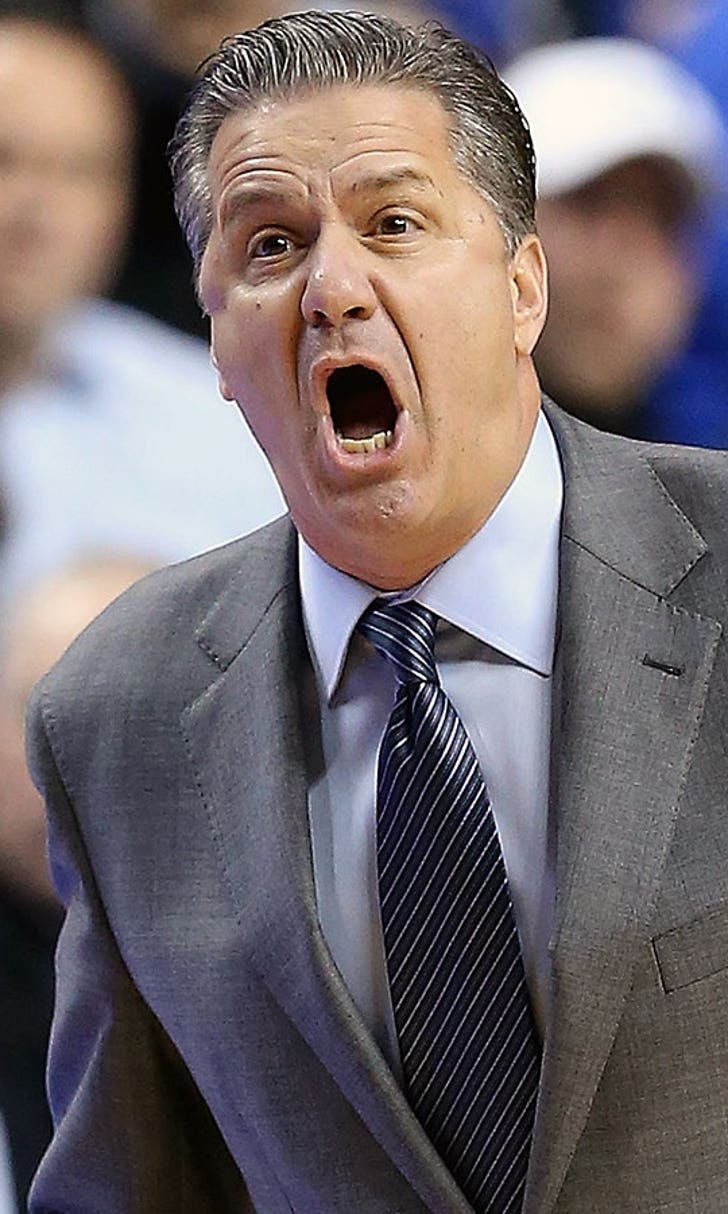 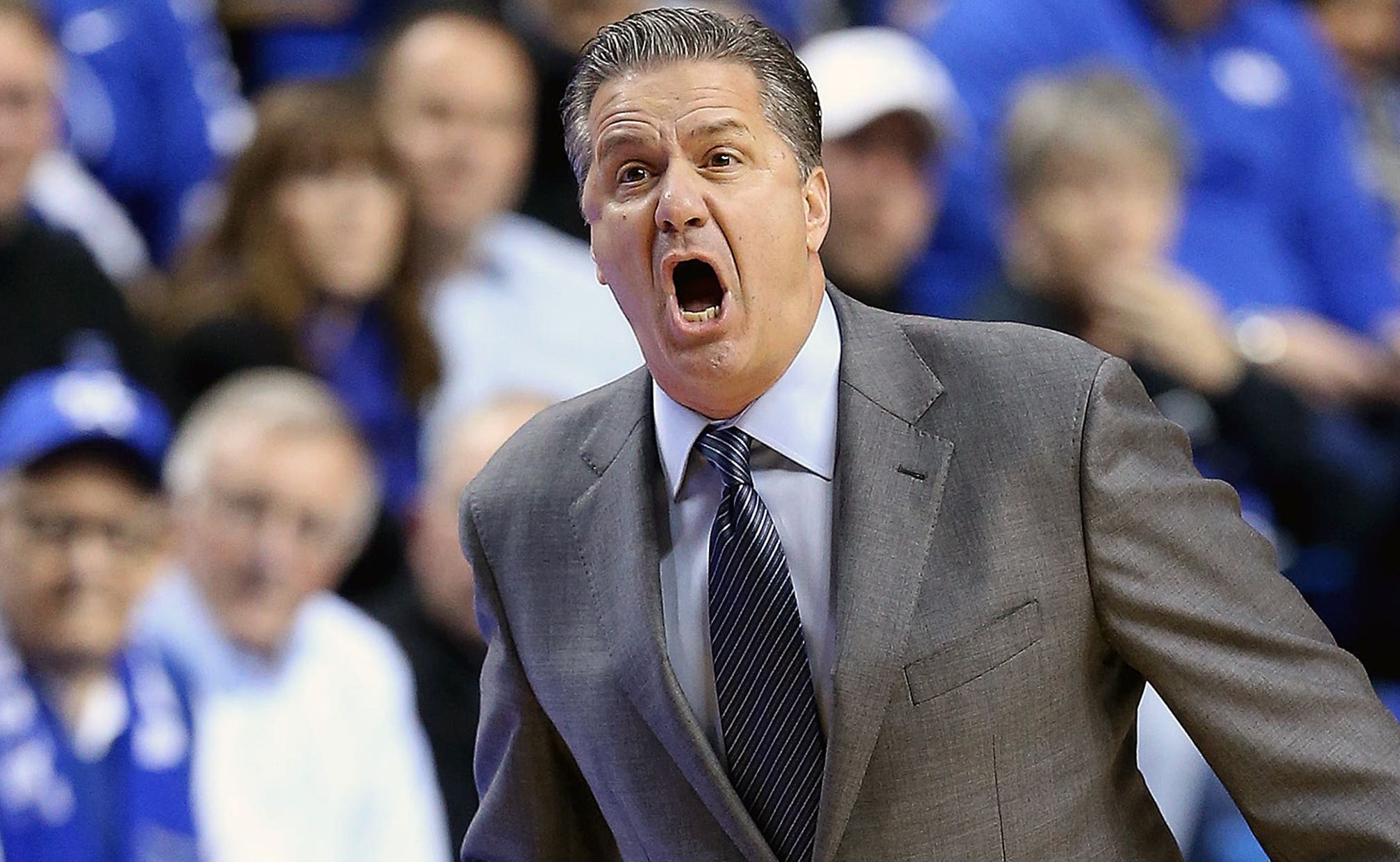 How in the world did John Calipari not win Coach of the Year? 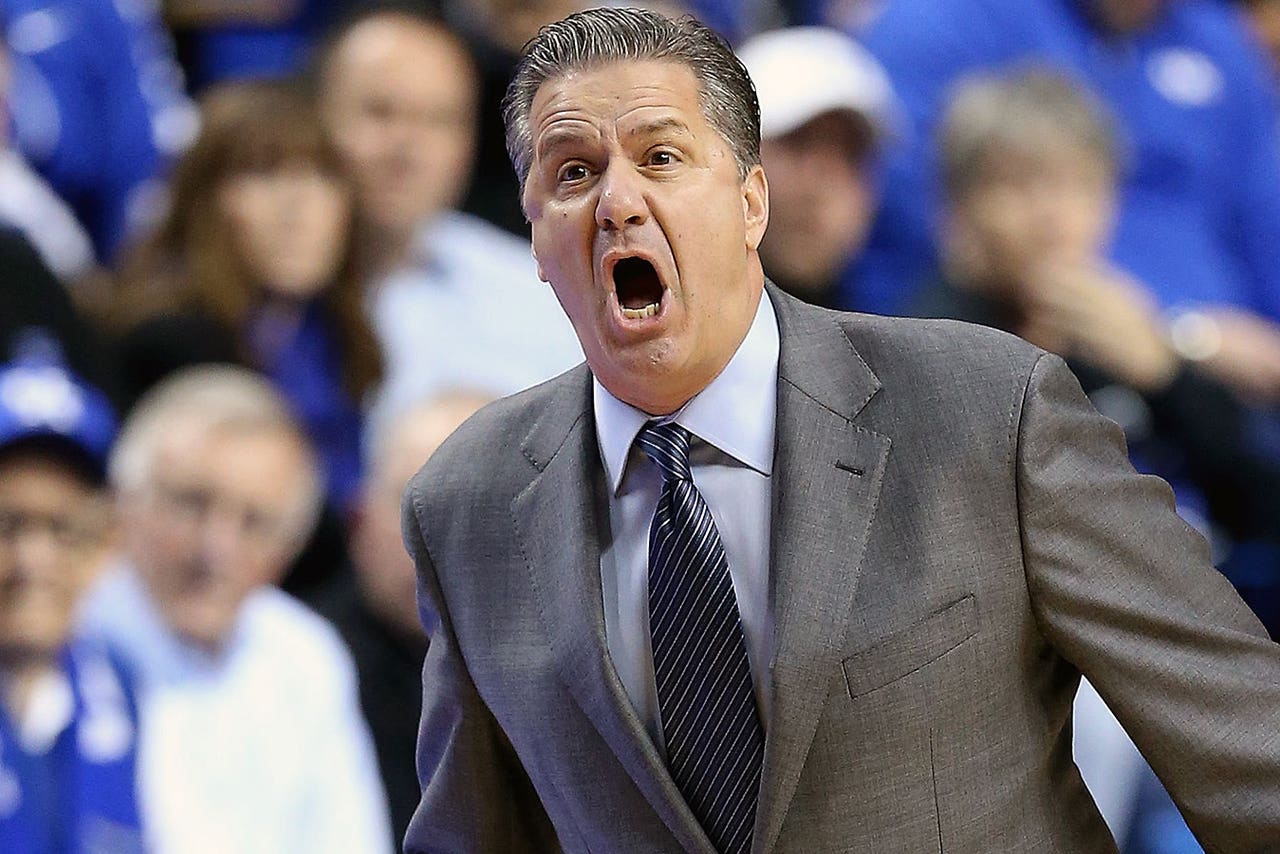 With the NCAA tournament now down to 16 teams, Monday was supposed to provide college hoops fans a little bit of down time. A little time to sit back, watch some "House of Cards" re-runs, do some laundry, maybe get to the gym ... you know, basically start functioning like a normal human being again. Instead of one who sits on the couch for 14 hours a day watching college hoops, while nacho crumbs collect on your T-shirt.

Again, it was supposed to be a quiet day in college hoops. At least until the U.S. Basketball Writers Association named their National Coach of the Year. And when they did, it wasn't about who won it, but instead, who didn't.

John Calipari did not take home the award, which is a bit surprising because, well, he's actually having a pretty nice little season. For those of you who've been living under a rock for the last six months, here are some quick points on just what Calipari has done this year:

1. He led Kentucky to both regular season and conference tournament titles in the SEC.

2. He once again has the Wildcats in the Sweet 16.

3. And oh, by the way, he also HAS HIS TEAM UNDEFEATED!

But apparently while "being undefeated" sounds nice on paper, it doesn't do all that much for the members of the USBWA. They named Virginia's Tony Bennett their National Coach of the Year instead.

Which is cute, it really is. It's also a bit absurd.

Let me start by saying that I have nothing personal against Bennett. The guy is a good coach. A really good one. Whatever you think about his team and its style of play (like the rest of you, it's a little dry for my taste), what Bennett has done at Virginia is a borderline sports miracle. I can honestly tell you that I don't have one single memory of Virginia basketball before he arrived, yet there he is, leading the Cavaliers to back-to-back ACC regular season titles. The fact that he's done it during a time where the ACC has never been tougher is pretty darn impressive. He definitely had a really solid season as head coach.

(On a side note, it's also probably worth mentioning that in defense of the voters, there was no way they could have known that this award would come out the day after Virginia was eliminated from the NCAA tournament. At the same time, they did probably have a pretty good idea that Kentucky might still be in the tournament, and likely undefeated, when the award was announced too. Just sayin'.)

Really though, this isn't so much about Bennett receiving the award, as Calipari not receiving it. Frankly, I'm still trying to figure out what Calipari did wrong, and what he could've done differently to impress the voters.

The most logical reason he didn't get the award is probably because of the time-tested logic that "he's got the best players -- of course he's supposed to win." Which, again, is cute. It's also about as outdated as saying "MySpace is my favorite social media platform."

For starters, yes, Calipari has better players than everyone else. But you know who else tries to recruit the best players? Everyone. Like, every single coach in America.

Recruiting is the lifeblood of college athletics, not just in basketball, but in all sports. Nick Saban and Urban Meyer -- the two guys who everyone agrees are the two best coaches in college football -- have each said that recruiting is the single most important part of running a successful football program. Well if those guys are saying it, who are we to disagree? And why should Calipari be punished for it?

To mention that by punishing him for it, you're refusing to acknowledge everything he does with those highly-rated recruits once they get to campus. Because I've got to ask, what qualifies as being a great "coach" more than getting a bunch of individual superstars to play like a team? Not much that I can think of.

As a matter of fact, I would argue that Calipari is doing one of the single best "coaching" jobs of any coach, in any sport, in recent memory this season. Kentucky has nine McDonald's All-Americans, which means they have nine players who are used to pretty much doing whatever they wanted, whenever they wanted, before they got to Kentucky. They were all basically the best player on every team they've ever played for -- well, except for the Harrison twins, you know, because there are two of them -- and all also probably played the most minutes, scored the most points and received the most accolades, too.

According to some nifty Google research I just did, the Wildcats don't have a single player who averages more than 11 points per game, or anyone who plays more than 25 minutes game. Yet to his credit, Calipari has those guys playing like a team. As best I can tell, not a single one of those players has complained about lack of minutes or touches the entire season. At least not publicly.

If that's not the definition of good "coaching," I don't know what is.

Again, I like Bennett and have no personal vendetta against him. But the reason he won this award is because he checks all the boxes of what every old school media member believes a "coach" is. Virginia plays "hard." They give it the old college try. Bennett recruits players who will be in college for three or four years (if only because they're not good enough to go pro). And Bennett himself is quiet and keeps his mouth shut. Honestly, what's the most interesting thing Tony Bennett has ever said?

Wait, has he ever said anything, ever? I can't remember a single time I've seen him interviewed.

At the same time, Kentucky appears to be the opposite.

Sure they're really talented, and sure they're good kids (Karl Anthony Towns is a 4.0 student who wants to be a doctor), but something just seems off about them ... even if opponents go out of their way to say how nice they are. They don't fit the part. They aren't what every media member wants them to be (even if they are what every media member wants them to be). And Calipari? Well, he's never been one to bite his tongue or keep his mouth shut when he disagrees on just about anything.

Which is why he will never win any of these awards.

The more I think about it, the more you know what this reminds me of? How TV, movie and music awards work. The Oscars, Grammy's, whatever, are never actually about who has the best movie or best album, and they're certainly not about who is most influential, or who actually puts out the most consumable product.

You can't, it's never happened.

Yet, off the top of your head, do you know how many Oscars Ferrell has won? The answer is obviously zero. The reason being that the people who vote for these awards would rather give it to what fits their "narrative" of what a good movie should be. Usually that movie is something that half the public has never heard of and three quarters of the public has never seen, starring a bunch of actors nobody cares about.

It's the same in music.

I know a lot of you don't like Pitbull, but I'm going to go ahead and throw out an unpopular opinion: I love the guy. Judge me if you want, but at the same time, let me ask you a question: When was the last time you heard a Pitbull song on the radio and didn't immediately start bopping your head, start shaking your hips a little and immediately think to yourself, "Man, I need to plan a vacation to South Beach, ASAP!"

Again, you might not like Pitbull, but can you think of a single more influential artist on the planet right now? The guy sells out stadiums every damn night, collaborates with just about every musician on the planet (I half expect him to drop a new album with Frank Sinatra next week), and is basically everywhere. Crap, the guy played halftime of the Cowboys-Eagles game on Thanksgiving and hosted the Latin Grammy's in the same week.

Well, you know how many Grammy's he's won? Zero.

The question, of course, becomes whether he cares or not. I don't know Pitbull personally, so it's hard for me to answer. But he probably shouldn't. Again, he's one of the most influential artists on the planet and is hip-thrusting all the way to the bank. Dale!

It's the same with Ferrell in movies and Calipari in basketball. Well maybe not hip-thrusting, but you get the point.

Anyone who knows basketball knows that Calipari is the best coach with the best team and the best players in college basketball this season. His team matters the most, and he's also the most influential as well.

So, ultimately, who cares if the media didn't give him this stupid award?

We all know who the best coach in college basketball was this season.

Aaron Torres is a contributor to Outkick the Coverage and FOXSports.com. Follow him on Twitter @Aaron_Torres, or e-mail at ATorres00@gmail.com.