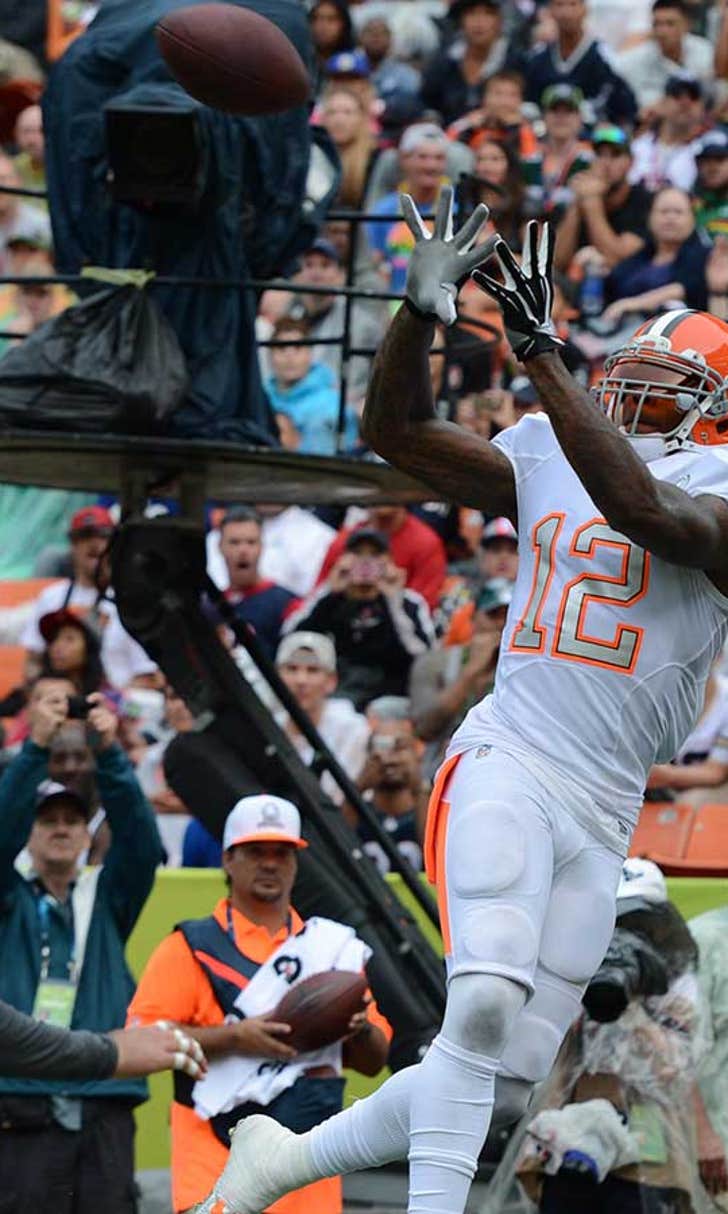 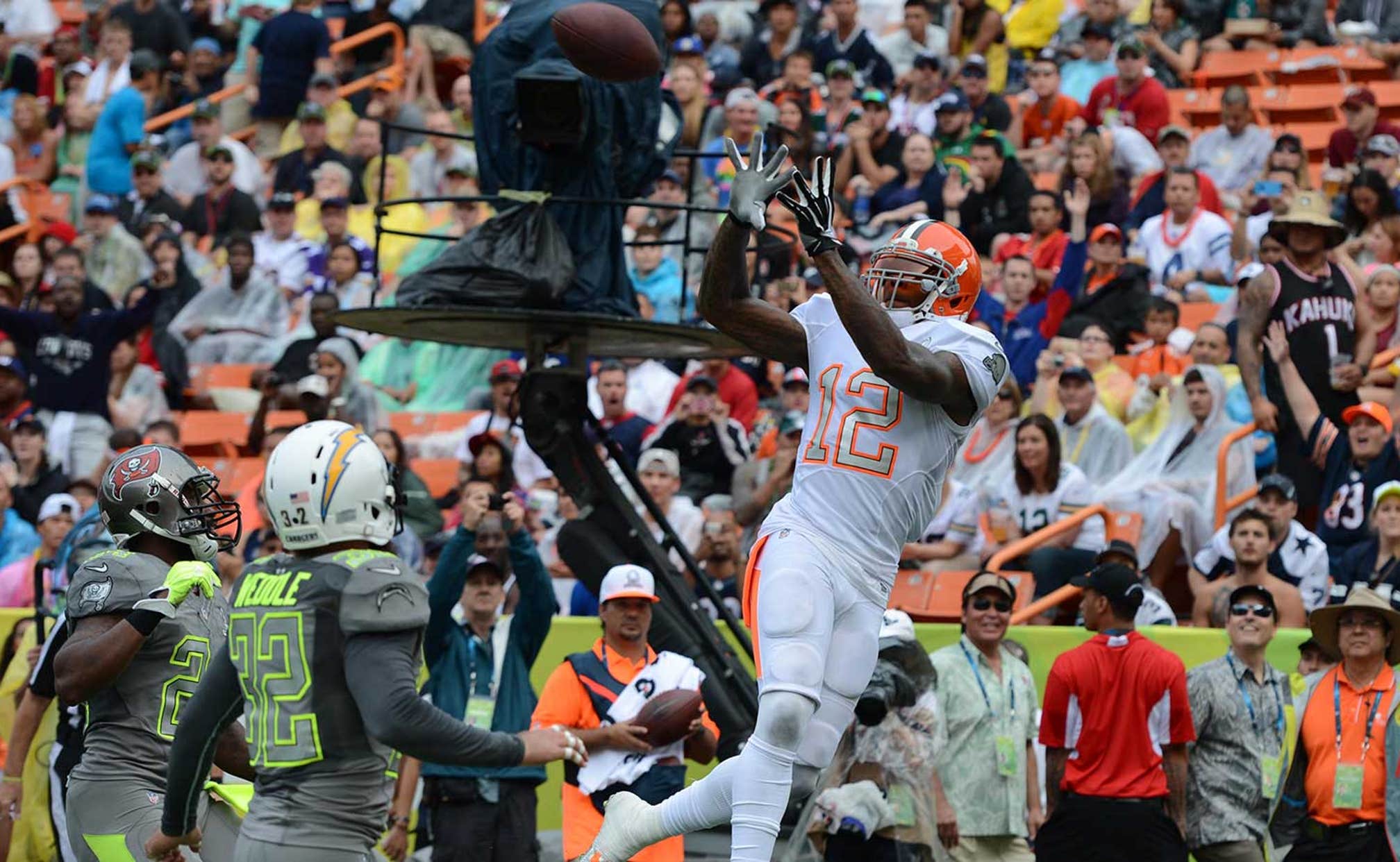 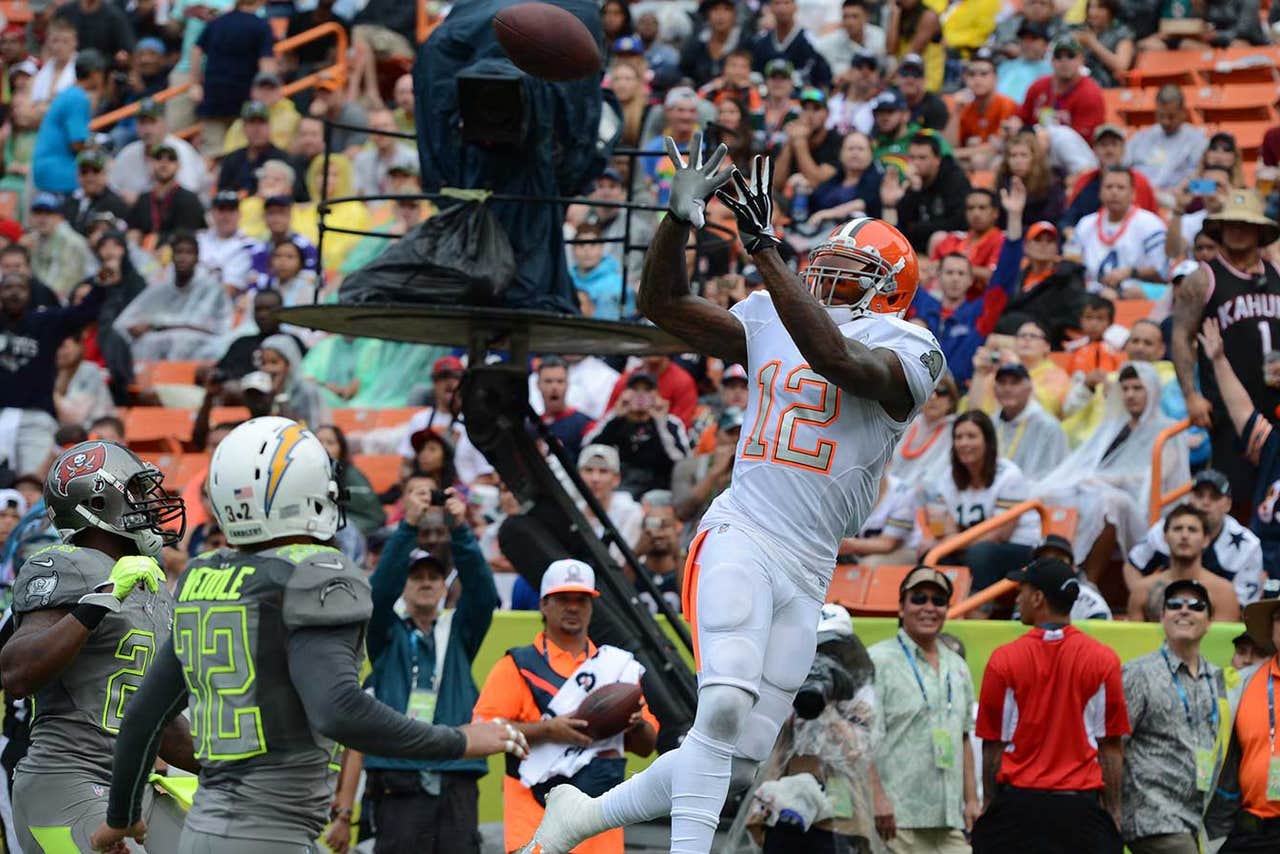 HONOLULU (AP) -- Jerry Rice has fresh bragging rights on Deion Sanders nearly a decade after both players retired from the NFL.

Dallas running back DeMarco Murray caught a 20-yard touchdown pass with 41 seconds left and Carolina running back Mike Tolbert plunged into the end zone for a 2-point conversion to give Rice a win over Sanders in the first schoolyard-style Pro Bowl on Sunday.

Baltimore's Justin Tucker missed a 67-yard field goal on the game's final play after missing a 66-yarder earlier in the game.

The touchdown and conversion gave Rice a comeback after Philadelphia quarterback Nick Foles threw a 12-yard touchdown to Cleveland tight end Jordan Cameron with less than 5 minutes to play to give Sanders a 21-14 lead. 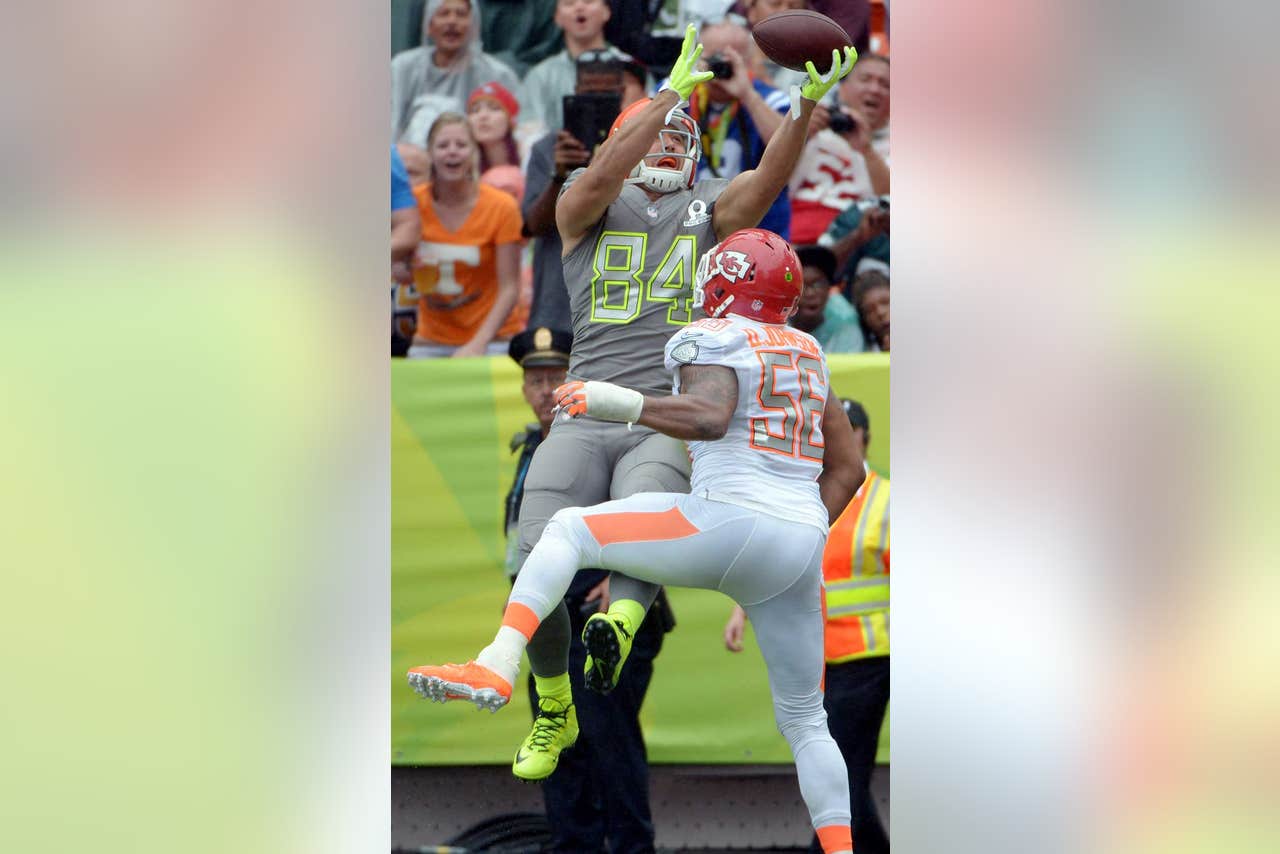 BROWNS SHINE IN PRO BOWL
The six Browns that went to Hawaii played well accounting for nine receptions and two touchdowns on offense, and an interception on defense. READ MORE

The touchdowns by Cameron and Murray were the only scores of the second half in a game that had eight turnovers -- including six interceptions -- and nine sacks.

"It was definitely sloppy. There was a lot of turnovers because of the weather," said Houston defensive end J.J. Watt, who was a captain on Sanders' team. "There was a lot of rain, so obviously that factored into it."

The game was played in consistent rain, but little wind and warm temperatures in the high 70s.

Foles was the only quarterback of six in the game to not throw an interception. He was named offensive MVP, finishing with seven completions for 89 yards.

The Pro Bowlers were split up by the NFL greats in a new draft format meant to improve the game. The picks made earlier in the week created matchups that pitted usual teammates against each other and challenged Rice and Sanders to compare the all-stars against one another. That led to plenty of trash talk between Rice and Sanders and some bruised egos among players used to being on top of their sport.

The result Sunday was a game that appeared more competitive than in years past, with some big hits -- even between teammates -- and fewer shenanigans.

"It was crazy, but we had fun with it," Gordon said. "I loved it and enjoyed it."

Gordon was flipped by teammate T.J. Ward on one of the biggest hits in the game.

"I don't think he knew what he was doing but I'll give him the benefit of a doubt on that one," Gordon said. "I'll get him back in Cleveland."

Jackson caught the game's first touchdown pass from Indianapolis quarterback Andrew Luck. Luck threw the ball 36 yards into double coverage in the end zone on a flea flicker, where Jackson wrestled it away from Titans cornerback Alterraun Verner. 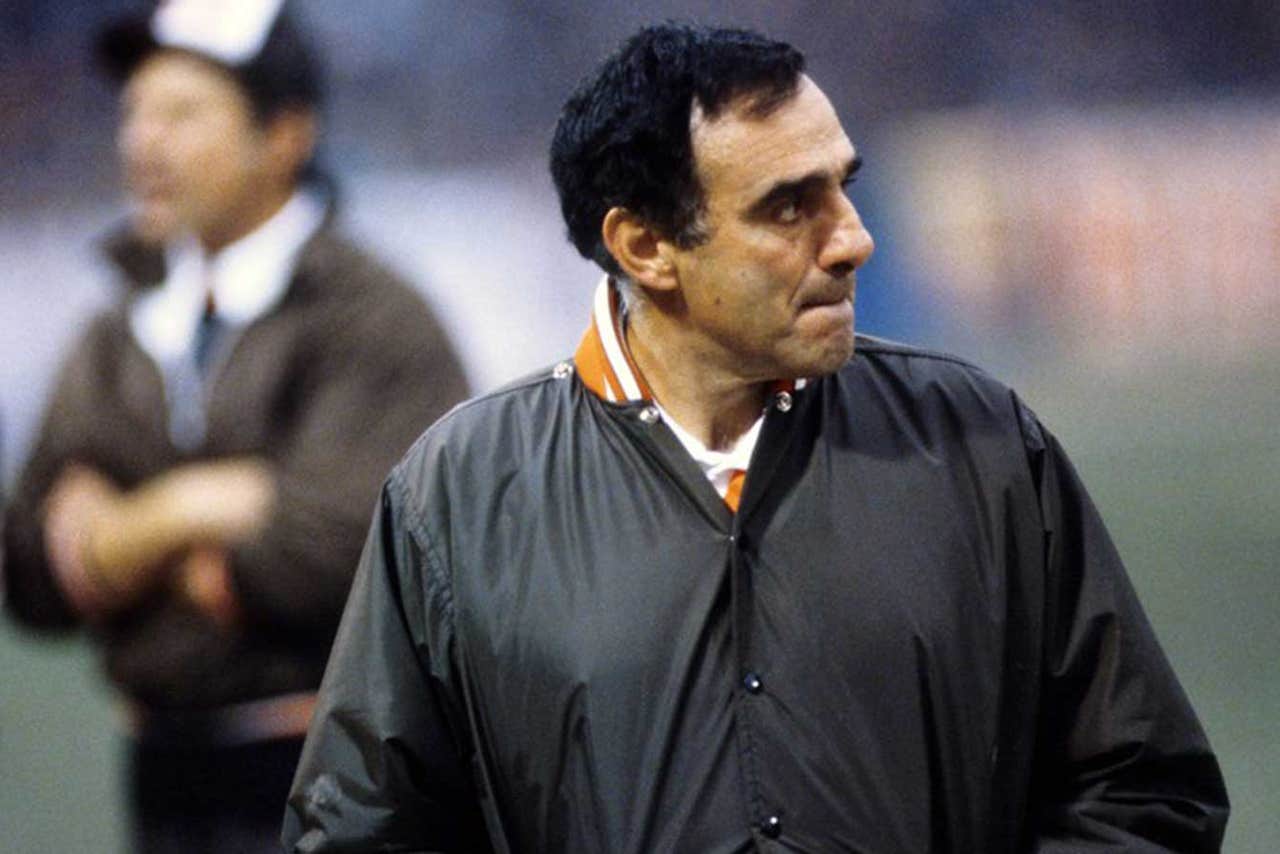 BROWNS COACHES THROUGH THE YEARS
In honor of the Cleveland Browns hiring Mike Pettine as the 15th full-time head coach in franchise history, we take a look back at each one that came before him. Check out the PHOTO GALLERY

Newton scored on 1-yard run up the middle for a touchdown, making up for an earlier interception on a ball Cleveland cornerback Joe Haden wrestled away from Jackson.

Kansas City linebacker Derrick Johnson -- who had a big hit in the first half on Chiefs teammate Jamaal Charles -- was selected as the game's defensive MVP for Team Rice.

"I didn't expect it, but he's out there doing his thing," said Charles, who was knocked out of Kansas City's playoff loss to Indianapolis with a concussion. "I can't get mad at him -- it's just about football and you've just got to be ready."

"If you stand back, he's going to make you look pretty bad, so I had to go out and really give it to him," Johnson said. "I would never try to hurt my teammate at all, but compete a little bit."