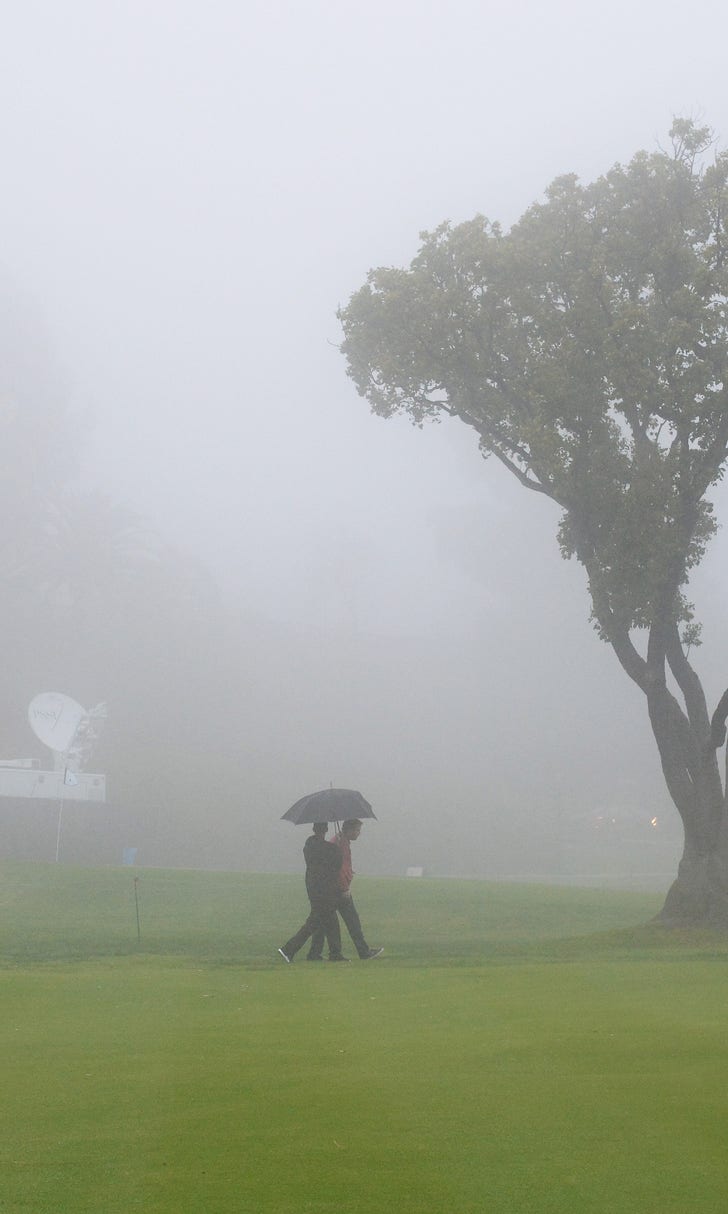 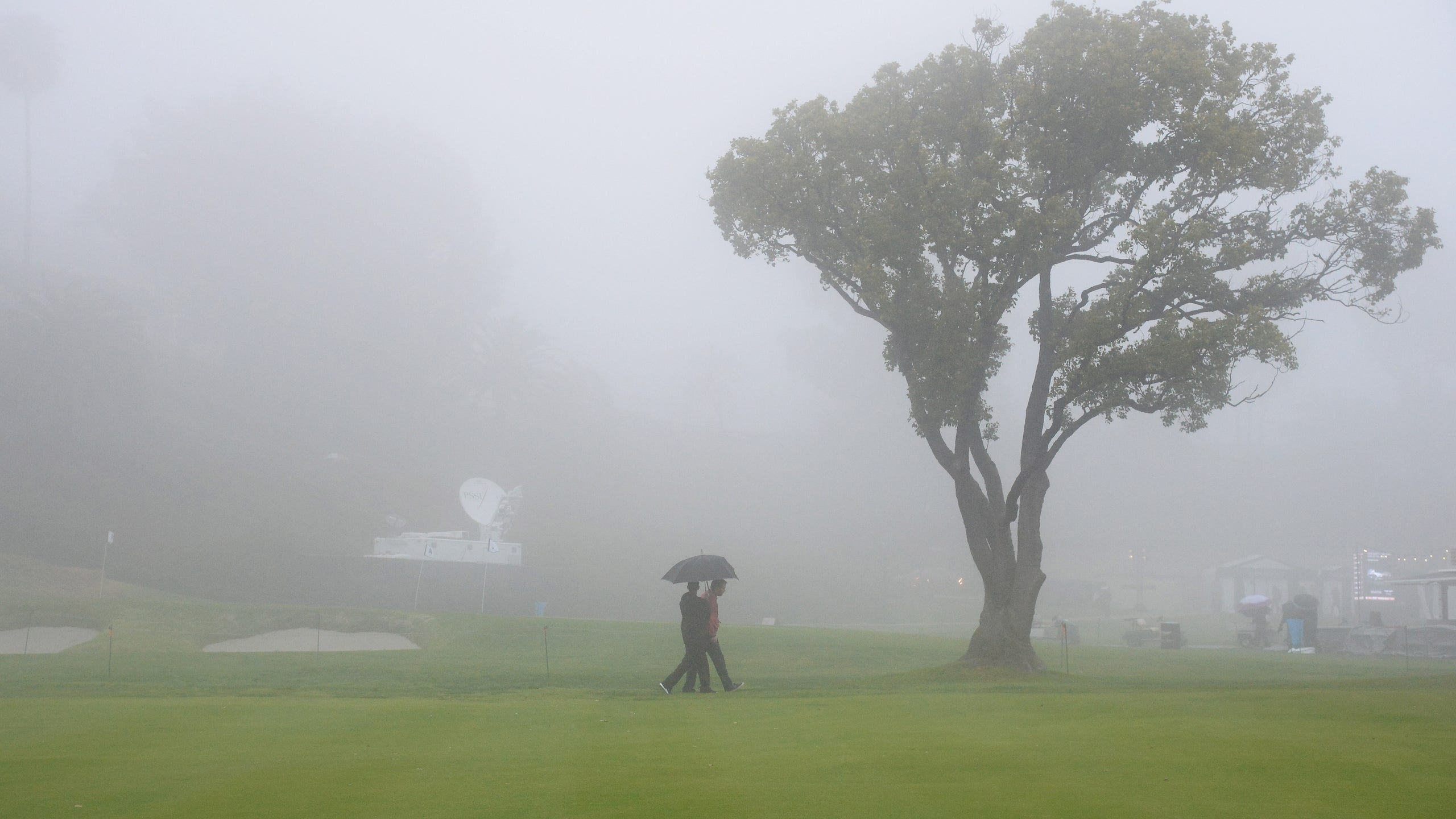 LOS ANGELES (AP) — One of the wildest pars Phil Mickelson ever made didn't even count. Neither did one of the worst lies Jordan Spieth ever had.

Fifty minutes into the start of the Genesis Open, with only 30 players having teed off, the opening round was scrapped because of increasing rain that soaked Riviera and poor visibility that made it unusually tough on the earliest of starters.

Everyone started over after what amounted to a seven-hour delay, and Spieth made the most of his second chance.

He chipped in twice for birdie, made birdie on all three par 5s and was at 5-under par through 12 holes. He was tied for the lead with Sung Kang, who was through 14 holes.

Tiger Woods never made it to the course. He was to play in the afternoon and faces a long day of as many holes as he can get in Friday in what now becomes a long, disjointed week trying to catch up.

None was bigger than the decision to restart the round. Spieth hit his tee shot on the short par-4 10th to the left, normally a good place to be except that his ball hit the cart path, hit it again, bounded across the forward tee at No. 11 and disappeared into shin-high grass so deep he could barely see his ball.

If he could have played from there, par would have been a challenge. And then the horn blew to suspend play because of wet conditions, and a few hours later, the PGA Tour thought it was best to scrap the round.

It was the first time in more than five years on the PGA Tour that a round started over.

The was great news to Spieth, who hit his tee shot left of the green near a tree, pitched to 15 feet and walked away with par.

"Given I went cart path to cart path to junk on the first start today ... went from kind of being unfortunate to just fortunate," he said.

He was playing alongside Mickelson, who hit his first tee shot on No. 10 into a bunker, a bad spot in any weather. Mickelson apparently could see just fine, so while Spieth and Xander Schauffele marked their balls, Mickelson chose to finish the hole.

He went over the green into a back bunker, the ball slightly plugged in wet sand. Unable to control the spin, he blasted out to the green and watched it roll into a front bunker. With his fourth shot, the ball appeared to be going fast enough to return to the back bunker, instead the hole got in the way. It disappeared for a par, and Mickelson walked back to his caddie with a smile and said, "How about we go in now?"

When he returned, Mickelson hit a beautiful flop shot from long and left of the green to 18 feet, and his birdie attempt turned away at the cup. He tapped in for another par, this one far less entertaining.

"Same score," Mickelson said as he walked off the green. "Whatever."

Spieth reached the edge of the green on the par-5 11th and took two putts for birdie. From right of the green at No. 12, the toughest hole at Riviera, he hit a lofted chip that rolled dead into the cup for another birdie.

Spieth picked up two more birdies on the par-5 11th and par-5 first hole, and then when he came up short of the green at No. 2, another cheer rang out on the hill as he chipped in again.

Kang chipped in for eagle on the 11th hole and kept it in play on the tough par 4s.

Jimmy Walker (10 holes) and Patrick Rodgers (13 holes) were at 4 under. Mickelson, coming off a birdie Monday in his victory at Pebble Beach, had yet to make a birdie and was 1 over through 12 holes.

Rain was one problem. The PGA Tour was equally concerned about visibility. The starting time at Riviera was at 6:40 a.m. because it has a 144-man field and limited daylight this time of the year. But with thick clouds that brought the rain, it made the sky even darker and players had trouble even seeing their shots.

"We don't do that very often," said Mark Russell, the tour's vice president of rules and competition. "But if I had it do over again, we would have delayed the starting times."

Scores last were reset in 2013 at the Deutsche Bank Championship outside Boston after an hour of play because of heavy rain, and the same year at Kapalua because of wind so strong that balls wouldn't stay on the greens.