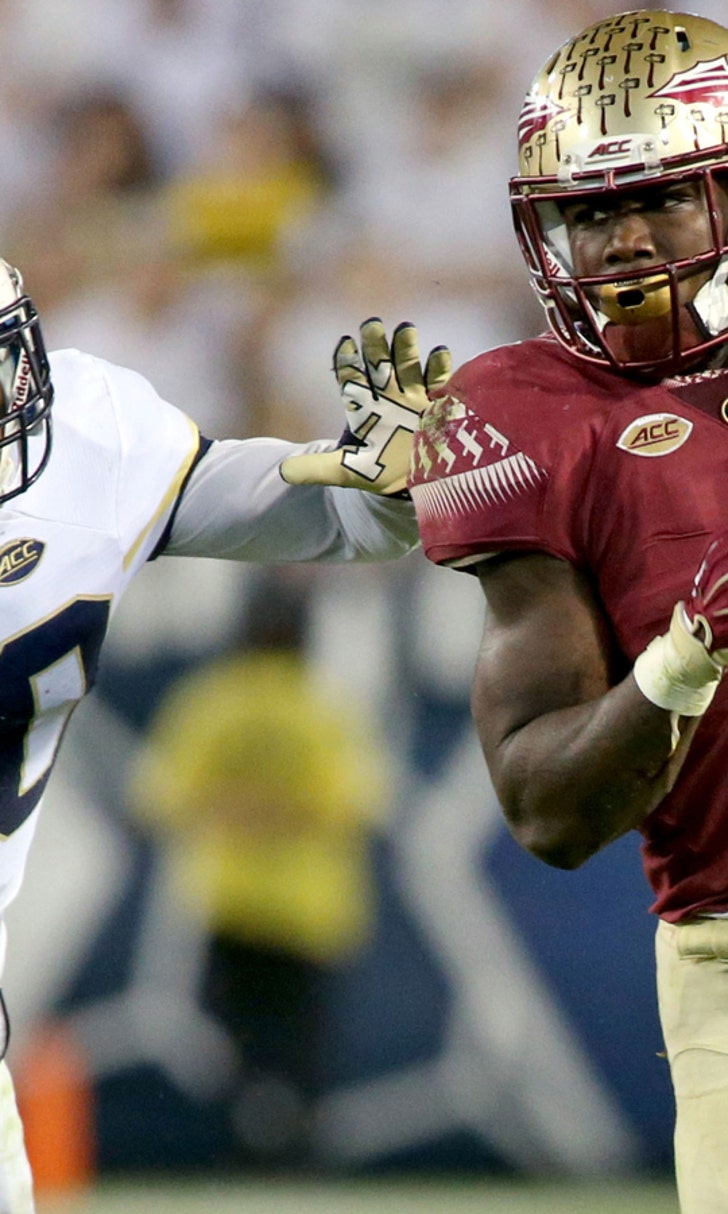 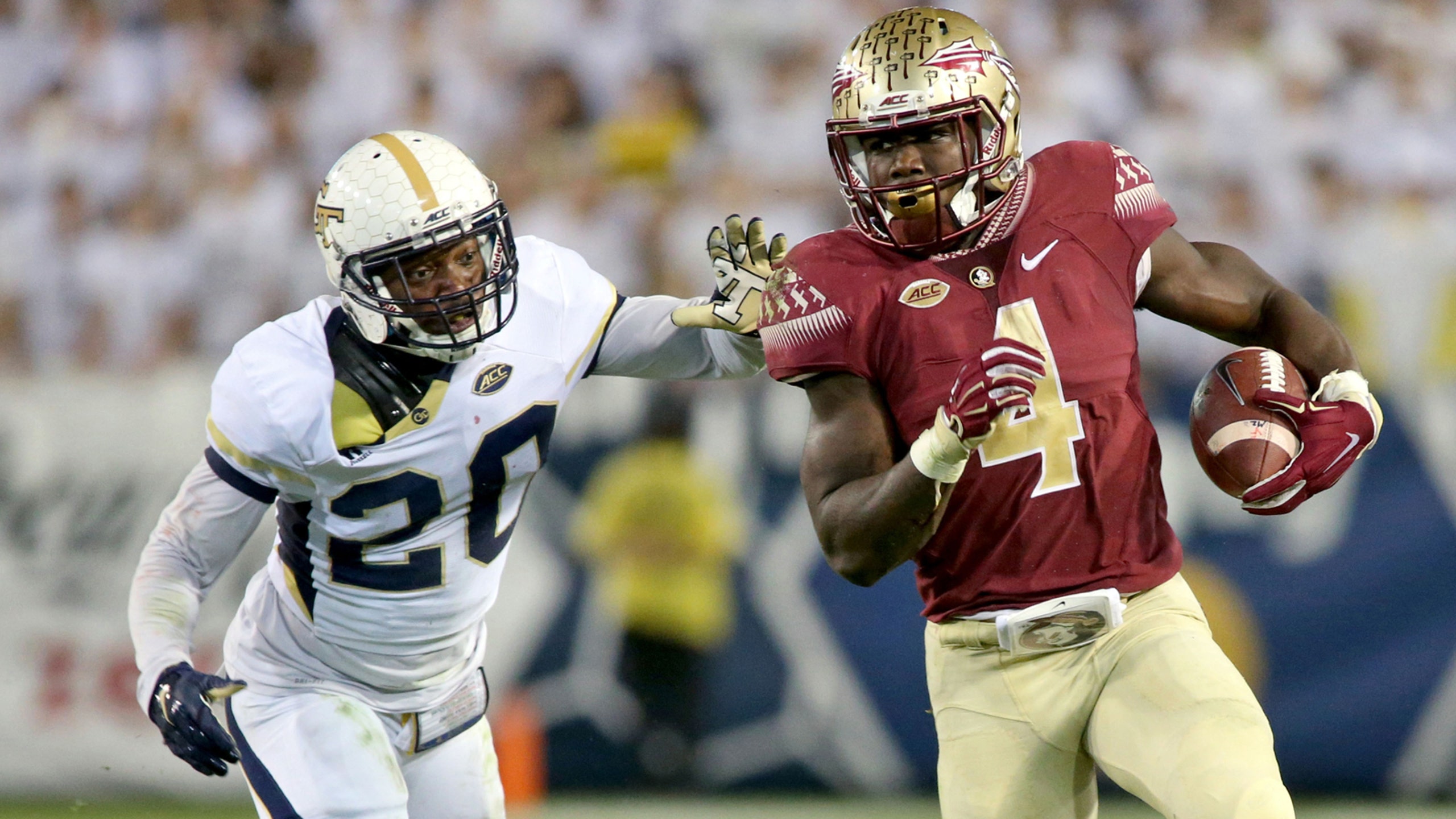 FSU running back Dalvin Cook out Saturday with ankle injury 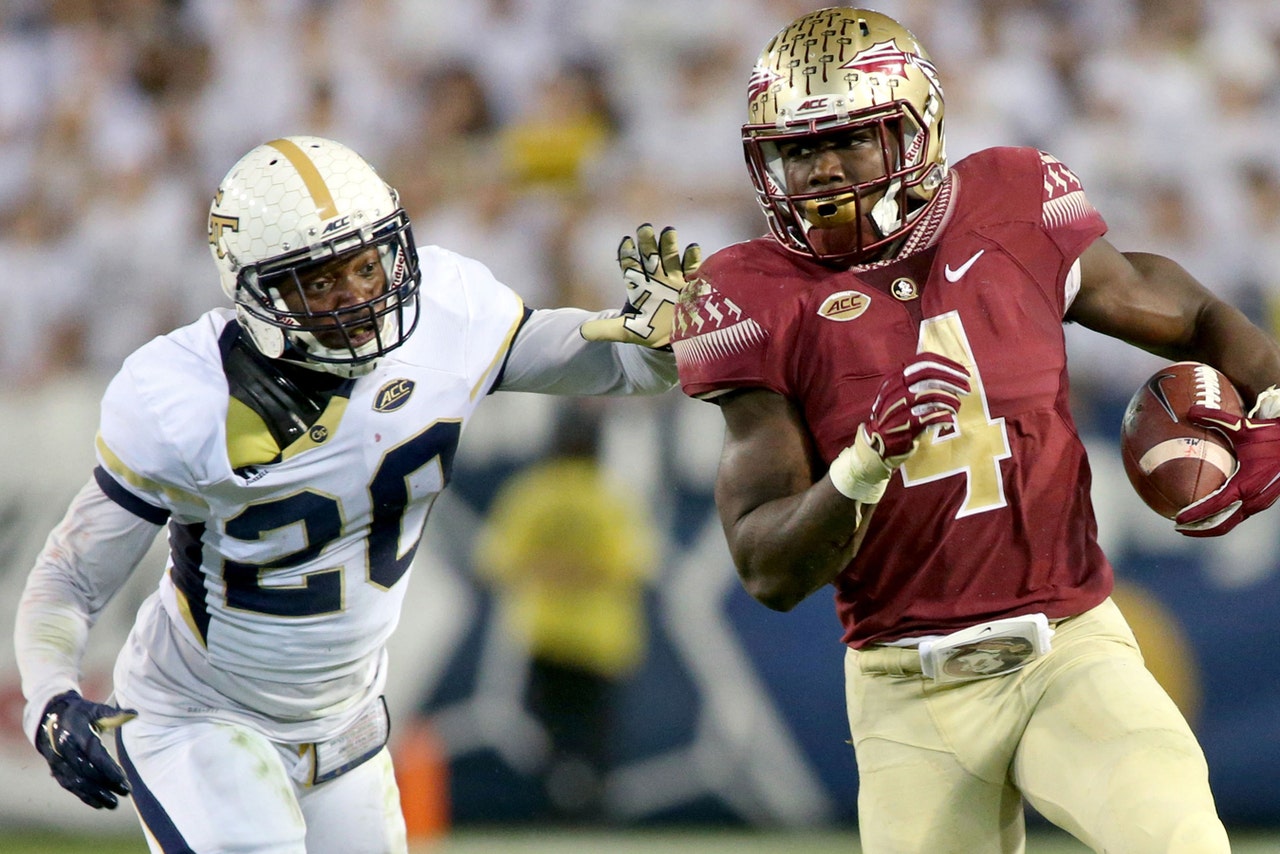 TALLAHASSEE, Fla. (AP) -- The rash of injuries at Florida State has caught up to the No. 17 Seminoles' top offensive player.

Dalvin Cook will sit out against Syracuse on Saturday because of a left ankle injury.

Second in the nation in rushing, Cook hasn't practiced all week and was wearing a brace on the ankle Thursday during the open portion practice. Coach Jimbo Fisher said after practice that Cook's injury occurred during last week in a 22-16 loss at Georgia Tech.

The sophomore, who is averaging 148.1 rushing yards per game, had been hampered by a hamstring injury that he suffered during the first quarter at Wake Forest on Oct. 4, but Fisher said that Cook's hamstring wasn't bothering him last week.

"Hopefully, he will be able to go by next week," Fisher said. "If he could go this week he would play. He said his hamstring feels great."

Cook is the first Florida State running back since Greg Allen in 1981 to have a pair of 200-yard games in the same season. Through seven games, Cook has 1,037 yards rushing with 11 touchdowns and is averaging 8.2 yards per carry.

Syracuse (3-4, 1-2 Atlantic Coast Conference) had been facing the prospect of facing the nation's top two rushers before Cook's injury. LSU's Leonard Fournette ran for 244 yards on 26 carries and two touchdowns in the Tigers' 34-24 win Sept. 26.

With Cook's injury, the Seminoles (6-1, 4-1) are thin at running back. Mario Pender, who began the season as Cook's backup, has been out since Sept. 22 because of a collapsed lung that occurred during practice.

Johnathan Vickers and Jacques Patrick are expected to get most of the carries. Vickers has 15 carries for 47 yards and a touchdown. Most of those carries came in the Wake Forest game when Cook didn't play the final three quarters due to a strained hamstring.

Patrick, who has played in just three games, has six carries for 12 yards. Fullback Freddie Stevenson could also see some carries.

"Jacques and Vickers are ready. This is about the time Dalvin and those guys (started to emerge) last year," Fisher said.

Florida State will be missing two other starters. Linebacker Terrance Smith will miss his fourth straight game due to a sprained ankle and right tackle Derrick Kelly (leg) is also out. Center Ryan Hoefeld is listed as questionable due to a shoulder injury but Fisher said he expects Hoefeld to play.