Defense is looking decimated and vulnerable

The Eagles offense rolled into town with an offense that was so battered and bruised that most people thought the Cowboys would be able to bounce back after a disappointment on Thanksgiving that was a major disaster.

But, the bounce back game never emerged.  The Cowboys were absolutely pounded on the ground by an offensive line made up primarily of reserves and a rookie running back who went undrafted after gaining 16 yards at Kansas State in 2011.

Clearly, the Cowboys defense is leaking oil badly.  They are beat up and undermanned, and after dragging the offense through the first 10 games of the year, it appears the final month is going to have to be because the offense has decided to return the favor.

The most disconcerting elements of the defense right now is right down the middle.  And when you see that Bryce Brown ran for nearly 170 yards and was only slowed down because Josh Brent stripped him in the 4th Quarter, you can definitely see what the opponents that have a running game will be emphasizing on the way in.  More specifically, the AFC North powers in Cincinnati and Pittsburgh are clearly going to ground and pound against a defensive front that is anything but stout right now after being filleted by Alfred Morris and Brown in consecutive weeks.

As we broke down the game film from the Philadelphia game, it sure looks like we see a trend that is emerging.  Most of Brown's bigger runs (and he had 3 of 20 yards or more.  3 after only giving up 7 all year long) were out of "11" personnel.  11 personnel is 3 wide receivers, and is countered by the Cowboys sitting in nickel defense.

For the Cowboys, that usually takes off one defensive lineman in exchange for a corner - in this case, Mike Jenkins.  So, the Cowboys defense is in a 2-4-5 defense, with 2 defensive lineman and all 4 linebackers are still on the field.  11 personnel clears bodies out of the box and makes running the football a bit easier to block.

So, the Cowboys put a lot of strain on the middle linebackers in this scenario - who because of injuries and more injuries are now Dan Connor and Ernie Sims - or even Kyle Wilber.  Anthony Spencer and DeMarcus Ware must stay on the flanks, and in the nickel, it has often been Marcus Spears and Jason Hatcher as the two down linemen with Ratliff unavailable. 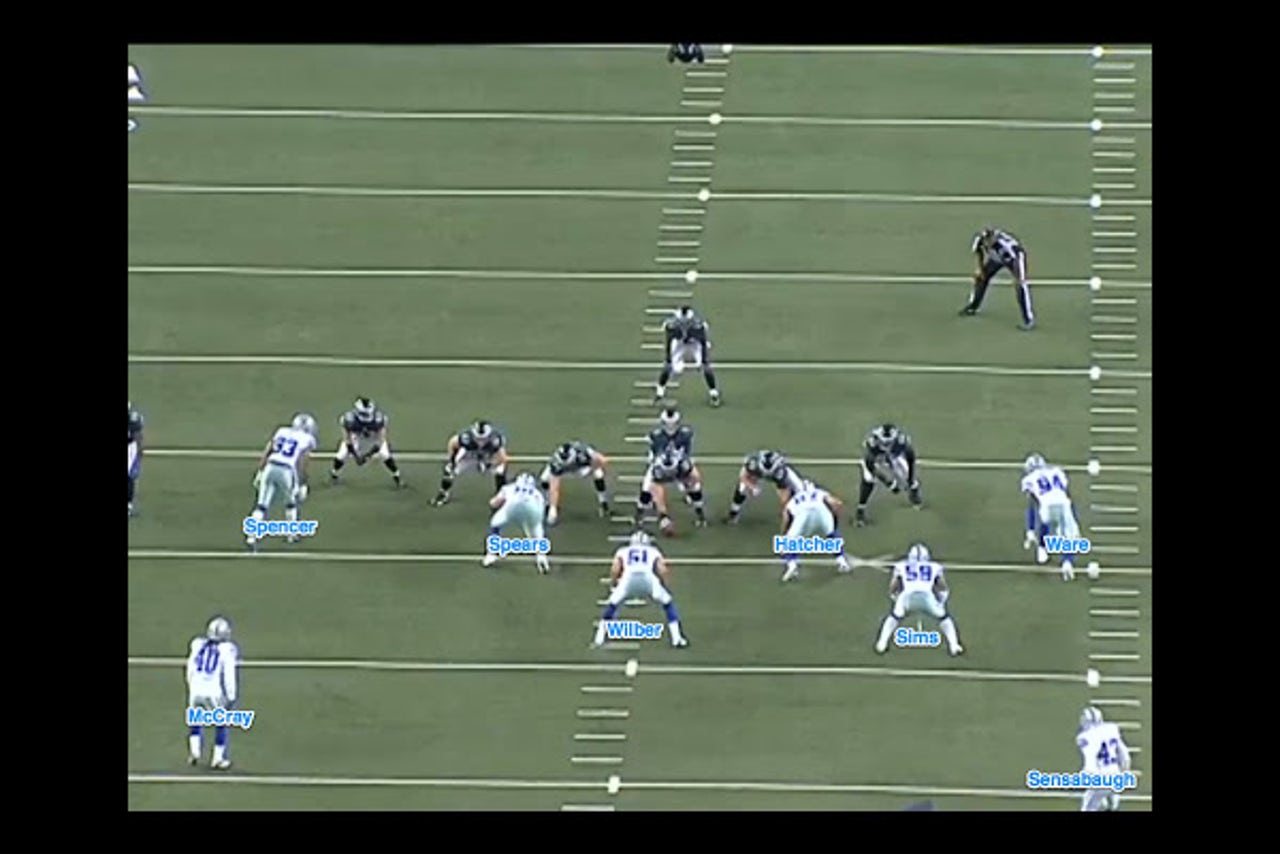 This group is way different from the idea of having Sean Lee and Bruce Carter patrolling the middle of the field and finding their run fits perfectly.  Also, Danny McCray has missed too many tackles and think about who your nickel corner is when Orlando Scandrick is down and you are asking Mike Jenkins to help support the run on the inside.  I can barely think of any Cowboys worse at tackling than Jenkins.

Put all of this together, and you can see why opponents should welcome this and play 11 personnel even on 1st down.  Make the Cowboys choose between Dan Connor in coverage or a better cover man like Wilber, but then make Wilber stop the run.  Make Mike Jenkins tackle.

If I am Cincinnati, I think about using 11 personnel all day, and make the Cowboys do something that they appear to be very poor at doing right now.  Stopping the run in their nickel defense.

Let's take a look at the "Splash Plays" from Week 12 versus the Eagles:

Splash Plays are key impact plays from the defense.  Usually, they are obvious, but there are some that blur the line.  I have listed time and play of each one for those who want to double check my work.

For more, read a detailed explanation of this study here:  What is a Splash Play?

Another big day for Anthony Spencer and Danny McCray did have a couple fine plays mixed in with some very poor ones, too.  Josh Brent only was credited with his strip, but he showed up on film quite a bit.  Jason Hatcher was awfully quiet and the team certainly continues to miss Jay Ratliff.

Also, the "is Mo Claiborne a legit ball hawk" conversation was given another piece of evidence as the rookie grabbed a fumble and took it back to the house.  Do that once and it might be a lucky play.  Do it several times in a season and find the ball when others cannot, and we search you for ball hawk DNA.

Here are the season totals through 12 games:

Way too many explosive plays conceded against an Eagles team that should not be able to get giant plays without their giant play players active.

Meanwhile, almost no pass rush results to speak of from the Cowboys who were on their heels quite a bit against a beat up offense.

And, here are the full season numbers to date:

The game by game pressure numbers:

Again, you can see the pressure numbers have dropped off the cliff since the injuries to Lee at Carolina and now with reserves all over the field, don't expect that to change.

The Cowboys defense has been decimated by injuries and they are now just trying to play preventive defense.  The issues should be exposed by a Bengals squad that has all of the man power necessary to stretch the Cowboys D all over the place.

I think we should all brace for a difficult day for stopping the versatile attack of the Bengals offense up there on Sunday.

This is going to be a rough test.