Cowboys win with plenty to clean up

Just get to the bus.

When you win ugly and to a certain extent as the
recipient of a far amount of good fortune (dare we say, luck) in the National
Football League, you do not wait around or apologize for the result.

You fully realize how rare and difficult wins are to
achieve, and therefore, when something unexpected and fortunate happens to you,
you try to hide your smiles, remember what you did to earn your victory as well
(because good fortune is never enough to win a game on it's own), and hurry to
the bus, lest anyone changes their mind about the generosity of the opponents,
the weather, or in this case, those officials who sometimes make a mistake or
two in your favor.

Such seemed to be the case in
Charlotte on Sunday when the Cowboys escaped the Panthers partly because of
some calls that favored Dallas late in the game and partly because Carolina
seems to have as many (or more) issues that they are dealing with as their
opponent did.

Nevertheless, given the finicky hand of
fate, the Cowboys lost a game in Baltimore that they should have won, and
perhaps won a game against Carolina that they were pretty fortunate to win.

And, aside from a few select teams in the NFL who do nothing but win
(Atlanta, Houston), and a few teams that do nothing but lose (Cleveland,
Jacksonville, and even, Carolina), this is the NFL right now.  It is a
league where as I write this, 21 of the 32 teams have either 3 or 4 losses.
They are neither in a good place on October 22, nor are they out of
the race.  They have handful of wins and a handful of losses.

None of these teams want to be in this spot, but when 66% of
your league is all in this similar position of having 3 or 4 losses so far, it
is tough to say that all the complaints about Dallas right now don't apply to
quite a few different teams.  Not expecting that to make anyone feel
better, but rather, just to understand that the issues are not uncommon and
league-wide.

Yesterday, the Cowboys fell victim again
to red zone inefficiency.  When your offense is struggling to amass
yardage, and yesterday with just 312 yards, that would apply, then you have to
be able to come away with 7 points when the chance arises.  But, in
each of the 3 opportunities for Dallas, they left with 3 points, instead of 7.
That puts them at 42% (8 for 19) for red zone scoring efficiency.
53% is the league average, with a few teams above 70% (Green Bay and
New Orleans).  Dallas finds itself surrounded by other stunning
offenses like Cleveland and St Louis.  If just one of those field
goals is a touchdown, the Cowboys are not scratching and clawing, while needing
a helping from Lady Luck to put this one in the one column.

This may speak to execution, but it may also speak to more on the topic
of Jason Garrett's aversion to risk.  Down 14-13, with under 4 minutes
to play, the Cowboys find themselves at the Carolina 15.  On 2nd Down,
Tony Romo puts a pass right on Dez Bryant's hands in the end zone.
Bryant cannot come up with what would have been a nice catch, but
rather petitions the officials (again) for a flag he will not get.  So,
the Cowboys face 3rd and 9, which is when Garrett does not allow for another
shot at the end zone where it will force Carolina to also score a Touchdown or
lose.  Rather, he calls a very safe middle run that ends the drive's
TD prospects, and settles for a 16-14 lead that hangs by a thread.


On the ensuing drive, the Cowboys front is doing a nice job of
getting pressure as finally getting Jay Ratliff and Anthony Spencer to join
DeMarcus Ware and Jason Hatcher is looking to have some positive results.
But, with a 4th and 2 coming, the Cowboys fall back into their bad
habit of not being lined up with the proper 11 players in a timely fashion, and
it almost beats them. 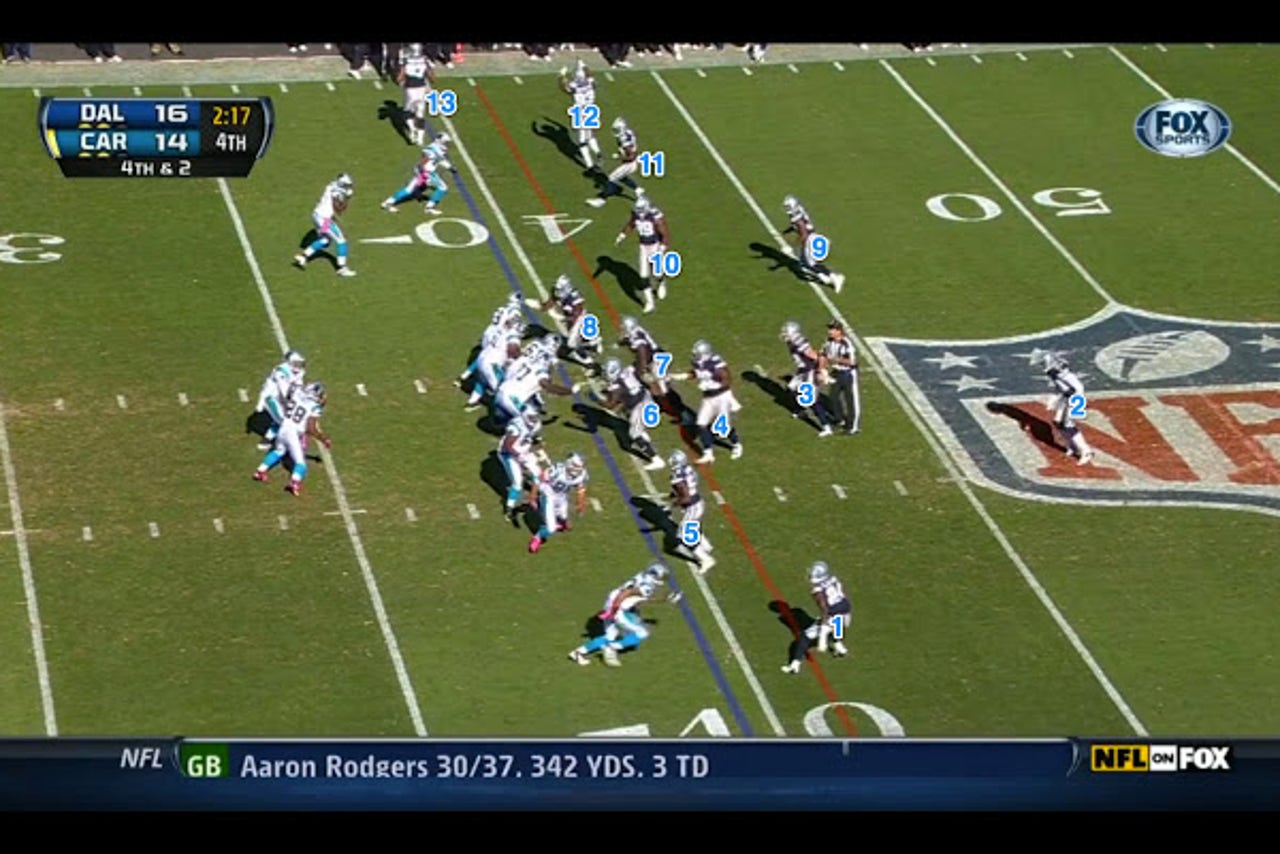 Luckily, this 13
man grouping was not flagged, instead they were granted the timeout that
Anthony Spencer is trying to call as he runs to the sideline.  Very fortunate, given that the Panthers were
already into a play that they completed for a 1st Down, and that the league has
really been cracking down on "12 men" calls this season league-wide.

"They are extremely fortunate to have
gotten that timeout called" - Darryl Johnston, Fox


Then, on the very next play, the Panthers' claims for a pass
interference are ignored as Louis Murphy had Morris Claiborne on his back
before the ball arrived.  As any player will tell you, it is only a
penalty if the flag is thrown, but anyone watching it realizes the rookie
corner got away with a big one there, as well.  A new set of downs at
midfield, while only trailing by 2, would have set up Carolina in a pretty good
position with 2 minutes to play.

But, the Cowboys took
those 2 breaks and tried to kill the clock off with a few run plays.
However, facing a 2nd and 9, the Cowboys enjoyed yet another
beneficial ruling as James Anderson was called for a horse collar penalty he
didn't commit on Phillip Tanner.  This gave the Cowboys 15 yards and a
chance to kill off more precious moments in the final 2 minutes.


They kicked a Field Goal to go up 5, and then had more big moments
from their defensive front, including a sack by Anthony Spencer who played a
dominant game in his return.

We can talk about making
your own breaks and things of that nature, but sometimes you get a call and
sometimes you don't.  The Cowboys need to make no apologies for their
3rd win of the season, as they battled hard and overcame quite a few injuries
that required the next man up to perform.  But, this also won't go
straight to Canton as a masterpiece of football precision.

At 3-3, they are right in the heart of the toughest part of their
schedule.  Everyone knew this 4 road games-in-5 game stretch was going
to be a bear the second the schedule was released.  It was going to be
imperative that they weather this storm so that when they finish with 5 of
their final 7 at home, they would still be within striking distance.
And, as the Giants come calling next week, we can see a scenario
where they complete a season sweep against New York (if they can do something
that they have never done - beat the Giants in Arlington, Texas) and place
themselves right in the heart of the NFC East divisional race.


This is far from a flawless football team.  The penalties
are continuing to be prohibitive.  The self-inflicted errors and poor
decision making will certainly continue to take its toll at inopportune times.
Not only that, but the war of attrition is certainly being felt each
week as the Cowboys have lost Phil Costa for the foreseeable future, just as he
was beginning to earn a reputation as a quality center.  Other
injuries to players like Sean Lee seem less serious, but they are certainly
still felt when he must watch the crucial moments from the sideline.

But, let's us not forget in our self-loathing and angst that
this is the NFL - where every team has issues.  This is the NFC East -
where the Eagles just fired their defensive coordinator.  And every
team has issues that are frustrating and annoying and the worst thing ever.
In each port of call, there are media and fans claiming that
"this type of performance will never work against the Giants" or
"if this team thinks it can make the playoffs playing like this..."
That is the nature of the beast.  And it is what makes this game
intoxicating on every level for the entire autumn and winter.


This is where a small dose of perspective might actually be called
for.  The chances of finding a flawless team this time of year are not
very good.  Myopia makes you feel like the laughing stock of the
league, until you step back and check your opponent's situation.


Understand that there is only one opponent you play each week.
And that opponent has its own issues and baggage and self-loathing.
One look at Cam Newton in the post game press conference reveals the
piano of expectations that he is carrying around on his back.  And
when work broke this morning that they relieved their general manager of his
duties, it became apparent that Carolina has plenty of its own issues.
Just like Baltimore, Chicago, and Tampa Bay.

Like so many teams in the NFL, the Cowboys are going through the pains of
another season.  Odds are horrendously long that they will be the 1
team of the 32 to hold a Lombardi Trophy in New Orleans this year, because that
is simple math.

They could use more talent, more
health, better coaching, and better performances - like everyone else.

The league has never been
closer.  There are a few out front, a few way back, but the peloton in
the middle is jammed with flawed teams and doubting fan bases and has never
been bigger.

And you know something?  The
peloton of mediocrity in late October has produced a Super Bowl champion later
that winter about 4 of the last 7 years.

In no way
should you read this and draw the conclusion that I am saying that the Cowboys
are next on that list.  The only thing that list tells me is that
winning ugly games to stay in the mix is a reasonable means of survival during
the heart of the NFL season.

You certainly don't rest
on your laurels after another ugly victory.  There is much to work on
and clean up.  This is an unsustainable model for success right now,
with self-inflicted errors and mediocre execution.


But, in preparing for the Giants on Sunday afternoon in the biggest showdown
game since the last date with the Giants on opening night 7 weeks ago, apologizing
for a fortunate win in Charlotte should be nowhere on the list.


Just get on the bus and get back to Dallas.

And remember those pleasant gifts next time a call goes the other
direction.