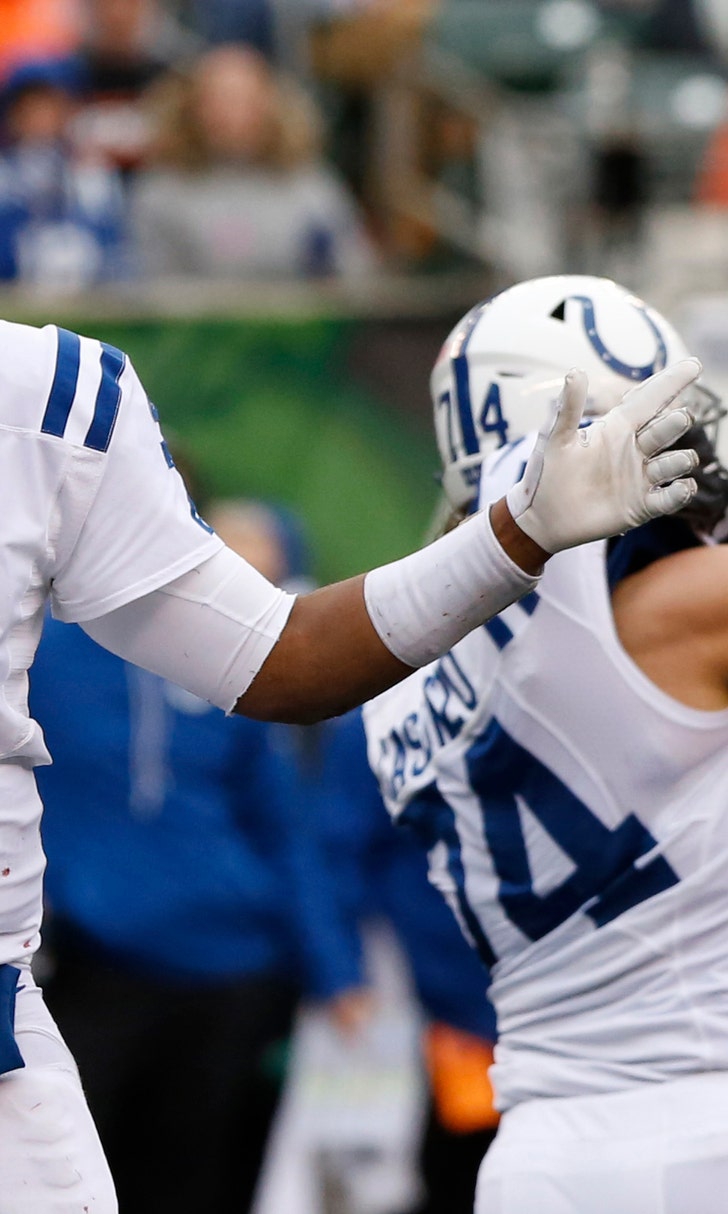 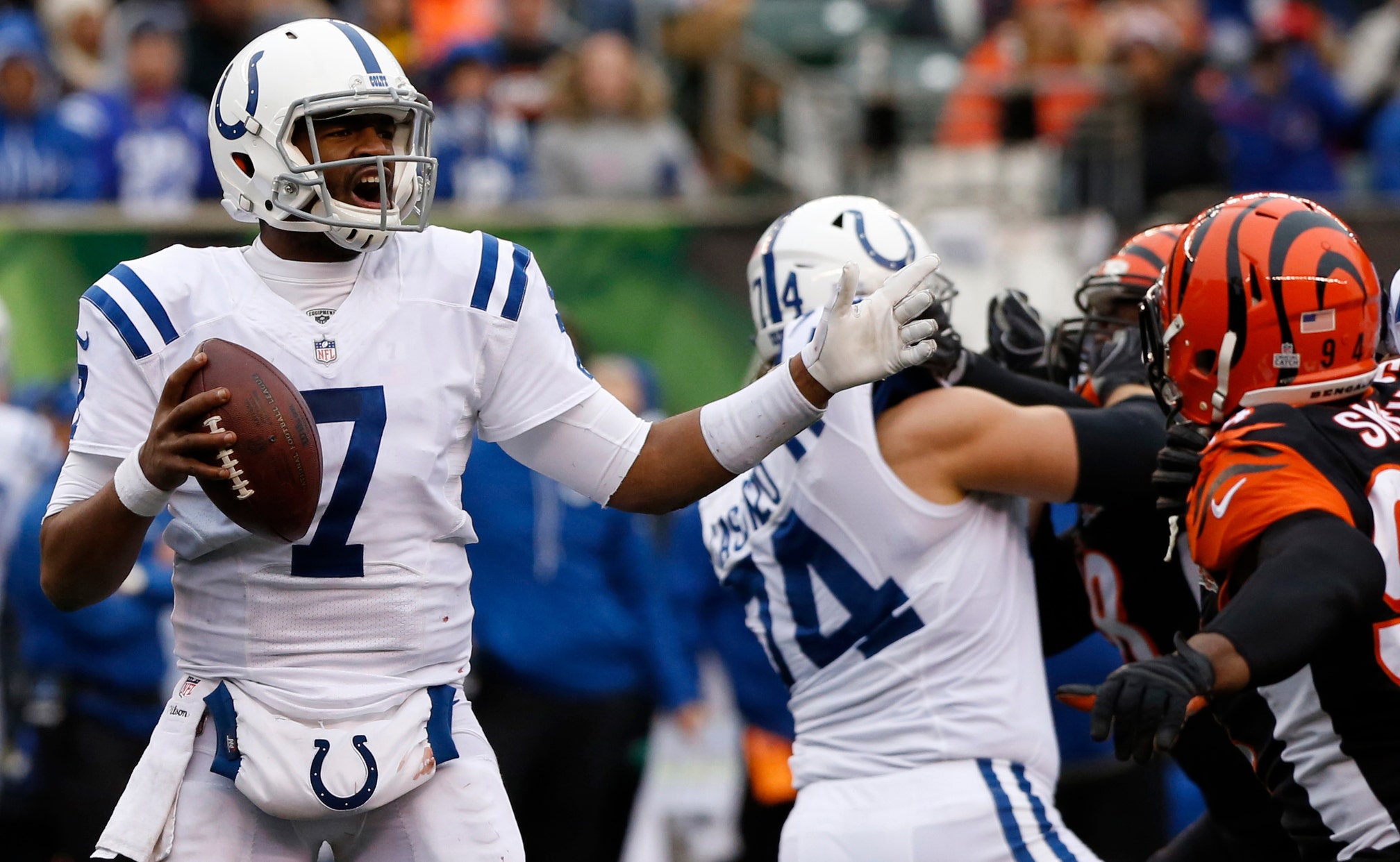 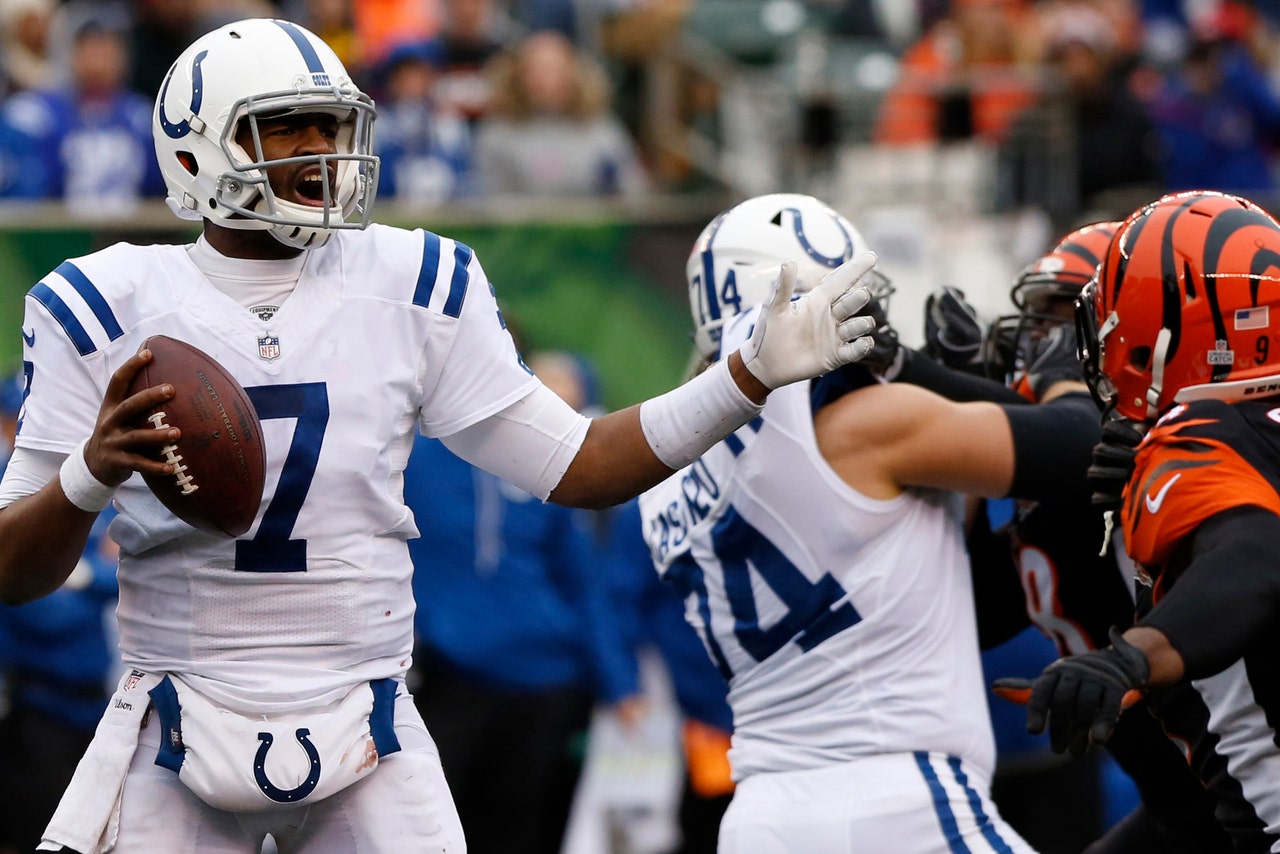 CINCINNATI -- Carlos Dunlap swatted Jacoby Brissett's pass into the air, looked and saw the ball floating right above him.

Could it be so easy to change a game?

The lineman snatched the ball out of the air, tucked it under his arm and ran 16 yards for a game-turning touchdown Sunday, rallying the Cincinnati Bengals to a 24-23 victory over the Indianapolis Colts in a game neither team could afford to lose.

Dunlap's uncanny ability to get his hands on passes made the difference. The defensive end excels at swatting away passes -- he led NFL linemen last season -- and changed the game with his third career score.

"The longest time was waiting for the ball to come down," the two-time Pro Bowl lineman end said. "The 16 yards went pretty quick."

For most of the game, the Bengals (3-4) couldn't protect Andy Dalton or get much pressure on Jacoby Brissett, who was sacked 10 times during a 27-0 loss to Jacksonville the previous week -- the first time Indianapolis was blanked in 15 years.

Brissett got them in position for a soothing win. His second touchdown pass put the Colts (2-6) in position. Instead, Dunlap snatched it away with 6:58 left.

"It's a timing thing," coach Marvin Lewis said. "He has a knack for that."

Indianapolis had a chance in the closing minutes, driving to a fourth-and-4 at the Cincinnati 48-yard line. Brissett was hit as he threw an incompletion, ending it with 1:18 to go.

"Dunlap made a heck of a play," Colts tight end Jack Doyle said. "That's what stinks about the NFL. It's hard right now."

Dalton was 17 of 29 for 243 yards with a pair of touchdowns. The Bengals' running game had little success against a defense that allowed the Jaguars to score on their first four possessions a week earlier, managing only 58 yards as it struggled again.

The Bengals had only one first down and 19 yards in the second half of a 29-14 loss in Pittsburgh the previous week. The offensive line couldn't give Dalton much time or open holes for the running backs, leaving it up to the defense to make the decisive play.

Adam Vinatieri kicked three field goals for the Colts and moved into a tie with Gary Anderson for second-most points in NFL history with 2,434. The Colts couldn't get the extra yards needed on their final possession to let him try for a 28th game-winning kick in the final minute. They've lost three in a row for the first time since 2015.

"At some point, good luck will come our way," receiver T.Y. Hilton said. "It just didn't go our way today."

Fans displayed a banner in the upper deck that said: "Hope Is Not A Plan." The banner was removed a few minutes later. The game drew 57,901 fans, the largest for a game this season at 65,515-seat Paul Brown Stadium.

In the first half, the Bengals blocked a punt, the Colts blocked a field goal, and Cincinnati's Alex Erickson fumbled two punts, recovering one of them.

The Colts' Frank Gore passed Barry Sanders for sixth on the NFL career list for carries. He started his 100th consecutive game, the first running back to do so since Curtis Martin started 119 in a row from 1998-2005. Gore finished with 82 yards on 16 carries. ... Bengals RB Joe Mixon turned a screen pass into a 67-yard gain, setting up Cincinnati's first touchdown. He also fumbled. Mixon managed only 18 yards on 11 carries.

Colts: Pierre Desir started at cornerback in place of Rashaan Melvin, who has a concussion.

Bengals: CB Adam "Pacman" Jones started after missing one game with a bad back. DL Michael Johnson hurt his back late in the first half and didn't return.

Colts: Indianapolis plays at Houston on Sunday. The Texans have won the past three in the series.

Bengals: Cincinnati plays at Jacksonville on Sunday, the first of three straight road games. The Bengals have won the past four in the series, their most recent meeting in 2014.

Henry Hammers Colts, Falcons Roast Raiders
Plus, the Patriots earn a gritty win over Arizona, the Bills outlast the Chargers, and the Vikings win in comeback fashion.
5 days ago

Herd Hierarchy: Week 12
It's a bloodbath in the latest "Herd Hierarchy," where Cowherd has tossed out four top 10 teams from last week.
November 25