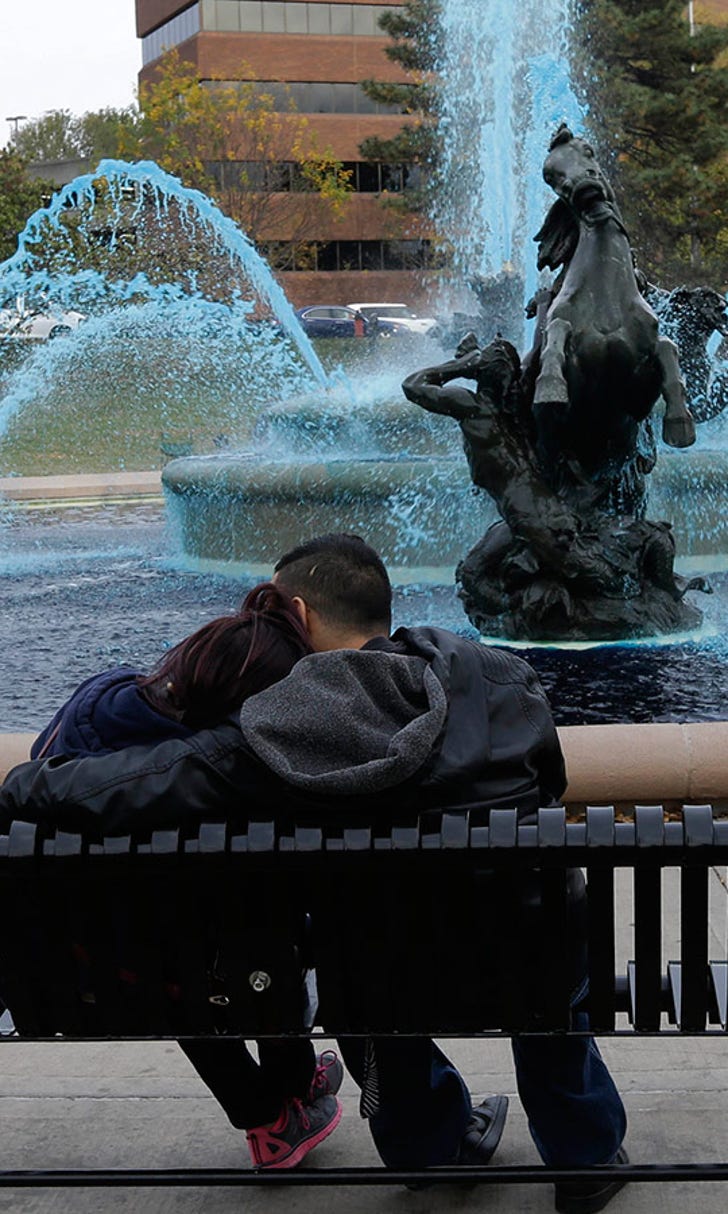 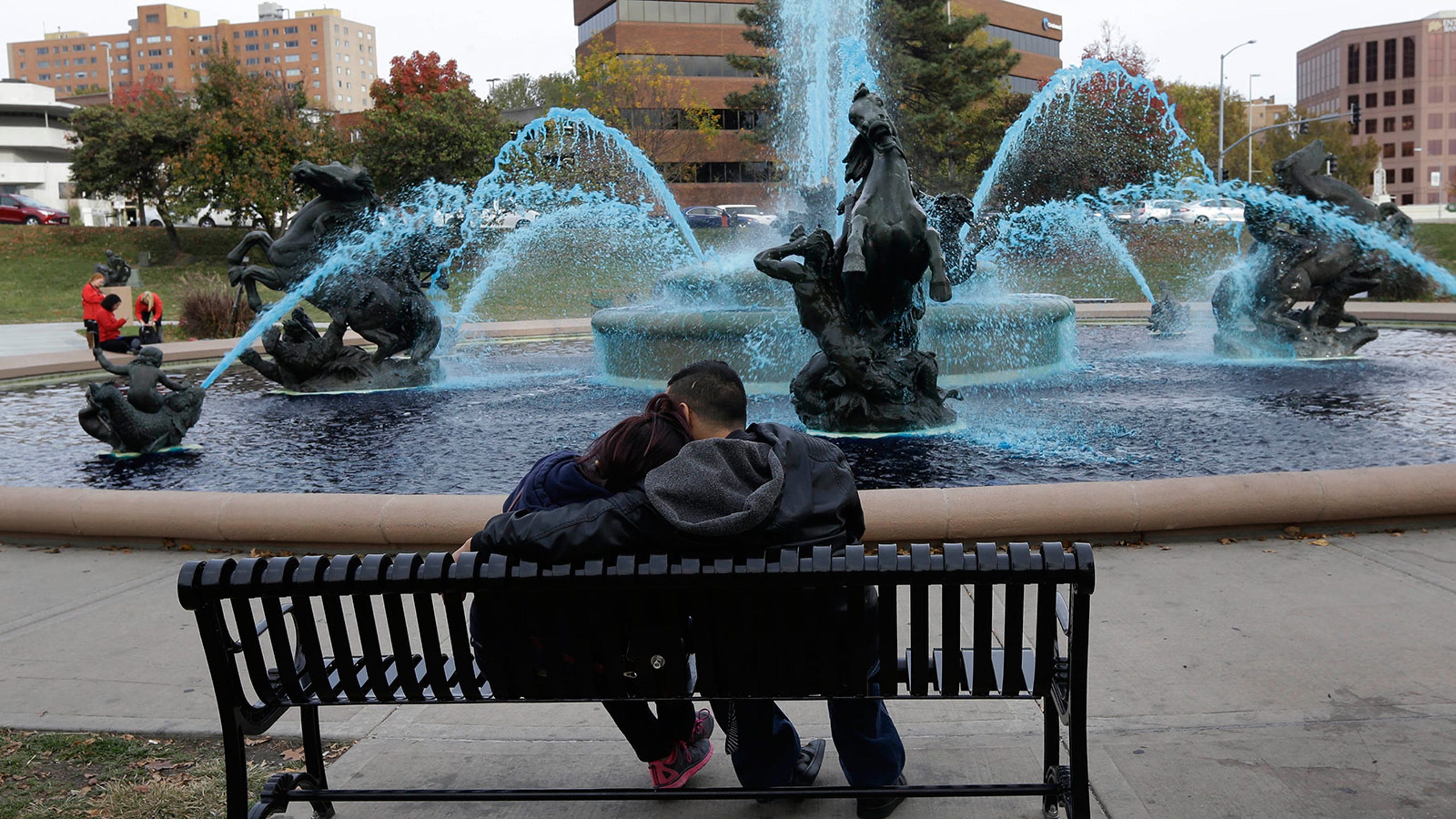 City of Fountains is turning blue for Royals 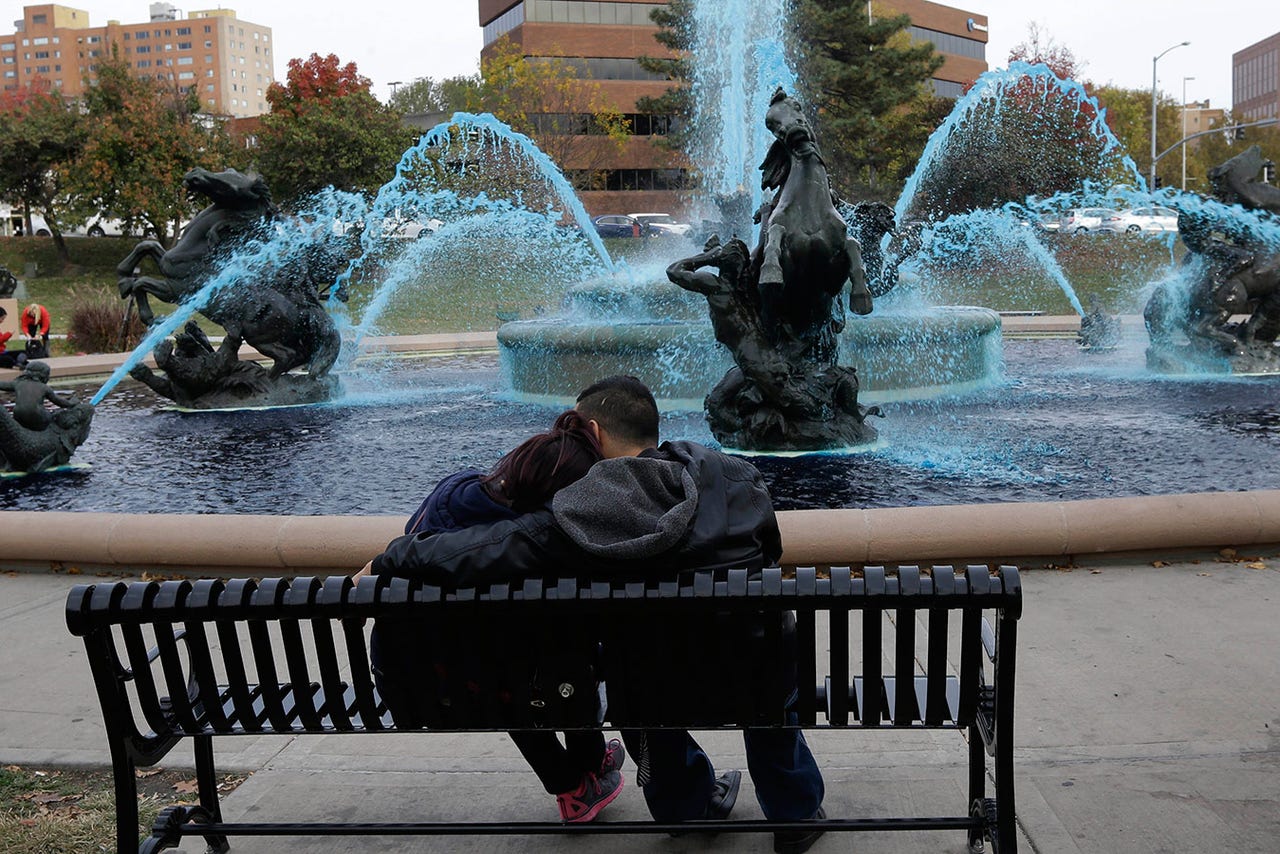 KANSAS CITY, Mo. -- The World Series is in town, and Kansas City is getting a dye job. The City of Fountains is turning blue for the Royals.

Kansas City has 48 publicly owned fountains. Throughout the metropolitan area, which spans parts of Kansas and Missouri, there are more than 200 in public spaces, according to the city's Parks and Recreation department.

The city, with financial help from the Royals, dyed five of the fountains blue Oct. 5, the day after the club secured home-field advantage for the postseason.

Now, with the Royals in the World Series for the second straight year, Parks and Recreation spokeswoman Heidi Downer said they'll remain blue until the Series is over. She called this "great PR and marketing for our fountains."

Downer said some of the city's fountains can't be dyed from their natural water color because they contain porous elements that could soak up the color or their pumping systems can't handle the dye. Of the seven that can be tinged blue, using a food-grade quality dye, two are down for repairs.

The dyed fountains include the frequently photographed J.C. Nichols Memorial Fountain on the east entrance of the Country Club Plaza. The plaza is considered the nation's first major shopping area built for customers arriving in cars.

Nichols, a developer, was behind the upscale shopping development that is modeled architecturally after the buildings of Seville, Spain. His family initiated bringing the four heroic horsemen who are the fountain's centerpiece to Kansas City in 1951. The horsemen, which were sculpted in 1910 and initially adorned a New York mansion, were refurbished, with the fountain dedicated in 1960.

Beyond city fountains, several other fountains also have turned blue to celebrate the team's playoff success. And while the water in the fountains that line the outfield of Kauffman Stadium isn't dyed, the signature ballpark fixture features lights that give the water a blue hue.

The city first began dying its fountains about a decade ago, starting with pink for breast cancer awareness. Since then it's made them a rainbow of colors for nonprofits and citywide celebrations, including teal for ovarian cancer awareness and red for the Kansas City Chiefs.

Initially, the city charged a pittance for the service. But a couple years ago it began asking for $1,000 for the initial dye job and $200 a day after that. Any extra money collected beyond what is needed for the dying goes to a fountain maintenance fund. A group called the City of Fountains Foundation is working to raise about $2.9 million for fountain repairs.

The city considers the Royals' World Series appearance part of a citywide celebration. So it likely won't charge the club the full amount. Last year, Downer said, the Royals chipped in $5,000 for the fountain dye job.

Familiar Faces In New Places
With the MLB season quickly approaching, here's a look at how some of the biggest offseason moves in baseball could pay off.
15 hours ago