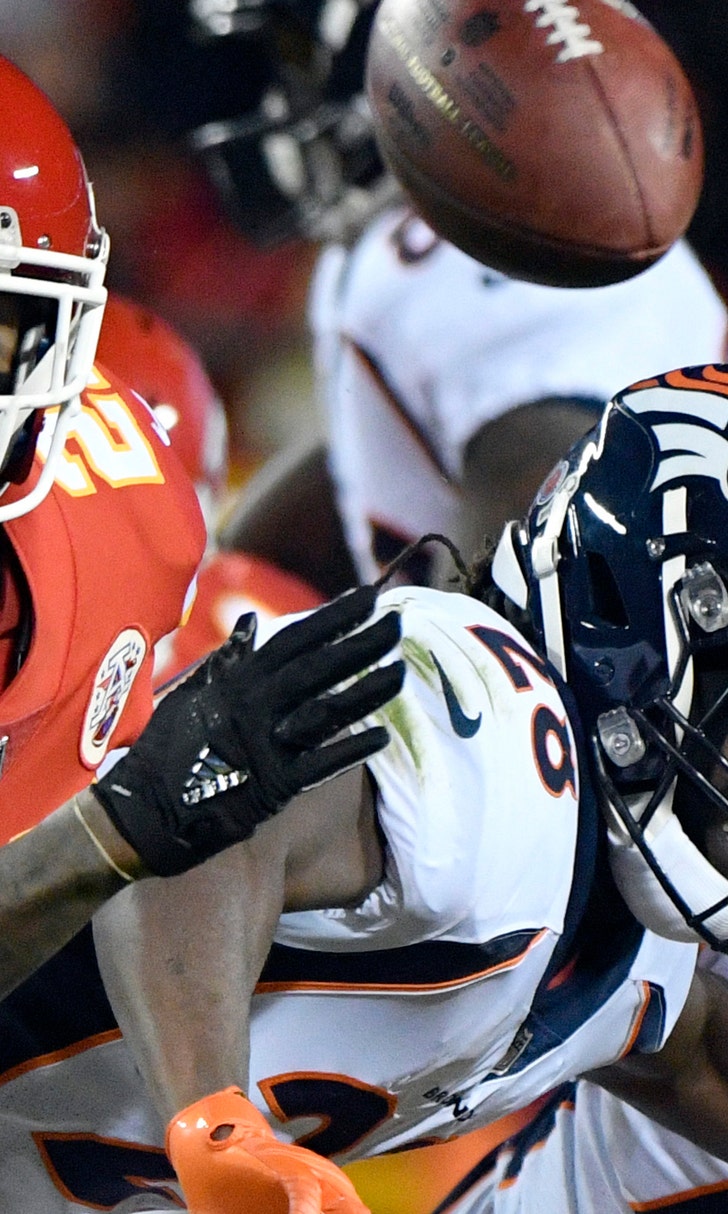 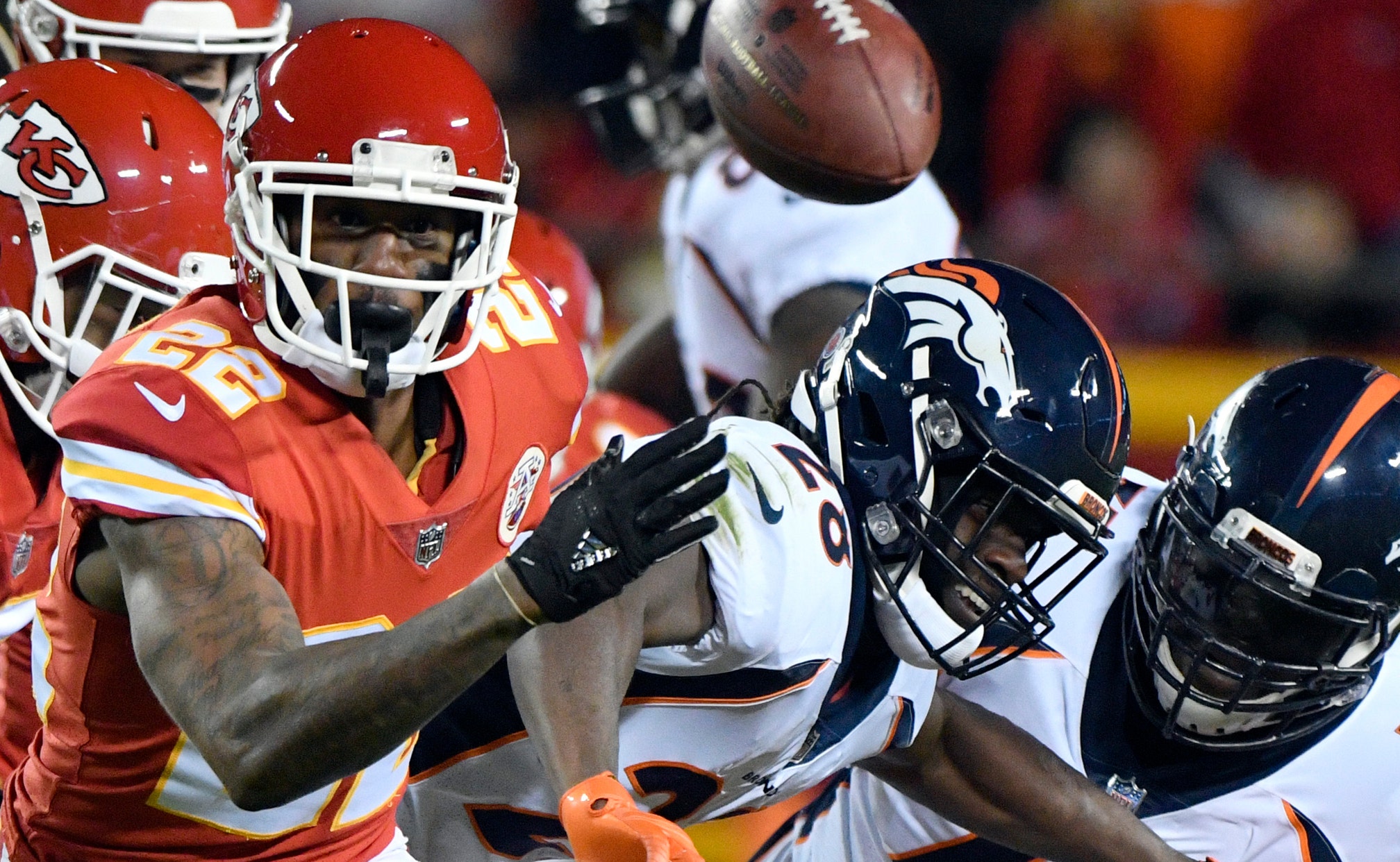 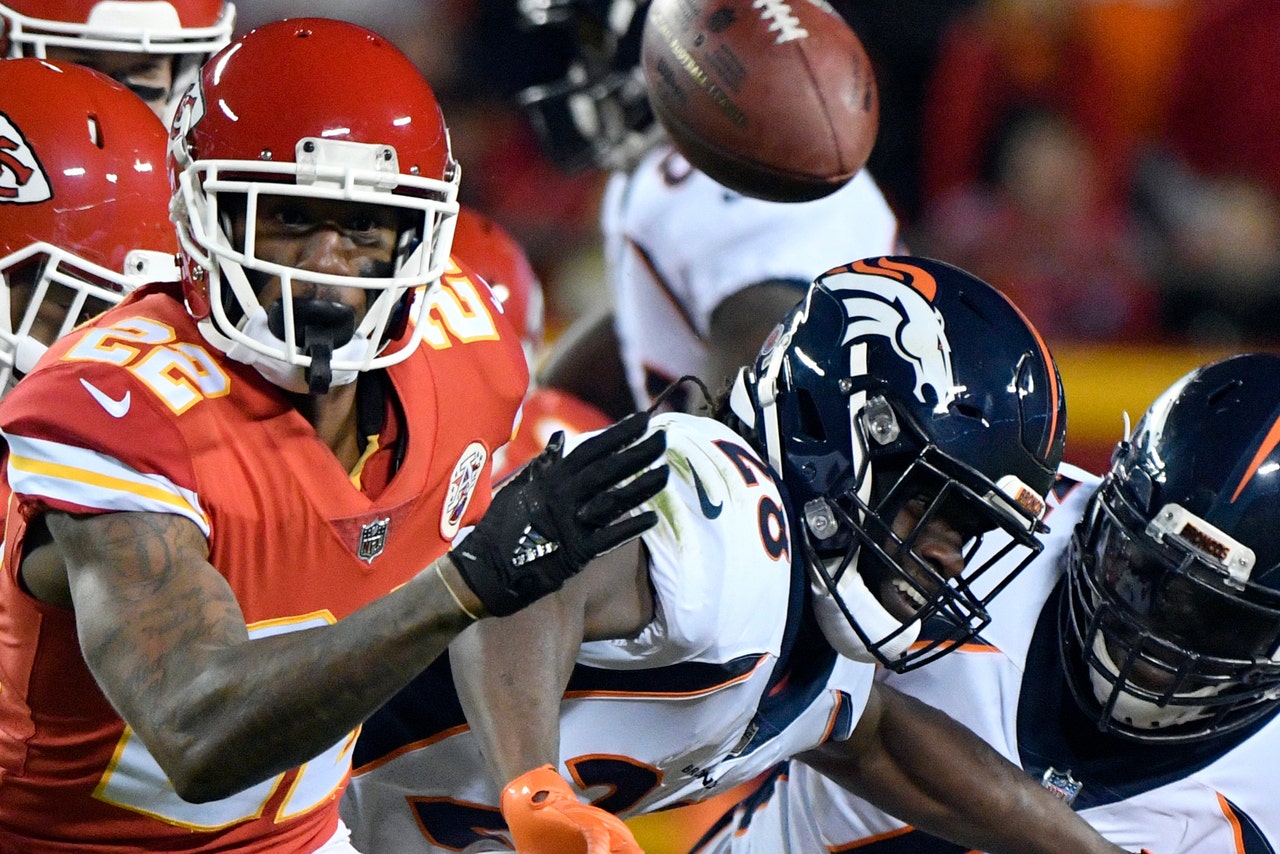 The same group that struggled to contain the Steelers and Raiders in back-to-back losses shut down Denver, picking off Trevor Siemian three times, picking up two fumbles and taking one of them back for a touchdown in a 29-19 victory over their AFC West rivals.

It was precisely the kind of dominant performance the Chiefs (6-2) needed against the Broncos (3-4), whose own league-leading defense held Alex Smith and Co. in check all night.

Harrison Butker kicked five field goals for Kansas City, and Smith threw for 202 yards and a touchdown. Most of it went to Travis Kelce, who hauled in seven balls for 133 yards and the score.

But it was the turnovers that proved to be the difference in the game.

"That's insane," said Broncos coach Vance Joseph, who declined to say whether a quarterback change may be necessary. "You can't win when you turn the ball over five times. The guys worked too hard to have a big game to give it away five times."

Siemian finished 19 of 36 for 198 yards and a touchdown, and has now thrown eight picks and only three TD passes in the past five games. The Broncos have lost all but one of them.

"I just turned it over," he said glumly. "A couple of bad decisions."

It was a crucial bounce-back win for the Chiefs, who had their 12-game AFC West winning streak snapped 10 days ago in Oakland. The Chiefs had won five straight to start the season before losing to the Steelers and then to the Raiders on Derek Carr's last-second touchdown throw.

It started just like old times, too: Jamaal Charles with a run, the Chiefs with a touchdown.

The only difference was Charles, who went to four Pro Bowls with the Chiefs, was back in Kansas City with the Broncos. And the TD came when the opportunistic Marcus Peters stripped him, picked up the loose ball and returned it 45 yards for the opening score.

When the Chiefs were on offense, they went right to Kelce, who also had success against the Broncos in both of their meetings last season. He beat Darian Stewart for a 29-yard TD catch and a 14-0 lead.

"I want the ball every single play. That's just how I grew up playing," he said.

The Chiefs were threatening to put the game out of reach later in the first quarter when Reid got cute with the play-calling. Rather than keep the ball in the hands of Smith, who hasn't thrown a pick all season, he let wide receiver Tyreek Hill throw it -- and he was intercepted in the end zone.

"I messed it up myself," he said. "I know coach Reid isn't going to let me throw another one."

They marched 60 yards to set up their second field goal by Brandon McManus, and then capped an 80-yard drive with Booker's touchdown run. It was just the second time Denver had reached the end zone in 13-plus quarters, but it got Joseph's team within 20-13 with a quarter to play.

Butker answered with another field goal, and the Chiefs defense held on fourth-and-4 near midfield to get the ball back. Butker added two more field goals, the last with 4:41 left, giving him 18 straight made attempts and putting the game out of reach.

"It's not what you want offensively," Smith said with a wry grin. "You love having him on the team and making those, but I'd rather have him kicking PATs."

Broncos WR Emmanuel Sanders (ankle) and LB Todd Davis (ankle) were inactive, as was Chiefs RG Laurent Duvernay-Tardif (knee). Kansas City lost WR Albert Wilson (hamstring) and OLB Dee Ford (back) in the first half and neither returned to the game.

The Broncos activated LB Shane Ray and the Chiefs activated CB Steven Nelson before the game. Ray returned to the lineup after missing the first six games with a torn ligament in his left wrist, while Nelson had been on injured reserve following core muscle surgery.

HALL OF AN HONOR

The Chiefs renamed the broadcast booths at Arrowhead Stadium for Hall of Fame player and broadcaster Len Dawson before the game. The 82-year-old Dawson led the Chiefs to victory in Super Bowl IV. He is retiring from work as a radio color analyst after the season.

MVP Watch: Rodgers Leapfrogs Russ
A red-hot Aaron Rodgers is moving up the odds list of MVP candidates, but the award looks like Patrick Mahomes' to lose.
10 hours ago

NFL's Top Plays Of Week 12
It's another wild Sunday in the NFL. Check out the best moments from across the league!
2 days ago

Our 60-Minute Drill For NFL Bettors
Geoff Schwartz, Jason McIntyre and Clinton Portis answered all your questions in the hour before kickoff on Sunday.
2 days ago

Tom vs. Mahomes' Time
It's the Patrick Mahomes era. But can Tom Brady possibly turn back the clock Sunday against the Chiefs and his heir apparent?
4 days ago
those were the latest stories
Want to see more?
View All Stories
Fox Sports™ and © 2020 Fox Media LLC and Fox Sports Interactive Media, LLC. All rights reserved. Use of this website (including any and all parts and components) constitutes your acceptance of these Terms of Use and Updated Privacy Policy. Advertising Choices. Do Not Sell my Personal Info