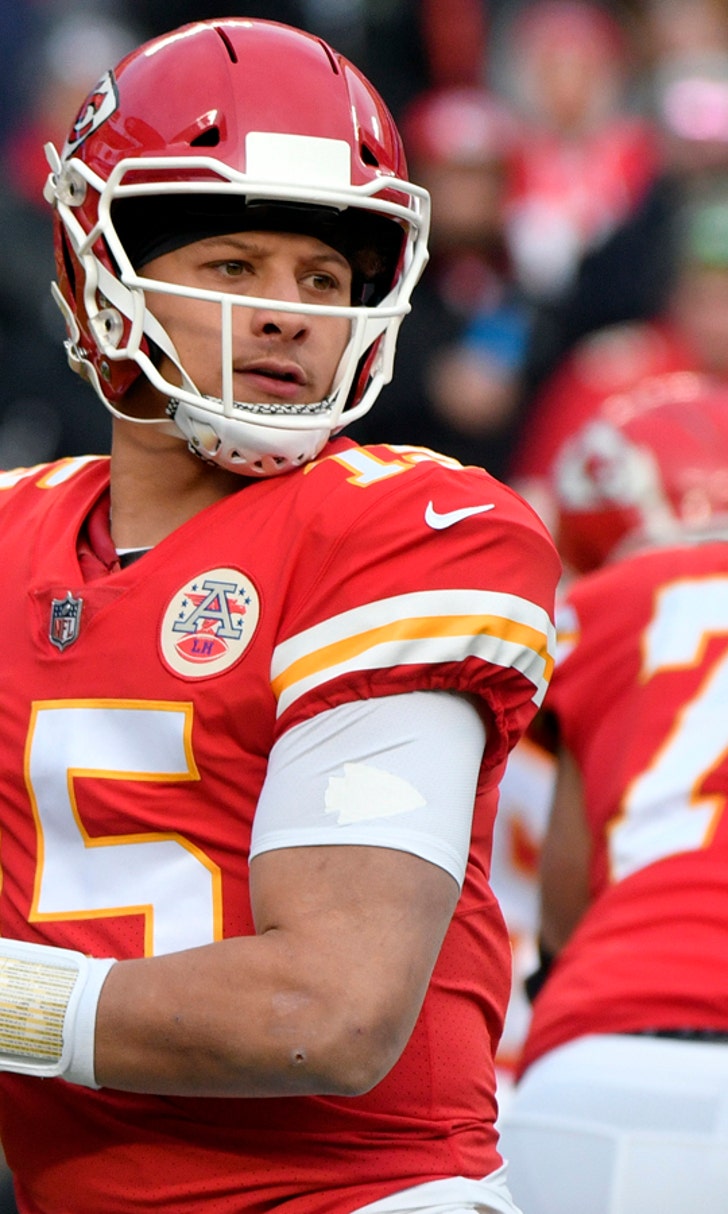 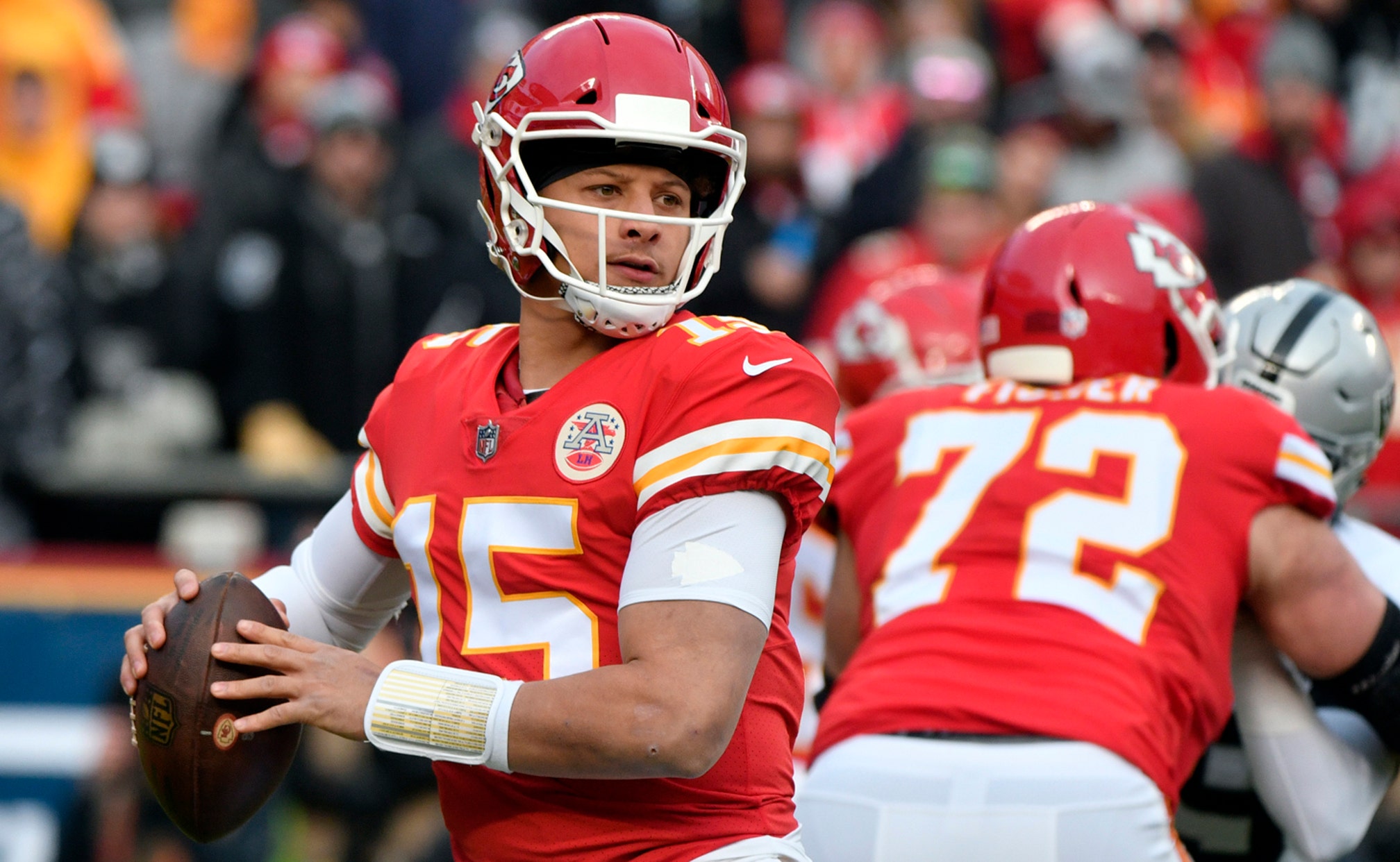 Chiefs clinch division, No. 1 seed in AFC with 35-3 win over Raiders 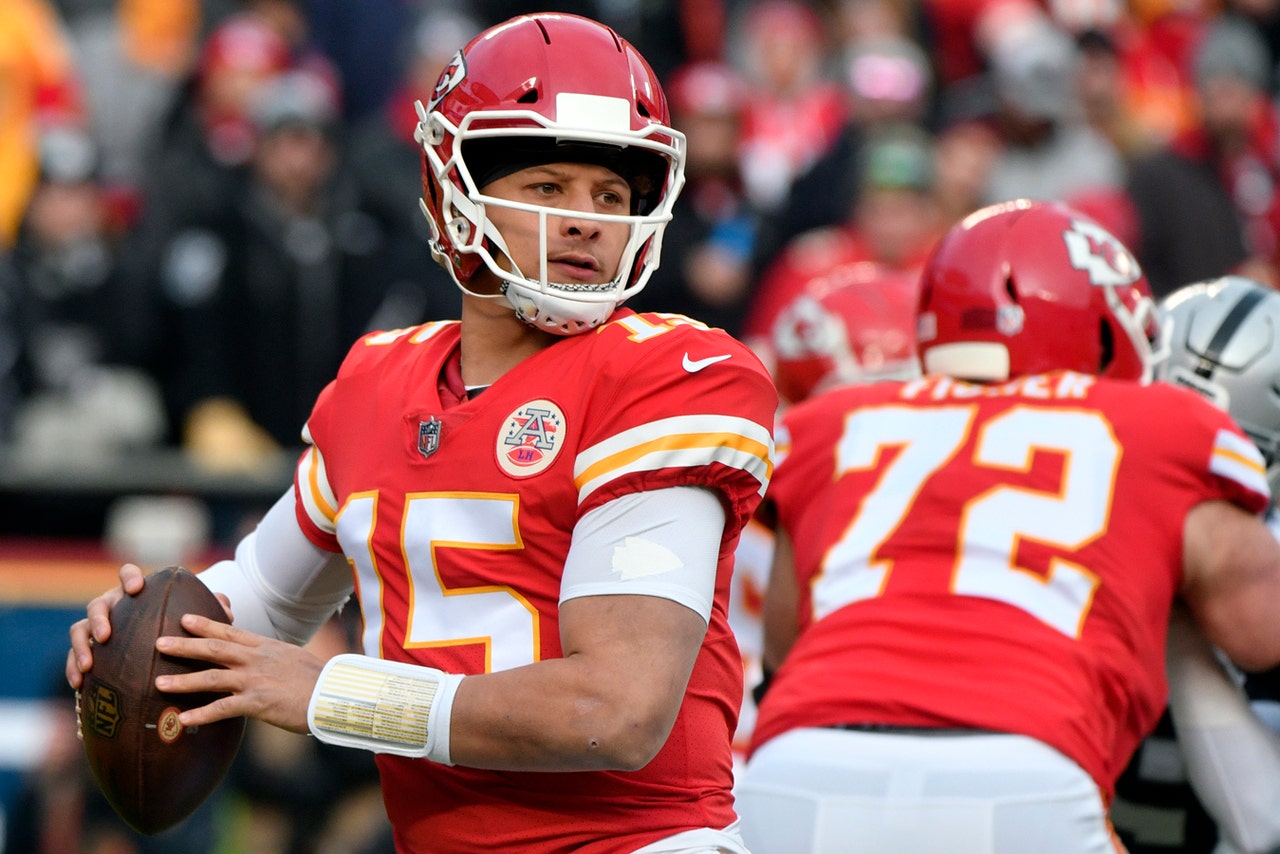 Patrick Mahomes finished the 2018 regular season with 5,097 passing yards and 50 touchdown passes, joining Peyton Manning as the only QBs to hit 5,000 and 50 in the same season.

KANSAS CITY, Mo. — Patrick Mahomes stalked Chiefs wide receiver Damarcus Robinson on the sideline as chants of "MVP" echoed throughout Arrowhead Stadium, trying to track down a football that would serve as a keepsake not only of this night but of this season.

The first-year starter had just thrown an 89-yard scoring strike to Robinson, the 50th time one of his passes ended up in the end zone. It also gave Mahomes more than 5,000 yards passing, not to mention put a dagger in Oakland and clinched the AFC West title and No. 1 seed in the playoffs.

"They're special," Mahomes said after securing that memento, and after Kansas City had wrapped up a 35-3 whitewash of the Raiders on Sunday. "To do those things in this league, that doesn't happen."

Mahomes finished with 281 yards passing, the highlights the strike to Robinson and a 67-yard TD pass to Tyreek Hill. That gave him 5,097 yards and 50 touchdown passes, and allowed Mahomes to join Peyton Manning as the only QBs to hit 5,000 and 50 in the same season.

"This team, we love each other. We root for each other. And that's why we've had so much success," said Mahomes, who already had shattered just about every franchise passing record.

Hill finished with five catches for 101 yards, becoming the Chiefs' single-season leader for yards receiving with 1,479, while adding a fourth-quarter touchdown run. Damien Williams added 51 yards and a score on the ground as the Chiefs (12-4) beat the Raiders for the eighth time in nine games.

The decisive win came after Kansas City squandered a chance to clinch the division with a fourth-quarter collapse against the Chargers and again in a shootout loss last weekend in Seattle.

"This was a tricky game," Chiefs coach Andy Reid said. "We felt like we let off the accelerator there lately and we didn't take advantage of opportunities."

No problem with that on Sunday.

Derek Carr had his league-leading streak of 332 passes without an interception snapped when the Chiefs' Daniel Sorensen returned a pick for a touchdown in the first quarter. Carr threw another pick and lost a fumble as Oakland (4-12) turned the ball over on its first four possessions.

He finished 23 of 32 for 184 yards, and Doug Martin ran for 100 yards but also lost a fumble, as the Raiders headed into an offseason of uncertainty surrounding where they will play next season.

"Obviously, we got a lot a work to do," said Raiders coach Jon Gruden, who wrapped up his first season back with the franchise. "I know today was not a good note, but it's a great group of guys who laid quite a foundation and I think we can build on that. I'm excited about that."

The Chiefs eliminated any drama in the first 20 minutes.

Mahomes started the scoring barrage when he threw a perfect post pass to Hill, who waltzed into the end zone for his long touchdown reception. And a few minutes later, Sorensen stepped in front of tight end Jared Cook — who had inexplicably stopped his route — for a 54-yard pick-6.

The Chiefs defense kept causing turnovers, and Williams capped another effortless drive with a short touchdown run, giving Kansas City a comfortable 21-0 lead late in the first half.

"This was a tricky game," Chiefs coach Andy Reid said, "and the guys took care of business."

The league's highest-scoring offense continued its onslaught after the break.

Mahomes delivered the clincher when he floated a pass deep downfield to Robinson, who ran out of the grasp of his would-be tackler. Robinson was so far ahead of the defense that he turned around at the 15-yard line and backpedaled into the end zone — getting a taunting call as his reward.

Not that it mattered for the Chiefs, who were already celebrating their postseason bye and what they hope is a Super Bowl road through Arrowhead Stadium. Hill merely added to the party when he added his rushing touchdown in the fourth quarter to put the game away.

The Chiefs' Travis Kelce had five catches for 62 yards, giving him 1,336 yards this season. That broke the NFL record for tight ends set by the Patriots' Rob Gronkowski in 2011, only for the 49ers' George Kittle to pass him a few minutes later. "The individual accolades in this game alone, I think, are a bit overrated," Kelce said. "You've got 11 guys out there trying to push for one goal and sure enough, we achieved that as a team."

Mahomes was 14 of 24, giving him a franchise-record 383 completions this season. He began the day tied with Trent Green with 369. ... Reid broke a tie with former Chiefs coach Marty Schottenheimer for seventh on the NFL's career wins list with his 206th.

Raiders: DT Maurice Hurst was inactive after dealing with an ankle issue all month. He finished with four sacks, matching the lowest total to lead the Raiders since sacks became a stat in 1982.

Chiefs: A postseason bye and divisional-round game at home await.