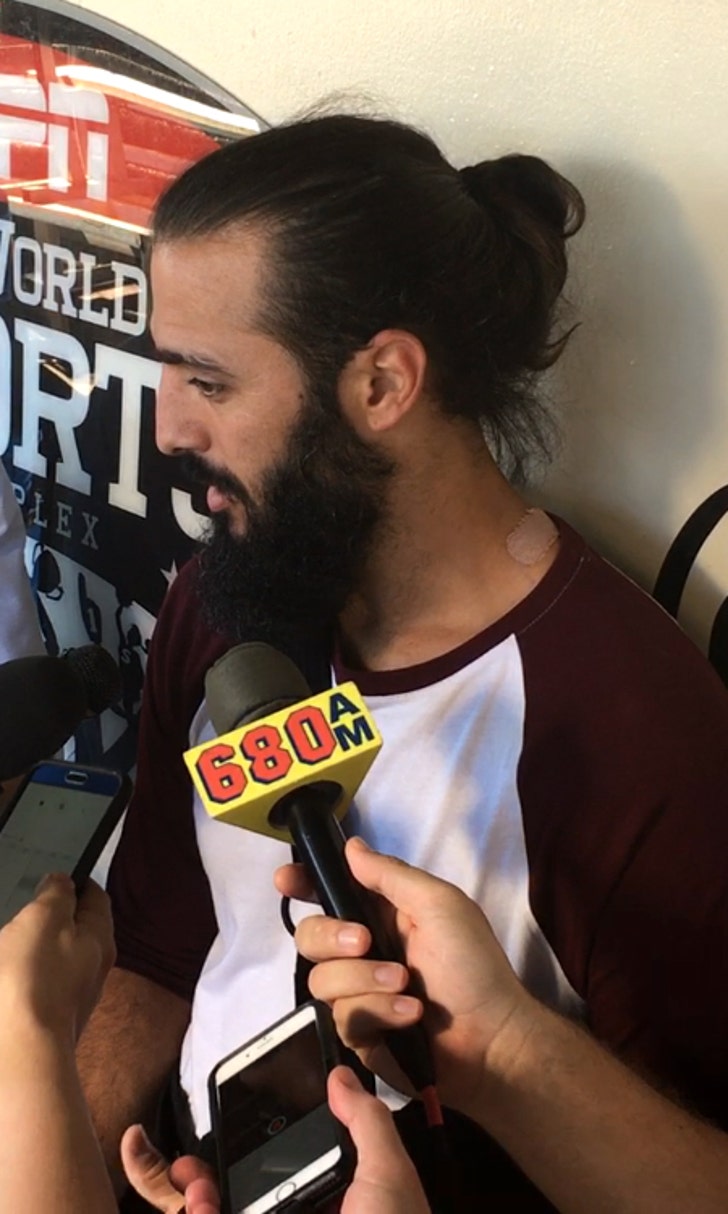 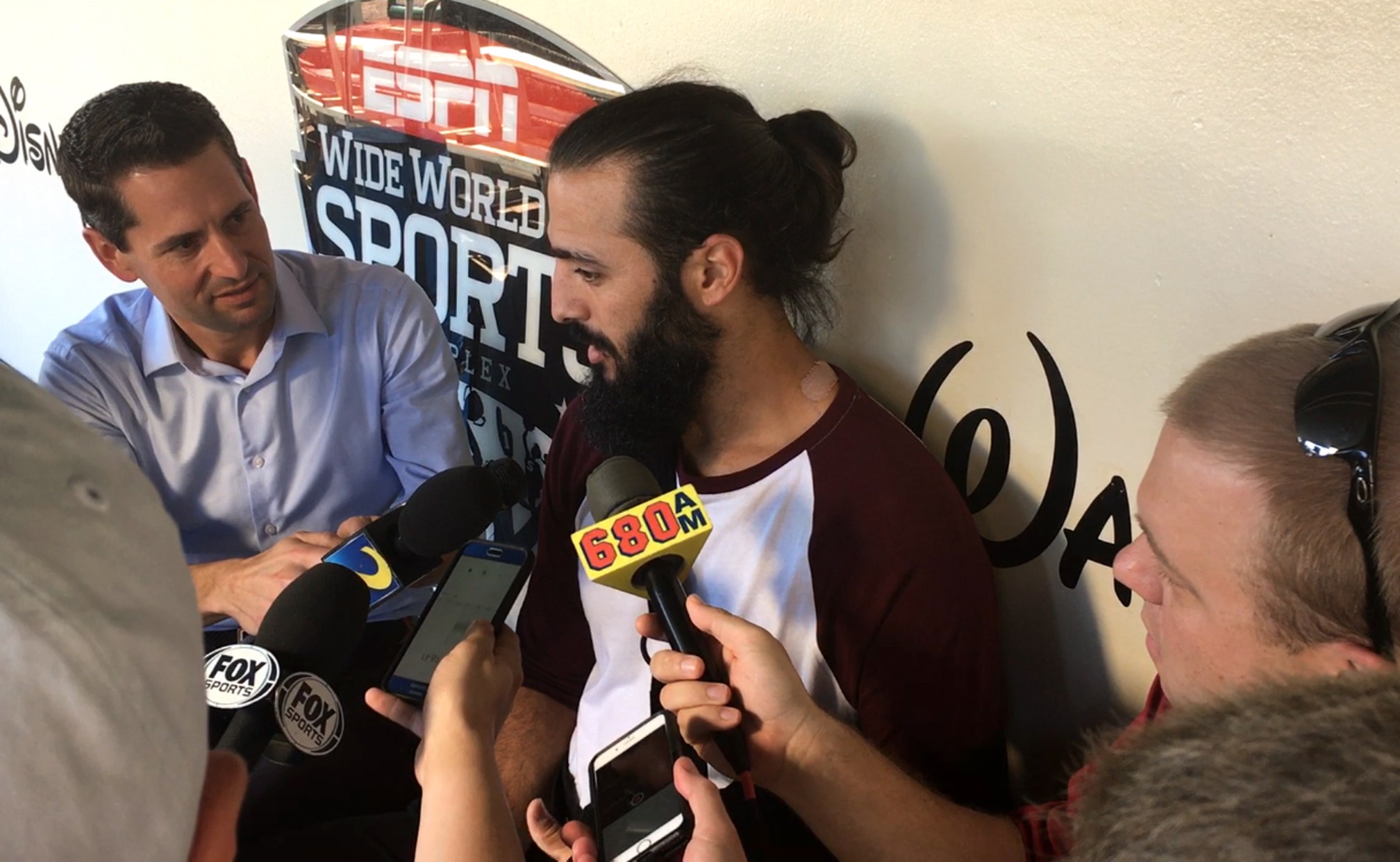 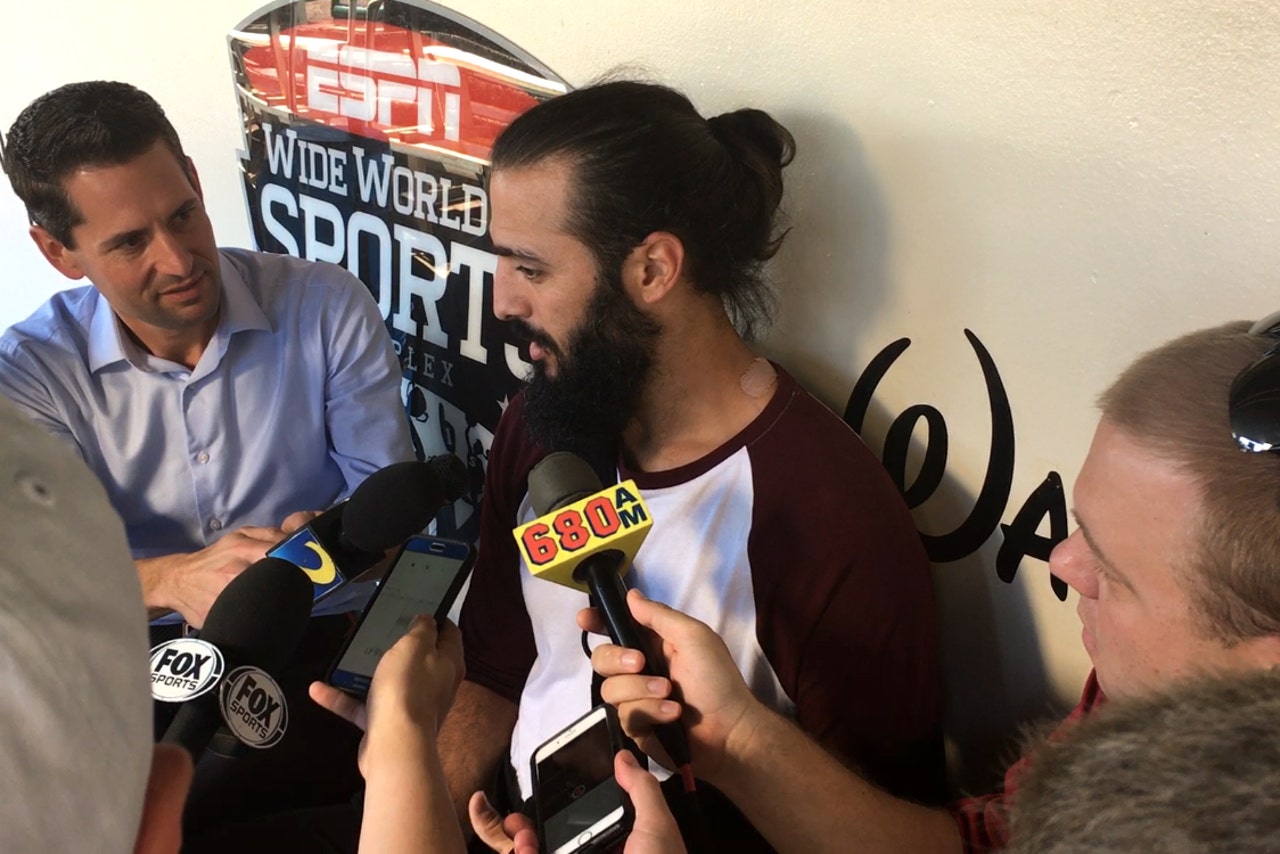 KISSIMMEE, Fla. — In the frantic aftermath of the car crash involving super-utility player Sean Rodriguez, his wife, Giselle, and two sons on Jan. 28 in Miami, the exact details remain fuzzy. The 31-year-old described the scene as a "blur" — a stolen police car in flames illuminating the scene as Rodriguez checked on Giselle, Sean "Gogo" Jr.  and Zekiel.

"You see your whole family laying down on the ground and all you’re worried about is, ‘Are they OK?’" Rodriguez said in his first visit to the Atlanta Braves' spring training complex on Sunday. "Obviously my 7-year-old (Gogo) had a lot of blood and everything everywhere. I kinda saw movement so I said, ‘Alright, he’s breathing. He should be OK.’ And then my 2-year-old (Zekiel), he was a champ. He wasn’t crying. He was just looking at me like, ‘Daddy, what happened?’”

At the time of the accident, Rodriguez felt few, if any, indications of his own injury.

Meanwhile, Giselle's side of the vehicle absorbed the brunt of the accident's force, suffering a fractured tibia, femur, wrist and three broken ribs. Gogo, Rodriguez's oldest son, had lacerations on his head, a fractured orbital bone beneath the left eye that did not require surgery and a broken right arm. His youngest son was briefly hospitalized with internal bruising in the hip and groin area.

The other driver, who stole the police cruiser, involved died in the accident.

“It’s mostly a blur and I guess, naturally, I’m trying to keep it that way. I don’t want to remember to much about it," said Rodriguez, who said Giselle and the boys are making an impressive recovery. "My wife and kids are alive. I get to kiss them, say goodnight and I love them every day. For that, I’m just grateful."

Rodriguez, of course, did suffer his own injuries in the accident. Though X-rays and a CT scan at the emergency room that night revealed no damage, the former Pittsburgh Pirate, who signed a two-year, $11.5 million deal with the Braves this offseason, but the doctor advised him to get checked for tendon and tissue damage. As the swelling went down, Rodriguez knew something was wrong and immediately called his agent, who then informed the Braves front office of the situation.

There's a chance Rodriguez, coming off the best offensive season of his career, will miss the entire 2017 season. For now, he's focused on his family's health and making a speedy recovery.

“If it were up to me, I’d be trying to play next month," Rodriguez said. "I know that a lot of (players) say that they’re gonna try to do what they can to get back and be part of the team as quickly as possible. I can promise you that no one will try to do that better than me.