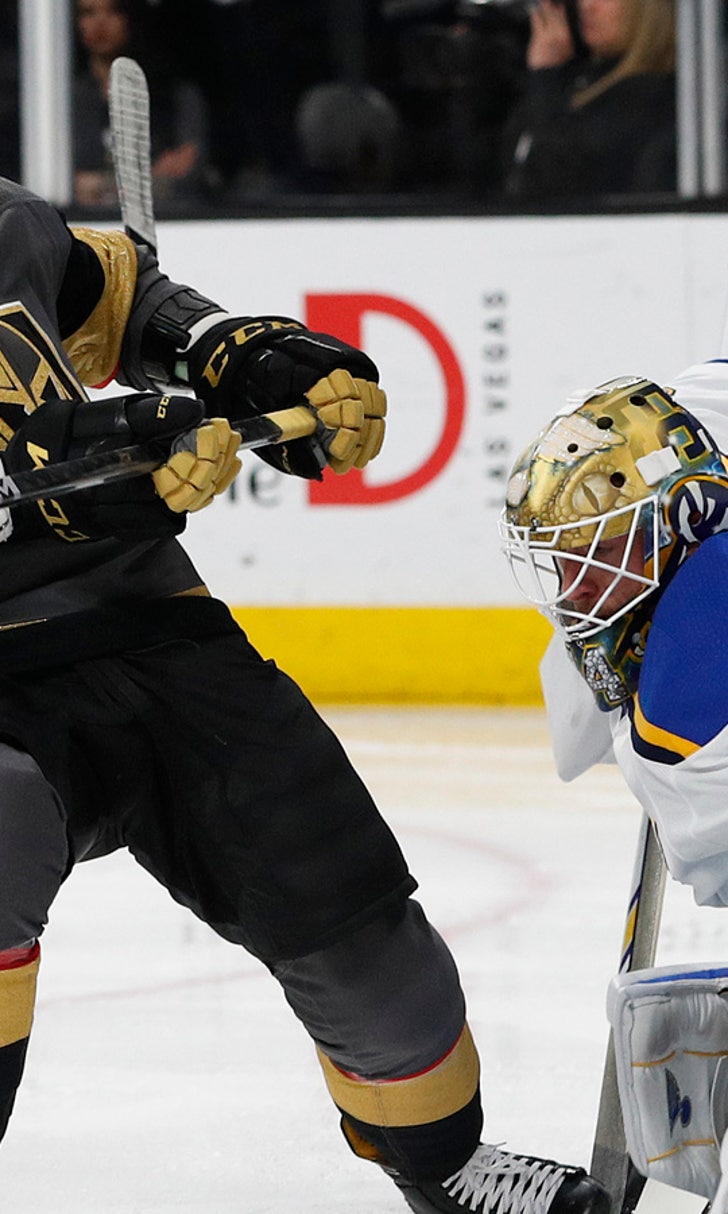 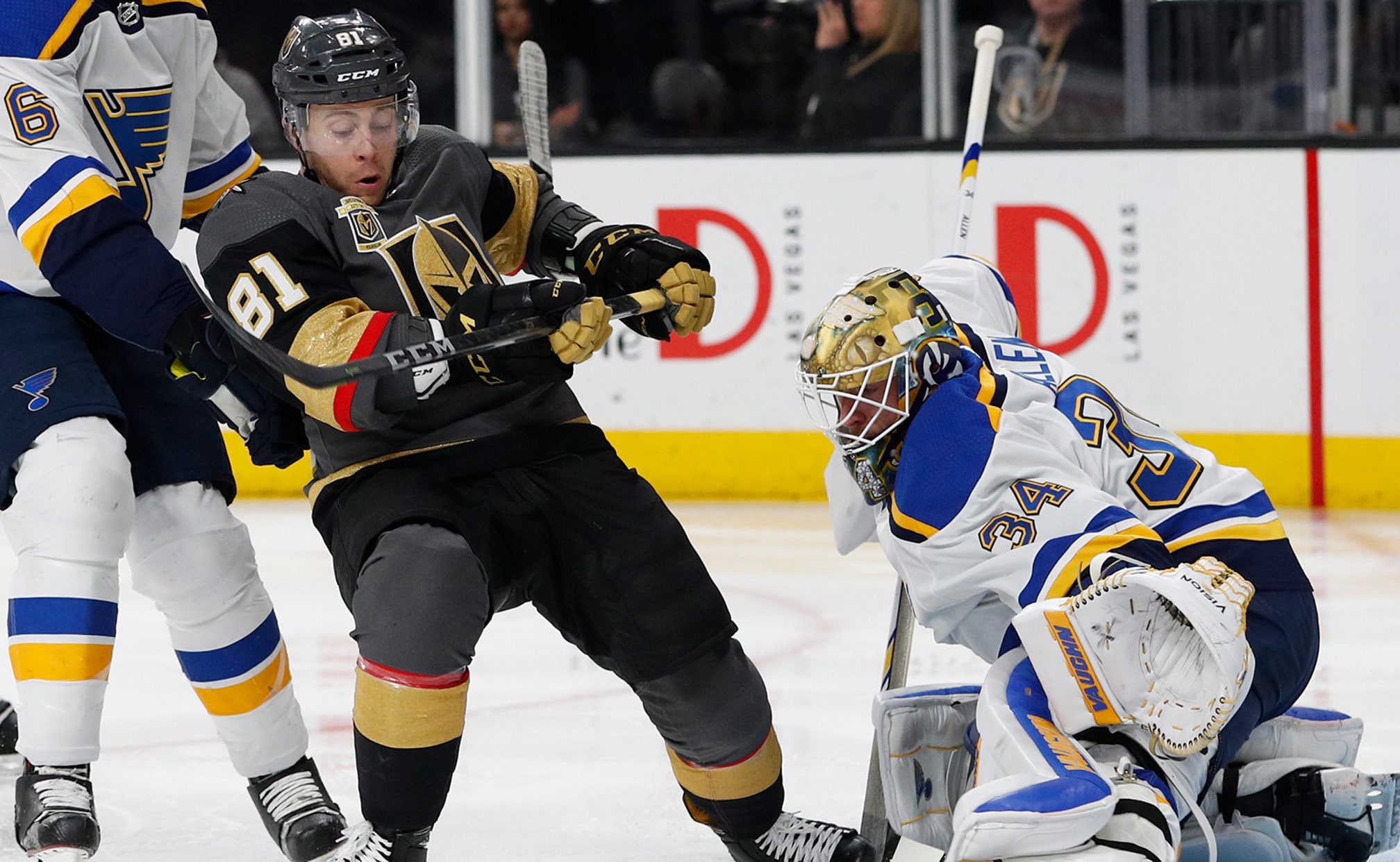 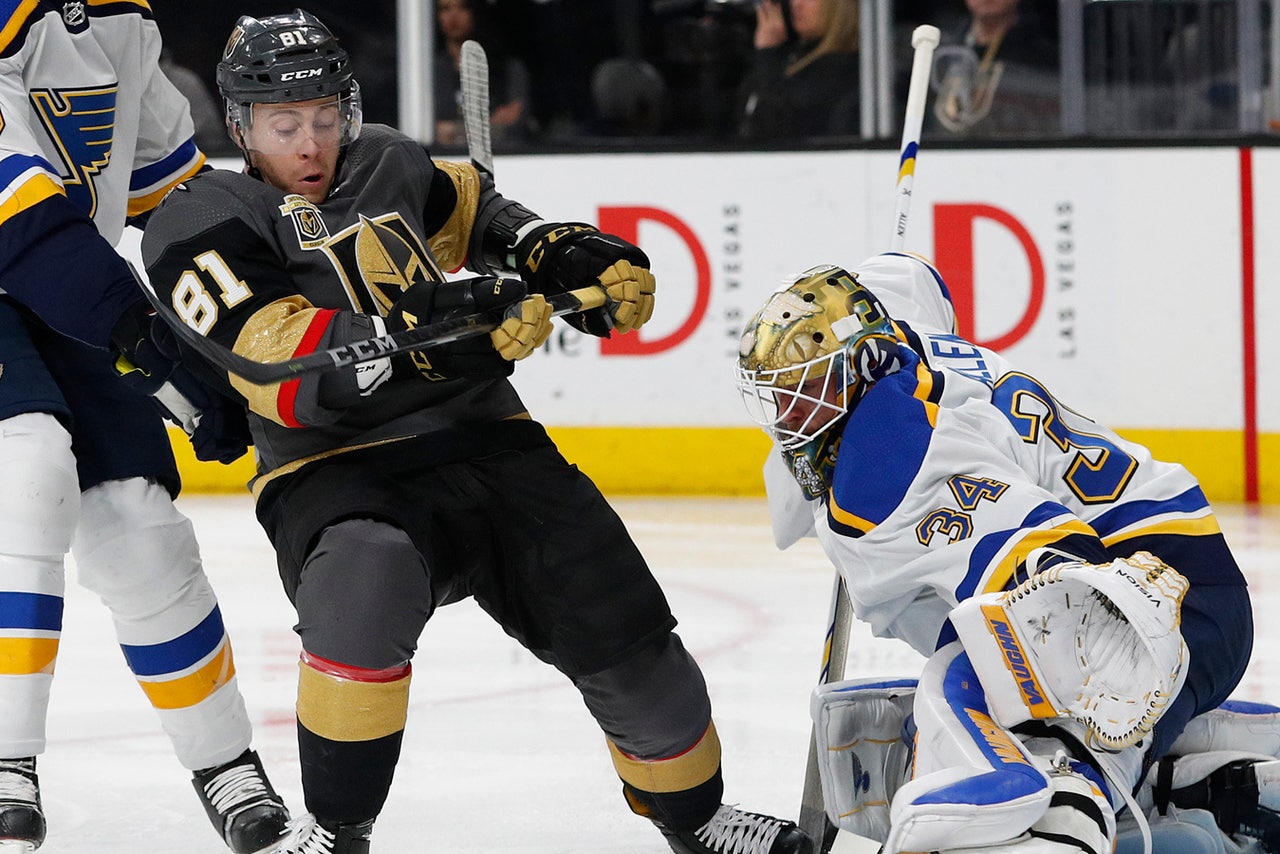 LAS VEGAS -- Vegas Golden Knights general manager George McPhee stood alone in the hallway outside of his team's locker room Friday night, as someone walked by and blurted: "One more, George."

"Yep," McPhee replied, smiling briefly before turning his attention back to his phone.

And if they get it, the Golden Knights will be Pacific Division champions.

Jonathan Marchessault's goal 22 seconds into overtime lifted Vegas to a 4-3 victory over the St. Louis Blues, inching the playoff-bound expansion team closer to a division title in its inaugural season.

The Golden Knights (49-22-7) can win the Pacific with a point in Saturday's home game against San Jose.

"We're trying to get as many points as we can," Vegas coach Gerard Gallant said. "Somebody told me we're one point away from clinching the division and that's what the goal is. Let's keep battling hard, and playing hard, and winning as many games as we can. I really don't care who we beat, and the next season will start soon enough."

St. Louis (43-28-6, 92 points) currently holds the second wild-card spot in the Western Conference, one point back of Anaheim (93). Colorado (92) is tied with the Blues, who hold the tiebreaker.

Barely into overtime, Marchessault took the puck by himself into the zone, skated by two defenders before circling to the point and firing a long wrist shot past Jake Allen for the game-winner.

"We had a great effort and I think it was a real good positive game for us," Marchessault said. "It was a big game tonight. I think it would be great for our fans (to clinch the division), they've been awesome all year. To get the win and clinch the Pacific would be awesome. Whoever we face, we just need to play well and I'm sure tomorrow is going to be a good game."

Patrik Berglund, Brayden Schenn and Chris Thorburn scored for the Blues. Allen, who is now 8-1-1 in his last 10 starts, made 22 saves.

"We fought hard. This is really good hockey team and we knew it was going to be a close game, so not surprised to see it go to overtime, you get into 3-on-3 hockey and anything can happen out there," St. Louis coach Mike Yeo said. "There are some things that we have to be a little bit better at ... I think we could've moved the puck a little bit better tonight. Credit to them, they check well, and they pressure you hard."

But it was the Blues setting the tone early, when Alexander Steen fed Berglund from behind the net, and he smacked home his 13th of the season.

Karlsson tied the game with his 41st of the season, a short-handed breakaway courtesy of a perfect pass from Cody Eakin. Marchessault gave Vegas a brief 2-1 lead with a stroke from a side angle.

Schenn tied the game later in the period when he took a pass from Jaden Schwartz and beat a shielded Subban from the right circle.

After a rather quiet period, Tomas Tatar tapped the puck to Erik Haula, who touch-passed to Neal, who snapped a 12-game drought by going top shelf to beat Allen and give Vegas a 3-2 lead with 3:25 left in the second.

Scottie Upshall's pass from behind the net found Thorburn creeping at the doorstep and the right wing slipped it through Subban's five-hole to knot the game at 3 with 13:46 left.

"Overall, they played really well, they're working hard and they're finding a way to win hockey games," Gallant said. "We got down early, but I love the way we played. We competed the whole 60 minutes. We played a hell of a hockey game tonight against a real good team."

Mike Yeo on what the #stlblues need to work on after their loss to the #GoldenKnights: "I think that we could have moved the puck a little bit better at different times tonight." pic.twitter.com/iYl1mlp4sk

Schwartz has 21 points in 27 games since returning from a lower-body injury on Jan. 25. ... Neal is now one game from playing in his 700th career game and five points shy from his 500th career point. ... Marchessault is one game away from his 200th career game.