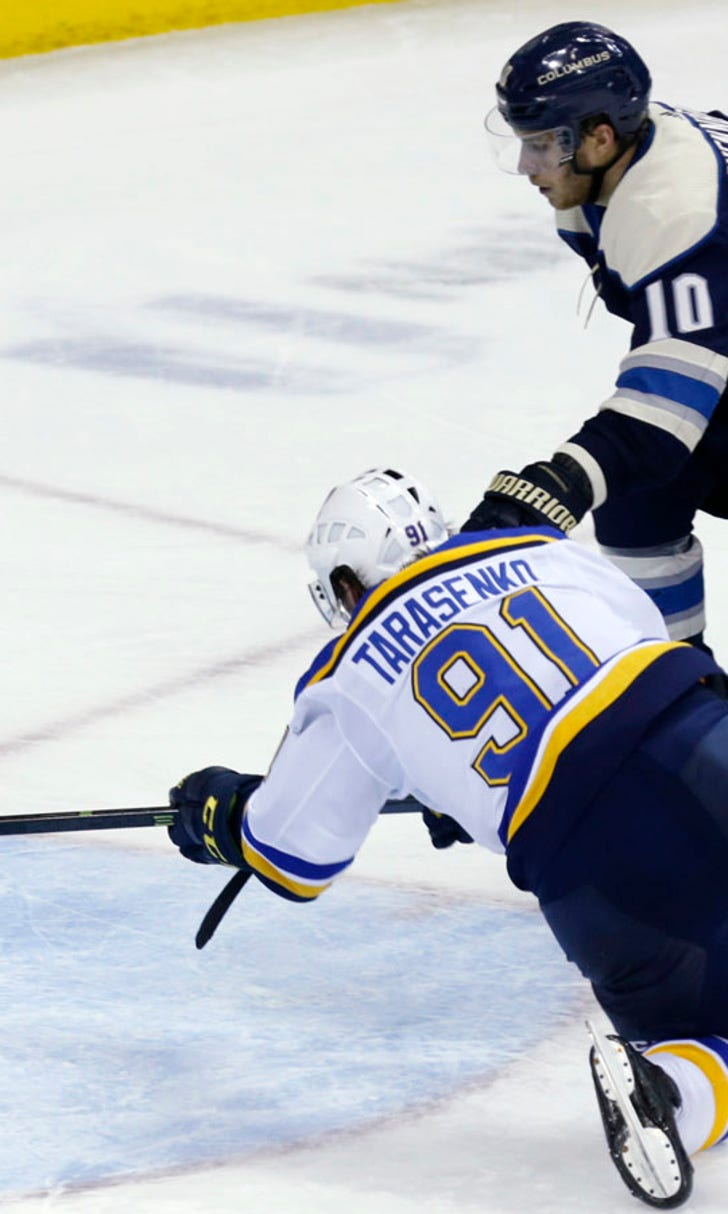 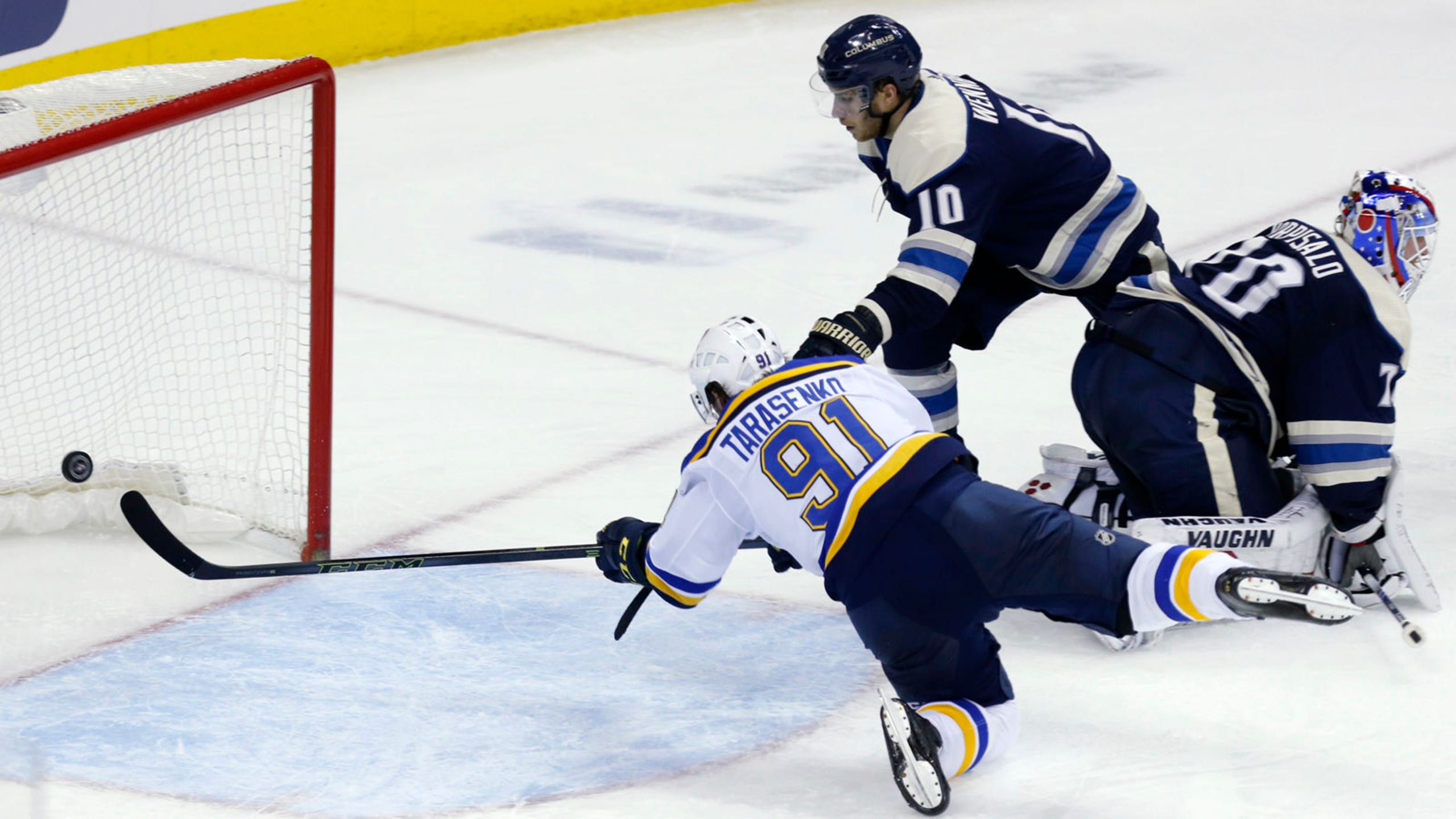 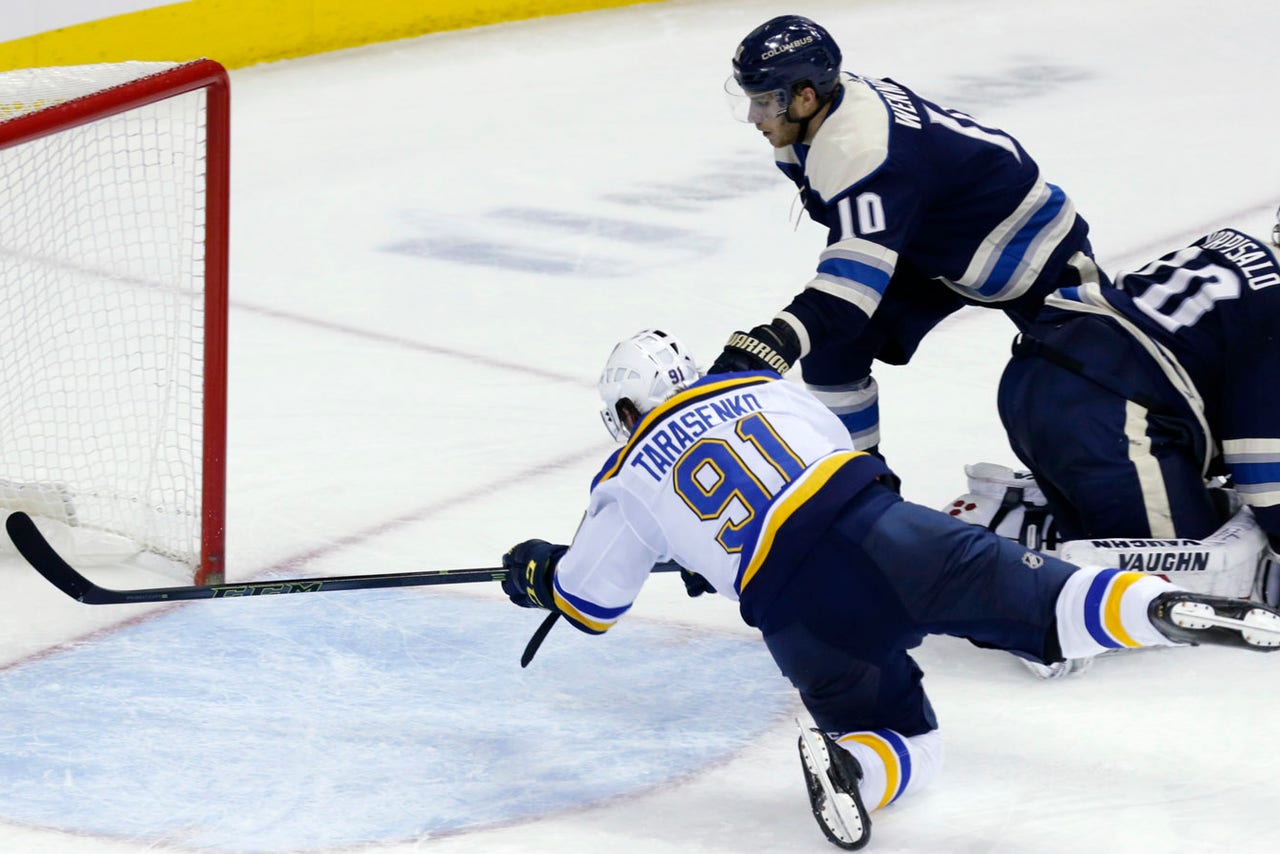 Vladimir Tarasenko had a goal and two assists, and the Blues beat the slumping Columbus Blue Jackets 4-2 on Saturday night.

O'Reilly added a goal and an assist, Oskar Sundqvist also scored and Brayden Schenn had three assists for St. Louis, playing its first game in 10 days due to the All-Star game and the team's bye week.

"Coming off the break we had the mentality to be heavy and play a simple game," O'Reilly said. "It wasn't a perfect game by any means. We still had some breakdowns but guys showed up and we were ready to work."

The Blues jumped ahead 2-0 early as rookie Jordan Binnington took at shutout into the third period, finishing with 18 saves to improve to 6-1-1.

Oliver Bjorkstrand and Pierre-Luc Dubois scored and Artemi Panarin had two assists for the Blue Jackets, who have dropped a season-worst five in a row and cling to the last playoff spot in the Eastern Conference. Joonas Korpisalo had 29 saves.

"It can't go like it did tonight," Columbus coach John Tortorella said. "It's not one particular person, it's a team thing."

The Blues -- eyeing the last Western Conference playoff spot -- didn't show any rust, making crisp passes and winning most of the board battles.

"You can feel it," O'Reilly said. "We're making our push. I believe we're going to get in (to the playoffs). We're just going to take it one game at a time."

They even got a bit fortunate on the first goal as Alex Pietrangelo's long shot trickled between Korpisalo's legs to O'Reilly for an easy tap-in at 8:28 of the first. It was his team-leading 19th of the season, extending his point streak to seven games.

Later in the period, the Blues pinned Columbus deep with Schenn slotting a pass to Gunnarsson, who redirected the puck for his third with 45 seconds remaining.

"I felt the legs were there and we were pretty dialed in," St. Louis interim coach Craig Berube said.

Columbus cut the lead in half early in the third on a one-timer by Bjorkstrand for his ninth from Panarin in the corner. But just 31 seconds later Tarasenko made it 3-1 at 6:49 on his 18th, jamming in another puck in the crease that squeaked through Korpisalo.

"Great response," Berube said of the Tarasenko, O'Reilly and Schenn trio. "That line was really good tonight. Just getting after it right away and attacking."

Korpisalo desperately wanted a different outcome on the play.

"I kind of had it but it goes through and they score," he said. "Huge points here and it cost us the game."

Dubois got Columbus to 3-2 on a wrist shot from the left circle for his 19th with 2:37 left with Korpisalo pulled for an extra attacker. Sundqvist ended the Blue Jackets' comeback bid, scoring into the empty net with 30 seconds remaining.

Vladimir Tarasenko on his diving goal in front of the Blue Jackets' net tonight: "I don't try to do it, I just try to put it in the net somehow. It's good it works." #stlbluespic.twitter.com/TIUxWPjqKk

NOTES: The Blues are 9-4-1 on the road since Nov. 30. ... O'Reilly has three goals and seven assists in his last seven games. ... Schenn and O'Reilly picked up their 200th and 300th career assists, respectively. ... Tarasenko has 10 goals and nine assists in 16 games against Columbus. ... The 20 shots for Columbus matched their second lowest output of the season.

Blues: At Florida on Tuesday night.

Columbus Blue Jackets
share story
those were the latest stories
Want to see more?
View All Stories
Fox Sports™ and © 2021 Fox Media LLC and Fox Sports Interactive Media, LLC. All rights reserved. Use of this website (including any and all parts and components) constitutes your acceptance of these Terms of Use and Updated Privacy Policy. Advertising Choices. Do Not Sell my Personal Info