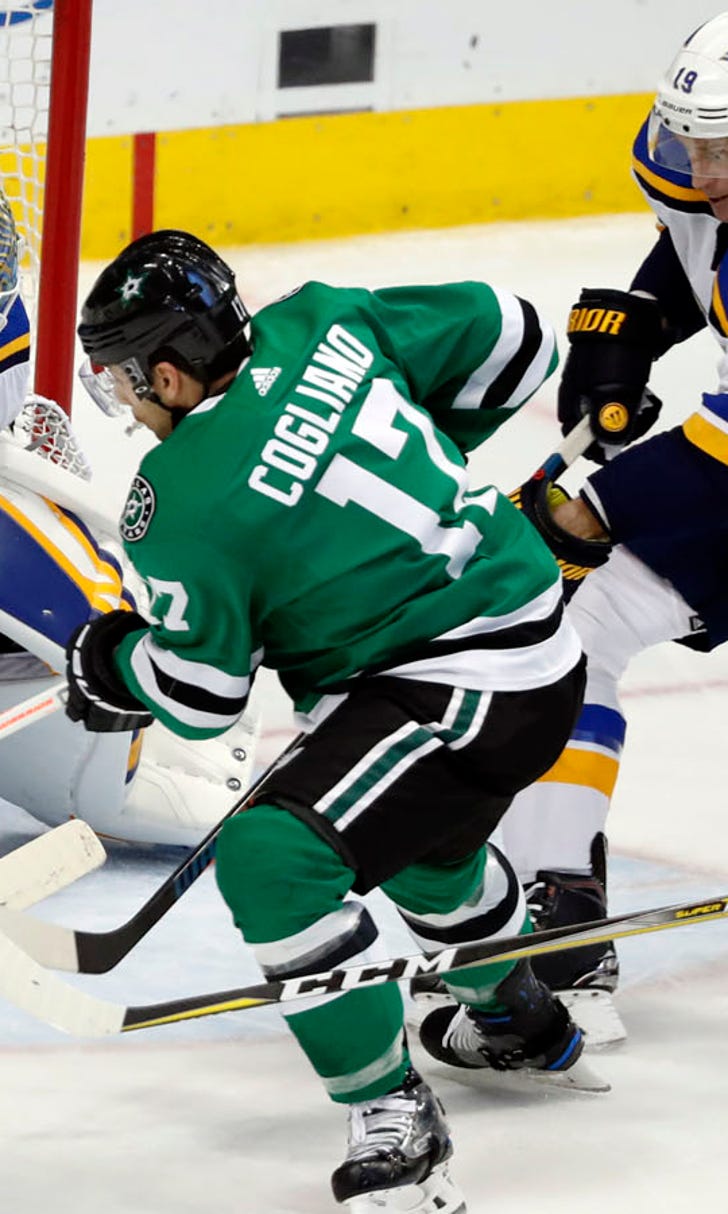 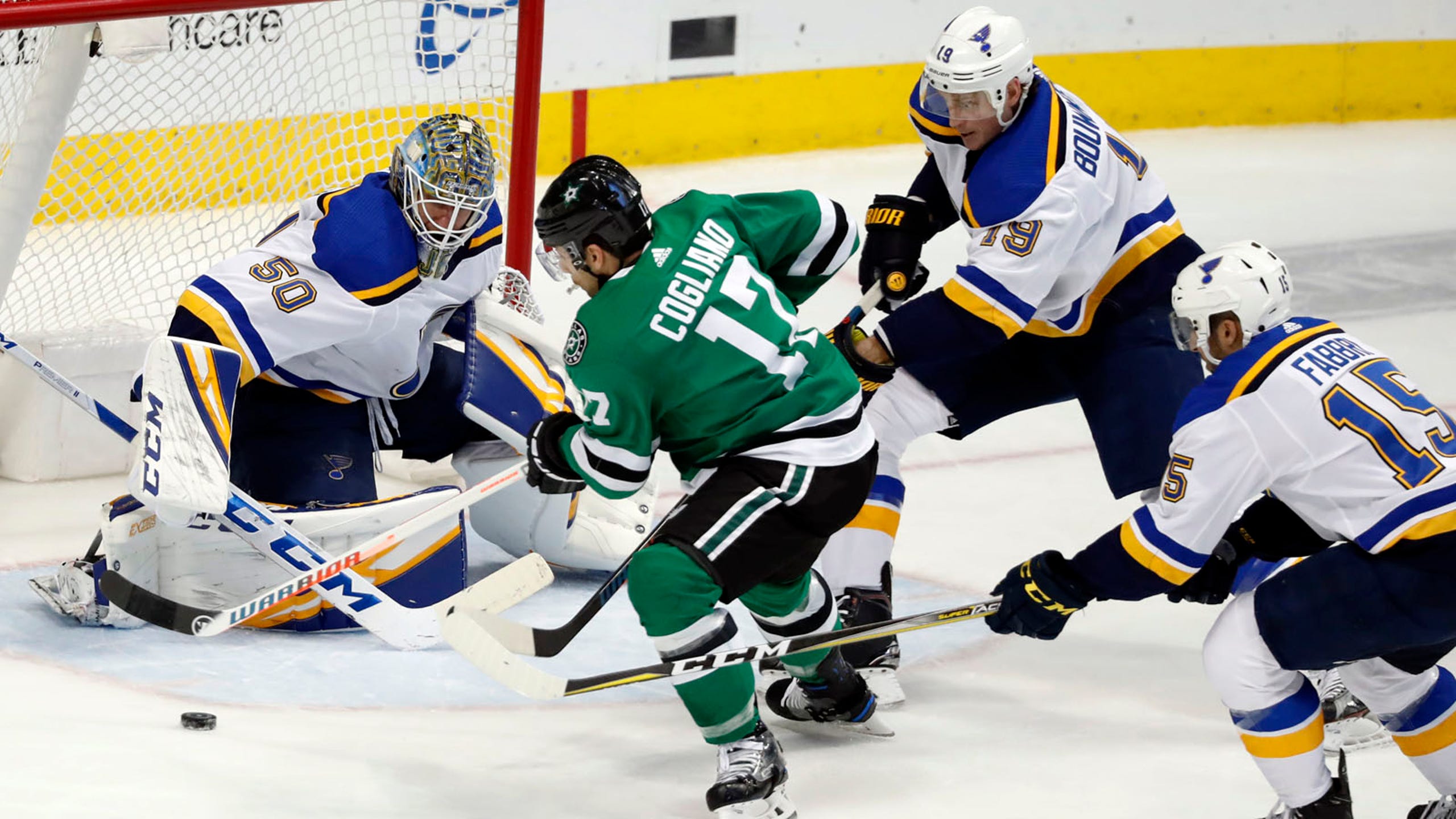 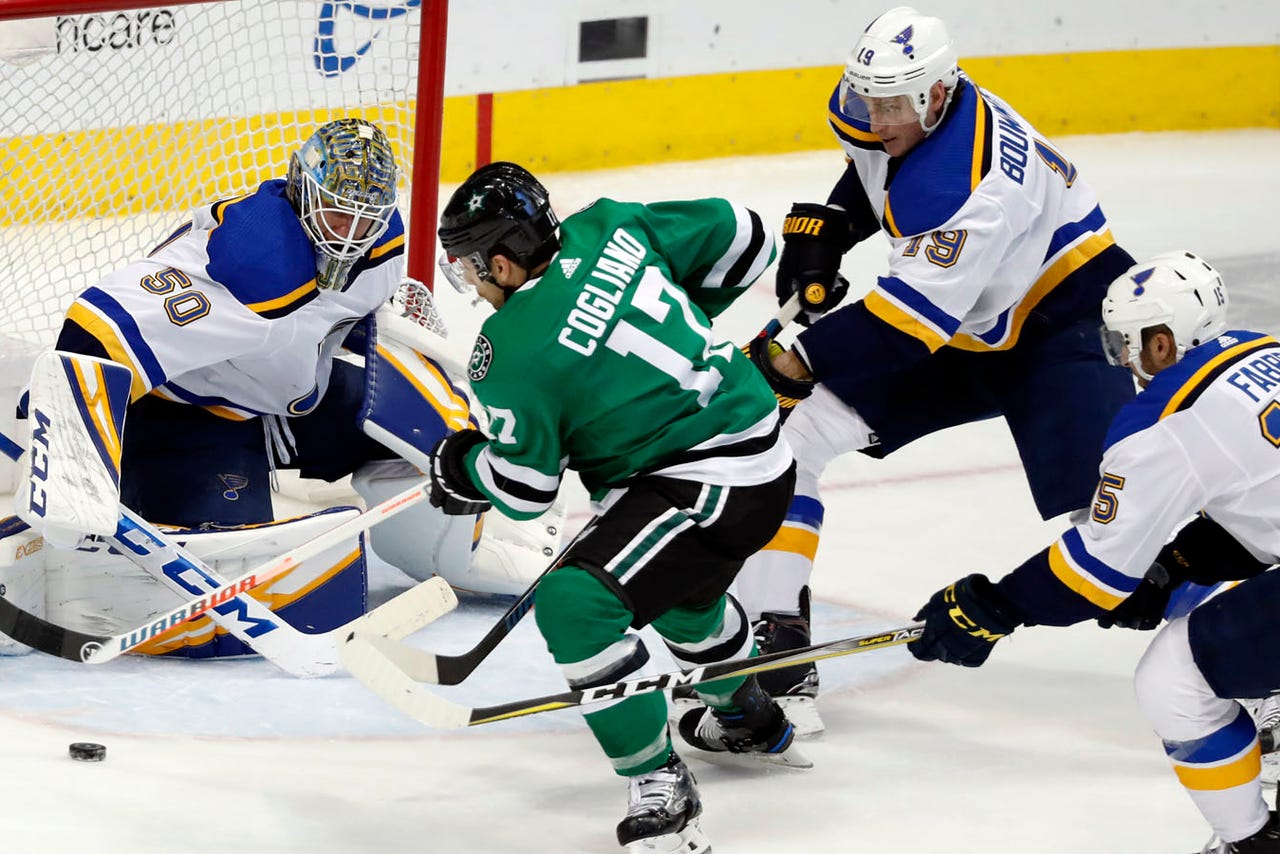 DALLAS — Stars captain Jamie Benn had his first multi-goal game since early October, and the St. Louis Blues suddenly looked much different than they had while winning 11 games in a row.

With Benn scoring two of the four goals Dallas got in a span of just more than 12 minutes in the second period, one of those redirecting a flying puck with his stick, the Stars beat St. Louis 5-2 on Thursday night to end the Blues' franchise-record winning streak.

"Frustrating. They didn't do anything special. They just high flipped it, got a couple good bounces," said Blues center Ryan O'Reilly, who had a goal and an assist. "When we do things the right way, we're successful. And you see tonight when we don't do it and we got away from staples of our game, playing heavy and being hard on all pucks and getting pucks deep. When you get away from that, it's tough to win."

Radek Faksa and Alexander Radulov put Dallas up 3-0 with goals in a 65-second span midway through the second period.

The Stars, who are currently in position for a playoff spot in coach Jim Montgomery's first season, snapped a three-game losing streak in which they were shut out twice.

"They're a good team. I can see why they've won 11 in a row," Benn said. "We found a way to come out and get to them in the second and find a way to win the hockey game and get a big two points for our team."

Blues goaltender Jordan Binnington entered the game with a 13-1-1 record and was riding a nine-game winning streak that was a rookie team record. The only other time he allowed four goals was Jan. 21 against the Los Angeles Kings, 4-3 in the last loss for him and the team.

"He deserves better from us. All the goals that are going in, it's just loose coverage," defenseman Alex Pietrangelo said. "He's been unbelievable. Again, He was good tonight, made a lot of saves when we needed him to. ... We know that we need to be better in front of him."

Binnington had 19 saves. The Stars got an empty-net goal from Tyler Seguin in the final minute, the only goal in the game not scored in the second period.

Anton Khudobin stopped 43 shots while starting his seventh consecutive game for the Stars. Regular starting goaltender Ben Bishop, who missed the previous six games with an upper-body injury, was active and on the bench as the backup after going through an optional practice Wednesday.

Benn scored his second goal of the night, and 21st of the season, when he redirected a flying puck with four minutes left in the second period to make it 4-1. His only other multi-goal game this season came Oct. 6, when he scored twice in a win over Winnipeg in the second game of the season.

Vladimir Tarasenko scored his 27th goal for the Blues on an assist from O'Reilly, who got his 24th goal of the season in the closing seconds of the second period.

"I thought the first period, the Blues were playing at a level of intensity that we hadn't seen, playoff intensity. You can see why they've been so successful," Montgomery said. "After the first period, I thought we raised our level, and our second period was excellent."

NOTES: The Blues were without C Brayden Schenn, who sustained an upper-body injury in their 3-2 overtime win against Toronto on Tuesday night. Coach Craig Berube isn't sure how long the injury will keep Schenn (11 goals, 28 assists) out of the lineup. ... Blues D Joel Edmundson broke his stick in two when he slammed it across the post following Benn's second goal. Edmundson had Benn pushed into the corner just before the score. ... Brett Ritchie of the Stars and Colton Parayko got five-minute majors for fighting after trading several hard punches in the second period.

Stars: Play their third home game in a row, Saturday against Carolina.

Dallas Stars
share story
those were the latest stories
Want to see more?
View All Stories
Fox Sports™ and © 2021 Fox Media LLC and Fox Sports Interactive Media, LLC. All rights reserved. Use of this website (including any and all parts and components) constitutes your acceptance of these Terms of Use and Updated Privacy Policy. Advertising Choices. Do Not Sell my Personal Info